Can the Central African Republic finally turn the page on decades of instability and conflict?

Rebel groups and militias have signed a new peace pact aimed at putting the horrific violence of the past few years behind them.

The Séléka, a coalition of mostly Muslim insurgent groups from the north of the country, seized power in March 2013 in a campaign marked and followed by indiscriminate killings, rapes and looting.

The rebels’ arrival in Bangui prompted the re-emergence of vigilante groups known as the anti-Balaka and led to months of clashes between rival communities.

See: Briefing: Who are the anti-Balaka of CAR?

Séléka leader Michel Djotodia declared the alliance disbanded in September 2013. But the fighters, who then became known as the ex-Séléka, dispersed into the countryside and continued to commit widespread abuses against civilians.

Djotodia stepped down the following January to make way for a civilian interim administration. Bangui mayor Catherine Samba-Panza was chosen as a non-partisan figure to see the country through to the 2015 presidential and parliamentary elections.

It’s good that the politicians have agreed to sign, but the realities on the ground are another thing.

Violence has claimed thousands of lives and persists in some parts of the country, preventing the return of some 900,000 displaced civilians, both inside and outside the CAR, and causing a largely overlooked humanitarian disaster.

The United States applauded the disarmament deal, struck during a week-long reconciliation forum in Bangui, as a "commitment to peace." But similar accords have unravelled quickly in the past and implementation will be far from straightforward. This briefing explains why:

Who signed the agreement and what authority do they have?

Of the 10 armed groups at the forum, only one, the Democratic Front of the Central African People (FDPC), led by Abdoulaye Miskine, did not sign, but that may just have been a temporary hitch, and he is not regarded as a major potential spoiler.

The other nine signatories represent all the major armed groups in the CAR, including the predominantly Muslim groups that make up the ex-Séléka rebel coalition. Importantly, the coordinator and self-styled leader of the anti-Balaka, Patrice-Edouard Ngaissona, also signed.

Most signatories were leaders of the groups’ political wings. There was dissent from at least one rebel commander.

“It’s good that the politicians have agreed to sign, but the realities on the ground are another thing,” Joseph Zoundeiko, military leader of the ex-Séléka Popular Rally for the Renewal of Central Africa (RPRC), was reported as saying after the signing ceremony.

“As for the attitude of certain officers, that’s a problem the group will solve. So it (the RPRC) stays firmly within the peace process,” he said. 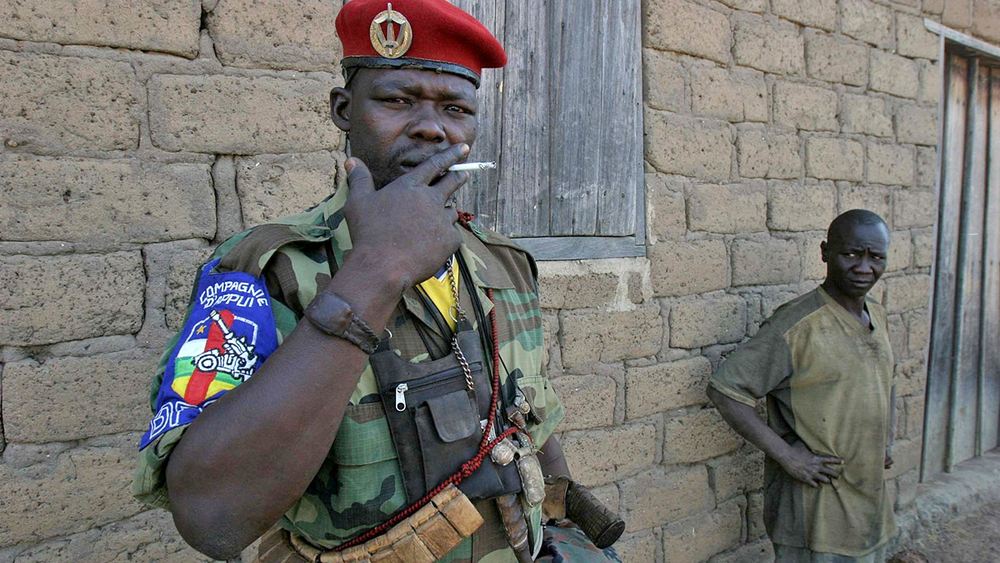 It should be noted that Ahaba joined the transitional government after his uncle Djotodia stepped down. He is therefore closer to the centre ground of CAR politics than other ex-Séléka leaders.

The other two main ex-Séléka factions, the Popular Front for the Renaissance of Central Africa (FPRC) of General Nourredine Adam and the Union for Peace in the Central African Republic (UPC) of General Ali Darassa, have more foreign fighters in their ranks.

Although they have signed up, they may be harder to corral into the process. Abel Balenguele, the signatory for the FPRC, reportedly came to blows with anti-Balaka coordinator Ngaissona a few days before the signing ceremony, while Darassa has been wary of peace talks with other factions in the past.

Encouragingly, Ngaissona, the signatory for the anti-Balaka – among the most destructive forces in the CAR during the past year – is regarded as the only effective coordinator of their operations.

Ngaissona has cultivated closer links with the international community in recent months. A diplomatic source commented that only a handful of senior anti-Balaka figures refuse to recognise his leadership, of whom only one has a significant following.

The other four signatories have smaller, local followings and pose little threat to the peace process.

What is in the agreement and what isn’t?

All the armed groups’ members must end conflict and assemble at agreed sites “within a reasonable time period” and before the elections, which are scheduled for July but likely to be delayed.

If armed, they will stay at the sites and be looked after by the government and its partners while taking part in the Disarmament, Demobilisation, Reintegration and Repatriation (DDRR) process.

If unarmed, they will be sent back to their communities and included in development schemes run by the UN peacekeeping mission, MINUSCA, and the UN Development Programme (UNDP). Any children will be enrolled in special initiatives.

Ex-combatants who want to join the army, or another part of the security forces, may be able to do so if they pass certain eligibility tests.

The alternative is community reintegration, involving “a minimum of support” and inclusion in community development programmes. Foreign fighters will be repatriated, provided they have not committed any crimes.

See: Life after combat in CAR

Unlike other similar accords, the agreement does not mention any amnesties, the release of any prisoners or any recognition of ranks within the rebel and militia groups.

Points to be clarified?

The type of weapon a combatant must present to be eligible for the process is not defined in the agreement. A diplomat told IRIN he thought it would have to be a firearm, “as everyone has a machete,” but expected some armed groups to disagree. Eligible firearms would likely include the traditional hunting rifles favoured by the anti-Balaka.

The army’s capacity to enrol ex-combatants is uncertain and will depend on a new law that has yet to be drafted.

Sebastien Wenezoui, a senior anto-Balaka commander, told IRIN his group is disappointed that a government reshuffle was not agreed at the forum. Previous dialogues in the CAR have led to new power-sharing administrations.

In addition to the DDRR process, the main outcome of the Bangui forum was the wider-reaching Republican Pact for Peace, National Reconciliation and Reconstruction. This calls for a revised constitution and the setting up of a Special Criminal Court to prosecute the atrocities committed by both the Séléka and the anti-Balaka.

How this will play out is unclear, especially as the accord did not appear to make any major concessions to the ambitions of the leaders of the various armed groups.

The International Crisis Group (ICG) warned participants ahead of the forum not to follow the example of CAR’s national dialogues in 2003 and 2008, which both led to power-sharing deals in advance of elections that soon disintegrated.

Do ex-combatants want to disarm?

The armed groups have done little fighting in recent months and levels of violence have fallen, which makes it easier for combatants to return to civilian life if they wish.

Combatants interviewed by IRIN between October and January regularly complained of a lack of rations or support from their leaders and usually said they wanted to join the army or collect a demobilisation package.

Ex-combatants who had not collected a package but were working as farm labourers said they were making more money then they had before when they spent their time manning roadblocks.

A significant proportion of ex-Séléka are foreign fighters from Chad and Sudan. They may be less motivated to engage in the process.

The RPRC’s Zoundeiko may have complained more loudly than other rebel commanders because his group consists mainly of fighters from the far northeast of the country who are trying to occupy an area where they are not an ethnic majority. This agreement could leave the group vulnerable to other warlords.

The presence of MINUSCA’s 10,000-strong peacekeeping force, plus a French contingent guarding the airport, is still critical to peace in CAR and to the disarmament process, according to the International Crisis Group. MINUSCA will soon be bolstered with combat helicopters and drones, an indication of the continuing security needs.

UN experts estimate there are something in the region of 3,500 hardcore combatants in both the ex-Séléka and the anti-Balaka ranks. A diplomat put the total number of ex-fighters that might be serious candidates for the demobilisation process at 7,000 or 8,000.

Given the almost total absence of government security forces, how to maintain control in remoter areas of the country remains a major concern.

International peacekeepers have chalked up some notable successes in recent months, which should help the process. These include the capture of Rodrigue Ngaibona, alias “Andilo,” considered one of the anti-Balaka’s most feared and powerful commanders, and a rival to Ngaissona.

The success of the process will be dependent on prompt funding.

A diplomatic source said the funds for reintegrating former fighters into the military is available, but that money for the rest of the DDRR process, including community reintegration for those not joining the army, still needs to be raised.

As the aim is to target the financial help towards whole communities where ex-combatants will reintegrate rather than simply “rewarding” individual fighters with generous packages, the programmes will have to cover far more than just 7,000 or 8,000 people.

If the economy in this country is not relaunched their efforts may be wasted.

The UNDP is proposing an initiative to train youth at risk in Bangui with the skills to become electricians, plumbers and builders for just $500 per person, or $5 million for 10,000 people. However, a contractor working on a pilot UNDP training scheme suggested this budget would allow little time for trainees to acquire real skills, and underestimated the difficulties of implementation in communities divided by conflict. The programme would also be limited to Bangui, despite the obvious need for youth employment schemes to be extended far beyond the capital.

MINUSCA and the UNDP will share responsibility for the community reintegration and development programmes specified in the DDRR agreement. Successful implementation is regarded as vital if past demobilisation failures are to be avoided.

According to the international NGOs coordination bureau in the CAR, UNDP has not so far asked for their support. A spokesman for the bureau said it is, in any case, against targeting aid solely at ex-combatants. UNDP did not reply to IRIN’s request for clarification on this point before publication.

The head of the UN Food and Agriculture Organization in the CAR, Jean Alexandre Scaglia, said last November that there was a need for consensus among aid agencies and NGOs on the issue of how far aid can be targeted at ex-combatants. So far that consensus still seems to be lacking.

Poverty and a virtual breakdown of the rural and urban economies in the CAR have been fundamental causes of the country’s recurrent crises, according to both the ICG and Scaglia.

“MINUSCA tells us each week that if the economy in this country is not relaunched their efforts may be wasted,” he told IRIN.