Every time a migrant boat capsizes on its way to Europe, a death toll is estimated by aid agencies and reproduced in media reports. But what about that other number? What about all those who die before ever setting foot on a boat? That number may be far higher.

Some 1,600 migrants have died or are missing after trying to cross the Mediterranean this year, including almost 700 who perished in last weekend’s tragedy off Libya, the worst on record.

The risks these migrants took when boarding smugglers’ boats in the hope of reaching Europe are well known, but this is only one of the many perilous steps in a journey that for many never reaches the shores of North Africa.

“Crossing the sea is just the last tiny bit,” noted Meron Estafanos, an Eritrean journalist and human rights activist who regularly listens to harrowing accounts from Eritrean asylum-seekers at different stages of their odysseys.

In 2014, Eritreans fleeing repression and indefinite military service at home made up the second largest nationality arriving in southern Europe after Syrians, according to the International Organization for Migration.

Before reaching the coast of Libya, where the majority of boats depart, many have endured kidnappings, detention, rape and torture along the way.

From the beginning, it is a journey fraught with risk.

As documented in a 2014 report by the Nairobi-based Regional Mixed Migration Secretariat (RMMS), most leave Eritrea without the required permission, which is rarely given to those under the age of 50.

If caught, the penalty can be a lengthy jail sentence, but Eritrean authorities have also been known to use a shoot-to-kill policy for people found in certain border areas.

After arriving in eastern Sudan, some register at refugee camps near the town of Kassala, while others head straight to the capital Khartoum. There they join others, including Ethiopians and Somalis, hoping to connect with smugglers who can take them across the Sahara desert and into Libya.

“The worst part is getting through the Sahara,” Estafanos, a presenter for Radio Erena, which broadcasts from Sweden into Eritrea, told IRIN. “A lot of people die of thirst; some fall off the car and [the smugglers] don’t stop for them.”

No one knows how many migrants die in the Sahara. Their deaths are seldom reported and their bodies rarely recovered.

In addition to the hazards of a desert crossing is the kidnapping risk.

In some cases, traffickers abduct Eritreans from Kassala and take them to torture camps where they are forced to phone relatives and beg for ransom money. Until recently, many were sold on to Egyptian traffickers operating in the Sinai Peninsula where they endured more torture until relatives could raise ever-higher ransom amounts.

Researchers estimate that between 2009 and 2013, as many as 30,000 people were victims of trafficking and torture in the Sinai Peninsula, and that between 5,000 and 10,000 of them did not survive their ordeal. 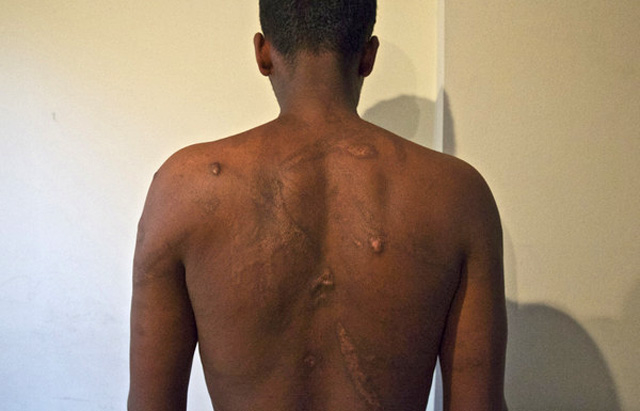 Egyptian military operations in the Sinai have destroyed many of the torture camps in the past year, but according to Estafanos, the risk of being kidnapped in Sudan is still high. During Saharan crossings, smugglers may also interrupt the journey to extort more money from migrants while holding them captive.

“It’s a similar situation to the Sinai,” said Estafanos. “They deprive them of food and water [and] rape the women. Ransom amounts have gone up to US$10,000 from about $3,000 a year ago.”

Adding to the existing threat of being held captive by traffickers is the newer threat of being kidnapped by so-called Islamic State militants. A recent video released by IS purports to show at least 30 men, said to be Ethiopian Christians, being executed on a Libyan beach.

In Libya, migrants must either take their chances with smugglers or risk being arrested and detained for months in over-crowded detention centres where Human Rights Watch has reported dire conditions and abusive behaviour by guards.

The ongoing conflict in the country has meant that smugglers and traffickers operate with relative impunity, keeping migrants in “connection houses” until they can be put on boats.

“You’re not allowed to talk. [The smugglers] decide when you eat and when you leave, even if the weather is bad,” said Estafanos.

Last week, UNHCR reported that a migrant boat rescued off the coast of southern Italy’s Lampedusa Island contained a number of burn victims. According to survivor accounts, a gas cylinder had exploded in one of the connection houses, killing several people and injuring others. Rather than get medical help, smugglers loaded the injured onto a rubber dinghy.

According to Estafanos, a second dingy containing burn victims was stopped by soldiers before it set off and the group of 87 migrants is now being held at an unknown location on the coast until they can pay $600 to secure their release.

“Their burns are very severe and they haven’t been treated,” she told IRIN. “At night, they phone me but their batteries are running out, and their families have been calling me.”

Estafanos insists that Eritrean asylum-seekers know the risks when they make the decision to embark on the journey to Europe, but view the alternative - remaining in Eritrea - as worse.

“In Eritrea you’re alive, but it’s like you’re dead. Your life is decided by the government. Until you’re 50, you’re going to be in the military. Anything you say can land you in prison and there are so many informants. There is no freedom of movement, speech or religion. You can’t even decide what you want to study.”

Efforts by researchers to better trace and monitor the routes and risks taken by migrants from the Horn of Africa to the shores of Libya are still at an early stage.

RMMS is about 10 months into a project dubbed 4Mi, which is training local informants in hotspots along migration routes to supply data on smuggling activities and risks for migrants.

“The accumulation of informants has been slow and not trouble-free,” said Christopher Horwood, who is coordinating the project for RMMS. “We have sporadic information from some places and not a consistent coverage of routes from start to finish.”

One 4Mi informant in Egypt, another popular transit country, noted that: “migrants are facing a lot of problems during the journey.

“Since they come by smugglers, it's very difficult for them to even breathe as they like. [Smugglers] ask for additional money after reaching the desert. If they don't pay there is a lot of things happening to them like rape, torture.”