I will support your work.
KIRKUK

Yahyawah is a muddy, tented settlement to the southeast of the Iraqi city of Kirkuk. Wedged between the borders of semi-autonomous Kurdistan and the front line of the so-called Islamic state (IS), it is in a geopolitical no-man’s land.

Its current residents - members of the large Turkomen minority who fled the Tal Afar area, west of Mosul, when IS attacked it in June last year – say they feel stranded. They cannot return to their villages as they have been overrun by IS militants, nor are they being allowed into Kurdistan, and the proximity of IS means most of the rest of Iraq is also out of reach.

They are among a growing number of displaced Iraqis who accuse the Kurdistan Regional Government (KRG) of refusing them sanctuary in the relative safety of Kurdistan.

Wida Khadr Uthman says her husband was killed when IS members attacked their village. Since then the 40-year-old mother of two has been trying to get to Turkey via Kurdistan, but she says she’s been repeatedly turned back.

“It’s all politics. There’s a checkpoint there, and they don’t help us,”
she said, pointing towards Kirkuk. “I don’t know if we’re banned, but
they’re not letting us in.”

Hassan Issa told IRIN he has tried to take his four-year-old daughter
Aaliyah, who suffers from a birth defect caused by the buildup of fluid
on the brain, to hospitals in Kurdistan, but has also been turned back
at the border.

He said even if they can’t stay in Kurdistan, maybe he would be able to reach Turkey and find his daughter medical care there.

Iraqi Turkoman Ikram Jasim Mohamed, 34, from Tal Afar. He is now an IDP at Yahyawah near Kirkuk, Iraq. Here he holds up a police ID. He says he tried to get with KRG but was turned away. “I went to the military base, and I showed them my police ID c 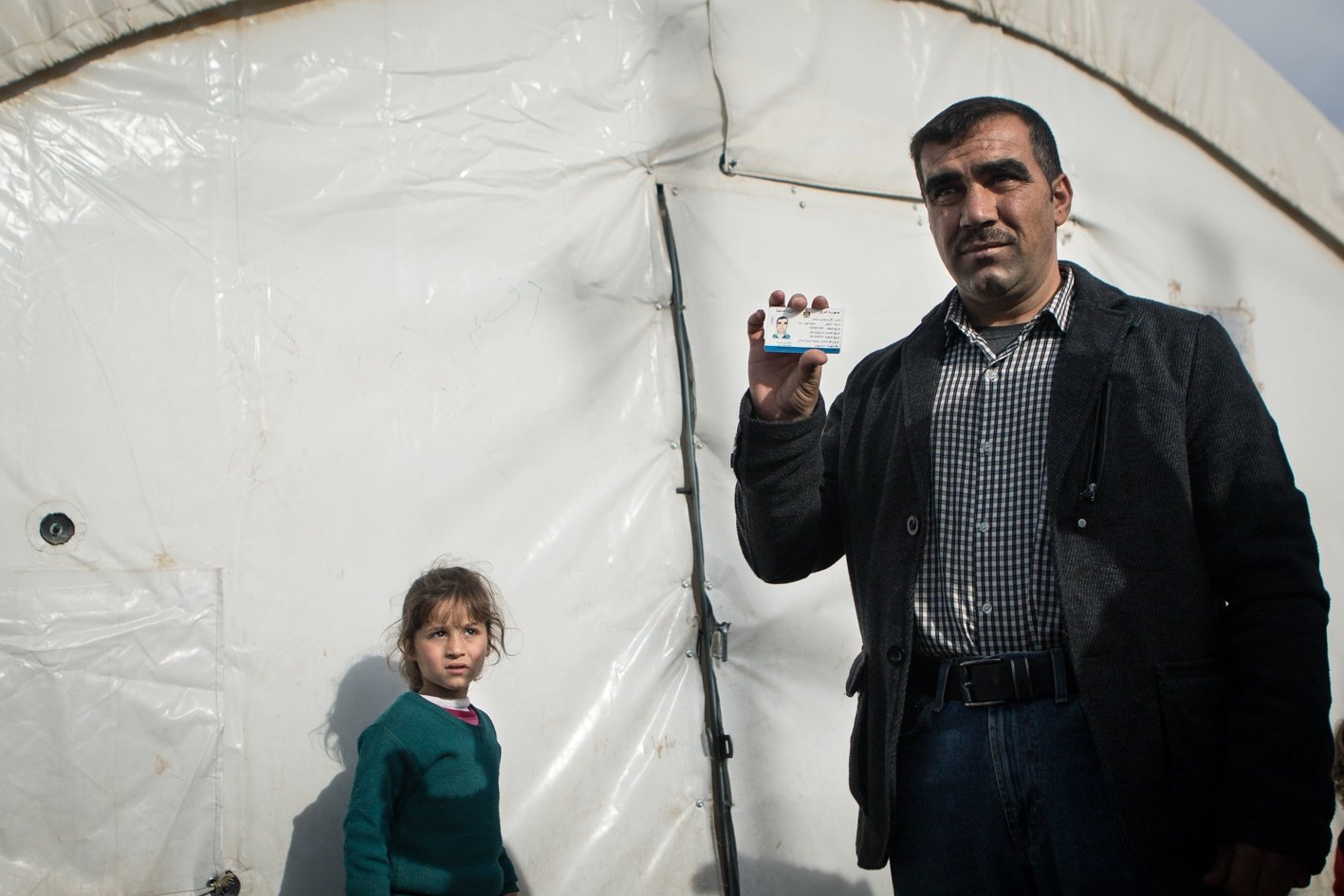 “They are afraid the Turkomen are IS,” Issa explained, as he sat beside his daughter in his airless tent. The camp’s residents don’t want to go south to Baghdad because IS controls the cities of Samarra and Tikrit to the immediate south and they worry the roads are too dangerous to pass.

In August last year, the town of Amerli in Salahadin, most of whose 12,000 residents are Shiite Turkomen, was subject to an IS siege for more than two months before Iraqi security forces broke the stand-off.

Christine van den Toorn, director of the Institute for Regional and International Studies at the American University of Iraq, Sulaimani (AUIS), told IRIN: "The Turkomen have received a really raw deal in all of this… and have really fallen through every crack.

“Because of where the Turkomen were located geographically when the IS raids happened, most of them weren’t really protected by anybody; the Iraqi security forces left and the Kurdish Peshmerga only protected to an extent,” she explained.

Van den Toorn said she wasn’t surprised to hear Turkomen were struggling to get access into KRG areas and noted that the post-2003 alignment of Shiite Turkomen with Baghdad, the home of federal Iraq’s Shiite-led government, had upset the Kurds.

“The Kurds may talk about how they have Turkomen in their parliament, but the Kurds and Turkomen will not share power and at the end of the day, they are fighting for territory in [the city of] Tuz Khormato and they don’t trust each other,” she said.

The Turkomen are not the only group of internally displaced persons (IDPs) struggling to get into Kurdistan to seek refuge there.

According to reports from the UN Office for the Coordination of Humanitarian Affairs (OCHA), Sunni Arab IDPs have also been blocked from passing through various Kurdish checkpoints and some evicted from Kurdish residential areas.

The sparsely-equipped clinic at Yahyawah IDP camp near Kirkuk in Iraq. the clinic is only staffed on some days and provides just basic painkillers and antibiotics. 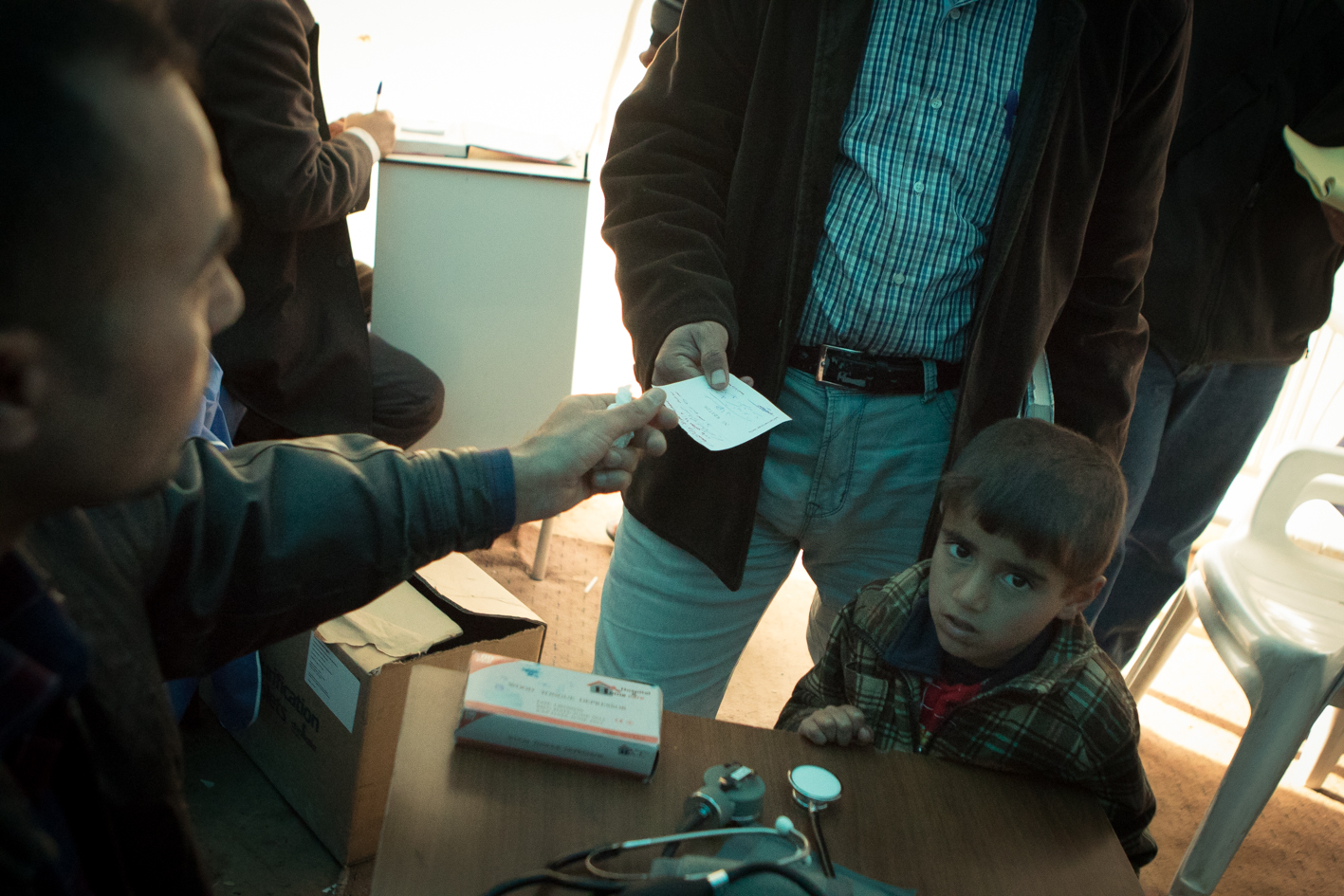 “Over 20 IDP families in Kirkuk from Diyala Governorate were evicted from their houses and escorted to the Kirkuk border in early January,” noted a report published on 30 January, adding the families had been living in Kirkuk since 2006, and that earlier that month another 170 families were threatened with eviction.”

Kirkuk has long been a source of tension between Erbil and Baghdad who both contest ownership of the city. During the rule of Saddam Hussein, large numbers of Arabs were moved into Kirkuk, under a process that came to be known as ‘Arabization’, but since 2003, the Kurds have been trying to claim back a city they often refer to as their “Jerusalem.”

The IS advance has helped the Kurds because it pushed back Iraqi police and security forces, allowing the Peshmerga, the armed force of the KRG, to claim more of Kirkuk. Frontlines however remain fluid, and in late January militants from IS launched a surprise attack on the city and its surroundings, leading to fierce fighting.

The KRG proudly defends its strict border policy, saying it needs to protect itself from the violent attacks that plague the rest of Iraq, but aid agencies have raised concerns about the barring of vulnerable people and in particular on ethnic lines.

According to the UN’s Guiding Principles on Internal Displacement, all IDPs should have freedom of movement within the borders of their country, regardless of their ethnic or social origin.  Although Kurdistan is part of Iraq, it has applied its own border controls and access rules.

Abdirahman Mohamad Issa, assistant representative for operations for UN Refugee Agency (UNHCR) in Iraq, agreed that in some cases non-Kurdish IDPs had been turned away from Kurdish checkpoints.

“Security is a major concern given the current environment,” he told IRIN. “I’m not sure if it’s official policy, but previously at certain checkpoints they were being denied.”

But he stressed the KRG had been very generous given its own limited resources.

From the beginning of January 2014 to the end of last month, the International Organization for Migration (IOM) has identified 2,255,148 IDPs, dispersed across 2,412 different locations in the country.

The Kurdish province of Dohuk is home to nearly half a million IDPs, with nearly the same numbers again in Erbil and Sulaymaniyah, most of whom are sheltering in tented camps and informal settlements.

Kirkuk has more than 330,000 IDPs from across Iraq, including many from Anbar, where IS-affiliated militants entered Iraq from Syria at the start of 2014, making their initial raids there before moving up into Mosul and across into Saleheddin.

The Yahyawah camp, set up by Turkey’s Disaster and Emergency Management Agency (know by its acronym AFAD), is currently home to between 780 and 1,700 people, depending on whose numbers you believe. It has received some supplies from UNHCR and the UN Children’s Fund (UNICEF) but residents have mostly relied on local support and Ali Mahdi, of the Turkomen Front, a political party representing the minority group, oversees it.

There are some formal structures there, including a washing block and a tiny sparsely stocked clinic, and the camp does have access to power-lines, but most families live in communal tents, many made from plastic sheets and covered with blankets for warmth.

The Turkoman mayor of nearby Laylan, Mohamed Wais Ali Rith, said his community had supplied the Yahyawah settlement with food, water and basic supplies. But he said Laylan, a town of 14,467, was giving as much as it could and was already hosting its own IDP camp with nearly 10,000 IDPs.

“Where would they go?” Rith said. “We have no places to put them.”