A decade after the Indian Ocean tsunami devastated Aceh, the isolated tip of Indonesia’s Sumatra Island on the morning of 24 December 2004, IRIN looks at the unprecedented aid response, its impact on the industry, and how local people continue to be affected.

“The way the international community responded to the tsunami raised the bar on what was possible for humanitarians to do,” said Jan Egeland, then UN undersecretary-general for humanitarian affairs and emergency relief coordinator at the Office for the Coordination of Humanitarian Affairs (OCHA).

Two days after 9.1 Richter scale earthquake 240km off of Indonesia’s coast triggered the tsunami, Egeland held a press conference in Geneva. “I was planning to be critical of the lack of contributions that year. It was a year of many disasters and very little money,” he told IRIN, pointing to floods in Bangladesh, and the ongoing crisis in Darfur, the humanitarian response for which had fallen US$140 million short that year.

“It is beyond me why are we so stingy,” Egeland was reported as saying, prompting an outpouring of criticism from donor governments. But the remark was taken somewhat out of context, Egeland said. “The famous ‘stingy’ remark I made was planned before the tsunami. I was hoping that because it was the end of the year, and around some major holidays like Christmas, it would inspire donations for the many ongoing crises around the world,” he explained. “It ended up having an amazing beneficial effect with the tsunami donations.” According to the 2005 World Disasters Report, “media coverage of the… tsunami dominated headlines worldwide well into January - much longer than any other disaster in modern history.”

The Indonesian government said the tsunami caused an estimated $4.45 billion in damage and loss in their country alone (it also struck badly in Sri Lanka, Thailand, and the Maldives). Within three years of the disaster, nearly $8 billion had been pledged to Aceh’s reconstruction and $6.4 billion disbursed across almost 500 aid organizations that sprang into operation. “The tsunami response, just by the fact that it ended up needing so many staff, was the first international mission for a lot of humanitarians,” explained Joy Singhal, who worked for the British Red Cross in the response. “It is part of the personal and institutional memory for the industry.”

The human toll was staggering: 167,000 Acehnese were confirmed killed, with tens of thousands more missing - one in four citizens of the province vanished.

A survivor shares a family photo of those he lost in the Asian tsunami when it hit Meulabboh, West Aceh (file photo 2004) 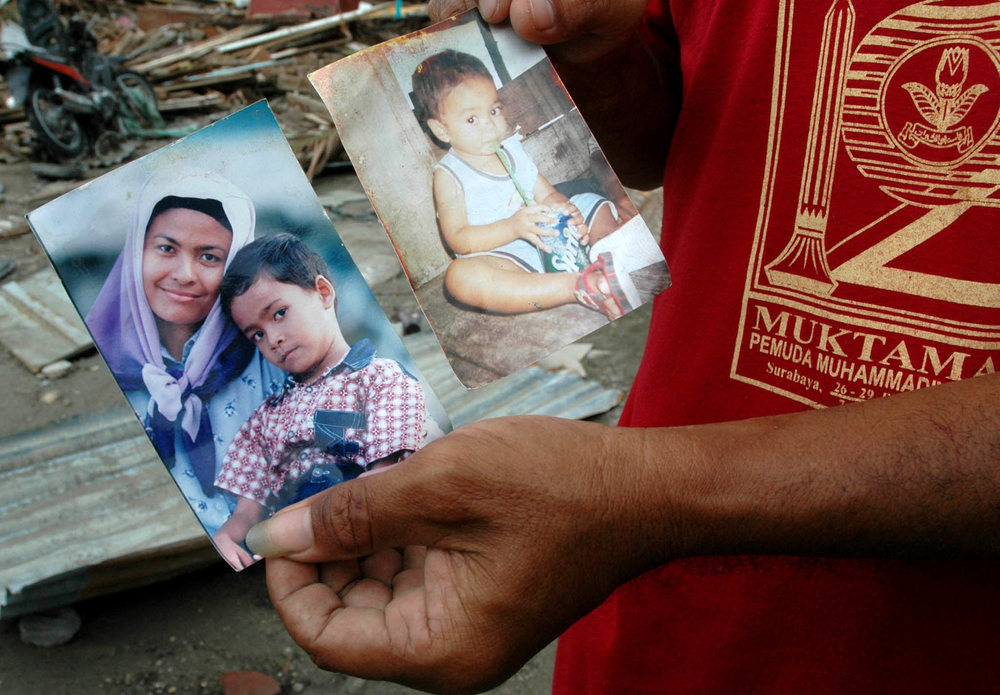 “When I arrived, there were bodies stacked up on the side of the roads like logs,” said Michael Bak, who at the time worked for the US Agency for International Development (USAID) in Jakarta and was one of a very limited group of foreigners allowed into Aceh in the early 2000s. “The air smelled like corpses for weeks.”

Survivors helped neighbours search for loved ones; groups gathered at mosques and university buildings that remained standing. “At one mosque, we used charred wood to draw a map on the wall,” said Hermanto Hasan, who worked at the People’s Crisis Centre, a volunteer organization. “When groups went out, we told them to count people and take names, then when they returned we marked it so everyone could know.”

Aceh had been the scene of a nearly 30-year conflict between the Free Aceh Movement (GAM) and the Indonesian military (TNI). Lifting a harsh military emergency law, Jakarta opened the province to international agencies within days of the disaster.

In subsequent weeks and months, the onslaught of aid came in varied forms. “There were scientologists here giving massages in IDP [internally displaced persons’] camps, tourists who came over from Bali to help,” said Rina Meutia, who was a student in Banda Aceh, the provincial capital, at the time. “They were all really friendly, and a lot of Acehnese people hadn’t interacted with foreigners, so distinguishing between them and a big agency with plans and pledges and surveys wasn’t really something that was natural.”

By March 2005, it was clear that the scale of operations in Aceh required special coordination. Indonesia’s president appointed a charismatic and capable former minister to run the Agency for the Rehabilitation and Reconstruction of Aceh and Nias (known by its Indonesian acronym, BRR). That leader, Kuntoro Mangkusubroto, immediately disagreed with President Susilo Bambang Yudhoyono’s vision for the agency, and demanded greater flexibility. 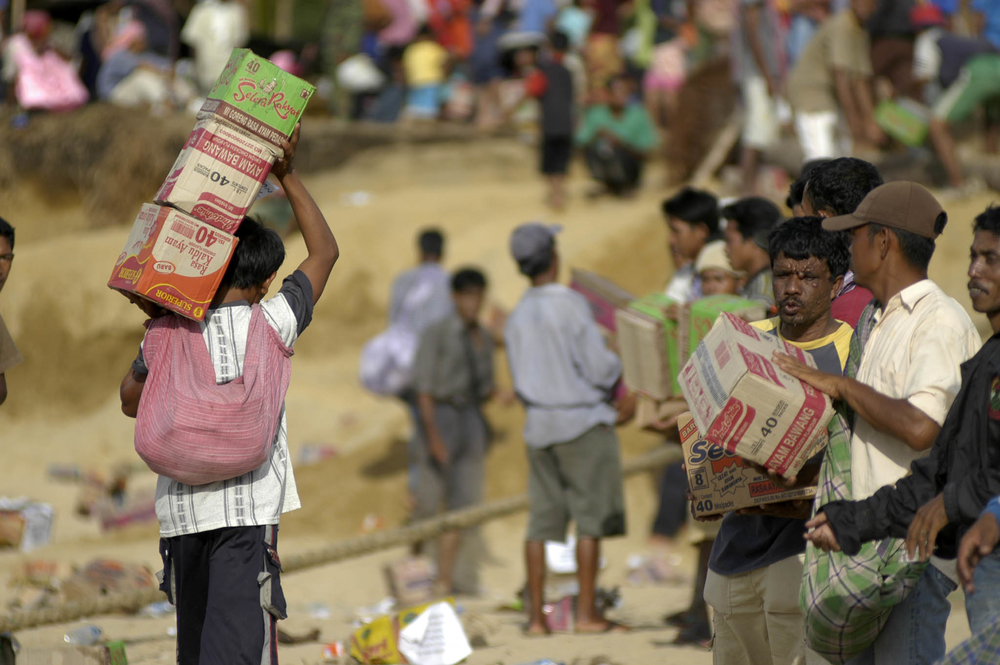 Lilianne Fan, a research fellow with the Overseas Development Institute’s Humanitarian Policy Group, explained that Kuntoro thought reconstructing Aceh would take a degree of flexibility Jakarta was initially uncomfortable with. According to Fan, such a “blank cheque”, combined with donor enthusiasm, allowed the agency (BRR) “not just to provide emergency relief to Aceh, but also to support Indonesia’s long-term political reform and development.” She noted: “At the time of the tsunami, Indonesia had a reputation as one of the most corrupt countries in the world.”

The reconstruction process experienced a range of complications. The magnitude of the response attracted attention to anti-corruption measures amid concerns that aid agencies, many of them flush with cash, were projecting dishonest portrayals of the needs on the ground as part of continuing fundraising efforts.

The Indonesian government, which led the relief effort, carried out more than 5,000 of its own reconstruction projects while coordinating more than 12,500 other projects involving more than 60 bilateral donors and multilateral agencies, as well as roughly 700 NGOs. According to The Asia Foundation, coordination issues plagued nearly every sector of the response.

Nevertheless, Kuntoro’s diligence paid off. A 2008 analysis by the Washington-based Brookings Institution noted that, in Aceh, aid money was being distributed to agencies and projects more quickly and efficiently than in many other natural disasters. “Build Back Better” became the iconographic phrase associated with the recovery effort, gesturing at the local and international vision that there was immense potential to improve Aceh.

In addition to pushing innovation, the tsunami response forced contemplation among humanitarians. The sheer amount of funding and the pressure to implement interventions in stride with the aid also meant humanitarians were faced with challenges on a scale the industry had never seen before.

In some cases, logistical challenges demanded new measures, and the high level of funding allowed it: Oxfam leased cargo helicopters for the first time to deliver aid. In another example, over $1 million per month was being disbursed at some points through cash transfers to tens of thousands of disaster victims.

“There had never been that much money,” said Moira Reddick, who coordinated the emergency response for the British Red Cross. The UK’s Disasters Emergency Committee, which raises crisis funds for 13 agencies including the British Red Cross, had launched a tsunami appeal on 29 December that ended up raising a record £392 million.

“It was a whole new league of pressure because of the amount of money - there was no absorptive capacity,” she explained, adding that “it wasn’t donor money in the way that donor money normally comes - money that has been negotiated within an institutional framework. There is always a moral imperative of course to spend any money as well as possible but this highly visible money had been raised by the public and we [had] to spend it by an artificial deadline.”

Reddick said staff argued internally that the agencies should go back to the public and ask if some of the money could be shifted to Darfur. The answer from agency leadership was no. “The artificiality of it all drove us even further along mission creep into recovery. Suddenly organizations that specialize in saving lives were building houses, because there is no other way to spend money on that scale,” she said. 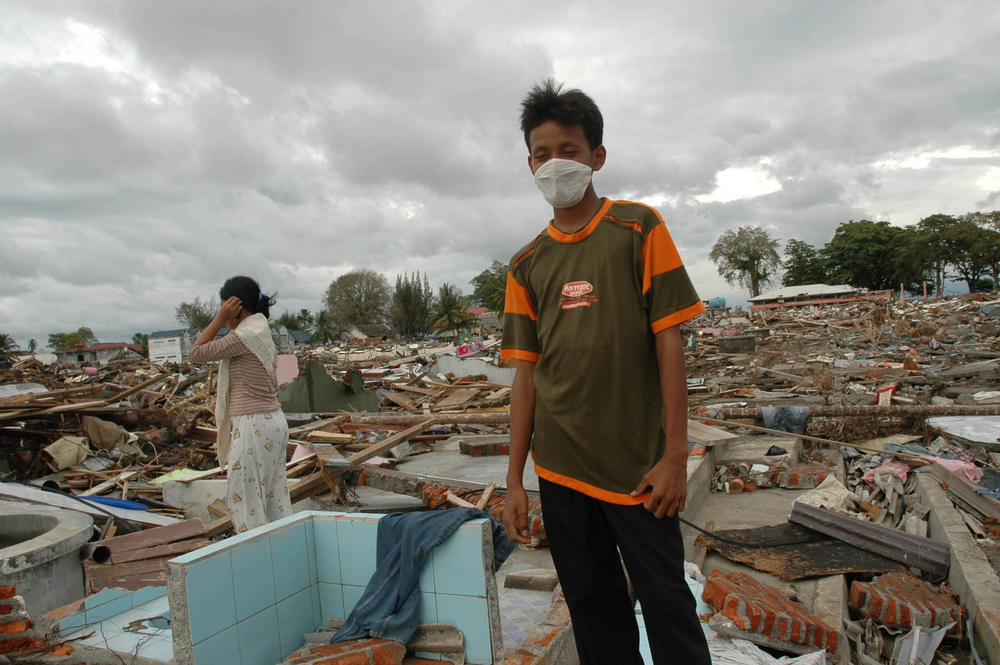 Many well-known humanitarian practices today were sparked, or brought to scale, in the tsunami response. “A lot of the questions we were grappling with at a conceptual level in Aceh are now clear policy and protocol,” Singhal said, offering cash transfers as an example.

“Cash transfers in emergency response were relatively new, especially at that scale, during the tsunami response,” explained Singhal. “Today we have CaLP and an entire sector dedicate to understanding how cash can and should and does work,” he said, referring to the Cash Learning Partnership, a consortium that “originated from the will to gather lessons learnt from the emergency response to the Indian Ocean Tsunami in 2005” led by Oxfam, the British Red Cross, Save the Children, the Norwegian Refugee Council and Action Against Hunger.

The tsunami devastated Aceh’s political infrastructure as well: Over 3,000 civil servants were confirmed dead and more than 2,000 never found. Recalled Bak: “In one village near Lampung, we were late to arrive and the village meeting had started already - it was all teenagers. I whispered to a colleague to ask where all the adults were. She explained that they had all died, and the children were now the leaders.”

Some feel the humanitarian response departed too abruptly, depleting Aceh of much-needed support as it navigated new post-conflict political waters. The 2008 Brookings analysis concluded that “the issue of transitioning from the reconstruction phase to the development phase requires further study.”

That transition has been fraught: Provincial politics have struggled to stabilize, despite peace. Aceh’s human development indicators are lagging, and in some cases even dropping.

In a 2014 report, the Jakarta-based Institute for the Policy Analysis of Conflict (IPAC) noted that recent years “have not brought much tangible improvement to the lives of ordinary Acehnese, poverty remains endemic, and corruption is rife, as is extortion by former Free Aceh Movement commanders of local businesses and public works projects.”

Saiful Mahdi, who runs the International Centre for Aceh and Indian Ocean Studies (ICAIOS), a research institute in Banda Aceh, said the emergency phase brought visible changes to Aceh quickly, but that physical devastation captured most of the energy (and funds) in recovery efforts and mature governance has been slow to develop.

“Because of the martial law and the TNI-GAM relationship, distrust was rampant and authority in post-disaster and post-conflict Aceh has been quite performative,” he said, pointing to tussles over whether the GAM flag can be flown at government buildings, and bursts of Sharia (Islamic law) policing in recent years.

According to Mahdi: “The capacity to govern in the aftermath of the conflict and the disaster is weak, so one political solution has been to institute harsher and harsher punishments or laws to keep everyone in order.”

He lamented: “It makes not so much sense when the government hasn't shown it can even manage the laws it currently has.”