Diminished agricultural production and unhealthy imports are contributing to some of the world’s highest obesity and diabetes rates in the Pacific Islands. Thousands of kilometres away from this backdrop, high-level officials are gathering for the only second-ever global nutrition conference in Rome, starting 19 November, to consolidate agreement on an international framework to improve nutrition.

Six out of the 10 countries with the world’s highest diabetes prevalence are in the Pacific Islands, according to the Belgium-based International Diabetes Federation. In Fiji, two people undergo limb amputations almost daily due to the disease, according to local media.

“Non-communicable diseases [NCDs] have been declared a crisis for the Pacific. Most of it is [due to] the food environment where people live, where there are just not many healthy options,” Peter Sousa Hoejskov, a technical officer for food safety and non-communicable diseases with the UN World Health Organization (WHO) based in Suva, Fiji’s capital, told IRIN.

Warning signs for NCD are mounting: According to WHO, in at least 10 out of 14 inhabited Pacific island countries where health data is gathered, more than half the population is overweight.

Residents in 14 Pacific island countries and five nearby “territories” who used to consume home-grown foods like root crops, or other locally-produced foods, have over the past decade increasingly turned to low-cost, low-nutrient, processed foods imported from abroad.

Some 27 percent of the food consumed on Vanuatu Island is imported; the figure goes up to 91 percent in the Marshall Islands.

With agriculture yields on the decline, high-sugar and high-sodium packaged goods have become the “new staples”, said Hoejskov.

“The soil here is not good for farming. Luckily we have the shop nearby so we can buy instant noodles and rice. My son eats [instant noodles] almost three times per day,” said Sarah Tareoha, a mother of eight living in Marau, the eastern part of Guadalcanal Island in Solomon Islands.

The traditional staple sweet potato has 55mg of sodium per serving and negligible fat; one serving of instant noodles has 1000mg of sodium and is 20 percent fat.

According to a 2012 Secretariat of the Pacific Community (SPC - an intergovernmental organization made up of 26 nations) vulnerability analysis, “significant pests and disease, combined with reduced soil fertility, are among the many factors impacting agriculture production in the communities.”

While agricultural data is generally scant for this part of the world, community testimony abounds.

Yams and sweet potatoes in Isabel Province of Solomon Islands typically took three months from planting to harvest, with nearly all planted seeds yielding crops, but now, villagers say, they take at least five months, and less than half a planted field bears fruit.

According to FAO, “declining competitiveness of farmers and fishers in the Pacific islands has reduced their capacity to supply both export and domestic markets at competitive prices.”

A principal driver of the consumption of unhealthy imported food, said Hoejskov, is that healthy, domestically-produced food is neither plentiful nor cheap enough to compete with low-priced imports, and the time needed to deliver local perishables to isolated islands - up to a week by plane, boat, and truck - is too long for them to survive.

Subsidizing the local production of fruits and vegetables can be one solution, said Hoejskov.

In Honiara, the capital of the Solomon Islands, IRIN found that while a packet of instant noodles costs 26-70 US cents, locally grown cassava or sweet potato tubers cost 21 times that amount.

The damage of disease

Children in the Solomon Islands 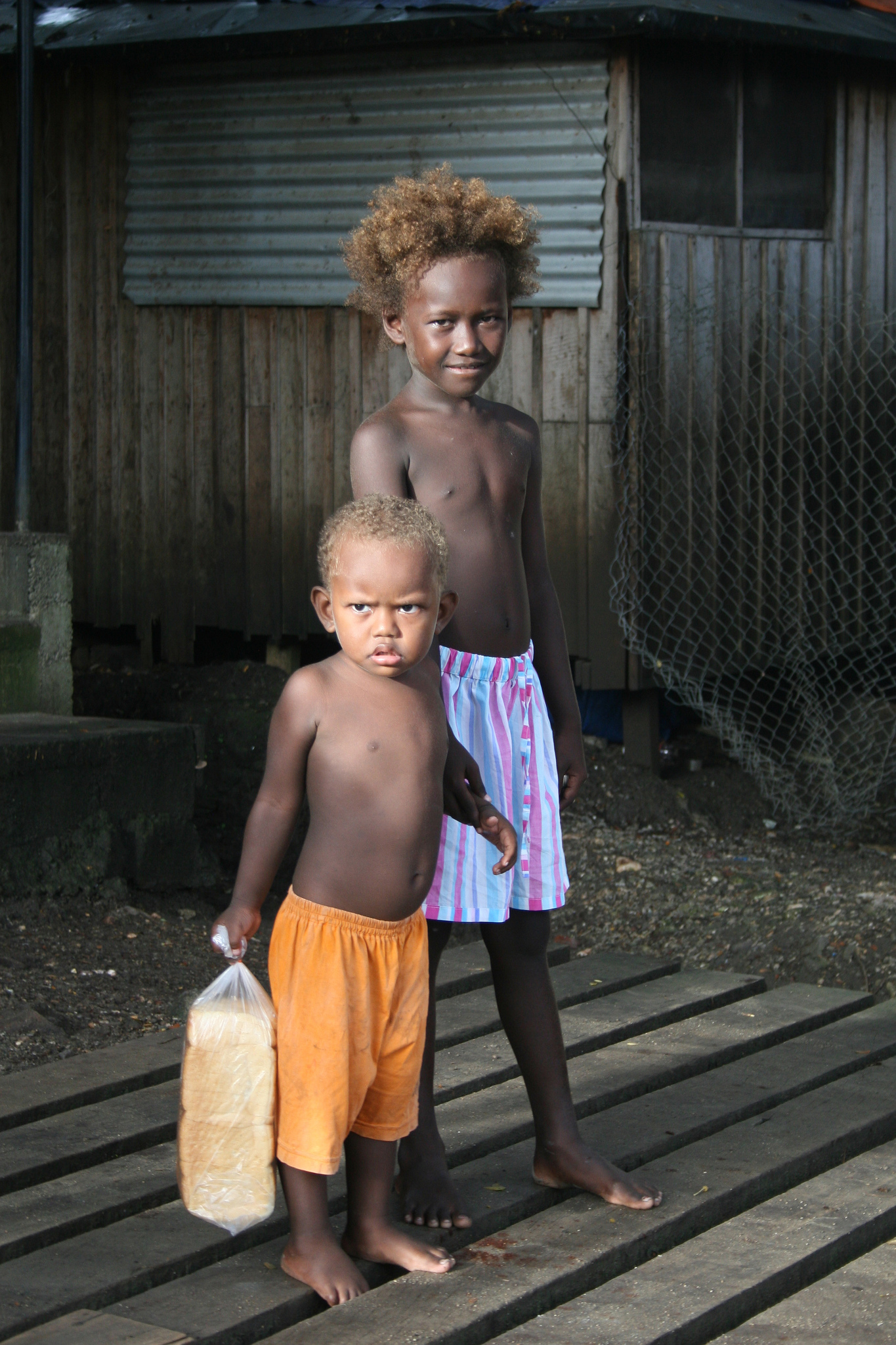 If current trends continue, the NCD burden - which now accounts for 70 percent of all deaths in nine out of 10 Pacific countries that have collected mortality data - will increase, warn experts.

“The youngest person to come to the clinic with diabetes type 2 was only 11 years old,” said Kama, a Fijian nutritionist.

But others say the problem is broader.

Experts point to a number of needed policy shifts.

Fiji, French Polynesia, Nauru, and Samoa have increased taxes on sugary soft drinks in the past decade, but it is still too soon to measure any health impact, noted WHO.

The economic interests behind the food industries from countries exporting to the Pacific Islands make prohibitions on products deemed unhealthy difficult, according to Hoejskov.

For example, when Samoa tried to block turkey tails (a popular but gristly meat cut made up of 42 percent fat) from the US in 2007 for health reasons, the US brought the case before the World Trade Organization (WTO) and in 2012, the WTO gave Samoa 12 months to eliminate the ban in order to remain a member. By May 2013, turkey tails were back on the Samoan table.

Similarly, in 2004, Tonga's Ministry of Health campaigned to ban mutton flaps - the 50 percent fat sheep belly offcuts generally used for dog food in the exporting country, New Zealand - which had become a major staple in Tongan households. But Tonga's pledge to join the WTO eventually trumped health concerns, and policies were scrapped by the time it finally joined in 2007.

“Emerging threats [include] the new and controversial dispute chapters in international trade agreements such as the Trans Pacific Partnership (TPP) for the [food] industry to circumvent government’s sovereignty to enforce health and environment protection policies.”

Governments have tried to fight back.

“The Pacific region should not be treated as a dumping ground for unhealthy products that are unwanted in other countries,” declared governments in a statement concluding a Pacific sub-regional workshop in Fiji in 2013 on trade and NCDs.

WHO has recommended Pacific governments not allow more than 1600mg of sodium per 100g of instant noodles and 400mg for a similar amount of bread.  Kiribati and Vanuatu are developing national food legislation with salt targets in early drafts, according to WHO.

“Most imported options are unhealthy, but at least governments can make sure that the products people buy comply to a certain level of healthiness... Hopefully, it won't take long to have regulations in place,” said Hoejskov.