For years, the images most commonly associated with refugees have been of sprawling, dusty camps populated by rows of tents sheltering thousands of men, women and children with little to occupy them besides queuing for aid handouts.

The reality is that only just over one third of the world’s 17 million refugees live in camps today. The rest choose to live in cities or communities where a more independent, if precarious, existence is possible.

The international humanitarian community has been slow to respond to this reality, but is now scrambling to catch up, especially in view of the crisis in Syria which has so far produced over three million refugees, the majority of whom are living in cities in neighbouring countries.

The UN Refugee Agency (UNHCR), in particular, has struggled to adapt its traditionally camp-based model to fulfil its mandate of ensuring that all refugees have access to protection and assistance, wherever they may live.

In 2009, it released a policy statement on refugee protection and solutions in urban areas which recognized urban areas as “a legitimate place for refugees to enjoy their rights”.

Now it has gone a significant step further with the release of an “Alternatives to Camps” policy which commits the agency to actively pursue alternatives to camps whenever possible. It is the first official recognition by UNHCR that camps should be a last resort rather than the default response to refugee influxes, and has been widely welcomed by the refugee rights community as representing a major, if overdue, shift in the agency’s approach.

Between the UNHCR’s establishment in the early 1950s and the installation of its current High Commissioner Antonio Guterres in 2005, “there was a widespread assumption within the humanitarian community that refugees belonged in camps,” according to Jeff Crisp, formerly the agency’s head of policy and evaluation, writing in a blog for advocacy group Refugees International, where he now serves as senior director for policy and advocacy.

Keeping refugees in camps has not only been logistically far more convenient for aid providers, but has often been the preference of host states who view camps as minimizing both the perceived security threat posed by refugees and their burden on local communities and economies. However, as refugee crises have become more protracted, with over six million refugees now living in exile for five or more years, camps have become increasingly difficult to fund.

“A lot of funding goes to new emergencies but within as little as 18 months, if the emergency is not continuing, there’s a falling away of donor support,” said Steven Corliss, director of UNHCR’s programme management and support division. As support diminishes programmes such as secondary education are the first casualties, but eventually even basic services come under pressure. Recently, the World Food Programme had to cut food rations for a third of all African refugees, the majority of them long-term refugees confined to camps.

Refugees – in and out of camps 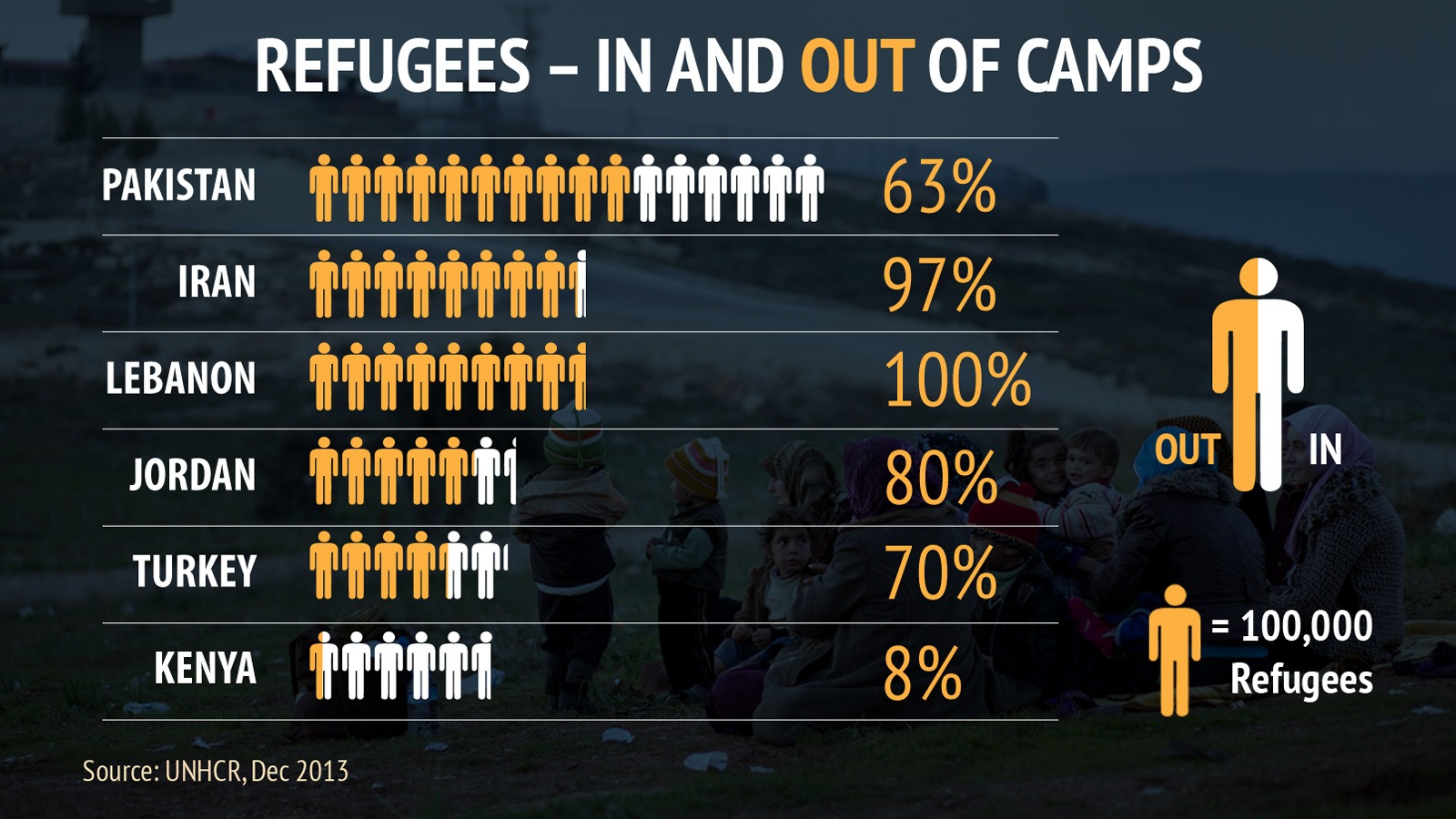 UNHCR’s new policy acknowledges that camps remain a necessary feature of the humanitarian landscape, particularly in the context of emergencies and where host governments insist on them, but adds that “they nevertheless represent a compromise that limits the rights and freedoms of refugees and too often remain after the emergency phase and the essential reasons for their existence have passed.”

“Camps should be the exception and, to the extent possible, a temporary measure,” states the policy.

“The idea is to give people a meaningful choice and the opportunity to live a more dignified life,” he told IRIN.

Sonia Ben Ali, founding director of Urban Refugees, an NGO, described the new policy as “a milestone” and welcomed its rights-based approach. “It plays a very strong role in showing how UNHCR recognizes that camps are not the proper conditions for refugees to live in,” she told IRIN.

Getting host states on board could be tricky

She added that the success of the policy would depend to a large extent on how effective advocacy efforts will be, particularly in convincing host governments that alternatives to camps are not only better for refugees, but can also produce better outcomes for local economies and host communities.

“We need to address the [security and economic] concerns of host states, and for this we really need an evidence base,” she said.

Corliss agreed that there was a need to gather more evidence that alternatives to the camps’ approaches could benefit host communities, for example by allowing aid agencies to invest more in local infrastructure instead of funding parallel service delivery systems in camps.

"Refugees come with assets; they have a lot of human potential that can help stimulate the economy. It's very important to document that so we can advocate for it"

“Refugees come with assets; they have a lot of human potential that can help stimulate the economy. It’s very important to document that so we can advocate for it.”

Researchers from Oxford University’s Humanitarian Innovation Project have begun this task with a recent study from Uganda showing that the majority of refugees who gained permission to live and work outside designated refugee settlements, found ways to sustain themselves without aid.

However, not everyone is confident that even evidence-based advocacy efforts will be enough to overcome resistance from host states that often has less to do with real concerns about refugees over-burdening local communities than with what Lucy Hovil, a senior researcher at the International Refugee Rights Initiative, referred to in a recent article as “realpolitik”.

In Kenya, for example, the dominant narrative that Somali refugees represent a security threat, has seen thousands of Somalis living in Nairobi pushed back to camps in the past six months.

“The missing link is to explain how host governments can be persuaded to let refugees have more autonomy,” he said. “What is still not clear is how UNHCR will react when host governments refuse to abandon camps. Will UNHCR cooperate? Will they refuse? How hard will UNHCR push? Will UNHCR fall back on platitudes rather than standards? This, we don't know.”

Corliss of UNHCR acknowledged that “creating an enabling environment in terms of law and policy” would be essential to the new policy’s success, but also pointed to the need for a “fundamental transformation in the way we do livelihoods programming”. Whereas in the past, livelihoods support has been used “as a kind of occupational therapy, to keep people busy in camps”, Corliss said UNHCR was moving towards “a much more hard-headed, market-oriented approach” that would help refugees acquire the appropriate skills to enter a host country’s job market or to start a small business.

Corliss added that bringing refugees to the point where they can achieve sustainable livelihoods requires “comprehensive support over a period of time”.

In recent years, UNHCR and other aid agencies have been experimenting with various ways of delivering that support to refugees dispersed throughout urban areas. “Cash-based interventions will be very important,” said Corliss, and have the added benefit of stimulating local economies. UNHCR is already making use of cash-based interventions in 94 operations around the world. In the longer term, however, there will be a need to work with development partners to strengthen local infrastructure such as public health systems.

“This is a policy that’s extremely ambitious and is going to have to be progressively implemented,” he told IRIN.

Guidance to help field staff operationalize the policy is still being developed and UNHCR will need buy-in from partners, including international NGOs, other UN agencies and donors, but most importantly host governments.

Kagan pointed out that outside camps, what refugees needed even more than aid was rights - “the right to work, the right to send your kids to school. These are the things refugees need in cities,” said Kagan. “They have to have rights to be able to rebuild their lives in dignity. And that requires government buy-in.”