The news that up to 850 lives were lost in the Mediterranean this past weekend as a result of five shipwrecks of boats carrying migrants has sparked a new round of calls for the European Union (EU) to take more responsibility for preventing deaths at sea.

This summer in the Mediterranean has seen an unprecedented number of migrants, refugees and asylum seekers boarding rickety smugglers’ boats in a desperate bid to reach European shores. Most of the movement has been concentrated in the central Mediterranean with the majority of departures from Libya, and Italy receiving most of the arrivals - about 120,000 so far in 2014, more than double the previous record of 54,000 (during 2011 at the height of the Arab Spring).

The number of deaths in the Mediterranean this year has also reached a new high of nearly 3,000, including the death toll from last weekend’s multiple tragedies, one of which appears to have been the result of smugglers deliberating ramming and sinking a boat carrying 500 migrants who refused to switch to a less seaworthy boat.

The figure would undoubtedly be higher if not for the Italian navy’s search-and-rescue operation, Mare Nostrum, launched in October 2013 following a shipwreck that claimed the lives of hundreds of asylum seekers a short distance from the Italian island of Lampedusa. Mare Nostrum has rescued 70,000 people since it began, but it comes with a US$11.5 million a month price tag that Italy is increasingly unwilling to shoulder alone.

Just a day after the release of that statement by UNHCR in late August, came an announcement by EU Home Affairs Commissioner Cecilia Malmstrom following a meeting with Italy’s interior minister that raised hopes member states were finally prepared to support Italy via an expanded mission of the EU’s border agency, Frontex.

The details of the mission, initially dubbed “Frontex Plus”, were vague. Malmstrom said only that it would “complement what Italy has been doing”, depending on the extent to which member states were willing to contribute and participate. Some commentators interpreted this to mean that Frontex would eventually take over from Mare Nostrum. However, migrants rights groups were quick to note the absence of the words “search-and-rescue” in Malmstrom’s announcement and to point out that Frontex lacks either the mandate or the capacity to fulfil that function.

It also soon emerged that Frontex Plus would operate only in Italian territorial waters while the majority of shipwrecks in which Mare Nostrum has intervened have occurred in international waters not far from the Libyan coast.

“It’ll be a classic Frontex border control operation,” said Stefan Kessler, senior policy and advocacy officer with Jesuit Refugee Service (JRS) Europe, who is also co-chair of the Frontex Consultative Forum on Fundamental Rights. “Search and rescue will only be a side effect, meaning that if in the context of those activities a boat in distress is spotted, then the national search-and-rescue authorities will be alerted.”

Ewa Moncure, a spokesperson for Frontex, explained that the new operation, now called Operation Triton, will combine two existing operations off the Italian coast that were due to expire at the end of September and will now be extended and merged starting from the end of November.  “It would be closer to Italian shores and it won’t replace Mare Nostrum,” she confirmed.

“Search-and-rescue is always coordinated by national authorities,” she told IRIN, adding that Frontex vessels are required by maritime law to respond to boats in distress in their vicinity and that trained and equipped coast guards are on board. “But this is not the mandate of this agency.”

Michael Diedring, secretary-general of the European Council on Refugees and Exiles (ECRE), speculated that member states may not have come forward to pledge support for Frontex Plus at the levels Malmstrom had initially hoped for, “but having said that, it’s been long-standing policy of the EU, and particularly of the member states, that they want to focus on protecting borders not saving lives.”

Meanwhile, the Italian government is under pressure to terminate Mare Nostrum. Its detractors cite not only the cost of the operation but suspicions that it is making the job of smugglers easier and creating a pull factor for migrants by picking them up from boats in distress close to the Libyan coast and ferrying them to their destination. Even Malmstrom has attributed “increased trafficking intensity on the other side of the Mediterranean” to Mare Nostrum and noted that “people have been put in even more unsafe vessels and even smaller boats because of the likelihood of them being saved.”

Single men sleep in a partitioned section of the San Giorgio military ship. On this particular night, 820 of them squeeze into this overcrowded area. Families and single women also have their own separate sleeping areas. 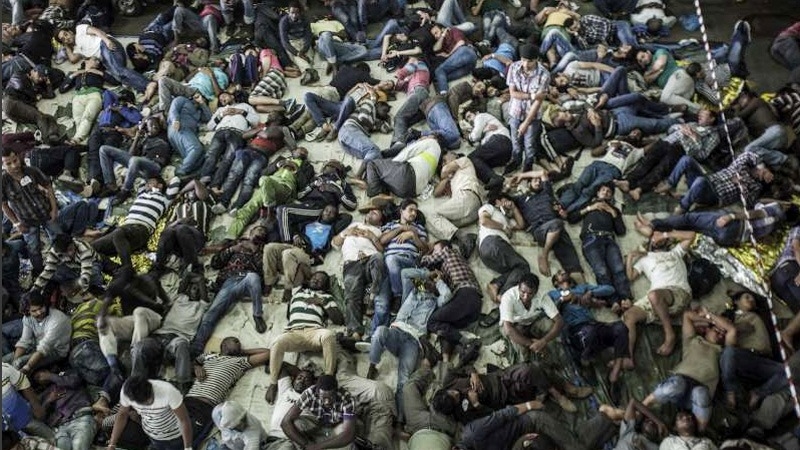 Kessler was dismissive of such arguments. “Calling Mare Nostrum a pull factor is nonsense. If you look at where these people come from - Syria, Eritrea, Iraq, Afghanistan - they are fleeing whether Mare Nostrum exists or not.”

Spokesperson for UNHCR’s Europe bureau Ana White also linked the increase in the number of people trying to reach Europe by sea to “the growing number of people fleeing conflict and violence in Syria, Eritrea, Iraq, Somalia and elsewhere, as well as the breakdown of law and order in Libya.

“Larger scale arrivals by sea had increased some months before Mare Nostrum had started,” she added.

White described effective search-and-rescue as “critical” but added, “this cannot be the only response from Europe; increasing safe legal alternatives to dangerous journeys for those in need of protection and adequate reception capacity should be prioritized.”

Diedring agreed. “I would say it’s EU policy that’s making it easier for smugglers, because there are almost no legal avenues [to reach Europe], particularly with respect to Syrians and Eritreans.”

Eritreans made up a quarter of all arrivals to Italy between January and August, according to Italy’s Ministry of the Interior, while Syrians accounted for 21 percent.

"Eritreans get over 90 percent refugee recognition in the EU, but they have to risk their lives to put their foot on European soil. It's a ludicrous policy"

“Eritreans get over 90 percent refugee recognition in the EU, but they have to risk their lives to put their foot on European soil. It’s a ludicrous policy,” said Diedring.

There are few indications that last weekend’s astounding death toll will lead to significant changes in that policy. Instead, Europe continues to shore up its defences against irregular migrants, whether or not many of them are in fact asylum seekers. In the last year, Bulgaria has attempted to keep out mainly Syrian refugees with a fence erected at its border with Turkey; Greek coast guards have been accused of pushing boats containing migrants back into Turkish waters; and Spain’s border police have shot rubber bullets at migrants trying to swim to Spanish territory from Morocco.