As South Sudan’s peace process stalls, questions are being raised about Uganda’s military involvement, with some analysts saying it is impeding regional efforts to broker a peace deal.

Although the 23 January Cessation of Hostilities Agreement signed by both principals in the conflict, South Sudan President Salva Kiir and opposition leader Riek Machar, called for the phased withdrawal of all foreign troops in South Sudan, the Ugandan People’s Defence Force (UPDF) has yet to do so.

“We continue to support the implementation of the 23 January Cessation of Hostilities agreement, which called for the withdrawal of all outside forces from South Sudan,” Erin Rattazzi, acting spokesperson of the US Department of State’s African Bureau, told IRIN.

Ugandan President Yoweri Museveni has hinted that Uganda would withdraw troops once the Intergovernmental Authority on Development (IGAD), the regional body mediating between the warring parties, of which Uganda is a member, deploys its Protection and Deterrent Force. But it is unclear when the force will become operational.

In December, Museveni sent in military personnel and aircraft to stop what it later called a possible genocide from happening in South Sudan. Parliament retroactively authorized the mission, which was originally intended to evacuate thousands of Ugandan businessmen living in South Sudan, and protect key government interests, such as the airport and State House.

However, the role of the army changed to one of preventing a massacre from happening in Juba.

Museveni averted “colossal loss of lives and property” in the capital and prevented the South Sudanese government from retaliating to the advance of the White Army, made up of predominantly Nuer youth militia by mobilizing their own “allied ethnic groups to wreak havoc” according to Abraman Awolich, a founder of the Juba-based Sudd Institute.

“Given what unfolded after the so-called White Army, in their tens of thousands, took control of Bor, had they managed to reach Juba, genocide would have occurred because they had the intent to kill, loot and destroy both public and private property,” Awolich added.

It is unclear how much control Machar has over the White Army, and to what extent they would respect a ceasefire order.

“The breakdown of security and the rule of law during the post-CPA [Comprehensive Peace Agreement, signed between Khartoum and South Sudan in 2005] era, especially in rural areas, has necessitated continued militarization of youth and the use of revenge to provide a sense of justice, including compensation for the loss of lives and property,” noted a report on the role of the White Army released in June by the Peace Research Institute Oslo (PRIO).

“While they cooperate militarily against the government in the current conflict, they have fought in parallel and under different command structures,” said the authors of the report.

While agreeing that Museveni “averted a disaster” and potential genocide in the capital, Panther Alier, a former “Lost Boy” who returned to do development work in the newly independent Republic of South Sudan believes that their help is no longer as needed. (The Lost Boys were orphaned children who trekked hundreds of kilometers to flee Sudan’s 1986-2005 civil war).

“Their presence at the moment is only to help psychologically,” he told IRIN. “This is only two battalions and their role in a protracted war would only be minimal.”

But, he noted, Ugandan troops “have done more good than harm.”

Some worry that Kampala is now contributing to the continued stalemate.

Akshaya Kumar, Sudan and South Sudan policy analyst at the Enough Project, said Uganda’s military actions have been “deeply politicized”, with the South Sudan government claiming that it was necessary to protect Juba, and the opposition using the intervention to delay implementation of the cessation of hostilities agreement.

“Uganda's continuing presence in the country undoubtedly affects the balance of power of the conflict,” she told IRIN. “For peace talks to yield a durable and holistic solution, a much more inclusive approach must be conceptualized. The withdrawal of Ugandan fighters and arrival other IGAD forces could serve as a significant point of leverage to ensure that these broad-based conversations are initiated.”

“Any presence of foreign troops in South Sudan has to be under the auspices of the regional bloc or the United Nations and the troops must come from countries perceived [to be] or that are actually neutral,” Nicholas Opiyo, a political analyst in Uganda, told IRIN.

“Uganda's role in the conflict has been one-sided - not as referees but as fighters on the side of the Kiir forces. They are therefore part of the problem and cannot be part of the solution,” he said.

A water collection point in Tomping camp in Juba 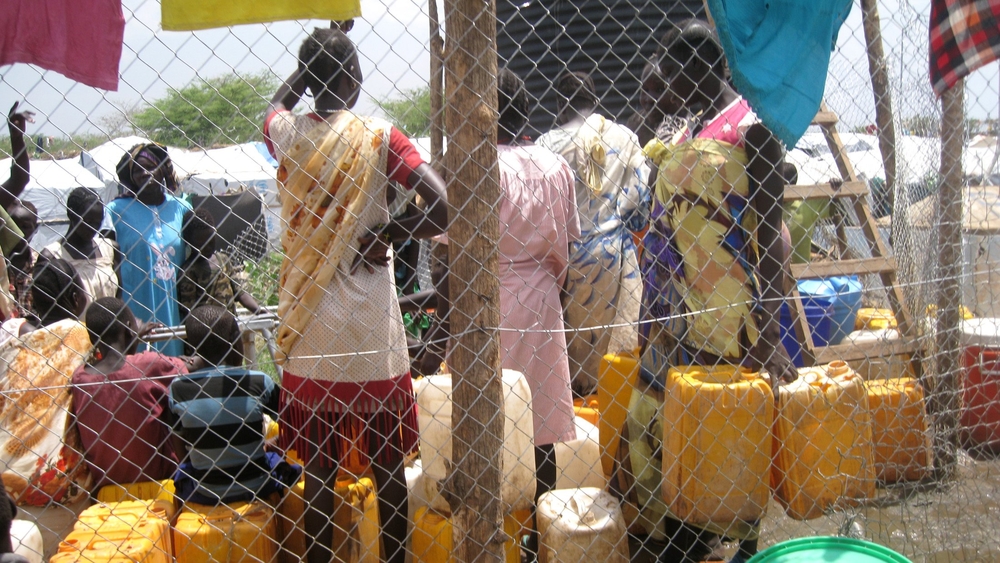 “Outside help is necessary, but should not be allowed to set local agenda for the process of peace and reconciliation,” Reverend Bernard Suwa, secretary-general of the Committee for National Healing, Peace and Reconciliation (CNHPR), told IRIN. “As you may be aware, war has since become an enterprise and we should not allow external forces to manipulate the process of reconciliation to their own selfish gain.”

The South Sudanese ambassador to Uganda, Samuel Luate Lominsuk, however, disagreed strongly. “The call for Uganda to withdraw its troops from South Sudan is irrelevant. The troops are there to provide peace and security. The rebel delegation wants Ugandan troops out so that they can walk to the capital Juba to destabilize our country,” he said.

“Uganda will only pull out its troops after the deployment of IGAD regional Protection and Deterrent Force to fill the gap on the ground. If they leave without the IGAD force on the ground, this will create a vacuum to reverse the current peace and stability,” he added.

Ugandan President Museveni appeared to echo the sentiment. “We have no problem [withdrawing]. We don’t have any more to do there. We have achieved the purpose for which we deployed there, keeping peace and reconciling the two [Kiir and Machar],” he said. “We went there to stop fighting. We didn’t want South Sudan to collapse. Our brothers have a chance now to rebuild their country.”

But with peace talks adjourned for “consultations” following the boycott of the talks by the opposition on 10 June, it appears unlikely that Uganda will withdraw soon.

Stephen Oola, a transitional justice and governance analyst at Makerere University’s Refugee Law Project, told IRIN that “peace in South Sudan is in the best interest of Uganda,” but Uganda’s military involvement would be unlikely to achieve that purpose.

“If peace-talks fail, and worse, if it fails because of Uganda's action as a stumbling block, then history will judge us hastily and the consequences might be dire. Not only would IGAD as an institution for peaceful resolution of conflict amongst member states weaken, but it will be clear that Uganda is indeed an occupying force,” he said.

“Yoweri Museveni assiduously cultivated close personal ties with South Sudanese President, Salva Kiir. The scenario most feared by Uganda is an outright victory by the opposition forces,” said Berouk Mesfin, a senior researcher at the Institute for Security Studies (ISS) Africa. “This would lead to Kiir’s removal from power, which would be a strategic setback to Uganda and erode its capacity to influence future developments in South Sudan.”

It has led to increasing tensions among South Sudan’s other neighbours. “The conflict is already taking a regional dynamic,” said Opiyo. “The only difference is that these foreign countries have not been actively fighting against each other. The tensions, however, are clear.”

“Regionalization of this crisis would be very concerning. We are working closely with partners in the region, and especially with IGAD, to help facilitate a peaceful resolution to this conflict,” said Rattazi. “Their role has been critical in bring the parties to the table. We would oppose any effort by outside actors to expand or escalate the conflict.”