Bangladesh's leather tanneries are notoriously filthy, exposing workers and the surrounding neighborhood to toxic chemicals. And recent studies show that poultry feed produced from industry scraps may also be putting the health of millions throughout the country at risk.

“The whole nation is under threat as chicken is the most consumed meat, and also the cheapest source of animal protein,” said Abul Hossain, a chemistry professor at the University of Dhaka, who led recent studies on how chromium, a tannery waste product, is transported into chicken meat. “This is extremely alarming.”

According to the Bangladesh government’s Department of Environment (DoE), tanneries in Hazaribagh, an industrial neighbourhood in Bangladesh’s capital, Dhaka, emit around 21,600 cubic metres of toxic waste each day - including chromium, sulphur, ammonium, and other chemicals.

The tanneries also generate as much as 100 tonnes per day of scraps - trimmed raw hide, flesh and fat - which are processed into feed by neighborhood recycling plants and used in chicken and fish farms across the country.

Although the maximum recommended daily dose of chromium has not been established, a review by the European Food Safety Authority stated that a 60 kg person could tolerate up to 0.25 milligrams of chromium per day, and noted that carcinogenic chromium “hexavalent” (produced as part of the industrial process) should be kept “as low as possible” in all foods.

“We have found chromium ranging from 350 to 4,520 micrograms [0.35 to 4.52 milligrams] per kg in different organs of chickens which were fed the tannery scraps feed for two months,” said Hossain.

Cheap poultry is an important part of the diet in food insecure Bangladesh. It accounts for 75 percent of the national demand for meat and provides employment opportunities in both the formal and informal livestock sectors. A 2012 report by the International Food Policy Research Institute argued that expanded poultry rearing makes economic sense for Bangladeshi farmers confronted by land shortages. 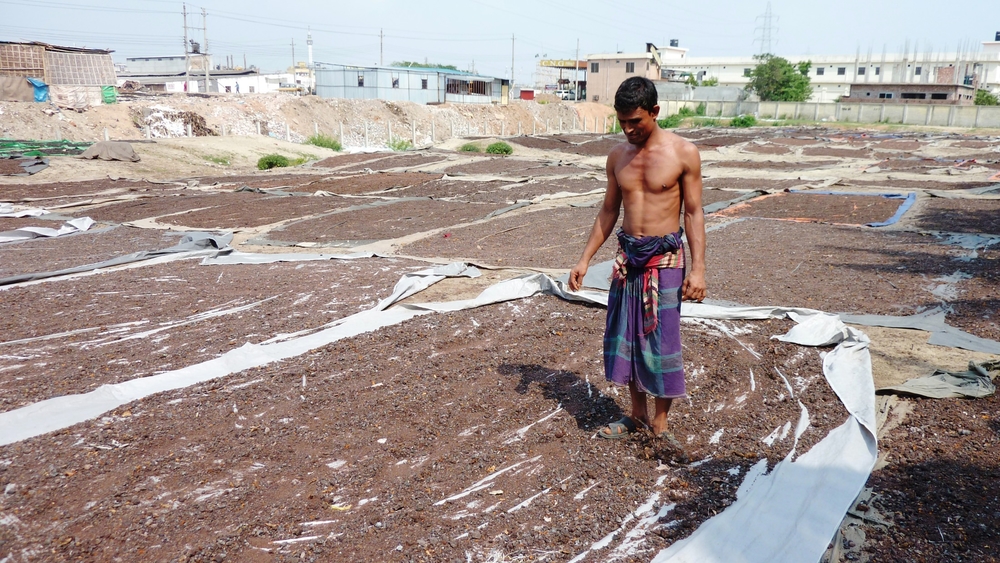 Poultry feed produced from tainted industry scraps is attractive to farmers because of its rich protein content - and it’s cheap. The government has failed to enforce its own regulations, although aware of the risk of these carcinogenic chemicals entering the food chain.

A 2012 Human Rights Watch report documented appalling health conditions among tannery workers in Hazaribagh related to the chemicals they work with, including itchy, peeling, acid-burned, and rash-covered skin; fingers corroded to stumps; aches, dizziness and nausea; and disfigured or amputated limbs.

But outside tannery walls an informal poultry feed business relies on the contaminated by-products of this toxic industry.

Anwar Hossain, who owns of a makeshift recycling plant in Hazaribagh, explained: “We buy the raw hide scraps and shaving and buffing dust [chromium- and dye-impregnated waste products] from the tanneries, and soak them with lime before boiling them to a black-coloured paste.”

He estimates there are around 60 factories like his that produce up to 30 tonnes of poultry and feed per day.

“The demand for the scraps-made feed is overwhelming because the chickens grow very fast on this, and it is also cheap compared to other supplements available,” he said, denying any possibility of the product being toxic. “We boil the scraps, so there is no possibility of having chromium or any other toxic element.”

“The production and distribution of this feed must be stopped. Truck loads of this feed are being transported to different parts of the country. Clearly, we don't know which chickens are being fed with this.”

But a 2013 study argued, in fact, that boiling and sun-drying can convert chromium into the carcinogenic “hexavalent” form also known as “Cr (VI).” The study estimated up to 25 percent of the chickens in Bangladesh contained harmful levels of Cr (VI).

Seeping into the system

Mohammad Kaiser, a chicken farm owner in northern Netrakona District, said he heard of farmers in his area using a feed supplement that caused the rapid growth of chickens.

“I’ve never used this feed for my chickens,” Kaiser said, adding that he had no idea how such products were produced.

According to the UN World Health Organization (WHO), “ingestion of high doses of Cr (VI) compounds by humans has resulted in severe respiratory, cardiovascular, gastrointestinal, hematological, hepatic, renal and neurological effects.”

Slipping outside the law

For the feed processing facilities, enforcers face the additional barrier of the outfits being unregistered to begin with.

A worker boils scraps of animal parts left over during the leather tanning process to be made into poultry feed. Scientists have found harmful levels of chromium, an industrial chemical output, in chickens around the country. 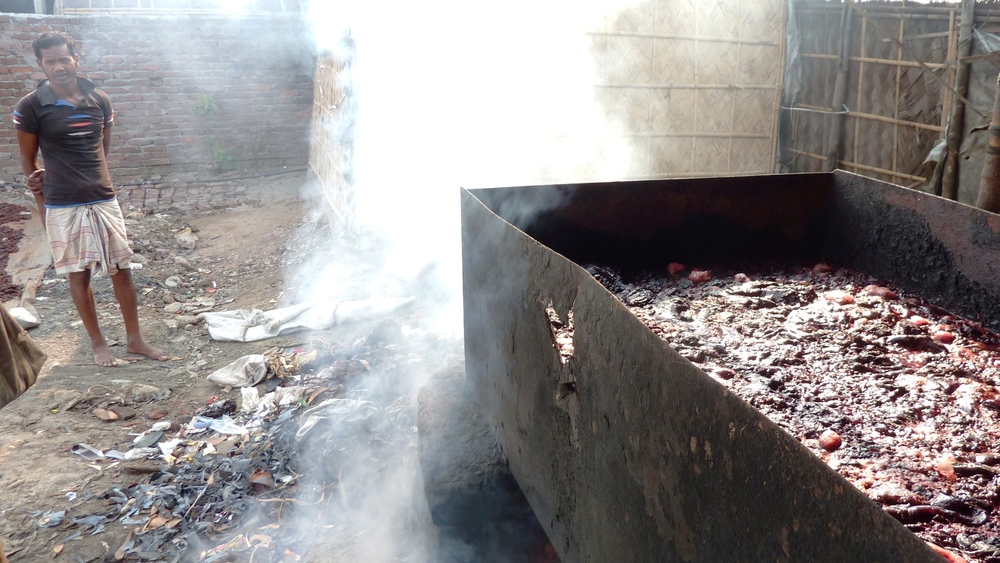 “All the recycling plants are operating illegally as they do not have any license, so this non-formal sector is difficult to regulate,” said Mohammad Alamgir, monitoring and enforcement director at DoE.

“If we stop them today, they will just return and resume operation soon.”

After local media reported on the polluted poultry feed in May 2014, DoE that month shut down six recycling plants. However an unknown number of others continue to operate.

“The production and distribution of this feed must be stopped. Truck loads of this feed are being transported to different parts of the country,” Alamgir said. “Clearly, we don't know which chickens are being fed with this.”

Moshiur Rahman, convener of Bangladesh Poultry Industries Coordination Committee, admitted the production of poultry feed from tannery scraps was a “bad practice” but reported he did not know which farms across the country use the feed.

“There is a murky chain behind this tannery scraps-feed, but this must be stopped”, he said.