As Iraq prepares to hold its first election since the withdrawal of US troops in late 2011, the country is struggling to contain increasing sectarian violence which some fear could push it back down the road towards civil war.

In the western province of Anbar, government forces are shelling the cities of Fallujah and Ramadi in a bid to counter what they say is an Islamist insurgency.

This has triggered the displacement of nearly 440,000 people within four months, sparking a humanitarian crisis to which under-funded agencies are struggling to respond due to lack of funding and a worsening security situation.

According to Iraq Body Count, a UK-based independent tracking database, 863 people were killed between 1 and 26 April, while the overall death toll since the beginning of the year is rapidly approaching 4,000.

Although the current death rate is still well short of the 2,000-a-month seen at the height of the al-Qaeda insurgency in 2006, it is the highest it has been for six years - fuelling fears that the violence will only increase after the 30 April elections as the various political blocs vie for influence and power.

A number of respected commentators, including David Ignatius, an associate editor and columnist for the Washington Post, and veteran British foreign correspondent Patrick Cockburn are now starting to ask if the country is heading back to civil war.

“While in pure numbers terms, we aren’t back in 2006,” Erin Evers, Iraq researcher for Human Rights Watch (HRW), told IRIN, “in terms of the rhetoric that's being used and the resurgence of Shia militias fighting alongside the government, then yes, we are definitely going back to 2006 in terms of things being more and more sectarian-dominated."

Getting worse before it gets better

Daniel Serwer, a former US diplomat and senior research professor of conflict management at the Johns Hopkins School of Advanced International Studies, agreed that the death rate was nowhere near as bad as 2006, but he warned: “Things can get much worse from where we are, and more than likely they will, though I still think this election represents an opportunity to change the approach to governance and make a more effective government.”

However, the elections also present a serious risk of escalation of tensions.

“Politically, all sides are staking out increasingly extreme positions… It's hard to see how the elections, however the results come through, can detoxify this atmosphere,” Stephen Wicken, an independent Washington-based Iraq analyst, told IRIN.

“I don’t think civil war is looming, but I do think the risks are higher than at any point in recent years. Short term, it may get worse before it gets better,” he said, though he noted “Iraq has an incredible capacity to bend without breaking”.

Taking those last thoughts several steps further, Yasseen Abbas, president of the Iraqi Red Crescent, one of the few aid agencies that has been able to deliver aid inside troubled Anbar Province, told IRIN in March that civil war was not a possibility.

“Iraqi people suffered a lot during 2006 and 2007 and it will take a lot for them to go back there. They will never accept a situation like that again, everybody wants to live and for their children to have better lives.”

Wicken did, however, raise concerns about the rising profile of Iranian-backed Shia militia group Asa'ib Ahl al-Haq (AAH), or League of the Righteous, which is now active in Syria fighting on the side of President Bashar al-Assad. AAH’s political bloc, Sadiqun, is informally allied to Iraq’s Shia Prime Minister Nouri al-Maliki’s political coalition.

“Asa'ib Ahl al-Haq are bigger and bolder than at any point since Coalition troops withdrew,” he explained. “For the moment I would say that they're occupied primarily with Syria... but if the fighting in Syria should reach a real stalemate, or if something should happen in Iraq to draw their focus, Iraq could be on course for civil war.”

The warning bells may already have been rung. On 25 April, twin suicide bombers struck at a Sadiqun rally in Baghdad, killing 36 people. The attack was later claimed by the Islamic State of Iraq and the Levant (ISIL), a jihadist outfit formerly affiliated to al-Qaeda, which the Iraqi Security Forces (ISF) say is fighting in Anbar.

Iraq’s government blames ISIL for the upsurge in violence in the country since early 2013, saying the group’s powerbase has been boosted by its activities across the border in Syria.

However, contrary to this official line, many of those who have taken up arms against ISF in Anbar are not affiliated to ISIL but are in fact members of local Sunni military councils, which in 2006 backed US troops against the al-Qaeda insurgency in Anbar.

Frustrated by what they see as a Shia-led government pursuing a long-running agenda of exclusion against Sunnis (including targeting parliamentarians with terror charges, killing and detaining some and forcing others into exile), large numbers have now decided to mobilize against ISF to defend their province.

“If you ask Anbaris about what is happening there, they will tell you it’s not really about ISIL at all, but rather more of a collective punishment against Sunnis,” HRW’s Evers said. “That is what 99 percent of people I have spoken to believe.”

“ Iraq has an incredible capacity to bend without breaking ”

She added: “There are also many people who don’t see ISIL as a genuine force. They believe it is an Iranian-funded Shia construct that is being used to divide the opposition in Syria as well as stoke sectarian tension against Sunnis in Iraq,” noting that that while the theory may sound like a far-fetched conspiracy, it reflected the depth of government mistrust among Sunnis.

However, while Sunnis are angry that ISF is bombing Fallujah and Ramadi, the offensive has pleased many Shias who back Maliki for what they see as decisive action against insurgency.

Although the fighting in Anbar initially seemed like it would remain contained within the province, ISIL appears emboldened and is spreading its wings.

Earlier this month, it claimed control of a strategic dam on the Euphrates River, flooding homes in Abu Ghraib on the western edge of Baghdad. According its own online propaganda, the group is preparing to launch a major assault on the capital.

Wicken said it was clear that sectarian tensions were “rising across the board” ahead of the elections.

“Essentially, the higher the level of sectarian passion across Iraq, the more opportunity - and potentially support - is afforded to groups seeking to make use of that atmosphere,” he said.

Citing a recent attack in Diyala Province, he pointed out how the Sunni Arab media had reported it as “a genocidal massacre by security forces and Shia militants”, while Shia channels and the government insisted it was a legitimate counterterrorism operation.

“Both sides use this kind of violence to bolster their political narratives while the civilians suffer,” he added.

A man and his son wait outside their house on a bedstead in Mushada, Iraq. During the summer months, Iraqis in towns and in the rural areas sleep on their rooftops or in their yards to get some relief from the night time heat. 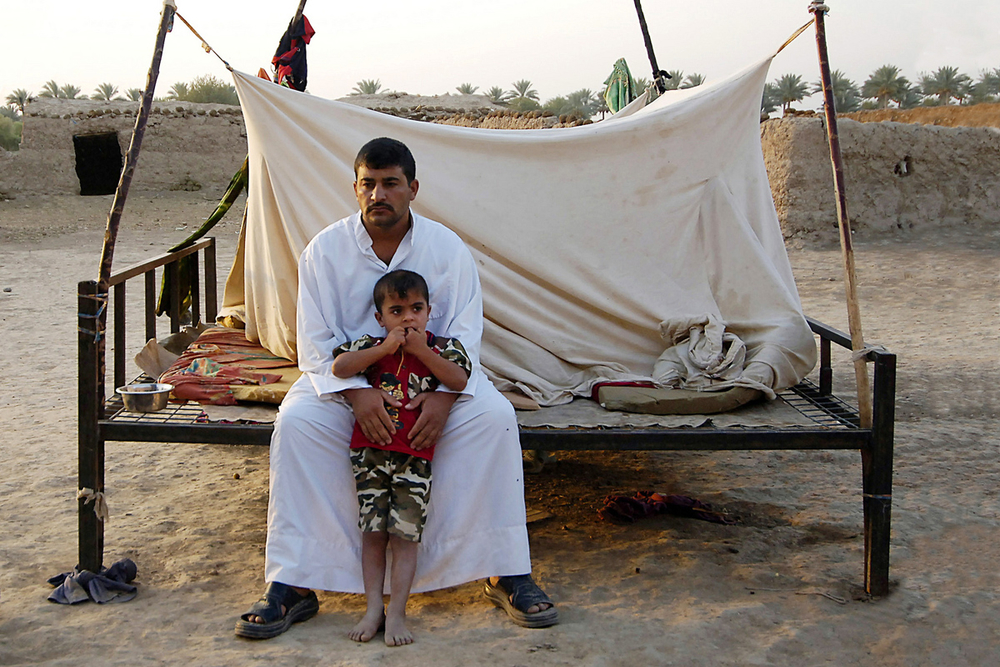 In Anbar, thousands of homeless people displaced by the violence are squatting in mosques and outhouses without sanitation or adequate food supplies. Indeed, across the country, the deteriorating security situation is taking its toll on everyday life.

Fabio Forgione, head of mission for Médecins Sans Frontières (MSF) in Iraq, explained: “The violence has been a threat not only to people and their lives but also to systems, which are increasingly affected.

“You see particularly in rural areas that access to basic health services is going down and that is a concern to us. Either services are not available any more, or people don’t feel they are able to travel because of security concerns or medical professionals don’t want to go into these areas.”

Forgione said the breakdown of primary healthcare facilities was piling pressure on already over-stretched hospitals and that even health services were splitting to serve distinct communities.

"It’s a natural instinct but the more it goes on, the more entrenched it becomes and you get the feeling we are heading back to times from before when services were very divided along sectarian lines,” he said.

Evers, of HRW, noted that even though many ordinary Iraqis did not support sectarianism, they were forced to seek protection with Sunni or Shia affiliated-groups for the sake of their own and their families’ safety, something that had further fuelled divisions.

“I think generally people are really disgusted by the sectarian rhetoric but I also think they are very scared,” she explained. “The government has completely failed to protect them and so they have no choice but to turn to these groups… People don’t see any alternative, ultimately they are terrified.”

A Western aid worker, who has spent the last four years based in Baghdad, said it was “disappointing” and “sad” to see Iraq appear to “slide backwards” after she said there had been so much hope and promise that things were getting better.

“People are very afraid to the extent they are too scared to send their children to school, in case they don’t come home,” she said. “But on the other hand, I think they are also so desperate not to be swept back up into a civil war and so fatigued with the fighting that I don’t know if things really will escalate or not.”