The row over how to patch up the severed highway was heating up. With truck crews close to blows over who should lay the massive rocks into the mud that had halted traffic for a week, one driver pinned the blame on the Democratic Republic of Congo’s (DRC) highest authority.

“The road is rotten! Congo is rotten! Can’t you see it? If the president was here right now, I would be kicking him,” the man said bitterly before returning to the quagmire to pacify his colleagues.

Decaying infrastructure is a fact of life across DRC, the legacy of multiple wars and a chronic lack of investment. But the condition of the R617 highway in the southern province of Katanga, as well as recurrent cholera epidemics, seems grotesque given the region’s lavish natural resources.

Katanga, a province the size of Spain, holds many of DRC’s reserves of copper, cobalt and other valuable minerals. Scores of trucks thunder daily along its few paved roads laden with metals bound for export and shipping through Durban and other distant ports. However, few of the many millions of dollars in taxes paid by mining companies to DRC authorities are invested in Katanga’s economic or social development, leaving swathes of the population mired in poverty.

The disconnect has fanned political tension between Katangan leaders and the central government in faraway Kinshasa. It has also fuelled an armed rebellion in the mountainous centre of the province that has displaced up to 400,000 people and prompted the UN to declare a humanitarian crisis in the region.

Ibond Rupas Anzam, director of an NGO promoting regional development in DRC, said central governments had traditionally devoted few resources to development anywhere in the country. Corruption, embezzlement and poor allocation have further diminished the impact of those meagre budgets.
The International Monetary Fund on 25 February urged the government to foster “inclusive growth” in the economy, which is expanding at a rate of more than 8 percent annually, and spend more on education, health and basic infrastructure.

In Katanga, both provincial and the national authorities have shown “some willingness” to improve things, Anzam said, pointing to road projects in and around the major towns. Provincial officials say some indicators, including school attendance rates, are improving from a low base.

“But in rural areas, kids are learning and teachers teaching in conditions that would make you cry,” Anzam said. “If you see the extent of what has been done so far compared to the overall needs, it is really insignificant.”

Like the roads, Katanga’s railways are in a lamentable state. Regular trains once enabled rural farmers to supply towns such as Lubumbashi and Kalemie. Today, those services have broken down, and there is little incentive for farmers to produce more than they consume themselves, Anzam said. As a result, Katanga’s urban population has become dependent on maize flour imports from neighbouring Zambia.

Subsistence farming leaves rural families vulnerable to external shocks such as drought, disease or unrest, including the mass displacement caused by the secessionist militias operating in central Katanga’s so-called “Triangle of Death”.

“Everyone hopes for stability in this zone, which doesn’t deserve this fate,” said Amadou Samake, head of the Katanga office of the World Food Programme, which is distributing rations to the displaced. “It is a (potentially) rich zone, quite fertile for agriculture.”

Health is another area where the impact of Katanga’s underdevelopment is starkly illustrated, particularly in its vulnerability to cholera.

According to the World Health Organization, DRC reported 33,661 cases of cholera in 2012, the highest in Africa and second in the world only to earthquake-struck Haiti. Katanga is a hotspot and the situation appears to be worsening.

Outbreaks are common along the shores of Lake Tanganyika and many of the other lakes in the province, the waters of which act as reservoirs for the bacteria that cause the disease. But cholera is also ravaging the cities, including the mining hubs of Lubumbashi and Likasi.

Cholera used to be unheard of in Likasi, a city of 450,000 in the heart of Katanga’s copper belt, according to Gaspard Ilunga Dipata, its top medical official. For years, state-owned mining giant Gecamines helped maintain the water supplies and kept the city clean, he said. But Gecamines all but collapsed in the 1990s, touching off the decay.

A father feeds rice to his son as he recovers from cholera at a hospital in Likasi, DRC 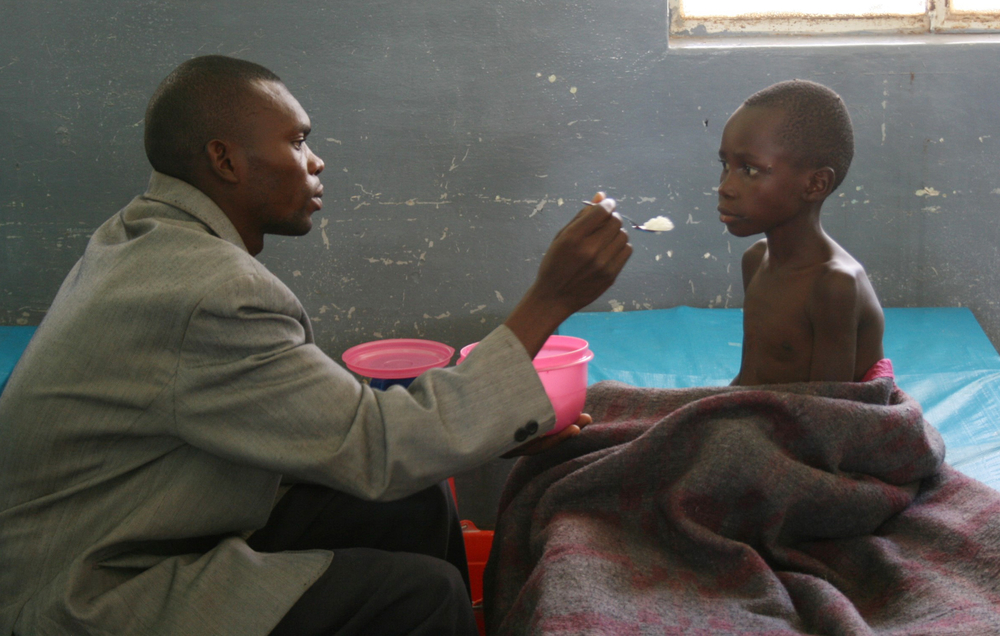 A cholera outbreak still raging in Likasi in January was the second in 12 months, adding more than 700 new cases to the 894 registered in the first ones from October 2012 and June 2013. Dozens of people died from the disease, which causes violent diarrhoea and rapid dehydration.

Contaminated water supplies and poor sanitation - both traceable to the lack of investment - as well as poor hygiene practices among the city’s residents are at the heart of the problem, Dipata told IRIN.

Rotten pipes mean water reaching the city’s residential areas can be tainted with faeces. Interruptions to the supply because of shortages of both water and electricity also mean citizens often have to haul untreated water from rivers and open wells. Overcrowding and the lack of municipal services mean septic tanks are overflowing into the streets, especially in the rainy seasons.

“Those who don’t have a toilet, they just do it in a plastic bag and throw it away,” Dipata told IRIN.

UNICEF, the UN Children’s Fund, has funded emergency measures, including distributing chlorine tablets and installing water tanks. It has also supported a ward at a Likasi hospital that treats cholera victims free of charge.

Dipata said officials are elaborating plans, from replacing old pipes to educating residents, to tackle the problem, but have yet to line up the finance.

“The authorities are trying, but the means are limited,” he said.

Katanga’s leaders have long shifted the blame for the lack of funding for such initiatives to the central government in distant Kinshasa.

A new constitution passed in 2006 foresaw sweeping decentralization of power to the provincial and local levels, raising hopes that leaders would become more accountable and responsive to people’s needs. However, key sections of the new charter remain unimplemented.

Katanga chafes particularly at the failure to activate an article granting provinces the right to retain 40 percent of the national revenue collected on their territory.

Governor Moise Katumbi said Katanga generates about US$1.5 billion in annual revenue (up from $80 million in 2006) and is the largest contributor to the national coffers. But he says the provincial authorities have a budget of just $30 million, of which $18 million is available for public services and infrastructure.

“Imagine what we could do with the 40 percent!” he told IRIN.

Katumbi, a wealthy businessman, praised the efforts of mining companies to provide infrastructure as well as education and health services in the areas where they operate. For example, the firms stumped up $5 million to refurbish the main hospital in Lubumbashi and put together a loan of $20 million to rebuild a key bridge near the mining town of Kolwezi, he said.

However, such investments have benefited only a fraction of the population and done nothing for many remote areas, where violent secessionists have been able to recruit hundreds of disenfranchised youths - allegedly with the clandestine support of local political leaders.

Angelos Nyembwe, a human rights activist in Lubumbashi, complained that only a tiny elite were really benefiting from the mining boom. The provincial authorities, he argued, raised enough with their own taxes to do more to promote development.

“Even in Lubumbashi people are dying because there is filth everywhere and no clean drinking water,” he said. “It is as if all this wealth doesn’t exist. You just don’t see the impact.”