Join us this Monday for an online conversation
GOROKA

When Willie Savo needs to relieve himself, there’s only one place to go. “Near the mango tree,” the five-year-old said outside his family’s village home. “Where else am I supposed to go?”

That’s a good question in Papua New Guinea (PNG), where more than half of the 7.5 million people practice open defecation, and awareness of the health risks remains low.

“The issue of open defecation is a huge problem in PNG, with limited numbers of households across the country having access to toilets,” Louise Ewington, country director for Oxfam in Goroka, Eastern Highlands Province, told IRIN. “Low levels of formal education (particularly in rural areas) and a lack of awareness regarding the public health implications of open defecation, exacerbate the problems associated with it.”

Government figures indicate that up to 18 percent of the rural population and 5 percent of the urban population have no access to a hygienic toilet. Others, like Lilian Siwi, head of health in Eastern Highlands Province, estimate the real gap is much wider. “Ninety-five percent of villages in our area don’t have toilets. As a result, open defecation remains high,” she said.

Whatever the actual figure, the health implications are undeniable. International health experts say the safe disposal of excreta and hygienic behaviour play a key role in mitigating the risk of diarrhoea and other diseases, including cholera, dysentery, hepatitis, typhoid, polio, trachoma and respiratory infections, as well as intestinal parasites like giardia, and worms.

Of particular concern is open defecation near rivers or other water sources, because more than 60 percent of Papuan New Guineans obtain the water they use for drinking and other household purposes directly from a natural source.

Over 900 children die every year from diarrhoea caused by unsafe water and poor sanitation, according to Water Aid, an international NGO, making it a leading cause of death among children under the age of five.

Diarrhoea is one of the leading reasons for both inpatient and outpatient visits to health facilities, the government reported as part of the requirements in the National Health Plan 2011-2020.

“The [cholera] emergency… in 2009 - [a disease] not seen in the country in 50 years - is indicative of the risks that exist when safe water and sanitation are not available, and basic hygiene such as hand-washing is neglected,” the plan noted.

An AT Projects staff member near Goroka shows off the concrete slabs they assist local communities in installing. More than half the country's 7.5 million population practice open defecation 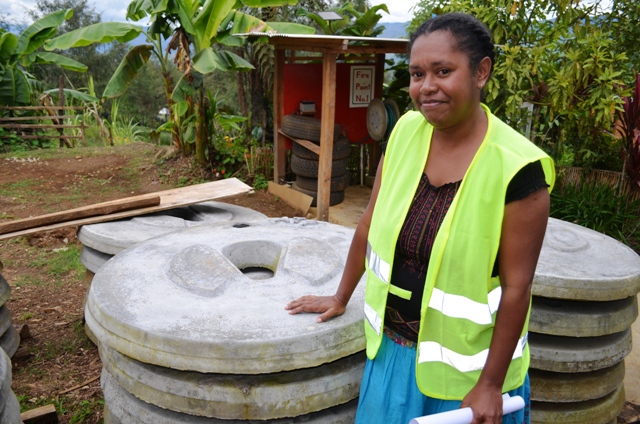 Efforts to address open defecation in PNG are not new. As a mandated territory under Australian administration after World War II, there was a major push to expand access to sanitation and improve general health. Thousands of pit latrines were constructed and Australian Patrol officers, or Kiaps as they were known locally, imposed spot fines on those who did not comply.

After independence in 1975 these measures were no longer implemented, the latrines were not maintained, and residents quickly reverted to more traditional practices. Many older Papua New Guineans remember when the toilets were introduced into their communities, but are still not sure why they were supposed to use them.

“The process wasn’t voluntary. Locals were told they had to use pit latrines, but were never instructed as to why they were important. Instead, it was forced upon them and it failed,” said Miriam Layton, co-director of the AT Projects, a local NGO working to raise awareness and improve hygiene in Goroka.

As a result, children like Willie continue to defecate outside in the open, and to bring excreta back inside their homes on their bare feet, where their mothers prepare food. This increases the risk that family members will accidentally ingest faecal matter, and get sick as a result.

Getting the message right

Studies confirm that efforts to stop open defecation are more effective when there is consensus among community members than simply constructing toilets or latrines. “Using toilets is a foreign concept for villages in PNG,” said Siwi. “We need to get our messages right, and people from the outside that want to support us need to understand this.”

While there is a gap in the number of pit latrines available, she insisted that behaviour is also critical. Rick Steele, the country representative for Water Aid, agreed. “Behaviour is the number one issue. It’s not just getting people to build latrines - we need to change the mindset of communities.”

A mother and her child outside their home at the 9 Mile settlement outside Port Moresby. Thousands of people in such settlements are without proper access to toilets. More than half the country's 7.5 million population practice open defecation 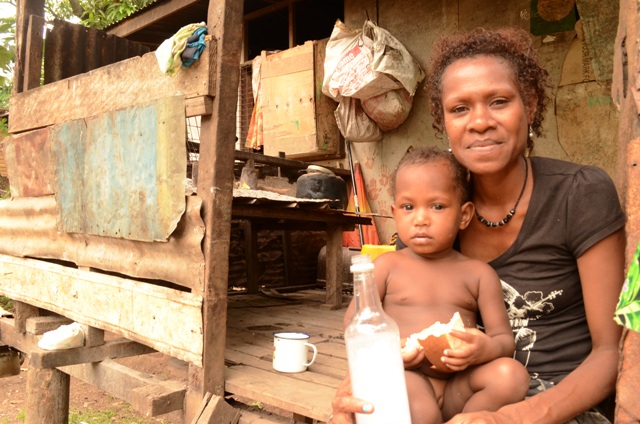 Local NGOs usually have a much better success rate in implementing CLTS because they have a regular presence in the community and can follow up after a community-wide demand to stop open defecation has been triggered. Facilitators from the area are also able to speak the local language and understand village customs and social connections, and how these might impact efforts.

Since 2009, AT projects has been working to expand awareness of open defecation and hygiene, while helping local communities build their own latrines using “round loo” slabs. More than 1,000 concrete slab latrines have been built to date.

Touching the Untouchables, another local NGO, has been working to promote the concept of an “open defecation free” (ODF) community - meaning every household has built and is using their own toilet. Under criteria established by the NGO, 19 villages in Eastern Highlands Province have been declared ODF since 2007 - 16 in Obura-Wonenara district and three in Henganofi.

But this is a drop in the bucket. Thousands of villages across a country almost twice the size of the United Kingdom still practice open defecation. “It’s a small number, but you have to start somewhere,” said Esther Silas, the director, emphasizing that people are open to change, provided it is introduced in an acceptable way. “Properly funded, we would like to make Henganofi District (containing 80 villages) completely ODF, making it a role model for the whole country.”