Two murders committed in full view of the media and witnessed by French peacekeepers in the Central African Republic (CAR) this weekend have raised questions about security and the balance of forces in the capital, Bangui.

Reporters from IRIN and other media were present as two men were killed and their bodies burned at a roundabout on the Avenue Boganda in the south of the city on 19 January.

A French army patrol with an armoured vehicle, part of the Sangaris peacekeeping mission, was also at the scene, although it is not certain whether the killings witnessed by IRIN and other reporters were clearly visible to these soldiers or whether they were obscured by smoke and the crowd.

The murders were committed at around 10am after a group of young men had blocked off a road to the roundabout with rocks and a burning tyre.

A bystander, who preferred to withhold his name, said the young men were protesting because the previous day “Muslims abducted a taxi driver and executed him in Kilometre Cinq”, a neighbourhood where Muslims have concentrated.

He added that “Muslims accuse certain taxi drivers of handing Muslims over to the Central Africans to be executed”.

A largely Muslim rebel alliance, the Seleka, seized power in Bangui in March last year. Violence between the ex-Seleka (the alliance has been officially, but not effectively, been disbanded) and non-Muslim groups has escalated since then.

The first problem, which still exists, is what to do with the ex-Seleka. The second problem is how to prevent more inter-communal violence, and that means being able to police Bangui

Indiscriminate attacks by a non-Muslim militia known as the anti-balaka (the term roughly translates as “invincible”), and reprisals by the ex-Seleka led to at least 750 deaths in Bangui in early December, and casualties have continued to arrive at the city’s main hospital at a rate of 20 a day on average, Médecins Sans Frontières reported last week.

The NGO said the Muslim neighbourhoods in Boali, a town about 80 kilometres northwest of the capital, were empty, and that Muslims were also reported to have fled in large numbers from the towns of Bossembele, Yakole and Boyali, as well as many smaller villages and numerous neighborhoods around Bangui.

At around 9.30 on 19 January a mob of scores of people advanced up the Avenue Boganda towards the French army patrol, stationed about 100m from the roundabout.

A group of men stopped about 50m from the patrol and appeared to be hitting someone on the ground. Shortly afterwards, warning shots were fired and the patrol advanced, dispersing the mob, which retreated up a side street.

About 15 minutes later, the mob returned to the roundabout, where youths laid another tyre about 30m from a French armoured vehicle. They then dumped a corpse on the tyre, soaked it in petrol and set it alight. Some time later, another victim was dragged towards the tyre, hacked to death and then burned. The peacekeepers, who had by then been reinforced, did not intervene at this point.

A witness, Robert Demobenga, told IRIN the first victim had been stopped on his motorbike at the roundabout and asked if he knew about the taxi driver’s murder and if he had been involved.

“He said he knew nothing about it and then they executed him - beat him up,” said Demobenga.

The bystander who preferred to remain unnamed said: “They killed him because they found a list of names of young Central Africans in his pocket.”

Asked what they had done with this list, he said they had burned it, “because they were angry”.

A spokesman for Sangaris, Lt-Col Thomas Mollard, told IRIN the patrol managed to rescue two people from the crowd that day, but it was not able to save a third man.

Sangaris reacted to another serious incident the same day when a patrol was called to protect around 1,000 Muslims who had taken refuge at a church in the town of Boali about 90km from Bangui. Four people were reported killed there, and the mission’s intervention probably prevented much greater loss of life.

The Catholic priest at Boali opened the church to the Muslims, defying threats from the anti-balaka militia.


Commenting on the Avenue Boganda incident, Thierry Vircoulon, an analyst with the International Crisis Group in Bangui, said the Sangaris peacekeepers “are not equipped to do crowd management” as they do not have rubber bullets or tear gas and are not trained for that role.

He said the African Union Support Mission in CAR (MISCA) has a police contingent, but it is understrength and also ill equipped to carry out its mandate.

In December, Chadian troops with MISCA were heavily criticised for opening fire on violent mobs in Bangui. Since then, says Vircoulon, the Chadians have been keeping a low profile.

In the meantime, he says, the security situation in Bangui has changed, as there has been shift of power away from the ex-Seleka. 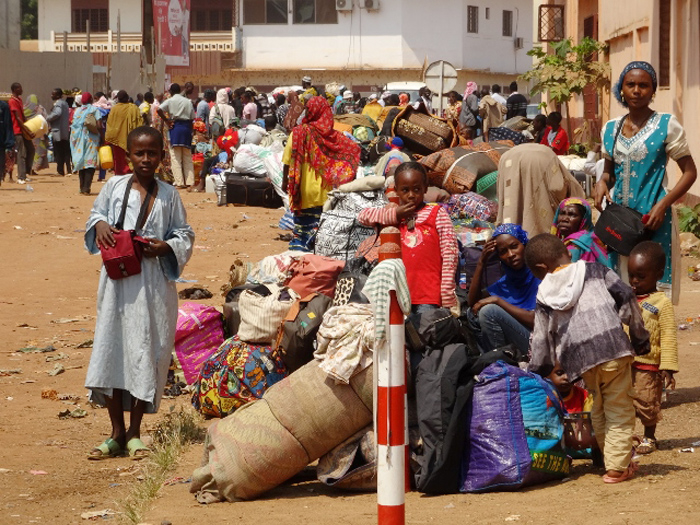 Until mid-December, “the ex-Seleka were running the place”, Vircoulon says, but they have since been confined to their barracks and their weapons are inventoried under a system monitored by the peacekeepers.

Although civilians report that some ex-Seleka are still in their neighbourhoods, they do not appear to control any main roads in daytime. A number of suspected ex-Seleka combatants have been lynched by mobs in recent weeks.

A Sangaris spokesman, Lt-Col Sebastien Pelissier, said recently that the ex-Seleka were not creating more trouble than the other militias, and that they are effectively confined to their barracks.

While there are almost certainly Muslims with weapons in some neighbourhoods, many other Muslim fighters are believed to have left Bangui.

Around 18,000 mainly Chadian Muslims have been evacuated to Chad, and others have left Bangui to go to Sudan, Cameroon and neighbouring CAR provinces.

The net result has been a reduction in ex-Seleka firepower, but it has also made Muslim civilians more vulnerable to mob violence.

While security has improved in Bangui, the anti-balaka and other anti-Muslim groups have continued attacking Muslim civilians and recently have been inviting media to watch, as on 19 January and a week earlier, when a man was filmed eating human flesh, which he told reporters was that of a killed Muslim.

“The first problem, which still exists, is what to do with the ex-Seleka," Vircoulon comments. “The second problem is how to prevent more inter-communal violence, and that means being able to police Bangui.”


In the past week, since the interim president Michel Djotodia resigned, elements of the CAR police, gendarmerie and army have been reassembling. Previously, they were too intimidated by the ex-Seleka to report for duty.

Donors have a project to re-open police stations. Vircoulon says this can only be implemented in close collaboration with the new government, which is currently forming after the election of Samba-Panza.

Speaking to the BBC about African and French troops deployed in CAR, Samba-Panza said, "The current numbers are not enough to restore security and order."

France currently has 1,600 troops in CAR and a further 4,400 have been deployed there from various other African countries. Several hundred troops are soon expected to be dispatched by the European Union.

Plans are in place for CAR security services to mount mixed patrols with the peacekeepers.

Meanwhile, the security situation may be deteriorating in the provinces. The World Food Programme (WFP) reported on 19 January that in the town of Bouar UN workers and families have taken refuge in a WFP compound, and that fighting between ex-Seleka and anti-balaka in the town of Sibut has restarted just days after the mayor brokered a reconciliation between the groups.

None of us wants to stay here. We can’t go anywhere in Bangui. We’re trapped

On 17 January, a grenade attack on a convoy of Muslims at Bouar was reported to have killed 10 people and wounded 50.


Tens of thousands of Muslims, mainly foreigners, have left CAR in the past two months. The International Organization for Migration (IOM), which has been assisting with evacuations, estimates that Muslims make up around 15 percent of the country’s population of up to five million.

In the worst case scenario, a high proportion of CAR’s Muslims could become targets of communal violence.

Jacques Seurt, IOM’s coordinator in CAR, commended Sangaris and MISCA for their support to evacuation convoys in Bangui, but commented that he did not think the two missions have enough troops to guard evacuations of Muslims from the interior.

However, he noted that Chadian troops have been guarding overland convoys of up to 2,000 people at a time.

Chadians, and some CAR citizens of Chadian origin, who had gathered at Bangui airport for a flight to Chad on 19 January, called for more protection from Sangaris and MISCA. Several of them praised the Burundian contingent of MISCA, who they said were doing a good job.

“The Burundians protect our people and don’t disarm them when they retreat,” said one man, “while the others disarm them and sometimes push them back towards their enemies.”

The group evacuated on 19 January were nearly all refugees from Chad or their dependents. After consultations with UNHCR, they had decided they would be less risk returning to Chad than staying in CAR. UNHCR said it would monitor their situation to see they were not persecuted in Chad.

Among the refugees’ dependents was a young man, Mahmat Addam, who said his uncle Bashir was one of the two men burned on the Avenue Boganda that morning.

He told IRIN he had been with his uncle that morning before Bashir had gone to collect a debt he was owed at a market.

“He was killed on the way back, and I’m sure it was by people who knew him,” Addam said.

“None of us wants to stay here. We can’t go anywhere in Bangui. We’re trapped.”