Ilham Nori Wahid’s eyes fill with tears as he speaks about the bomb attack that left him wounded, and killed his friends and neighbours in northern Iraq’s Kirkuk province.

“The sound was so loud that I couldn’t hear anything for three days afterwards. There were five people in front of me and all of them were killed.”

The blast came as people were leaving Al-Quds mosque on the first day of the Muslim celebration, Eid al-Adha. Wahid survived, but now has to cope with his physical and psychological scars in a country where violence is at its highest level in five years and the healthcare system is struggling to respond to the needs of patients.

Over 135,000 Iraqi civilians were injured in conflict and violence between March 2003 and March 2013 according to Iraq Body Count, but figures from the Iraqi Human Rights Ministry put the number at 250,000 by May 2012. So far in 2013, the French news agency, Agence France-Presse has documented almost 15,000 Iraqis wounded in violence.

“I was lucky,” Wahid told IRIN. “The shrapnel in my hand and foot came out, so they didn’t need to operate. But I don’t think the general treatment [in the hospital] was very good, and because of this, my wound is going to take a long time to heal.” The only medication he received was pain killers.

While he spoke, his nephew changed the bandage on his arm. He also has wounds on his legs and feet from flying debris, and his vertebrae are bruised where the force of the explosion threw him against the mosque wall.

Iraq’s healthcare system was already weak due to international sanctions following the first Gulf War in 1991, and the American-led invasion in 2003 further eroded healthcare delivery to very low levels.

The situation has improved since then, in part due to increases in the health budget in the last decade, but there are still major challenges.

Every time I remember the attack I start crying... All of us who were wounded in the same attack - we need treatment for this

After intense sectarian violence across Iraq between 2006 and 2008, medical charity Médecins Sans Frontières (MSF) said in 2009 that a “lack of resources and the necessary conditions” meant Iraq’s healthcare system was unable to provide “severely wounded and mutilated patients” with the critical care needed for their recovery.

The healthcare infrastructure still “struggles to rebuild itself, having adequate financial resources, but with a shortage of skills and strategies”, the British medical journal, The Lancet, noted in Health Services in Iraq, an article published earlier this year. The authors, professors Thamer Kadum Al Hilfi, Riyadh Lafta and Gilbert Burnham, added that continuing sectarian violence “makes even the best plans difficult to implement”.

Wounded patients across Iraq told IRIN that government hospitals do not have the necessary equipment and medicines to deal with their injuries – typically amputated limbs and shrapnel wounds.

“The equipment is old and we don’t have the new facilities we need because they are very expensive,” said Dr Ahmed Abeid, a neurosurgeon in the capital, Baghdad. Hospitals are prepared for emergency trauma care, but not for more complicated surgical operations requiring advanced equipment, he added.

Many survivors struggle to pay for private doctors and medical services in Iraq, or travel to neighbouring countries for medical care when local public health services and facilities are found to be inadequate.

Faiza Abbas had to sell her car to raise the $12,000 she needed to pay for treatment in private hospitals after she was shot at by US troops in 2007 when she accidentally drove past a stop sign at a roadblock. A bullet ripped her shoulder open, shrapnel tore through her cheek into her mouth, her left eardrum popped and bits of glass from the shattered car window entered her eye.

“I had [eye] surgery three times in the [free] public hospital and they didn’t make me better… There are tools to remove the small pieces of glass, but in the public hospitals they don’t have… [them]. They don’t have the tools for their work - this is their problem.”

The Ministry of Health did not respond to IRIN’s request for an interview. But in Kirkuk, one of Iraq’s most dangerous cities, Dr Daylan Ahmed, an oncologist at the Azadi Teaching Hospital, said facilities there were adequate and patients travelled for care elsewhere only because of the lack of security.

“There is some reconstructive capacity in private clinics around Baghdad, but it is costly,” and treatments like physiotherapy follow-ups are still lacking, Marc Schakal, head of MSF’s mission in Iraq and Jordan, told IRIN.

He also pointed to a general shortage of surgeons to perform reconstructions. In some hospitals, he added, management and bureaucracy, political issues and a lack of capacity to provide secondary support services, such as laundry and food, remain challenges.

MSF is trying to develop partnerships with local health services so that more patients can be treated in Iraq.

Iraq’s healthcare spending has risen from 3.6 percent of GDP in 2003 to 8.3 percent in 2011, according to World Bank figures. But the UN Joint Analysis Policy Unit (JAPU) notes that the funds allocated in the 2013 budget to development areas, such as health, are insufficient when compared with Iraq’s needs.

In 2013, the total investment budget to education, health and environment, culture and youth, and water and sanitation is 6.5 trillion Iraqi dinars (US$5.6 billion), “equivalent to barely 50 percent of the energy sector investment budget,” JAPU said in a background paper. In 2011, the Iraqi government spent just 58 percent of its health budget, JAPU pointed out.

Many health personnel have migrated in what has been dubbed Iraq’s brain drain. Citing official Iraqi sources, a report by the International Committee of the Red Cross said 20,000 of the 34,000 doctors registered in Iraq in 1990 had left the country by 2007, another 2,200 were murdered and 250 were kidnapped between 2003 and 2007.

Young doctors at Azidi Teaching Hospital in Iraq's contested Kirkuk province. Violence in Iraq is at its highest level in five years, yet the healthcare system is still struggling to recover from decades of sanctions and war. 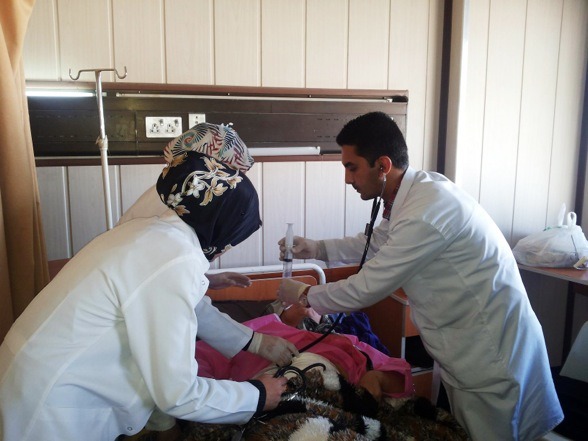 The World Health Organization (WHO) reported that the ratio of doctors to population in 2011 was 7.8 per 10,000 – much lower than regional neighbours such as Jordan and Lebanon.

The internal migration of health professionals to safer areas such as the northern Kurdistan region means less secure regions - which need skilled medical professionals the most - find themselves with the fewest, further compounding the problem.

Hospital staff and patients also complain about a lack of long-term psychological care.

“My problem is not only my wound; I have psychological problems,” said Wahid. “Every time I remember the attack I start crying, and every time I go to the mosque I feel bad. All of us who were wounded in the same attack - we need treatment for this.”

WHO estimates that 35.5 percent of the population suffered from mental disorders in 2009; and only six percent of them received treatment.

At the Azadi Teaching Hospital, Ahmed said that while the facility does have a psychiatric unit, there is little follow-up.

“When the patient leaves the hospital, we don’t know the outcome of the case later on, in terms of psychological trauma… We don’t have a programme to go with the patients back to the home …This is very, very important.”