In Latin America, where violent crime rates are six times higher than in any other region and where most residents have reported distrust in the state’s ability to fight crime, a number of communities have taken to social media to boost security, say analysts.

Violent crime has soared in the past decade with murder rates for Latin and Central America four times the global average in 2011, at 29 per 100,000 people, according to a 2013 UN Development Programme (UNDP) report.

In parallel, internet access in Latin America has multiplied thirteenfold in the past decade, providing communities with an alternative way to report crimes in near anonymity, share information on violence hotspots, mobilize community policing and organize protests calling for greater security.

“The use of big data and social media can allow for the scale, speed and specificity that most traditional approaches [to fighting crime] lack,” Igarapé Institute director Robert Muggah told IRIN from Rio de Janeiro, Brazil, where he manages security and development projects across the region.

While governments, such as those of Mexico, Brazil and Argentina, have made efforts in the past decade to improve police forces, continued mistrust in public institutions (alongside fear of drug gangs) has led to what the Igarapé Institute calls “horizontal citizen-to-citizen initiatives” - ordinary people banding together with smartphones and social media to protect themselves from crime.

But while social media is a potent tool to stem violence, it is merely reactive, and cannot replace economic development in crime-ridden neighbourhoods, or a long-term police presence to build community trust, say experts.

Citizens' perceptions that the government cannot protect them are due to the lack of sustained engagement of state security forces in communities hit by gang violence, according to the Brookings Institution.

“The first step is to bring the state in in an accountable way. The role of the state is inescapable [in its] responsibility to provide safety and economic development for marginalized people,” said Felbab-Brown.

In some of the most crime-addled communities in Latin and Central America, citizens are reluctant to report crimes to officials because they either fear reprisals (and state complicity) or simply lack faith in police efficacy, according to surveys. One 2012 study found 92 percent of crime in Mexico goes unreported.

“Many victims of violence may not go through public institutions and may seek care or justice redress in other ways,” said Ronak Patel, a researcher with the US-based Harvard Humanitarian Initiative (HHI) and co-author of a 2012 report on urbanization and insecurity.

In 2010 the Argentinian government invested US$250 million in the police, establishing five regional centres to take emergency calls, with pledges to answer all calls within 15 seconds, and 1,200 surveillance cameras stationed throughout Buenos Aires. Since October 2011, the government's urban safety plan has required police to be stationed “day and night” in the city’s “critical points”.

“[We] have the sensation that there is collusion between the police and the robbers, so people are afraid to denounce the police,” said Leonardo Florestano, 32, a local from Buenos Aires who has been robbed four times in the past decade and whose brother-in-law survived a gun attack outside an Adidas shoe store three years ago.

“If you ask any Argentinean living in the city, we will tell you that we feel more and more insecure because everyone has been robbed before," he added.

Meanwhile, in Mexico's Ciudad Juarez - one of the most violent cities in the world, according to a March 2013 study in the International Journal of Stability - neighbourhood groups have taken crime management into their own hands, or smartphones.

Communities rely on text messaging and mobile calls to alert one another about crimes, said Finn Kjaerulf, a programme manager focusing on slum violence at the Copenhagen-based Dignity Institute.

Intimidation of the media by drug cartels in Mexican cities like Saltillo and Monterrey has led to a near-total vacuum in crime reporting by mainstream media in recent years; press freedom organizations internationally rank Mexico among the most dangerous countries for reporters.

A number of blogs and microblogs, such as Twitter, have emerged to fill the void.

“This [blog] is the only way for us to really know what is going on,” said Martha Montoya, a 29-year-old teacher from Saltillo in northeastern Mexico.

Between August 2010 and November 2011 residents in four Mexican cities surveyed (including Saltillo) sent nearly 600,000 of what Microsoft called “narcotweets” in its 2012 research on how people living in armed conflict have turned to microblogging “as a participatory news platform, in lieu of damaged state and media apparatuses”.

The greatest advantage of social media and crisis mapping for fighting crime is the near-anonymity they afford, which in turn increases the number of crimes recorded, according to Patel. 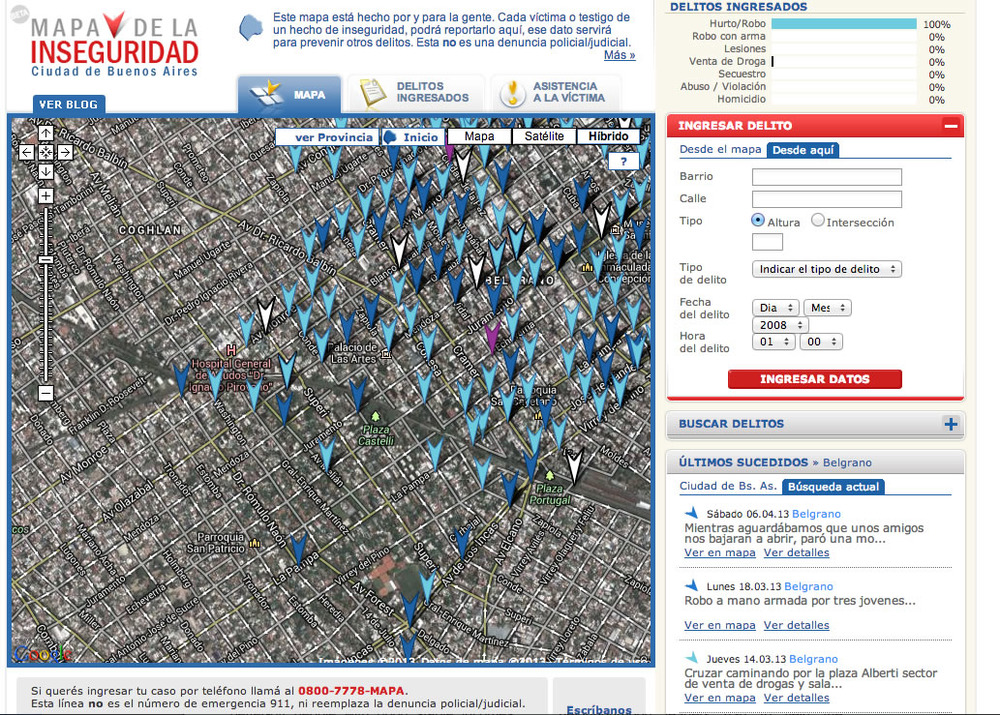 CIC receives thousands of texts, tweets, Facebook posts, emails, calls and drop-ins reporting crimes every day, according to its records. The organization compiles social media reports for the authorities to review and investigate.

Data generated by citizen-to-citizen initiatives can provide the state with “a banquet of new information sources to counter human security threats”, said Felbab-Brown.

Within a week of Insecurity Map’s launch in 2009, citizens reported more than 2,000 crimes to the NGO running the map - including abductions, armed robberies and homicides.

“This kind of information, which can provide more precise data on the time of incidents, the places they occur, the perpetrators and victims, and latent trends and correlations, is critical for preventing and reducing violence,” said Igarapé Institute’s Muggah.

“Big data”, or the “traces of human action picked up by digital devices”, according to the International Peace Institute (IPI) carries an inherent risk of bias and excludes people without access, cautioned Patel from Harvard Humanitarian Initiative.

“It does bias this data towards those with the means and ability to use such technology,” said Patel.

It can also be difficult to verify the truth of data and reported incidents, and sift the truth from the tales, thus requiring triangulation with other types of data sources, such as traditional media or government-generated crime reports.

As people turn to “big data” out of frustration - even desperation - experts caution that data has its limits, as well as dangers.

One concern is criminals accessing user-friendly crime mapping and social media, and potentially endangering the lives of “civic curators”, Patrick Vinck, director of the Program on Vulnerable Populations at the Harvard School of Public Health, told IRIN.

"The internet has not just empowered citizens to exercise their rights, but also enabled and extended the reach of gangs, cartels and organized criminals"

In Mexico, at least four bloggers have been murdered in recent years after criminals traced their identities, according to local news reports. Their bodies were placed in public areas with threats pinned to them, an effort to discourage further citizen reports.

“Criminals themselves have thought to exploit technology,” said Felbab-Brown.

“The internet has not just empowered citizens to exercise their rights, but also enabled and extended the reach of gangs, cartels and organized criminals,” reported Igarapé Institute in a June 2012 study on cyber crime, which found cyber-crime threats are highest in countries with the greatest number of online users, including Argentina, Brazil and Mexico.

The international police body, Interpol, has called cyber-crime one of the fastest growing areas of crime with "more and more criminals... exploiting the speed, convenience and anonymity that modern technologies offer in order to commit a diverse range of criminal activities", including identity theft, the distribution of child sexual abuse images, internet auction fraud and email scams such as phishing.

No matter what citizen initiatives abound in Latin America, there needs to be “a fundamental redesign of the social contract between the vast segments of society living in poverty and the margins [and the state]” to reduce criminality, said Felbab-Brown.

“There are limits to what can be accomplished” without trust in the state - or its involvement - she concluded.