The scrapping of part of a law encouraging political balance in Iraq’s most ethnically divided province has added to growing pessimism among residents of Kirkuk about the resolution of long-standing disputes over power-sharing.

The province is home to Arabs, Kurds, Turkmen and other ethnic groups, but many argue their representation on the governing Provincial Council does not accurately reflect their percentage of the population. Provincial elections - seen by many as the solution to the perceived power imbalance - have not been held since 2005.

In late August, the federal court of Iraq struck down two paragraphs of Article 23 of the Provincial Election Law, which aimed at consensus among Kirkuk’s ethno-religious groups on when and how to hold the province’s much-needed and long-delayed elections.

The court argued that a multi-ethnic committee established by the article was not an effective way to draft an election law. Instead, the legal committee inside Iraq’s Council of Representatives, the national legislative chamber, has just completed drafting a new special election law for Kirkuk, which now awaits first reading. The committee has three representatives from Kirkuk, one from each of the main ethnic groups.

“We believe the federal court did a good job when it cancelled the paragraphs in Article 23 because it was based on having consensus - and this seems to be impossible in Kirkuk,” said Awat Mohammed Amin, a Kurdish member of Kirkuk’s Provincial Council. “We shouldn’t expect all parties should agree 100 percent. Instead we should work on the basis of majority agreements.”

But the move has been met with despair by Arabs and Turkmen, who argue the law tried to ensure they were properly represented. Without it, they feel decision-making may be taken out of their hands and that any future election might not be fair.

Kirkuk’s population is around 40 percent Arab, 40 percent Kurdish, 19 percent Turkmen and 1 percent Christian, according to an unofficial count of the civil registration, figures from the Ministry of Trade (which distributes food ration stamps to Iraqi families) and the voter register. No official census has been taken.

“Article 23 was a symbol of the consensus of Kirkuk,” said Hasan Toran, leader of the Provincial Council and a member of its Iraqi Turkmen group. All parties agreed to the law when it was put into place in 2008, he said, but not everyone was consulted before it was cancelled.

Kirkuk’s residents have been subjected to political manoeuvring for decades, first under the policies of former president Saddam Hussein, who forcibly removed Kurdish families and brought Arab families to the oil-rich province from the south and centre of Iraq, in an attempt to change its demographics. Now, the territorial dispute remains between Prime Minister Nouri al-Maliki’s Shia-led government in Baghdad and the semi-autonomous Kurdistan Regional Government (KRG) in the north, both of which are jockeying for power over Kirkuk and other territories along the unofficial dividing line.

Under Article 140 of the Iraqi constitution, introduced in 2005, Hussein’s “Arabization” policy was reversed. Arab families were given money to relocate and Kurdish families encouraged to move back. But a referendum due in 2007 on who would take power - Baghdad or Erbil - never took place, leaving Kirkukis in limbo.

“From the perspective of the Iraqi Arabs and Iraqi Turkmen, Article 23 was the countervailing force against Article 140,” said Ahmed Ali, a research analyst at the Institute for the Study of War. “The recent changes to it will make them feel that decisions pertinent to the province are subject to politics rather than an attempt to find a solution.”

“For Turkmen, Article [23] was imposing some balance to Kirkuk Governorate. It emphasized the participation of all ethnic groups,” said Raad Rushdi Agah, a Turkmen member of the Provincial Council. “After the cancellation, the [Kurdish] majority in the council can get all the key positions, according to voting in the council.” 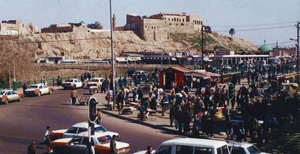 The Kurds argue the lack of Arab representation on the council is due to an Arab boycott of the 2005 provincial election.

Article 23 provided for power sharing by aiming to divide the administrative and security powers and public posts equally among the three ethnic groups. It also tried to set out a roadmap for elections in Kirkuk, via the establishment of a multi-ethnic committee required to reach a consensus on the terms for a provincial election, but no agreement was reached.

After the annulment of these provisions, some groups in Kirkuk now feel they are even further from a resolution over the province’s power-sharing problems.

Analysts say this political infighting has weakened and destabilized the province, opening the door to increased violence by militant groups operating across the country, largely along Sunni-Shia dividing lines.

Local interethnic tensions add to the instability in Kirkuk.

“After a political development, we find violence in Kirkuk,” said a senior political analyst in the city. “Most of the violations are politically motivated.”

As such, a resolution to the problems of local representation could go some way to reducing attacks in the city, residents and experts said. Arabs and Turkmen argue that better representation within the Kurdish-led security forces would help curb the violence.

But an agreement on local power-sharing will likely have little impact on the wider territorial dispute between Maliki’s government and the Kurds, the senior political analyst in the city said.

Earlier this year, Maliki’s forces engaged in a stand-off with Kurdish security forces over control of territory in the oil-rich province. They avoided outright conflict, but the incident raised fears that the Baghdad-KRG split could turn violent.

While Kirkuk Province is divided into Kurdish, Turkmen and Arab areas, Kirkuk City is a microcosm of all the ethno-sectarian groups. Osama Falah and his friends - a group of twenty-somethings interested in socializing, smoking sheesha and drinking tea in the city’s cafés - are a perfect example.

Falah is an Arab from Baghdad, who came to Kirkuk in 2005 after his cousins were kidnapped by militia in the capital. But his friends cross Kirkuk’s ethnic divides and “this is normal for me,” he said.

Kirkuk’s residents intermingle, intermarry, and speak a variety of tongues. In one Turkmen/Arab household in the guarded neighbourhood of Arafa, Kurdish and Assyrian Christian friends come and go. Rice with currants steams on the stove as family members translate for one another: four languages can be heard between generations.

Yet however strong interethnic ties may be socially, the ethnic balance is still fragile, even for people like Falah.

"It will be wonderful to have an election in Kirkuk because we need a change in the governorate. It is not important who I will elect, but it is important that they will love Iraq."

“They are not looking out for us in the Kirkuk government; they protect just the Kurdish people,” he said.

Politicians divided along ethnic lines continue to blame each other for the province’s problems, as bombings by al-Qaeda and other militant groups continue with worrying regularity, and residents feel unsafe.

In 2005, Wael Yousif, a general with the Kirkuk police force, was assassinated outside his home after receiving threats because he worked for the police and was a Christian.

His family’s home is now securely guarded by high walls. The living room is full of emblems of church and family life - carvings of Jesus and angels, pictures of Yousif and his daughters. Over slices of cake, his wife Maha describes years of living in fear. She dreams of living in a safe place. His daughter, Rita Wael, thinks elections could be part of the solution, if all groups work together.

“It will be wonderful to have an election in Kirkuk because we need a change in the governorate; we hope that the [politicians] will work for Kirkuk and not for personal goals.” If an election happens, she adds, "it is not important who I will elect, but it is important that they will love Iraq”.