To someone who has never injected illicit drugs, all syringes may look similar, but recent research out of the US shows differences in design can be “dramatic” and may slow the spread of HIV infections.

Better syringe design could “nearly eradicate global HIV [related to people who inject drugs] infections within eight years”, according to the US-based health consultancy RTI International, based on research it published this past January.

When fully depressed, all syringes retain some fluid in an area called “dead space”, including blood particles that can carry infection. However, some syringes retain more than others. “High-dead space syringes” (HDSS) can retain 1,000 times more blood than the amount remaining in a “low-dead space syringe” (LDSS) after depressing the plunger and rinsing the syringe, according to RTI.

By reducing the amount of retained fluid, some researchers say the risk of passing on blood-borne diseases is also reduced.

In 2012, the World Health Organization, UNAIDS and the UN Office on Drugs and Crime jointly recommended improving access to LDSS.

But these syringes are not often available to drug users, Rob Gray, a technical advisor for the international NGO Population Services International (PSI), told IRIN from Vientiane, Laos.

Gray said it was “very difficult” to estimate the numbers of LDSS in circulation because there are hundreds of “harm reduction” projects aiming to minimize damage from injecting drugs globally. “And no one keeps track of the overall picture [of supplies],” said Gray.

As of 2012, there were 97 countries - of the 158 countries and territories where injecting drug use has been reported - supporting harm reduction in policy or practice, according to Harm Reduction International.

“When I look at harm reduction globally, the shocking reality is that most harm reduction programmes are not only failing to provide LDSS as an option for drug users, but they are not even thinking about it right now,” Gray added.

Atul Ambekar and Aditya Pawar, from the National Drug Dependence Treatment Centre at the All India Medical Institute of Sciences in New Delhi, have called evidence supporting LDSS as an HIV-prevention measure “meagre”. They say favourable laboratory results on reducing HIV infections only apply to 1ml syringes with permanently attached needles.

“In other syringes, the advantage may not be maintained to this magnitude,” they wrote.

Sam Nugraha, regional coordinator of the Asian Network of People who Use Drugs (ANPUD), said the idea of LDSS is good, but that the main problem in cutting HIV infections is that police prevent drug users from getting access to any kind of needle or syringe, even if a health ministry allows outreach programmes to distribute them.

“Outreach workers go to the field with needles, and then the police are arresting them because the police think that, under the law, they are protecting people,” said Nugraha.

The distance drug users have to travel to obtain LDSS - which is scarcer than HDSS - is another problem, he said.

Saying goodbye to high-dead-space syringes, an article by Dan Ciccarone, a professor at the University of California, San Francisco, published in the International Journal of Drug Policy, notes that consumer choice is a big unknown, and “as vein access gets more difficult, users get more pernickety and brand loyal.”

He wrote: “IDUs [injecting drug users] who ‘muscle’ or inject in large central veins may be used to injecting with long 1.5-inch, thin (25 gauge) needles; will they accept thicker (and slightly more painful) 21 gauge low-dead space needles that are currently available?”

There are an estimated 43,000 IDUs in Thailand 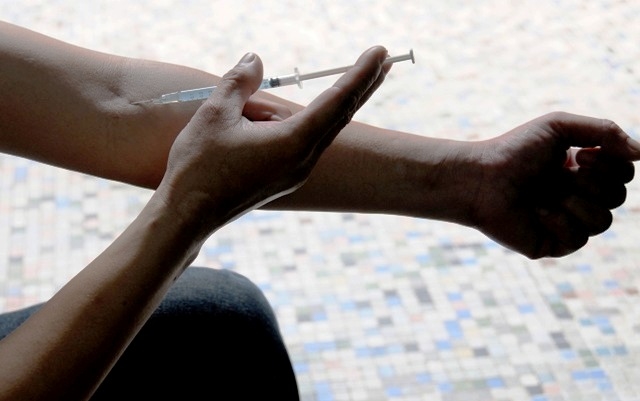 “There’s a lot of work that needs to be done informing the [syringe] beneficiaries about the issue,” acknowledged PSI’s Gray. “A lot of work needs to be done with the manufacturers of the product because it’s absolutely possible to produce a better product… [More outreach is also needed to educate] the people who are providing needles and syringes.”

In Vietnam, PSI set up the country’s first “social marketing” (marketing for the good of society) pilot project in 2012, studying the habits of people who inject drugs in the country’s two most populous cities, Ho Chi Minh City and Hanoi.

The project communicated with pharmacies in both cities to raise awareness about LDSS, and convinced tea stall owners in Hanoi and roadside cigarette vendors in Ho Chi Minh City to sell LDSS after pharmacies, the main source of syringes for drug users, closed.

In about half the country’s provinces, donors have funded limited distribution of no-cost syringes in recent years.

There are up to 336,000 people who inject drugs in Vietnam; IDUs make up 65 per cent of people living with HIV nationwide. Sharing rates were as high as 37 per cent, according to 2009 government research, although recent anecdotal feedback from harm-reduction staff working in 10 of the provinces with the highest numbers of drug users indicates needle sharing has plummeted from those levels.

Even so, in 2012 injection drug use was the reported mode of transmission for nearly 38 percent of the country’s 14,125 newly diagnosed cases of HIV, according to the government.

In both Hanoi and Ho Chi Minh City, behaviours and preferences for syringes varied, according to a PSI assessment conducted in 2011. Drug users in the Hanoi study, who did not have access to LDSS prior to the pilot, were asked to test and give feedback on an LDSS made by the German company Braun, which produces syringes under the brand name Omnican.

“I like it because it is tiny,” one female drug user quoted in the study said. “I can put this one in any place, like in my wallet, so I feel safe when carrying it.”

Others said they liked it because the needle could be detached if the syringe got stuck so no drugs would be lost. A high-quality needle was also preferred because it was sharp and would not leave scars. However, a shorter needle was not long enough for those who preferred to inject into the femoral vein in the groin. Some users reported the 1ml syringe was too small to mix drugs.

“Without shaking, the drug cannot dissolve. Now the quality of the drug is different than before when it used to dissolve right away, but I have to shake for quite a while because it needs space to fully dissolve,” one male drug user was quoted as saying.

The problem is not only about demand, but also supply, said PSI’s Gray. Manufacturers are scattered around the world, and improving the supply chain will be a “daunting” task, he said. The most commonly sold syringe in Vietnam is a standard 3ml syringe used in health centres, which can be manufactured locally.

“The critics say you won’t be able to convince everyone to switch over to LDSS. I reject that as a reason not to work on this issue,” he said. “Even if you can help only 10 per cent of drug users to choose LDSS, for example, it would still be worth it because if the laboratory studies hold any water at all, we would be reducing transmission of HIV and other blood-borne viruses in massive numbers - even though we wouldn’t be providing a solution for every drug user in the world.”

There are an estimated 14 million people who inject drugs worldwide*, of whom up to 3 million are infected with HIV.

*An earlier version of this report gave an outdated figure, and has since been corrected