The restrictions come on top of other constraints facing medical aid deliveries, including the hijacking of aid convoys, attributed to armed opposition groups and criminal elements.

"[Deliveries] were almost at a standstill at the end of the second quarter of 2013," Elizabeth Hoff, representative of the World Health Organization (WHO) in Syria, told IRIN.

Whereas WHO was able to send "a substantial number" of emergency medical kits in the first three months of the year (enough to serve 914,000 people), the number of beneficiaries reached by these kits between April and June dropped to 270,500, because the UN agency could not get the necessary permissions from the government. WHO also faced similar challenges to send medicines and medical equipment, including ventilators, defibrillators, and incubators.

Aid workers say the government fears that medical supplies could be used to treat wounded rebels. Under international humanitarian law, parties to a conflict must allow the free passage of medical supplies to civilians, even if they are loyal to the enemy. However, the obligation each party has to allow access is subject to it being satisfied that the consignments will not be diverted from their destination; that control over the goods is effective; and that the enemy's military efforts or economy will not accrue a definite advantage as a result of the aid.

"There is a restriction explicitly from the Ministry of Health that no surgical items or any items that can assist the opposition be filtered to those areas," said Laila Baker, head of the UN Population Fund (UNFPA) in Syria, which assists women with reproductive health issues. "We're not sending medical aid to any armed groups. For us, a civilian is a civilian."

In a July update to donors, WHO wrote: "The delivery of essential medicines and medical supplies to those most in need in both government- and opposition-controlled areas has been severely hampered over the past couple of months. Critical medical products, including as part of interagency convoys, have been prevented from reaching affected locations, undermining health care availability for trauma and disease control."

After more than two years of conflict between the government and armed opposition forces, Syria's healthcare system has broken down, hospitals have been destroyed, medical personnel have fled the country and many medicines are no longer available or prohibitively expensive. As such, many people are dependent on aid. In addition, WHO estimates close to 500,000 Syrians - both civilians and combatants - are currently injured.

Access to health care in opposition-controlled areas has deteriorated even more quickly than elsewhere in the country. Outbreaks of measles signal a breakdown in routine vaccinations and, according to Médecins sans Frontières, which supports several field hospitals and health posts in the rebel-controlled north. Medicines for chronic diseases including diabetes and hypertension are particularly in demand. Some dialysis centres, on which people depend for life-saving treatment, are no longer functioning.

"We have been under siege for 14 months," said an activist in Homs who calls himself Yazan. "We only have makeshift clinics and very limited means to help sick or injured people." Doctors lack the necessary equipment to treat wounds caused by bullets or shrapnel; in many cases, their only option is to amputate limbs, he said.

Residents inside rebel-held areas around Damascus have similarly run out of most medical items after months of siege. Something as simple as rehydration salts might have saved a four-year-old girl who was recently suffering from indigestion in the district of Hajar al Aswad. "She was vomiting and dehydrated," said Susan Ahmed*, an activist in central Damascus. "She would have needed some medicine, but nothing was available. So, her mother had to watch her die."

"Now medical aid in this country is incredibly partial. We cannot work impartially."

Violence and insecurity have played a large role in the decline in healthcare, interrupting supply routes and making it hard for people to access health facilities where they still exist. In some cases, health facilities and providers have been specifically targeted.

According to Suheib, a student in rural Aleppo, the only hospital in his area can no longer be used because the Islamist group Jabhat al-Nusra has set up camp there. In addition, aid workers say armed opposition groups and criminal elements have hijacked goods to redistribute them to their supporters or to re-sell them on the market.

"If the [rebel] Free Syrian Army hijacks a shipment at the entry point to Aleppo and says 'Sorry, nothing goes to the government [areas]', it's the flipside of the same coin for me," Baker said. "We want all of the restrictions lifted, no matter what they are."

But in rebel-held areas, especially in northern Syria, a deliberate government policy to withhold medical aid is a larger impediment, the opposition says.

"The whole health system in the liberated area is under boycott. It's paralysed. So they don't have anything," said Adib Shishakly, vice-president of the Syrian opposition's Assistance Coordination Unit (ACU), responsible for coordinating aid in rebel-held areas. ACU is a branch of the National Coalition of Syrian Revolution and Opposition Forces, but claims to be a non-political, neutral body.

At the end of May, WHO's Hoff said, all medicines and medical equipment were removed from an aid convoy headed for Idlib Governorate, which is mostly controlled by the opposition.

In early June, WHO received reports of 1,200 cases of diarrhoea in Talbiseh town in the rebel stronghold of Homs. WHO and the UN Children's Fund (UNICEF) prepared standard diarrhoea kits to send to the area, but 70 percent of the kits' contents were removed, Hoff said. What arrived after a significant delay were five "amputated" kits, lacking items that could be used for surgery, including intravenous fluid and infusion sets crucial for rehydrating victims of acute or bloody diarrhoea.

"They dismantle these medical kits at the checkpoints," said one aid worker who did not want to be named. "At every single checkpoint, they take out bits and pieces, because they say it could be serving to help combatants."

Shishakly said medical items that UN agencies tell him they have sent often do not arrive at their destination in rebel-controlled areas.

"It's becoming incredibly difficult for us to get anything medical to the opposition side," said a second aid worker, based in Damascus. "It has always been difficult. But now [there has been] a real hardening of the position. It seems to me that there has been a shift - a worsening of medical access.

"Now medical aid in this country is incredibly partial," he added. "We cannot work impartially."

In recent weeks, after intense lobbying by the highest levels of the UN, the situation has improved, WHO's Hoff said. The organization has just ordered $22 million of medicines for delivery, and a large shipment of medical supplies, including three surgical kits, is currently en route to Idlib.

"Very, very little medical aid is getting into liberated areas from anywhere but the Turkish border," Samer Araabi, ACU's Turkey-based advocacy manager, told IRIN. Still, he said cross-border medical aid delivered by ACU and others is "a drop in the bucket compared to the total need".

"It's almost impossible to fill [the gap]," added Shishakly, describing ACU's resources as "extremely minimal" covering no more than 10-15 percent of the needs.

Aleppo: Inside a secret field hospital of the Free Syrian Army (FSA) 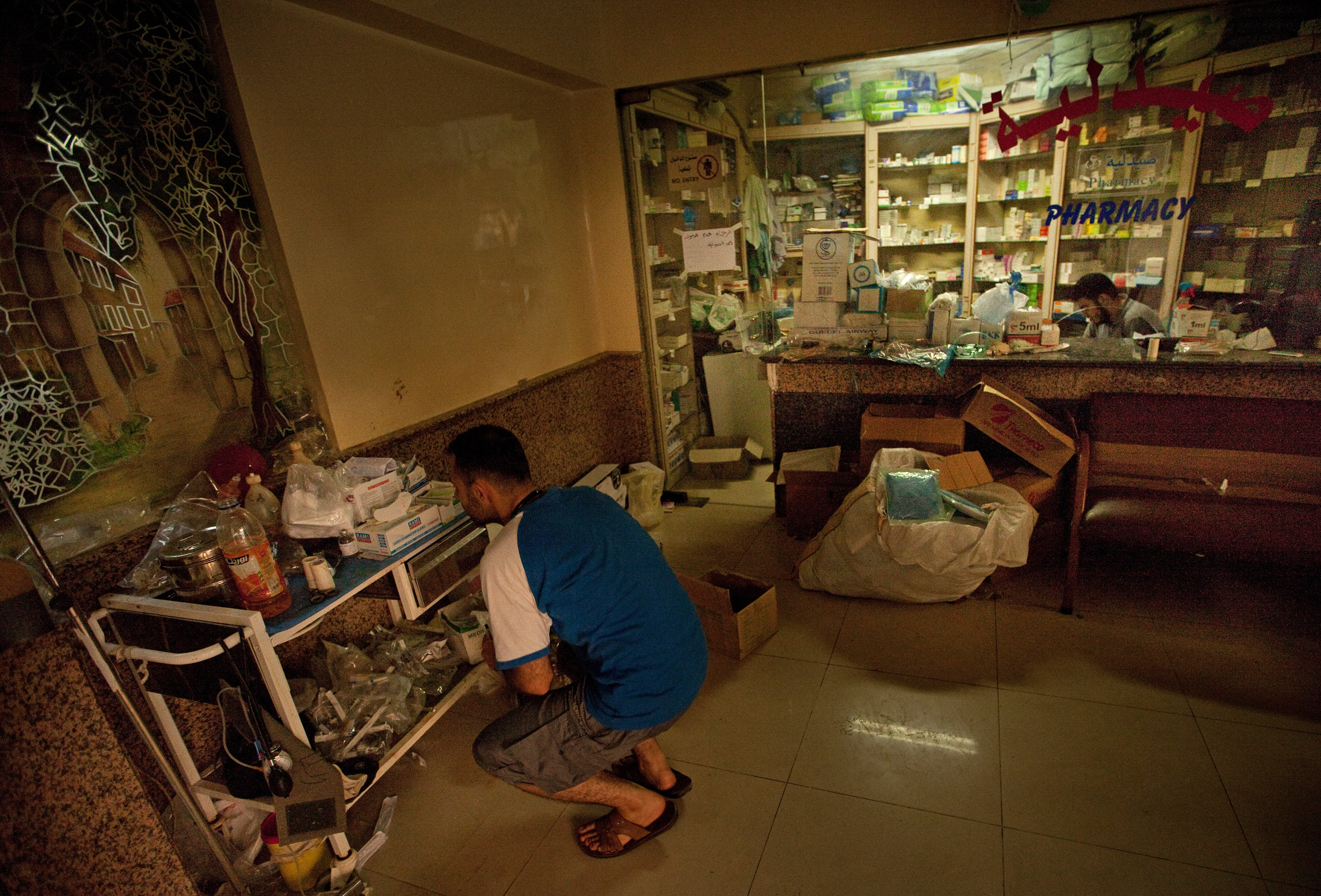 Because insecurity is such a constraint for international NGOs operating illegally in northern Syria, most of the medical aid in the north is provided by Syrian diaspora networks, like the Union of Syrian Medical Relief Organizations. The areas affected by the fighting have also been receiving some supplies from Qatar and Saudi Arabia, according to Suheib, the student in Aleppo, particularly medicine for Leishmaniasis, a skin disease that has been spreading because of a lack of hygiene.

While access from the Turkish border is relatively unfettered, Araabi said ACU did face pressure from groups like the Free Syrian Army to supply rebels with medical supplies, but insisted their aid was for civilians only.

An assessment of the rebel-held north conducted by ACU in May found that "the most widely described priority needs are in the health sector" - a shift from earlier this year, when food was considered a greater priority. Of 15.6 million people living in the seven northern governorates of Syria, 10.3 million lived in areas where health services were insufficient, the assessment found (some aid workers have questioned the veracity of ACU's assessments, arguing the numbers appear exaggerated). Three out of 106 sub-districts reported that "many people are dying now because health services are insufficient". Ten others reported that "many people will die soon."

"A lot of people bleed to death because there is nothing to stop the bleeding," Shishakly said. Because of the severe shortage in medicines, Musab Alguetadh, a rebel spokesman in Rural Damascus added, "sometimes people die as a result of minor injuries. The regime forces have imposed a suffocating blockade on most areas of Damascus."

Trying to smuggle medical aid supplies into rebel-held areas of Rural Damascus is extremely dangerous, Ahmed, the activist, said. "If the soldiers catch you with food, they usually take it and spill it on the streets. If they catch you with medicine, you might be killed."

As a result, residents have resorted to desperate means. Activists have been throwing plastic bags filled with medical supplies into besieged neighbourhoods of Muadhamiya, outside Damascus, from nearby streets. One young man on the other side was shot and killed by a sniper when trying to reach the plastic bag, Ahmed said.

Despite the restrictions, WHO has maintained its support for many local NGOs, who have collectively provided health care for 60,000 people in areas off-limits to the government, especially in Aleppo, Homs and Rural Damascus. Together with the Ministry of Health, it has also established an Early Warning Alert and Response System (EWARS) for communicable diseases, which Hoff said is "working very well across Syria."

Overall, in the first half of 2013, WHO and its partners provided enough emergency health kits to serve a population of more than 1.5 million people. By supporting its partners, the Ministry of Health, the Ministry of Higher Education, the Syrian Arab Red Crescent and a network of NGOs, it says it also reached 2.7 million people with vaccinations, as well as consultations and treatment for trauma, primary health care and chronic diseases such as insulin, hypertension, dialysis treatment, and asthma, in both government and opposition-controlled areas in Aleppo, Homs, Idlib, Hassakeh, Latakia and Damascus.

But it remains nowhere near enough.