It took just over six months for Libyan rebels to overthrow the 42-year regime of Muammar Gaddafi, but nearly two years later, addressing the after-effects of the civil conflict remains a work in progress.

The widespread use of anti-personnel and anti-vehicle landmines is one of the legacies of the short conflict. Tens of thousands were laid in several areas of Libya, including Benghazi, Misrata, Zawiya, Sirte, Zliten, Brega and the western mountains, according to Monem Alaiwan, chairman of the Libyan Mine Action Centre (LMAC).

In addition, around 100,000 mines disappeared from Gaddafi’s stockpiles in 2011, according to one Libyan mine expert.

LMAC, a government body responsible for the coordination of humanitarian mine action, says 4,639 “locations” have been cleared in Libya since the conflict.

More than 500,000 explosive remnants of war (ERW), including landmines, projectiles, bombs and guided missiles, have been cleared, according to the UN Mine Action Service (UNMAS), which is now part of the Arms and Ammunition Advisory Section of the UN Support Mission in Libya (UNSMIL).

But hundreds of thousands - from this latest conflict and others before it - remain. The scale of the problem is hard to determine, as no country-wide survey has ever been conducted.

Since March 2011, 108 Libyans have been reported killed and another 161 injured in 135 accidents involving ERW, according to UNMAS. Another 10-12 Libyan volunteers clearing mines and other ERW have also reportedly been killed. The casualty rate is dropping - only two injuries have been recorded so far this year - but accidents are not always reported, so the numbers may be significantly higher.

Unlike in other countries contaminated by ERW, the larger risk to civilians in Libya, experts say, comes from unsecured munitions, which can form the basis for the construction of improvised explosive devices (IEDs), which have recently begun being used in Libya. During the conflict, armed groups seized Libyan government arms and ammunition stockpiles; many more unserviceable munitions were left over from the bombings by NATO forces. Today, there are probably millions of unsecured explosive weapons and ammunition rounds in Libya, and weapons proliferation is a major concern.

“Mine action has been the highest priority since 2011,” says a 2013 UN appeal document summarizing the financial needs of implementing partners in Libya working on weapons management and mine clearance projects. “Arms and ammunition management efforts are receiving increased attention and are essential to ensuring the long-term security of Libya and its neighbours.”

As far back as WW2

In 2011, the Libyan government was one of few worldwide to deploy anti-personnel landmines as part of its battle against a popular uprising.

The Landmine Clearing Team in Zintan, western Libya. Libyan rebels volunteered to clear mines and explosive remnants of war laid during the 2011 conflict that toppled long-time leader Muammar Gaddafi, often working with nothing but metal detectors and the 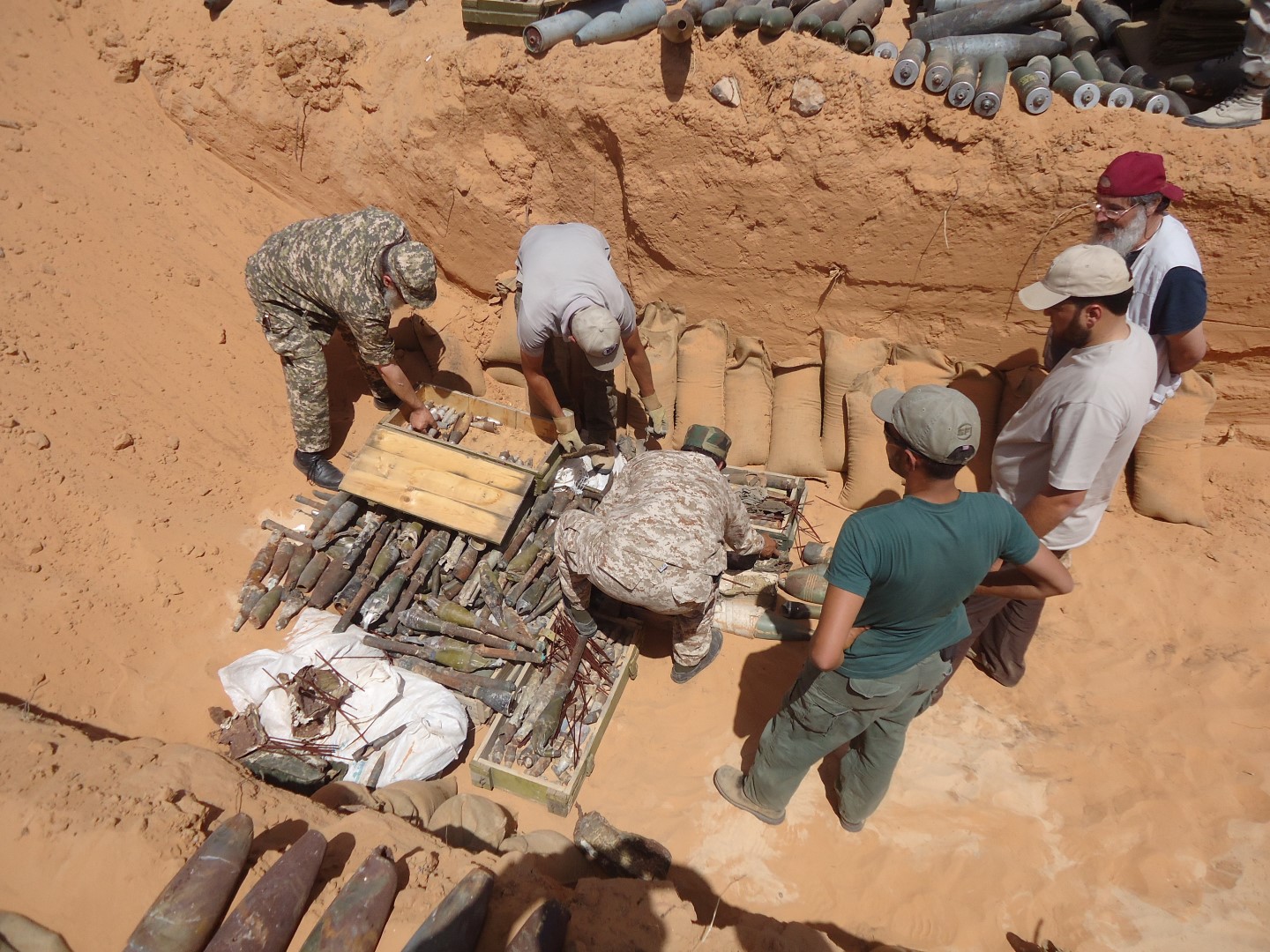 The first reports of pro-Gaddafi forces using mines emerged in late March 2011 in the east of the country, then in the Nafusa mountain range in the northwest, and finally around Tripoli and coastal towns in the west.

According to Human Rights Watch, five types of landmines were used by Gaddafi forces: the Brazilian TAB-1, the Belgian M3 and M3A1, the Chinese Type 72 SP metallic AT, and the Chinese Type 84.

NATO bombing raids on forces loyal to Gaddafi also left ERW, including bombs that failed to go off, grad rockets and cluster munitions from rocket-propelled grenades.

Libyan soil was already contaminated by landmines as a result of the World War II campaign in North Africa, the conflict with Egypt in 1977 and the Libyan-Chadian war from 1980 to 1987, especially areas along the borders with Chad, Egypt and Tunisia.

Reports dating back to the Gaddafi era say 6,749 people were killed and 5,096 injured by landmines between 1940 and 1995, according to the Journal of Mine Action.

Despite mine clearance activity, the Ministry of Foreign Affairs estimated in 2003 that there were still at least 1.5 million landmines buried in the ground.

During the 2011 conflict, the area around Zintan in northwest Libya, a bastion of anti-Gaddafi protest, was particularly affected by landmines, especially the north side of the city.

Walid Omar Tahia, a revolutionary fighter from Zintan, lost a leg in July 2011 when his car ran over a landmine. He now has a prosthetic leg he had fitted in Slovenia where several Libyan fighters have been treated following amputations.

The city’s children have also been victims. Ahmad Abu Kasim Ishtewi, eight, lost his right hand in July 2011 after he approached an anti-personnel landmine on the north side of the city. A year later, Ali Mustafa, 10, was killed in the same area, according to local council spokesman Omar Abdul Assalam Matooq.

Country-wide, the majority of accidents were caused by children or young men playing or tampering with the dangerous items, often out of curiosity. But ERW can also become unstable for other reasons, including changes in weather. To reduce injuries, large-scale school and media campaigns have been carried out to raise awareness of the risk.

From the start, Libyans were acutely aware of the risk that ERW posed, one aid worker told IRIN, but did not have the skills to remove them. Within the first few months of the conflict, rebels started clearing landmines to prevent civilian casualties. The first volunteer rebel group was formed in May 2011 in Zintan, working with just metal detectors and their bare hands.

“Zintan was attacked from the northern side and the area over there was full of people even during the fighting,” Abdel Hakim, head of the volunteer mine clearing team in Zintan, told IRIN. “We were forced to [respond immediately] to the high risk the local people were exposed to.” 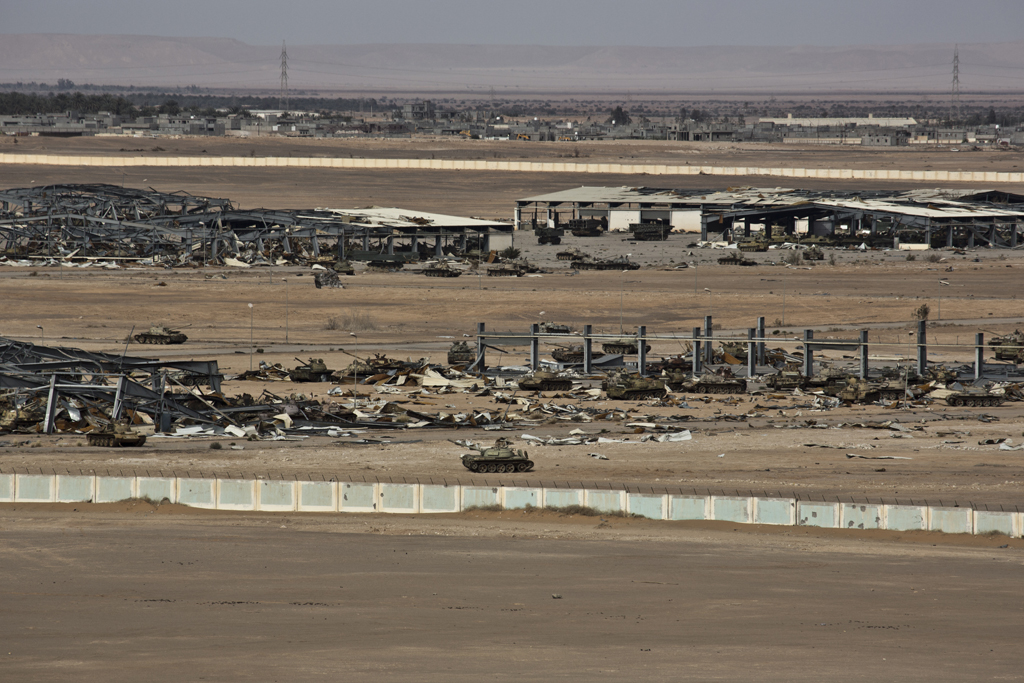 Many of these voluntary groups came together in November 2011 as LMAC. Their volunteer work has continued since, not without criticism, including the alleged use of African refugees.

Work on humanitarian mine action and arms and ammunition management has been hindered by several factors, including tensions between the Ministries of interior, foreign affairs and defence over who should be in charge. Part of the challenge is the evolving institutional governance structure for the sector, involving various government entities. They include LMAC, which falls under the Ministry of Defence; various branches of the Libyan Army; the Libyan Air Defence; and the ministries of interior, foreign affairs and education (on risk education). The Prime Minister’s Decision Making Support Office is trying to develop a national structure for demining and arms and ammunition management in Libya, but the process has been slow.

When the Libyan conflict ended, the US invested “the most extensive effort… in history” to track down some 20,000 shoulder-fired anti-aircraft missile systems, otherwise known as MANPADS, that it believed Gaddafi had stockpiled over the decades, fearing they could end up in the hands of “terrorists”. It also funded NGOs doing clearance work, but as one aid worker complained, the focus was clearly on the MANPADS and not on other threats to civilians posed by left-over weapons.

An international effort by UNMAS and demining NGOs tried to fill the gap. Several NGOs, including the Mines Advisory Group (MAG), Saint Barbara Foundation, Handicap International, DanChurchAid, Danish Demining Group, as well as the International Committee of the Red Cross (ICRC), deployed demining teams in Libya post-revolution, as part of the Joint Mine Action Coordination Team. UNSMIL has a specific mandate from the UN Security Council to help the government address this threat.

LMAC chairman Alaiwan told IRIN he was keen for international NGOs to provide training to locals on international standards of demining. UN experts have been embedded with LMAC; NGOs have trained some Libyan deminers; and the ICRC, in partnership with the Libyan Ministry of Health and the Libyan Red Crescent, have trained about 120 Libyan doctors on how to treat wounds caused by mines, bullets, shrapnel and other weapons.

But the local capacity to clear ERW and deal with their after-effects remains limited. The wide variety of the explosives collected over four decades by Gaddafi’s government and widely used during the 2011 fighting represents a big challenge, even for expert deminers.

Fred Pavey, a deminer working for DanChurchAid, lost a hand in November 2011, while an Estonian mine worker, Kaido Keerdo, was killed in 2012. According to DanChurchAid, both were dealing with a Chinese mine (rocket-dispensed scatterable munitions Type 84) never before encountered by demining teams worldwide.

Though the needs are much larger, the UN and NGO partners have appealed for US$39.3 million dollars (revised in July from an earlier appeal made in December) for a variety of projects throughout 2013 to manage arms and ammunition, continue clearing ERW and educating people about the risks, treat victims of ERW, build local capacity, and conduct - for the first time - a comprehensive survey of the scale of the ERW problem.

"The hazard emanating from uncontrolled ammunition, weapons and ERW in Libya is vast…It requires concerted efforts for decades to come."

They currently face a $19.7 million shortfall.

According to aid workers, donors consider demining a problem the oil-rich Libyan government should be in a position to pay for. But the government argues millions of dollars in assets frozen when Gaddafi was still in power are not yet fully available.

Libya is likely to remain contaminated with ERW for many years to come.

“The hazard emanating from uncontrolled ammunition, weapons and ERW in Libya is vast,” the UN appeals document says. “It requires concerted efforts for decades to come and significant financial support ranging in the hundreds of millions of US dollars.”

During the Gaddafi era, Libya did not sign onto the 1997 “Ottawa Treaty” banning anti-personnel mines, though it did establish in 2005 the National Programme for Demining and Land Reclamation to clear affected areas.

Some Libyan civil society organizations are now calling for the implementation of the treaty, although it is unlikely to be an immediate priority for the transitional government.

If Libya does sign the treaty, it will be required to destroy stockpiled antipersonnel mines within four years and clear all anti-personnel mines from affected areas within a decade.