This article is part of our in-depth coverage. Read more like this...
KABUL

Despite a surge in efforts to eradicate poppy farming, the country’s opium production is at close to record levels, prompting calls for a change in policy - from analysts, as well as farmers impoverished by attacks on their livelihood due to the current poppy policy.

The UN Office on Drugs and Crime’s (UNODC) 2012 Opium Survey found a 154 percent increase in Afghan government poppy eradication efforts in 2012, yet cultivation actually increased - up 18 percent on the previous year.

Afghanistan produces around three-quarters of the world’s heroin, recently retaining its position as the lead producer and cultivator of opium globally, according to the 2013 World Drug Report.

The latest assessment from April shows 12 out of 34 provinces expect an increase in poppy cultivation. Only in western Herat Province is cultivation expected to decrease.

Experts say these trends are worrying as the country is entering a key period in the next 18 months that will see the drawdown of the International Security Assistance Force and presidential elections to replace President Hamid Karzai.

“The potential negative ramifications of the transition on the drugs economy are alarming,” according to a report by the independent Afghanistan Research and Evaluation Unit (AREU) in May.

“Afghanistan cannot afford to be complacent with regards to poppy cultivation. If the Afghan government and international community fail to restructure their priorities now, poppy cultivation will only increase, contributing to the already growing war in the country.”

Yet, year after year, despite repeated calls to restructure priorities, little progress has been made.

The rise of an opium-based economy is not just about exports - the country now has one of the highest levels of addiction in the world, according to UNODC country office regional representative Jean-Luc Lemahieu.

Afghanistan's population of 30 million now has one million users - with more than 700,000, or 70 percent, having no access to drug treatment. Of particular concern is the rising number of female and child addicts.

Not only tribes and villages, but also drug-dependent districts, are sprouting up and having a domino-like effect across the country say Afghan analysts.

Qali a Zal, a predominately Uzbek district in northern Kunduz Province known for carpet weaving is just one example.

Kunduz Province, population 800,000, has more than 30,000 drug addicts according to Kunduz's only drug treatment centre. Half come from Qali a Zal District, where women and children make up 40 percent of addicts.

At birth women rub opium oil on their babies' navels to stop them from crying, so that the women can get on with their work undisturbed.

Due to lack of funding for a treatment centre or any existing health care services in the district, the addiction is passed from one generation to the next.

Most provincial counter-narcotics officials who spoke with IRIN point to funding as the source of the problem.

“Ask the Ministry of Counter Narcotics how much money they give each province to fight poppy eradication. Some provinces like Laghman, Nuristan and others have a budget of 17,000 Afghanis [US$300] a month. Government officials’ salaries are 10 times that,” said an Afghan official who preferred anonymity. “You can't fight a multi-billion dollar industry without money.

“Several years ago in the south, police chiefs had limited manpower [to help cut down the poppy crop] so they were asking the `maliks’ (tribal leaders) to eradicate a portion of the poppy on their land.

“Then they would take pictures and send them back to Kabul as proof of eradication.”

For the country's one million addicts, there are only around 90 drug treatment centres across the country, according to the Ministry of Counter-narcotics.

Most are understaffed, can only hold a small number of patients and are for short-term rehabilitation only, said Afghans.

"Only when you start offering sustainable alternative income sources and livelihood, can you start thinking about reducing illicit cultivation for those farmers that have a real choice between the legal and illegal economy"

This all means drugs merchants have little fear. “You have to have strong connections to be an opium trader,” said one trader from eastern Afghanistan who did not reveal his name for security reasons.

“Some time ago some of my friends were caught with drugs by border police. They contacted [top] officials and were released. Eradication could affect us but right now we have enough land to cultivate poppy even if the government decides to cut some areas down.”

Has eradication made things worse?

For the last decade, counter-narcotics experts say Western-backed initiatives in the country have largely focused on poppy farmers.

A report by researchers David M. Catarious Jr. and Alison Russella from the Center for Naval Analysis (CAN) said initiatives fail to consider the motivations and needs of the poppy farmers who are “the most vulnerable and victimized link in the opium trade”.

Instead of alleviating the pressures that drive farmers to grow poppy in the first place, eradication programmes often exacerbate poverty, and so increase farmers’ dependence on opium.

“The eradication of poppy harms our life. If the government eradicates our poppy, then they should support us and find alternative methods,” said Saeed Kazim, a farmer from Khogyni District in eastern Nangarhar Province.

“If there is no work and no job our lives will be very difficult. Everything I have in my life, I owe to poppy.”

In southern Helmand Province where widespread eradication has taken place, AREU research found that poppy famers and their families dependent on the crop often fall back on negative coping strategies to deal with the loss of income.

In 2011, the study found that households, particularly those in Marjah and Nad Ali districts, reduced both the amount and quality of the food they were eating due to the government’s eradication efforts.

[Afghanistan] Opium harvest in a poppy field in Badakhshan, Afghanistan, 2003. The cultivation of opium has largely increased during the last decade: according to the United Nations Office on Drugs and Crime, in 2004 poppies were grown on 1,300 km², abo 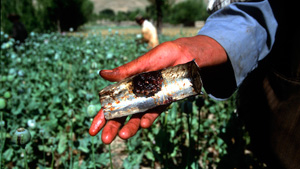 Compared to 2006, poppy production in Helmand has tripled and is expected to be even higher this year.

Jorrit Kamminga, director of policy research at the International Council on Security and Development (ICOS), told IRIN that international counter-narcotics policy in Afghanistan since 2003 had resulted in what he called “sequencing problems”.

“While pushing for forced poppy crop eradication, there was no way for alternative development programmes to keep pace with eradication. In other words, farming communities that were dependent on poppy cultivation had nothing to fall back on. It explains why, in the 10 years that have passed, the problem has not gone away and in many ways has even increased in size and scope.”

There is a window of opportunity for the Afghan government to start a more independent counter-narcotics policy with the end of the security transition in 2014 and reduced Western influence, said Kamminga.

The key component, essential to its success, say analysts, is that in its initial stages the model “de-links” from the programme’s overall drug control objectives.

Only later does it integrate a counter-narcotics focus in the broader policies of territorial control, institution-building, good governance and development.

“In other words, while you leave illicit poppy cultivation intact until the local government has firmly established its presence and basic services, you do not focus on crop eradication. Only when you start offering sustainable alternative income sources and livelihood, can you start thinking about reducing illicit cultivation for those farmers that have a real choice between the legal and illegal economy,” said Kamminga.

Under this putative new policy, farmers’ incomes will decline over time as opium phases out because few crops can compete with opium, but ideally people's standard of living increases.

“If the Afghan government supports farmers they don’t need to grow poppy. If they build long-term projects in our area then the youth can help with that. But when unemployment increases, and a huge number of our youth are jobless and can no longer go to Pakistan and Iran for work because the conditions there are not good, you tell me… what should they do?” said Kazim, the farmer from Nangahar Province.

A standard approach by donors and aid agencies to reduce opium farming has been to create alternative livelihood programmes, schemes criticized by the World Bank back in 2008.

“The shift to an `alternative livelihoods' concept was meant to encompass broader factors, including access to assets like land, water, and credit, as well as markets. But this conceptual improvement has not been translated into practice, as alternative livelihood programmes have continued to focus on discrete projects mainly involving other crops.”

“In my whole district there is no water,” said farmer Gul Khan from Charchino District of Uruzgan Province. “Farmers face difficulties from years of drought, and it is difficult to see any reconstruction from all the money distributed between government authorities; for these reasons we need to grow poppy.”

Successful projects in Afghanistan are few. Small-scale projects with international support such as replacing poppies with organic roses have often depended on continuing outside support and lacked sustainability.

Projects that have shown some degree of success, said Kamminga, share several commonalities: the possibility to cultivate crops with a high international market value, to effectively organize farmers into associations and cooperatives to increase their bargaining power vis-à-vis buyers, and a unique trait that added an increased value such as organic certification.

In Afghanistan pomegranates, almonds, saffron and some fruit production have shown market potential.

To dissuade the 1.6 million Afghans directly involved in poppy cultivation, said Kamminga, the number of beneficiary projects would need to be significantly more than the several hundred that exist today.