A newly sanctioned African Union (AU) force for quick deployment in conflicts such as in Mali is being promoted as a stop-gap measure ahead of the planned formation of the “rapid deployment capability” (RDC) African Standby Force (ASF).

Unlike the ASF, which will also have policing and civilian duties, the African Immediate Crisis Response Capacity (AICRC) force will have “a strictly military capacity with high reactivity to respond swiftly to emergency situations upon political decisions to intervene in conflict situations within the continent,” Nkosazana Dlamini-Zuma, chairperson of the AU Commission, said in her recent report to the AU summit in Addis Ababa.

While the AU’s failure to resolve crises in countries like Côte d’Ivoire, Libya and Mali has been a source of embarrassment to the continent-wide body, the AU Mission to Somalia (AMISOM) is widely regarded as a success, with the annual US$500 million running costs bankrolled by international partners.

AMISOM provides “pride” for the AU, according to analysts, as African forces at the cost of significant lives (some estimates say thousands), were able to achieve what a far better equipped US force failed to do in Somalia - bring about an opportunity for peace.

Dlamini-Zuma said in her report Mali was a spur for the AICRC’s formation and it was “obvious” an African military force with an RDC would have meant the French military intervention would not have been “the only recourse”.

Solomon Dersso, a senior researcher at the Addis Ababa office of the Institute for Security Studies (ISS), a Pretoria-based think tank, told IRIN Mali interim president Dioncounda Traoré’s reaching out to former colonial power France for military assistance to counter the Islamist rebels “left a bad taste in the mouths of many people here [Addis Ababa and AU headquarters] and led to discussions at the highest level of the AU.”

According to Dlamini-Zuma, the AICRC will be drawn from a “reservoir of 5,000 troops, with operational modules in the form of tactical battle groups of 1,500 personnel that can be deployed rapidly… which must have a minimum initial self-sustainment period of 30 days”.

The report said the AICRC would have three tactical battle groups, comprised of three infantry battalions of 850 troops each, an artillery support group and light armour elements, as well as an air wing of 400 troops, which would include strike aircraft and helicopters and logistical support, including strategic airlift capabilities. The unit would have a “10-day notice of movement”.

The force headquarters will have a nucleus of 50 staff and AICRC duties would range from “stabilization, peace enforcement and intervention missions; neutralization of terrorist groups, other cross-border criminal entities, armed rebellions; and emergency assistance to Member States within the framework of the principle of non-indifference for protection of civilians,” Dlamini-Zuma’s report said.

Lamamra Ramtane, AU commissioner for peace and security, said in a statement that troop contributions to the AICRC would be on a voluntary basis by member states and those countries participating would finance the AICRC so it could “act independently”.

A Ugandan soldier serving with the African Union Mission in Somalia (AMISOM) holds a rocket-propelled grenade at sunrise, on the frontline in Maslah Town, on the northern city limit of Mogadishu 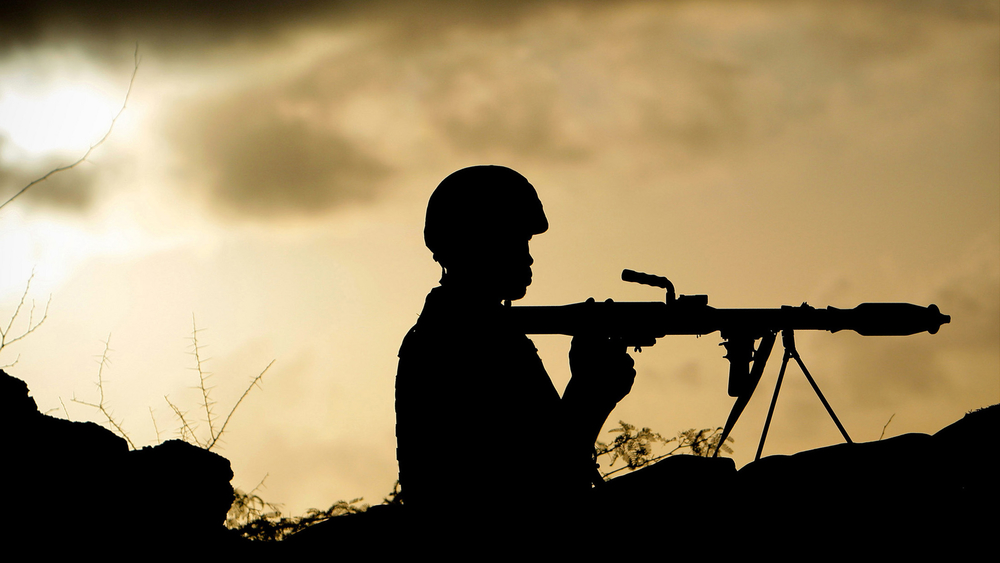 On the face of it, the AICRC looks like a prototype of the ASF, except there appear to be slight differences in the way the two forces can be deployed. Lamamra said: “Command and control [of the AICRC] will be ensured by the AU Peace and Security Council upon request of a Member State for intervention.”

The ASF mandate under the Constitutive Act of the AU adopted in 2000, is a complete break from its predecessor, the Organisation of African Unity, which adopted a philosophy of non-interference in member states. The Act gave the AU both the right to intervene in a crisis, and an obligation to do so “in respect of grave circumstances, namely: war crimes, genocide and crimes against humanity”.

Clayson Monyela, spokesperson for the South Africa foreign affairs department, told IRIN the AU remained committed to the ASF, and although any AICRC deployment was conditional on a government’s invitation, “there may be exceptional circumstances” where the force could intervene in the absence of such a request.

The advantage of ad hoc forces, Sivuyile Bam, the AU Commission head of the Peace and Support Operations Division, told IRIN last year, was that it used the lead nation concept and was more direct, rather than dealing in the political intricacies of the ASF. “A country can go to the AU [with the ad hoc system] and say I have got a battalion. I will deploy it tomorrow.”

Bam envisaged a “combined system for the next 5-10 years. The ASF system is maturing and taking time to develop and still relying on the lead nation [ad hoc] concept. So when there is a need for an operation - send out a note to the (AU) member states saying `I need soldiers, please help me out’.”

"Once it [the AICRC] gets a life it may take a different course altogether, depending on its success"

The AICRC is framed as a “temporary arrangement”, the ISS’s Dersso said, but “once it gets a life it may take a different course altogether, depending on its success,” and may evolve from an ad hoc force into a “fully fledged unit” at the disposal of the AU.

Some analysts have argued that a functioning, efficient and well equipped ASF may still lack the capacity to simultaneously operate in places like South Sudan, the Sahel and the Democratic Republic of Congo (DRC).

If and when the ASF eventually materializes, troop contributions to the five stand-by brigades will be based on Africa’s five regional economic blocs with each supplying about 5,000 troops, 720 police officers and 60 civilian members (e.g. human rights advisers, political affairs and public information officers) - and each regional bloc’s brigade will be placed on a six month rotational standby every two years to be available for rapid deployments.

The ASF will fulfil a range of functions, for example, supplying troops for attachment to a regional military, political or UN mission; or it may deploy a regional peacekeeping force within a 30-day timeframe, or 14 days in “grave circumstances”, such as genocide.

An urgent need for quick reaction forces was highlighted in a recent ISS report that said “the risk of instability and violence [in Africa] is likely to persist and even increase in some instances.”

Drivers of conflict cited by the report included: the fact that “many states were trapped somewhere in between autocracy and democracy;” the “bad-neighbourhood” syndrome resulting in the effects of conflict spilling across borders; and post-conflict states lapsing back into “repeat violence”.

The imminent deployment of a 3,000-strong “robust, highly mobile” intervention force - comprising troops from Malawi, South Africa and Tanzania - under the masthead of SADCBrig (Southern African Development Community Brigade) to “neutralize” armed groups in the eastern DRC under UN Resolution 2098 has a stronger resemblance to the AICRC’s mandate rather than to the ASF’s, as it will comprise a combat force without any civilian or policing appendages.

However, deployment of the intervention force in DRC is being delayed by a combination of factors, including an increasing scarcity of available heavy air lift aircraft, and a paucity of landing strips capable of handling them, Helmoed-Romer Heitman, a senior correspondent for Jane’s Defence Weekly, told IRIN.

"How do you deploy quickly if you don’t have heavy airlift?"

“How do you deploy quickly if you don’t have heavy airlift?” he asked. African militaries were chartering aircraft “as usual”, but relied on former Soviet logistical aircraft, such as Antonovs, which were becoming obsolete, he said.

South Africa ordered eight Airbus military A400m transport aircraft in 2005 at a cost of about US$1 billion, but later cancelled the order citing financial constraints and associated cost increases, and was reimbursed the $407 million down-payment in December 2011 by the European aircraft manufacturer. The transport aircraft were expected to enter service in 2013.

Heitman also questioned how the AU defined the concept of “quick reaction”, alluding to recent events in Bangui, the capital of the Central Africa Republic (CAR), that saw the botched deployment of South African troops in support of CAR President Francois Bozizé. Thirteen South African troops were killed and two others died from wounds on their return.

“A lot can happen in 48 hours. Putting a paratroop battalion on the ground in 24 hours is a quick reaction,” he said.