At Gashandiga barracks in Mogadishu, Somalia, Pvt Mohamed Sheikh Issak pulled back his military fatigues to show his scarred right shoulder. “I was shot by Al-Shabab when they still controlled half of Mogadishu,” he told IRIN. “I was at home, but they knew I was a soldier.”

Issak joined the army over two years ago; he proudly recalled his role in the battles for Afgoye and Jowhar. With him were new recruits - young, inexperienced and ill-equipped, but determined to fight Al-Shabab; the militant group was ousted from the capital in 2011, but still controls large swaths of the country.

“I want to defend my country,” 20-year-old Efrah Ibrahim told IRIN. She joined the army as a frontline paramedic after hearing a recruitment appeal on the radio. “Mogadishu was like another country before. It was very dangerous.”

At the Somalia Conference held in London last week, British Prime Minister David Cameron pledged over US$50 million to help rebuild Somalia’s armed forces, police and judiciary. Other nations also committed funding, including nearly $60 million from the European Union. The hope is that young recruits like Issak and Ibrahim will soon take the lead in maintaining peace in Mogadishu, and one day throughout all of Somalia.

Many recent security gains in south-central Somalia have been the result of gruelling efforts by a 17,700-strong African Union force (AMISOM) supported by their Somali counterparts. More recently, Kenyan and Ethiopian forces have pushed back Al-Shabab in southern and western Somalia, respectively.

But Somalia’s government has stressed that it wants to take control of the country’s security. An ambitious National Security and Stabilization Plan (NSSP), adopted last August, outlines plans to rebuild Somalia’s armed forces and national security programme, reform the police and judiciary, and roll out a modern coastguard. Leaders hope to build a professional army of 28,000 within three years, at a cost of some $160 million, while also doubling police numbers to 12,000.

“It is very important to rebuild the Somali forces and defeat the terrorist organizations and pirates that are threatening the security in our country,” Brig-Gen Mohamed Abdi Mammow, Somali National Army liaison officer, told IRIN.

Additionally, the Somali security forces, alongside their AMISOM counterparts, are fighting a violent insurgency. Recent attacks on the capital - including a suicide car bomb that left 11 dead just two days before the London conference - have underscored the significant demands on the security sector.

“There is a real tension trying to train these forces when they are at war,” said Col Anthony Howie, senior military advisor to the UN Political Office for Somalia. “No one has the luxury of pulling them out; they are essential in the fight against Al-Shabab.”

From militias to military

Somalia’s armed forces comprise some 20,000 soldiers, defined as those fighting Al-Shabab, including militias not formally integrated into the military. But only around 13,000 soldiers receive regular financial payments, most of which are paid by the international community. Pay is critical - soldiers who get paid receive a $100 monthly stipend - and resentment over salaries threatens loyalties to a national command structure.

“Outside Mogadishu, in the near-term, the government has little choice but to negotiate command and control arrangements with local forces, providing them with logistical support, financial support and legitimacy in exchange for a degree of loyalty. Paying salaries will ultimately be much more important in building a professional force than obtaining new weapons and equipment,” said Bryden.

Al-Shabab deserters and defectors are also being integrated into the security forces, but the process is not straightforward. The threat of infiltration by Al-Shabab underscores the need for improved counter-intelligence by the Somali government. Meanwhile, some pro-government militias are resisting joining the national command, and concerns remain about the loyalties of fighters in clan-based units.

“Loyalty challenges are surmountable with better training - not only physical, but rigorous training on nationalism, human rights and rule of law,” said Abdi Aynte, director of Somalia’s first think tank, the Heritage Institute for Policy Studies.

The Somali military now follows an annual training programme. The Uganda-based EU Training Mission has trained over 3,000 soldiers, with much of the training expected to move to Somali soil this year. AMISOM has also supplied a training team, while Turkey is expected to play a significant role in both military and police training.

But training alone is not enough. “They are also woefully underequipped and under-resourced to fight a violent insurgency,” said Col Howie.

This was evident at the Gashandiga barracks. Despite enthusiastic weapons drills by the young soldiers, Col Kassim Ahmed Roble revealed the base has just 100 AK-47s for 600 soldiers.

A senior officer inspects weapons dismantled by soldiers of the Somali National Army as part of a weapons drill at the Gashandiga barracks in Mogadishu, Somalia. The Ministry of Defence returned to the rehabilitated Gashandiga complex earlier this year, h 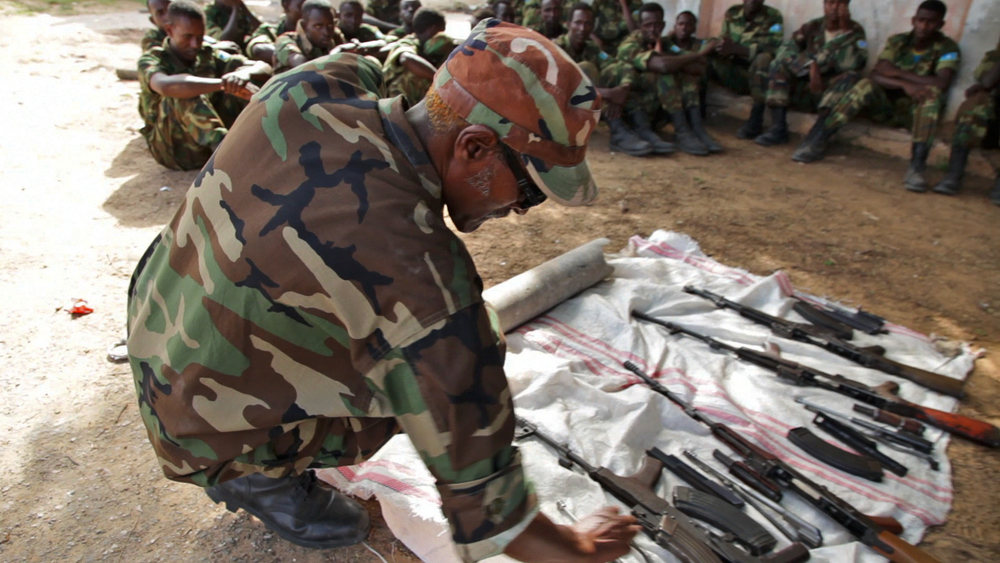 “The army needs some more time,” he told IRIN. “We need more weapons as well as financial support from the international community.”

The UN Security Council relaxed a two-decade arms embargo against the country in March, permitting the Somali government to buy light weapons for its forces. But Defence Minister Abdihakim Fiqi said last week in London that not “a single bullet” or gun had been received since the lifting of the embargo due to a “lack of resources”.

From the streets to the courts

Somali’s police force was also incapacitated by the conflict. Funding pledges in London included money earmarked to help double police numbers and to rebuild Mogadishu’s central prison. But the police face challenges similar to those confronting the military: recruits cite low pay and significant risk to themselves and their families.

“We cannot increase police numbers without knowing exactly what budget we have to pay them,” Gen Mohamed Hassan Ismael, Somali Police Force liaison officer, told IRIN. “We also need professional judges. As police, we are in the hands of the judiciary. There are high levels of corruption in the judiciary - sometimes criminals pay their way out. There needs to be scrutiny from top to bottom.”

The majority of Somaila’s 6,000 police officers are based in Mogadishu. Some served pre-1991 and were vetted before being allowed to rejoin the force; around 3,500 have been recruited since 2005. Their stipends are paid by the international community, on the condition that officers have completed basic training.

“After 20 years of war, people don't always understand policing,” Cpl Ahmadu Sule Singer, a Nigerian police trainer with AMISOM, told IRIN. “Some people here have grown up using a weapon, but I teach them basic police work with civilians. I find it so difficult to control them at the beginning of the course.”

On a joint night patrol, Somali police officers man a checkpoint in Hodan District, searching cars as their Nigerian counterparts secure the area. “I correct them if they do something that isn’t good - I tell them to talk gently rather than cock their rifle,” added Singer.

Local residents selling khat and cigarettes at a busy junction are relaxed about the police’s presence. “I don’t mind the police. They are doing a good job,” taxi driver Abdirahman Aden Hussein said as his car was being searched. “Before, you couldn’t stand out here at night.”

“The Somali security forces and their allied militias have committed serious abuses. I have spoken to displaced women raped by the security forces and individuals fleeing fighting who have had all their possessions looted along the way by government militia,” Laetitia Bader, a Human Rights Watch researcher, told IRIN.

Earlier this year, a woman who alleged she had been raped by security forces and a journalist who interviewed her were arrested and charged with insulting national institutions, prompting international outrage. Although the verdicts were eventually overturned, the Somali government faced difficult questions about its commitment to cracking down on rape committed by security forces. President Hassan Sheikh Mohamud has since acknowledged that some security forces have committed rape and said that they must be “defeated just like Shabab”.

The president also stressed that crimes by members of the army would not be tolerated. Mobile military courts, which follow troops to the frontline, are used to try suspected offenders. According to Col Howie, these are some of the most active courts in Somalia: “They have wide-ranging powers to administer discipline, and they take that very seriously.”

While the military and police are trained in human rights and civilian protection, Human Rights Watch stresses that proper vetting is also critical. “There has to be a concerted effort to sideline abusers - both from within existing forces and during any integration process of militias,” said Bader.

Somalia’s security forces have a long road to travel before they can take charge of the country’s security, but with the commitment to change and the significant funding pledged, they may be marching in the right direction.