UN officials are lauding as a “big achievement” today’s announcement that Kuwait has officially allocated $300 million promised for humanitarian aid in Syria.

Only once before has a Gulf country contributed such a large amount of money through multilateral channels - when Saudi Arabia made a $500 million contribution to the World Food Programme (WFP) in 2008, the single largest cash donation ever made to a UN agency.

Kuwait’s announcement is a follow-through of the pledge it made at a major international conference on 30 January, in Kuwait, which saw more than US $1.5 billion in aid promised; it was one of the largest and most successful fundraising events in UN history (See the full list of pledges here). Yet hundreds of millions of dollars pledged at the conference by other donors have yet to materialize, and aid agencies in Syria are threatening to cut programming because of funding shortages.

Kuwait has already begun handing over $275 million in cheques to UN agencies, with another $25 million going to the International Committee of the Red Cross (ICRC).

“We are … matching our words with our deeds,” Dharar Abdul-Razzak Razzooqi, Kuwaiti ambassador to the United Nations in Geneva, told journalists at a press conference today.

With Kuwait’s allocations, about half of the $1.5 billion has been committed or contributed, meaning the donor has provided details of the amount each recipient agency will receive or has actually transferred the money.

“Without the Kuwait timely contribution now, we would all be in extreme difficulties, immediately,” Antonio Guterres, UN High Commissioner for Refugees, said at the press conference. “This gives us the breathing space to allow [us] to wait for other countries to commit themselves as Kuwait did and to make their pledges transformed into reality.”

In December 2012, the UN appealed for $1.5 billion to help people both inside and outside Syria in the first six months of 2013, through two UN-coordinated response plans. As of 18 April, aid agencies had received approximately $810 million towards those appeals - or about 52 percent of the requested funding.

While the January conference was meant to meet those financial needs, not all the $1.5 billion pledged at the event will go towards the $1.5 billion needed for the response plans, with some donors choosing to fund project through other channels.

FTS has so far tracked $336 million committed for humanitarian aid towards the Syrian crisis in 2013 outside of the two appeals.

Revised UN-coordinated plans, including the financial costs of aid programs for the second half of the year, will be presented at the end of May. Guterres said the number of refugees by year end could easily be triple the number accounted for in the current plans.

The bulk of the money pledged at the conference came from Kuwait, the United Arab Emirates and Saudi Arabia.

Several sources told IRIN the Emirati government is unlikely to channel much or any of its promised funding through the UN, instead spending the money through Emirati channels, including the UAE Red Crescent Authority, the Khalifa bin Zayed Al Nahyan Foundation and the Abu Dhabi Fund for Development.

"This is not a crisis like any other. The dimension, the intensity, the level of suffering, the level of destruction are such that this cannot be funded with usual humanitarian aid budgets."

The UAE Red Crescent Authority is running a new camp for Syrian refugees, which opened in Jordan last week and was described by the UN Refugee Agency (UNHCR) as “five-star”. Ahmad Al Mazrouie, chairman of the Authority, told a local newspaper that the camp was “strong proof” of the commitment made at the January conference, with the Authority having spent more than 50 million Emirati dirham ($13.6 million) so far.

Sulaiman Al-Turki, of the Saudi Ministry of Finance’s department of international financial affairs, told IRIN that Saudi Arabia’s contribution has already been allocated to UN agencies and the Saudi Relief Committees and Campaigns, a local NGO active in the countries hosting Syrian refugees. The National Campaign for Syria has already received some of the funding, Al-Turki said, disbursed on an “as-needed basis, according to the National Campaign assessment.”

A group of Gulf NGOs, which pledged an additional $183 million at the conference, has yet to raise the full amount promised, according to Suleiman Shamsaldeen, general manager of the International Islamic Charitable Organization, one of the organizations in the coalition. The commitment made in January, he told IRIN, was to raise and spend that amount by the end of 2013.

“They are trying to finalize the formulation…“The way it works is that these societies and NGOs commit themselves, but it doesn’t mean… they [already] have money in their pockets,” he said.

However, Gulf NGOs have already started implementing projects, said Othman al-Haggi, head of relief at the Kuwait Relief Society, which is coordinating the efforts. A complete action plan - aimed in part at supporting fundraising efforts, focused around the Muslim holy month of Ramadan - will be published by the end of the month, he said.

Separate from the conference, Qatar announced it would give $100 million to the opposition Syrian National Coalition’s humanitarian aid arm, the Assistance Coordination Unit.

After the Gulf donors, the next largest pledges at the Kuwait conference came from the US, the European Commission’s humanitarian arm ECHO and the UK, each of which have fully allocated their funds. (The UK’s full commitment, finalized today, has yet to be reflected on FTS)

Australia, Belgium, Bulgaria, Canada, China, Finland, Germany, Hungary, Ireland, Japan, Malta, Mongolia, the Netherlands, Poland and Slovakia have also completely paid off their pledges, though many countries had planned their funding in advance in order to announce it at the summit.

There are also other sources of funding for UN agencies and NGOs working on the Syria crisis, including the UN-managed Central Emergency Response Fund, which just approved $20.5 million for use by UN agencies.

The separate Emergency Response Fund (ERF) for Syria, established last June, has received $36 million in funding, of which $10 million remains available for use, awaiting project proposals from NGOs. (The ERF only funds small short-term projects to a maximum of $500,000, which must meet certain criteria. Many local NGOs do not have the awareness or the skills to submit proper proposals).

Massive bureaucratic machinery is involved in the funding of humanitarian responses to crises. Contracts have to be negotiated, signed and counter-signed, often both in the field and at the headquarters level. Depending on the amount of money involved and the sophistication, funding cycles and bureaucracy of the donor, it can take days - or months - from the moment funding is authorized to when the money is transferred to a bank account.

Aid agencies rarely have any guarantee that promised funding will come through on any given day. Many donors, like ECHO, have separate mechanisms in place to fund emergencies, meant to speed up the process.

However, pledging conferences, like the one in January, are almost never fulfilled completely, according to donor transparency groups.

For example, according to an analysis done by the Office of the Special Envoy for Haiti, of $9 billion pledged for Haiti at a conference in March 2010, after the 7.0-magnitude (Mw) earthquake struck the island nation, $3.9 billion had been recovered by the end of 2010. By 2012, $6.4 billion had been received. (However, many pledges were multi-year commitments) 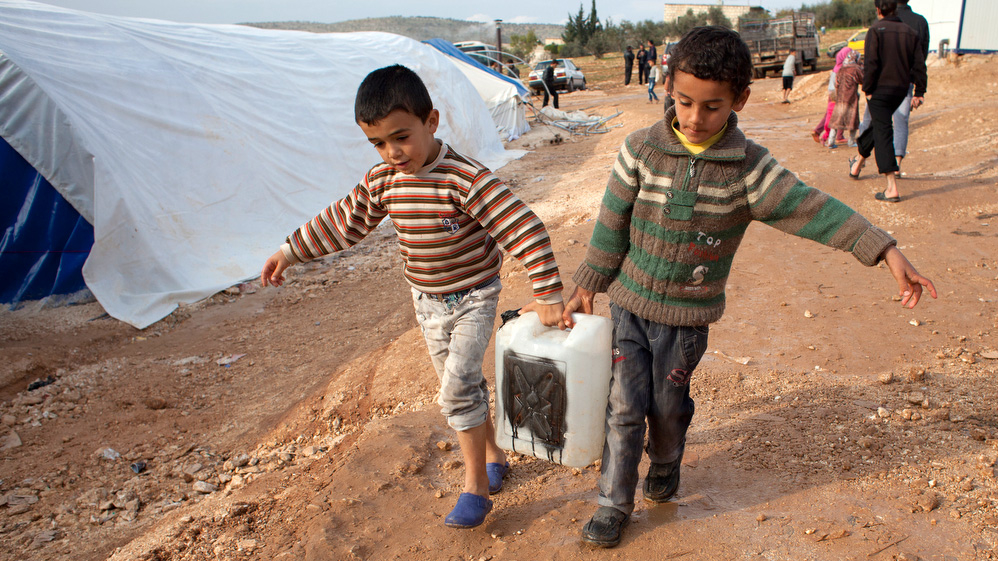 While awaiting funds at the initial stages of the Syria emergency, many large operational UN agencies tapped into financial reserves from their headquarters, “at times taking some risks,” Regional Humanitarian Coordinator for Syria Radhouane Nouicer told IRIN. Even with these funds, UN agencies are now overstretched. “This practice has limitations and cannot accommodate all urgent needs,” Nouicer said.

“If fresh funding does not come urgently,” he added, “the response will be seriously disturbed.”

Inside Syria, at least four million people are displaced; millions more have lost their jobs and are struggling with increasing food prices and unavailable healthcare.

UNHCR has registered more than 1.4 million Syrian refugees in neighbouring countries, and the unofficial number of refugees is thought to be much higher. In addition to their growing needs, refugees are also placing a massive burden on their host communities in Lebanon, Jordan, Turkey, Iraq and Egypt, with the potential to undermine stability in the entire region.

During the press conference, Guterres lobbied for a special fund through which governments could more sustainably support Syrian refugees and their host countries. “This is not a crisis like any other. The dimension, the intensity, the level of suffering, the level of destruction are such that this cannot be funded with usual humanitarian aid budgets,” he said.

Funding is not the only constraint for the aid operation in Syria. Insecurity, a lack of information, and layers of required clearances from both the government and UN have also limited aid delivery. But inadequate funding has played a significant role.

“We are precariously close, perhaps within weeks, to suspending some humanitarian support,” the heads of five UN agencies responding to the crisis said in an editorial in the New York Times this week.

The UN Children’s Fund (UNICEF) has already announced that without additional funding “in the coming days and weeks”, it will have to cut certain aid programmes inside Syria, including vaccination efforts, mobile health teams, water provision and recreational activities for children. In neighbouring countries, UNICEF will no longer be able to provide water for drinking, showering or latrines for tens of thousands of refugees, and will have to cut off education for tens of thousands of Syrian children studying in Jordanian and Lebanese schools.

UNHCR is struggling to afford simple things like lighting and blankets in some of the refugee camps, let alone sufficient security measures in the increasingly insecure Za’atari camp in northern Jordan. Without new funding, UNHCR said it will have to reduce the healthcare coverage it provides to current refugees. It will also become “simply impossible” for UN agencies to provide food, clean water, schooling, shelter and healthcare for new refugees who keep streaming in, it said.

“We heard [about] the huge generosity announced in Kuwait. We’d like to see it materialized now,” Panos Moumtzis, UNHCR’s regional coordinator for Syrian refugees, told IRIN. “The needs are more than what we are able to respond [to]. We don’t know how much longer we will be able to continue, unless a miracle happens with significant contributions.”

Julie Thompson, who tracks donor commitments for FTS, also urged donors and recipients to inform FTS of money flows, “so we can help identify the gaps and direct resources where they are most needed”.

*This article was amended on 19 April to correct Kuwait's allocation to UN agencies from $285 to $275 million.