Hamidullah, the headmaster of Haji Mir Alam girls’ school in Afghanistan’s northern Kunduz Province, was sitting at his desk in the summer of 2011 when members of a local militia entered the school.

The armed men escorted Hamidullah outside the school gate where their commander, Qadirak, was waiting. Then they beat him unconscious with their rifles.

“I still don't know the reason they beat me. If people beat me, it's like beating all the villagers. To show their power, they beat the father of education.”

Such abuses are a regular part of life, especially in the north and northeast, particularly in the provinces of Kunduz, Baghlan, Faryab and Balkh, where militias are commonplace.

These groups complicate the delivery of aid and create insecurity for ordinary people, who are frequently confused by the assortment of armed ethnic gangs, village protection forces and semi-official militia, according to half a dozen aid organizations in Kunduz interviewed by IRIN.

“There are irresponsible groups in the area. When they come to an area, they cause problems and hinder some work,” said Hayatullah Amiri, director of the Human Rights Commission, which works in Kunduz.

These groups include village militias known as ‘arbaki’, which typically lack uniforms and training, and the Afghan Local Police (ALP), locally based militia groups that have received some training from US Special Forces and which are officially under the control of the Ministry of Interior.

The war in Afghanistan is often seen as a fight between Taliban insurgent groups and government and international forces, but in reality, local armed groups frequently operate between and among these sides in a kind of grey area. Militias, often tied to local strongmen, provide security against Taliban insurgents in areas without a government presence, and many have, at different times, been in partnership with government and international forces. Individual members have often switched sides and allegiance between the different groups involved in the conflict.

After the fall of the Taliban in 2001, international troops began hiring some of the militias - which had helped drive out the Taliban - as temporary security forces.

The government initiated a disarmament, demobilization and rehabilitation (DDR) programme in early 2003,
to disband militia groups and help members reintegrate into society, but progress was slow, according to the International Crisis Group (ICG).

As the security situation deteriorated, the international forces began to sponsor many of these militias to extend their reach. Such semi-unofficial forces played an important role in providing security for the 2009 elections.

Things took a more formal turn in 2010 when the ALP was officially recognized as the primary local defence force to help keep remote communities free from Taliban insurgents.

The UN Mission in Afghanistan's (UNAMA) 2012 report highlighted an increasing number of abuses blamed on the various independent militia groups.

For ordinary people, the official Afghan National Police force is just one of a large number of armed groups 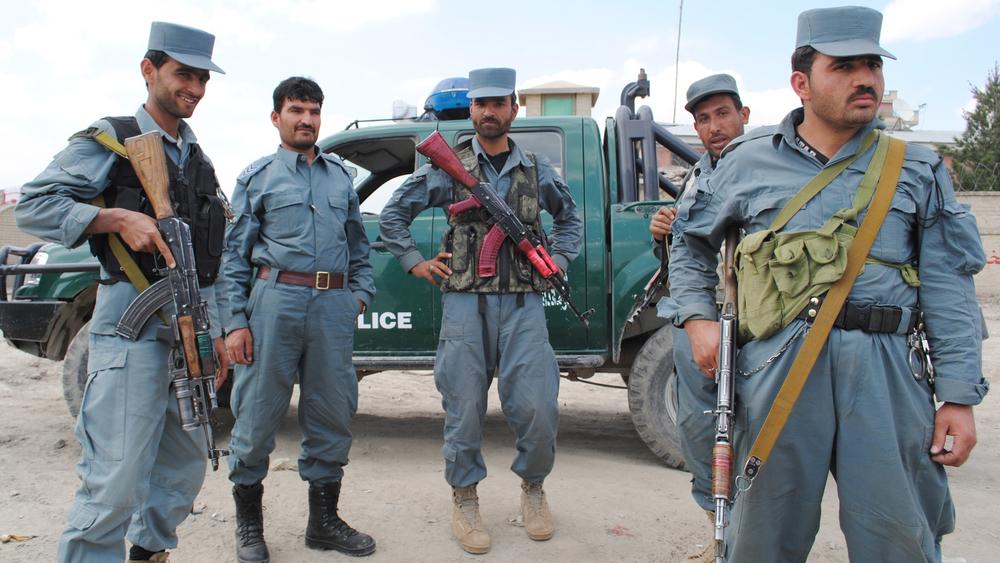 “I have to keep all sides happy, including the Taliban. This is the only way for me and many other locals. A commander often comes and says, ‘Please cook for 30 of our guests’, or, ‘We have fighters who need to be fed.’”

Though some communities and aid workers told IRIN that they have seen security gains in areas with an ALP presence, Human Rights Watch has reported rights abuses by ALP forces.

Some militia groups were previously hired by international forces but have since been disbanded - though not disarmed. These groups operate at a more informal level, but many hope to be incorporated into the ALP.

“My 224 men at 21 posts around Qaliazal District haven't been paid for the last six months. I want the government to either disarm my men and take charge of security, or start giving us money,” Nibikichi, the commander of the officially disbanded CIP Qaliazal militia, told IRIN.

His group had previously been hired and paid by US Special Forces.

“If we hand over weapons now, the Taliban will come and kill us all, and the area will be insecure again very quickly. For now, locals here pay for food to feed my men. You can ask them. We don't force anyone to feed us.”

People told IRIN they felt they had no choice but to obey for fear of reprisals.

The presence of such armed groups increases uncertainty for aid workers, as well.

“In areas where there are Afghan Local Police and national police, work is getting done. Of course NGOs have to take security into consideration, and when they do projects they have to contact these officials. But where other [armed] groups operate and exist, there are problems,” said Amiri of the Human Right Commission.

But “many Afghan civilians as well as aid actors had difficulty distinguishing between militia, criminal groups, Taliban and ostensibly government-controlled security forces,” said Ashley Jackson and Antonio Giustozzi, authors of a recent working paper on aid work in the country.

“While some aid workers felt that arbaki enhanced their security, others complained that militias or local strongmen attempted to interfere with their programming,” Jackson and Giustozzi wrote.

Still, most NGOs in Kunduz told IRIN that humanitarian work was still possible in areas with a strong militia presence.

“We have been here for 30 years, so we know what works,” said Zabihullah Aziz, director of the Swedish Committee for Afghanistan. “We hire people from the area where the project is being implemented, so they know the sensitivities of the community, but we also provide further training.

"The impunity is growing; the cycle of violence is perpetuating"

Razmal Sardar, who worked on a UN World Food Programme (WFP) project, says using local staff is key: “We are locals from Kunduz, so people know us and our families. Because of this we can work in areas with militia. They often looked after our security.”

Echoing Aziz, Sardar says community support is essential. “If they agreed on the project, then we would start. If the people did not want the project or weren't sure, we did not go ahead. If locals agree and are involved in development then militia won't bother with you.”

But Zalmai Alokzai, manager of a new project, Stability In Key Areas, which helps programmes identify sources of instability before implementing projects, anticipates challenges ahead: “Because of the nature of our work, I am sure we will face problems.”

District officials are outnumbered and lack power to arrest or detain militia when they commit abuses, and officials say they are beyond government control.

“The impunity is growing; the cycle of violence is perpetuating,” said a UN human rights official who spoke on the condition of anonymity.

Thomas Ruttig of Afghanistan Analysts Network says the most basic problem with these militias is the economy: “There is not enough money to employ these people. There is a surplus in the gun business, so the gun industry is more lucrative than, say, agriculture.

“If growing sugar beets were more profitable, then the militia would grow sugar beets. The whole intervention post-2001 has still not changed this. We need to look at the intervention and question its effectiveness.”