Papua New Guinea (PNG) is a Pacific country rich in natural resources, yet its health staffing levels are comparable to the world’s poorest countries due to a rapidly retiring force and lack of qualified replacements.

“If we do not do anything about our ageing workforce quickly, the health system may collapse,” former health minister Jamie Maxton Graham told parliament in 2012.

Despite repeated warnings of the shortage, first at a 2002 national health conference, again in 2008 during a government health resources forum, and most recently by a 2011 World Bank report, the country still faces what the government calls a “drastic” health worker shortage. The World Bank report predicted a large decline in the “backbone of rural service delivery” (nurses and midwives) - by up to half.

All this is unfolding in a mostly rural half-island of seven million residents where the closest health clinic might be hours by boat, foot, or at best, local transport, from the village, said Miriam Lovai, former head of the national midwife association.

Rural health care is especially threatened, noted 2011 field research led by Care Australia and the Australian National University. Twice as many infants and three times as many children under five die in rural areas than urban ones, according to the country’s latest census in 2000.

Two years since the Bank’s “call to action” report, PNG’s health workforce (mostly nurses and midwives) is dwindling through retirement or attrition while the country continues fighting high malnutrition rates in remote highland communities, as well as high infant and child mortality (57 and 75 per 1,000 live births, respectively).

Health experts say the shortage of qualified nurses is due to falling government support to nursing schools, starting in 1999, which has forced the closure of all but three of the eight public nursing schools.

The team leader of the World Bank report, Aparnaa Somanathan, told international media in 2011: “I think training capacity in PNG has weakened considerably over the last 10-15 years. There is less and less resources being put into training, so PNG’s ability to train more and more doctors and nurses has declined.”

Churches or faith-based groups operate the posts, which are staffed with a nurse or CHW. In areas largely bereft of government services, these posts provide frontline primary care and become the de facto village doctors.

“Many of our qualified nurses have taken up employment in the resource [oil, gas and mining sector] for better pay and conditions,” said Manga Bengi, a public relations officer with Mount Hagen Provincial Hospital, the country’s third largest hospital in Western Highlands Province.

Meanwhile, with poorly-funded health training opportunities, almost no midwives have registered with the state since 2000. However, since the Australian government gave US$120 million last year for midwifery training, Port Moresby reopened four midwifery schools in 2012; a new group of midwives is due to graduate this month.

Even so, these graduates will be far outnumbered by the number of health workers expected to retire soon. Out of 570 doctors, 3,429 nurses and 4,400 community health workers, 20 percent have passed the legal retirement age of 55, while nearly 40 percent are 45-55, according to the government in 2012.

Nurses will retire the soonest, with more than one-third of specialist nurses (including midwives) expected to retire in the short term, according to a 2011 health profile by the Australia-based University of New South Wales and health think tank Burnet Institute.

A nurse at a hospital in Goroka, the provincial capital of PNG's Eastern Highlands Province 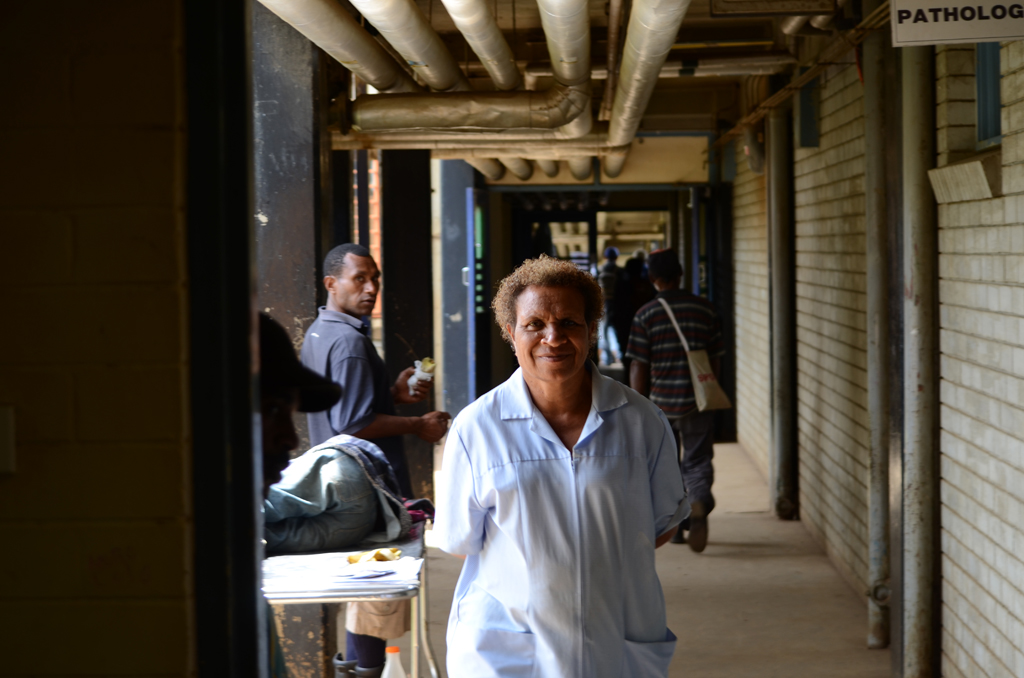 Port Moresby General Hospital in the capital, which is the country’s largest referral hospital, recently recruited two nurses from the Philippines, but critics say this temporary solution diverts attention from the need to boost local health worker training and retention through improved benefits and pay.

About 10 years ago, former Prime Minister Sir Michael Somare moved to bring in nearly 100 nurses and doctors from Cuba on temporary work contracts, but the cost and heated opposition from the local medical community of being “replaced” by foreign workers stymied the effort.

Also, the government recently approved a health workforce plan in 2013.

“We know exactly how many nurses we need and a training plan is now put in place to meet our manpower requirements,” chief secretary to the government, Manasupe Zurenuoc, told IRIN.

Nationwide there are 28 hospitals, 551 health centres and nearly 2,000 aid posts, which together process up to 10 million outpatients and 200,000 in-patients annually, according to the National Health Department.

Zurenuoc added that the National Executive Council earlier this month directed the Department of Personnel Management - responsible for the recruitment and salaries of all civil servants - to finalize salary reforms for CHWs, which will then be submitted for government approval. One proposed change is for the government to do away with a longstanding parallel pay scale system in which CHWs in church-run facilities earn on average 33 percent less than those employed in the public sector.

Of the 4,400 community health workers nationwide, church health services employ a “substantial” number of them, according to the country’s Churches Medical Council, which oversees faith-based health services.