How to deal with Boko Haram violence splits Nigeria: in the north, the centre of bombings and shootings by the Islamist extremists, there is an almost universal demand for dialogue, while in the south the prevailing attitude is that there can be no negotiation with “terrorists” until they end the insurrection that has killed more than 1,000 people since 2010.

President Goodluck Jonathan has repeatedly said he is open to talks, but not with a “faceless” Boko Haram. “You must have a face. You must tell us the reason why you are doing what you are doing,” he said in an interview in June.

The government has also invested in the stick. But the unprecedented defence and security vote of US$6 billion for 2012, collaboration with Western security forces, and the closure of Nigeria’s borders with its northern neighbours, is yet to blunt the Salafists.

The security forces’ Joint Task Force (JTF) has also failed to win the wholehearted support of those they are deployed to protect. “It’s just collective punishment for everybody,” a doctor in the northeastern city of Maiduguri, where Boko Haram began in 2002, told IRIN. “Whenever there is an incident [the soldiers] cordon the area and start beating people… With time it will be the whole society against the military.”

A frustrated state prosecutor added: “Even if you flash your identity card at JTF you are told, `You lawyers, you are the brains behind our problems’. Colleagues have been made to do frog-jumps; there is so much intimidation and disrespect.”

The Christian community welcomes the JTF as a small comfort. But among some Muslims, the majority of the population, it is common to hear the conspiracy theories that the security services are making a fortune out of the chaos and do not want it to end, and may even have a direct hand in the violence.

In June, Jonathan sacked his National Security Adviser (NSA), Gen Andrew Azizi, the man most closely associated with the Boko Haram policy. He was the first southerner to hold the post, from the same state as the president, but he had become a political liability, according to Innocent Chukwuma, director of the Cleen Foundation, a justice sector reform NGO.

Azizi’s replacement, Col Sambo Dasuki, a member of the Sokoto royal family - the heart of the northern establishment - made it a priority to visit the northeastern home of Boko Haram, and publicly enlist the help of traditional leaders in promoting dialogue.

“The country is already in a difficult place, heading down a shaft from which recovery will be very difficult… If the north is effectively Balkanized by the insecurity, God knows what will happen next”

“I think it signals perhaps a different strategy in responding to Boko Haram,” said Chukwuma, “maybe moving away from the more hawkish approach. I also see [Dasuki’s] appointment as an admission they needed someone with a northern identity to better understand Boko Haram.”

Attempts have previously been made to reach out to the group. The most significant seems to have involved Ibrahim Datti Ahmad, president of the National Supreme Council on Sharia, who is believed to have had the respect of Boko Haram’s founder, Mohamed Yusuf. Contact was broken by the militants, who accused the government of bad faith, after the media got wind of the talks. It responded to fresh reports of another initiative in early June by advising the prospective interlocutor, Islamic scholar Dahiru Usman Bauchi, to “steer clear”.

In August last year, 58 percent of Nigerians supported dialogue with Boko Haram, according to a survey by the Cleen Foundation and the Alliance for Credible Elections. But that masked significant regional differences, with 80 percent of the northeast pro-talks, and just 35 percent of the southeast. With the continued attacks on churches in the north, tolerance is evaporating across the predominantly Christian south, even though the majority of Boko Haram’s victims have been fellow Muslims.

“I am annoyed with [Jonathan]. He should be able to demonstrate political will to show that he is in charge, and cut out this cancer,” said Sunday Igbe, director of research and planning at the Christian Association of Nigeria. “[Boko Haram’s] interest is to wipe Christianity from the face of this country.”

The most commonly understood demand of Boko Haram is Islamic shariah law for all Nigeria - which does not leave much room for dialogue in a multi-faith country. “There is a negotiating position, and then there is the true position of a person,” Maiduguri University lecturer and human rights activist Muazu Abubakar told IRIN. “The group has told the world they want their people released from prison - that is their real concern, not shariah.”

Boko Haram is also demanding the prosecution of the police officers responsible for the extra-judicial killing of their members in July 2009, including their leader Mohamed Yusuf, shot while in police custody. Compensation has reportedly been paid to their families, but senior police commanders accused of the deaths are yet to stand trial.

Business is slow in Maiduguri, June 2012 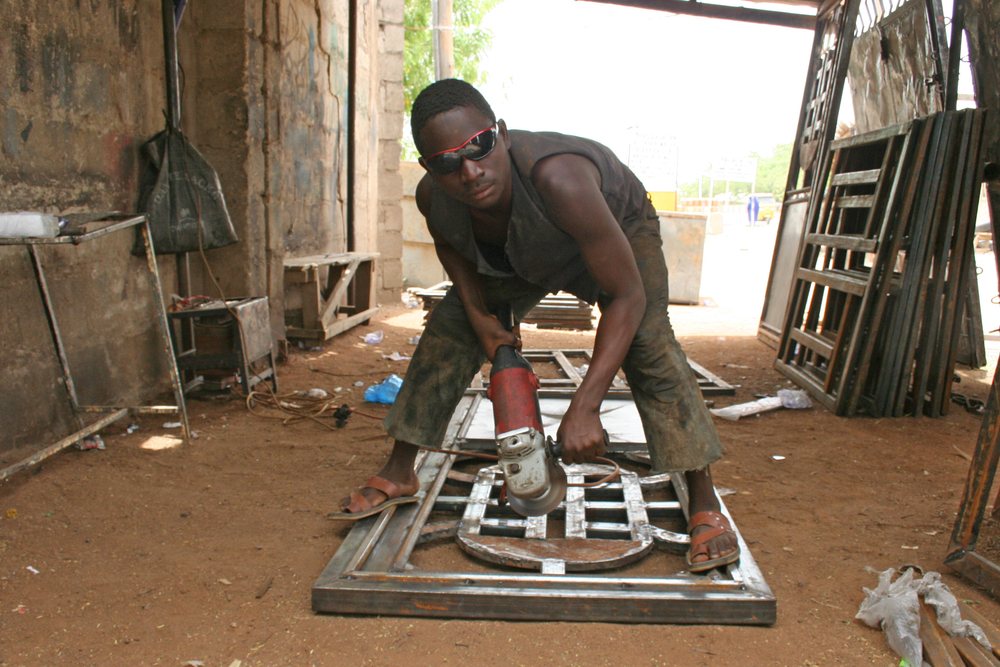 Boko Haram has morphed. Its original incarnation had its roots in a northern millenarian tradition, a response to the corruption and injustice of both the Nigerian state and the Islamic establishment. After the death of Yusuf, a young cleric who had attracted a significant following, power transferred to the more radical Abubakar Shekau, and they announced a common cause with the global jihadist movement.

“It is no longer a single group,” according to political analyst Hussaini Abdu. “My feeling is that there are different tendencies. There is the traditional one, that Yusuf and now Shekau leads, but there are also emerging groups capitalizing on the insecurity in the country.”

On 21 June the US government classified Shekau and two other leaders as “specially designated global terrorists”, but stopped short of listing Boko Haram as a foreign terrorist organization - a decision supported by the Nigerian government and a number of US-based scholars.

Explaining the calculation, Johnnie Carson, assistant secretary of state in the Bureau of African Affairs, said: “Boko Haram is composed of at least two organizations, a larger organization focused primarily on discrediting the Nigerian government, and a smaller more dangerous group that is increasingly sophisticated and increasingly lethal.”

Many in the south believe Boko Haram is sponsored by powerful northern politicians whose aim is to pressure the Jonathan administration into dropping any plans he may harbour of extending his term in office. His election victory in 2011 was a bitter contest, and much of the northern vote is likely to coalesce around a candidate from that region in 2015.

Northern traditional and Islamic leaders have been portrayed as holding the keys to talks. But the suicide bombing in Maiduguri on 13 July, which narrowly missed the Shehu of Borno - second only to the Sultan of Sokoto in terms of traditional hierarchy - suggests the group’s ideological roots remain strong. “It tells us nobody is safe, and that they see him as part of the corrupt system they are fighting,” said Abubakar.

That could complicate NSA Dasuki’s search for suitable interlocutors. “It is now a very difficult situation for people to come forward and offer to negotiate,” noted Abubakar. “Part of the problem is that government has lost credibility over these many years. The tendency is not to believe the government, they have a high credibility deficit.”

To underline Abuja’s alleged lack of sincerity, the major effort by the federal government to solve the Niger Delta crisis - where amnesty and rehabilitation packages were offered to the militants that took on the oil companies, and development funding was thrown at the region - is contrasted with its approach to the north. The sole initiative so far has been a promised US$26 million to build 400 schools for Almajiris - children sent to Islamic madrasas by their families, but who must beg on the streets for their upkeep.

Godson Jim-Dorgu, director of the Environmental Health and Safety Network in the Delta state of Bayelsa, was riled by the comparison. “Boko Haram is a terrorist organization with links to Al-Qaeda. They don’t have an ideology, they’re faceless,” he said. ”Everybody knows what Niger Delta youths were fighting for; they targeted oil facilities and not human beings.”

Nigeria on the brink

Maiduguri University’s Abubakar is equally scathing over the sectarian divide in response to Boko Haram. “I supported the struggle in the Delta. For me, if this [Boko Haram violence] was happening in another part of the country, I would expect there to be collective responsibility to address it. I don’t see it as a northeastern problem; it is a fundamental Nigerian problem that is not being addressed.”

But identifying what the steps to peace are, is just one critical problem. Abubakar calls for an intelligence-led strategy to bring Boko Haram to the table to agree a ceasefire and build confidence. “There must be people they respect and trust that we can reach out to,” he said. The idea that the current leadership may not want to negotiate was an uncomfortable thought.

Politicians are usually willing to ignore the issue of impunity if it can buy a reprieve to the violence, said Chukwuma, but anybody involved in directing Boko Haram’s campaign should not be part of any settlement. “Shekau is not even on the cards, he’s clearly identified as an international terror sponsor, but there are middle-level people we can talk to.”

There is a possible deadline for negotiations, and that is the start of the presidential election campaign, analysts say. If the north is still in turmoil by then, and polling cannot be held in 2015, then the 13 years of civilian rule that Nigeria celebrated in May could begin to look shaky.

“The country is already in a difficult place, heading down a shaft from which recovery will be very difficult,” Chidi Odinkalu, chairman of the National Human Rights Commission, told IRIN. “If the north is effectively Balkanized by the insecurity, God knows what will happen next.”