Join TNH Africa Editor Philip Kleinfeld and guests this Tuesday, 31 March at 3pm CET for an online discussion about the situation on the ground in Burkina Faso. Register here.
OUAGADOUGOU, Burkina Faso

The growing number of COVID-19 cases in Burkina Faso is threatening to overwhelm the country’s war-weakened health system and complicate efforts to respond to one of the world’s fastest-growing displacement crises.

Near-daily attacks by jihadist groups and local militias have forced almost 800,000 people to flee their homes – the majority in the past 12 months – and caused the closure of 135 health centres around the country.

As the number of people infected with the virus rises to 222, with 12 deaths – the most fatalities in sub-Saharan Africa – aid groups told The New Humanitarian it’s not clear how the country will cope with a looming public health disaster.

“It’s frightening what is coming potentially with this virus,” said Laurent Saugy, head of the International Committee of the Red Cross (ICRC) in Burkina Faso. “Armed violence has weakened the health system in dramatic proportions.”

Even in peaceful parts of Burkina Faso, there is a lack of trained health workers and medical facilities, with just one hospital currently configured to receive coronavirus patients, and it only has a handful of ventilators.

Since last week, borders have been sealed and travel has been restricted to and from towns and cities with confirmed cases. Aid groups based in the capital, Ouagadougou, worry that these measures will prevent them from accessing needy people in areas experiencing violence.

The cause of Burkina Faso’s surge in cases is unclear, though doctors and officials involved in the response suspect the source was a well-known Burkinabe pastor and his wife who returned from France together at the end of February.

Before the couple tested positive in early March, they spent time preaching to large congregations, potentially putting them in contact with thousands of people.

At least six government ministers have since tested positive for the virus, as have two foreign ambassadors, from Italy and the United States.

While the majority of cases have been in the capital, the virus has spread to other urban centres, including Bobo-Dioulasso – the country’s second largest city – and the towns of Hounde and Dedougou in the west.

There are fears the number of confirmed cases represents just “the tip of the iceberg”, said Jerry-Jonas Mbasha, an official at the World Health Organisation in Burkina Faso.

There is currently just one hospital with 500 beds and one small clinic set aside to deal with patients. A single testing laboratory in Bobo-Dioulasso – a five-hour drive from the capital – means suspected cases all over the country have to wait at least 12 hours for results.

The government said it wants to establish a second laboratory in Ouagadougou but has no one qualified to set up the equipment in the country. With borders sealed, the process of bringing in an outsider is being delayed. 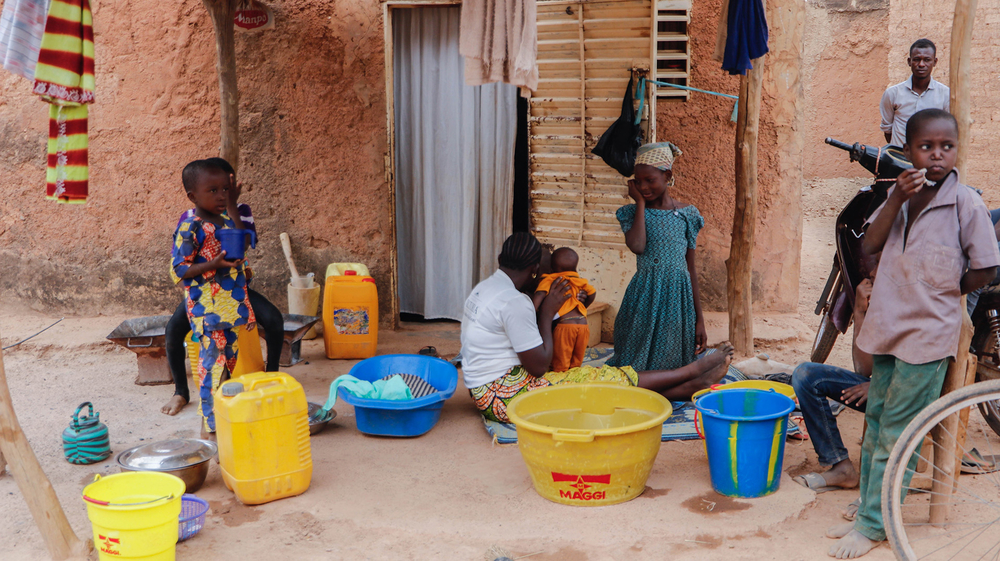 Sam Mednick/TNH
Self-isolation will be difficult for people like Sanata Ilboudo and her family who live in a one-bedroom house in the outskirts of Ouagadougou.

Aid groups are particularly concerned the virus will spread to hundreds of thousands of internally displaced people sheltering in makeshift sites throughout the country. Most live in crowded conditions and lack access to clean water and sanitation.

The closure of health centres, meanwhile, has left more than 1.6 million people in conflict-affected areas with little to no access to medical care.

“Social isolation measures won’t be possible where people are living five or 10 to a room, or all together in small makeshift tents,” said Gustave Yamossou, emergency manager for Oxfam in Burkina Faso. “When the virus hits areas with high levels of displacement, it will spread quickly and could have a disastrous impact.”

Some aid organisations said they are modifying the way they deliver aid to ensure staff helping internally displaced people don’t infect vulnerable populations or bring beneficiaries together in ways that might mean they contract it from one another.

“This is probably a situation where information is aid. If you have more than half a million individuals who have no access to self-care messages… then it’s a huge hole in the system.”

During distributions of food and other essential household items, organisations said they are breaking people into smaller groups of five and ensuring handwashing stations are readily available.

The ICRC’s Saugy said information on how to prevent the spread of the virus should also be provided to displaced people.

“This is probably a situation where information is aid,” he said. “If you have more than half a million individuals who have no access to self-care messages… then it’s a huge hole in the system.”

Since a travel ban on leaving the capital went into effect on Friday, humanitarians are scrambling to figure out how to continue delivering aid to people most in need, and are hoping the government will exempt them from the restrictions.

Mangundu said restrictions on travel in Burkina Faso – as in other places experiencing humanitarian crises – are negatively impacting the organisation's ability to bring experienced staff into the country, while those already present are unable to leave for rest and recuperation.

“This will in turn affect our programme quality, (and) at the same time the rate at which we can reach internally displaced people in critical need of humanitarian assistance,” he said.

The government’s response coordinator, Martial Ouedraogo, said he was concerned about the population respecting social distancing measures such as abstaining from funerals and celebrations.

“When we look at our way of living, we have a lifestyle that is very community [-based],” he said. “Refusing to shake someone’s hand can be seen as a lack of respect.”

Ouedraogo is also worried about sick people visiting traditional healers before seeing medical doctors, or simply refusing to believe the virus is real.

“I am sure that inside the country there are people who don’t believe [in] the existence of this disease,” he said.

Social distancing is far from becoming a habit in Ouagadougou, or around the country. While most people have stopped shaking hands, groups of men praying closely together can be observed every evening, and motorcycles still cram side by side on the road at traffic lights, often with three or more people piled on.

And even for many Burkinabes who are taking the virus seriously, it is hard practically to take the appropriate precautions, with some even struggling to access water to wash their hands.

Ouagadougou resident Sanata Ilboudo said she is unable to carry enough water on her motorbike to feed and bathe her children and account for the added handwashing needed to combat the virus.

The 30-year-old said she lives with her husband and five children in a one-room house, making it pretty much impossible for anybody suspected of having the virus to effectively self-isolate.

“It might be complicated,” said Ilboudo, scanning her small compound for a secluded space. “We’d be obliged to isolate someone, but I don’t know how we’d do it.”

Alarm bells are ringing over the speed and scale of the humanitarian crisis in Burkina Faso. Join TNH Africa Editor Philip Kleinfeld and guests this Tuesday, 31 March at 3pm CET for an online discussion about the situation on the ground.

What are the most pressing needs? What's driving the conflict? How will the country deal with coronavirus? What are the challenges of reporting from a humanitarian emergency?