At the ripe old age of 93, Robert Mugabe, Zimbabwe’s long-serving president, has offered himself as the candidate to lead his ruling ZANU-PF party in elections next year.

In power since independence from Britain in 1980, Mugabe would be 99 should he win the 2018 election and complete a five-year term. He has boasted that he will live – and rule – until he is 100.

His wife Grace, a political power in her own right, has gone even further. Speaking at a rally organised by ZANU-PF’s Youth League last year, the First Lady addressed her husband saying: “We want you to lead this country even from your grave.”

Mugabe has always been respected and feared rather than loved. But his cabinet, stuffed with loyalists, relatives, and praise singers, is now outdoing itself in pushing his cult of personality into overdrive.

Behind the public scenes of loyalty and adulation is an intense power struggle, as Mugabe’s physical frailty becomes evident. Factions are looking for his endorsement in the battle underway over his succession.

His public stumbles (fodder for an irreverent social media) and frequent absences from the country for medical attention, are all the more concerning for party apparatchiks as there is no obvious heir apparent.

“Mugabe wants to die in office and is not interested in seeing his successor,” said Pedzisayi Ruhanya, the director of the Zimbabwe Democracy Institute. “He is not a student of democratic processes.”

There are no threats to his rule from outside the party. He is accused of stealing elections (although he commands support in the rural areas), brutalising the electorate, and infiltrating the ranks of the opposition to sow confusion. Age is his only real challenger.

But the jockeying for power is dangerous. The military and veterans of the guerrilla war against white minority rule have been the power behind Mugabe’s throne. And they want to pick who will replace him.

Over the last year, influential members of the War Veteran’s Association have been expelled from the party. They publicly declared their support for Vice-President Emmerson Mnangagwa – heresy while Mugabe still lives.

In July, Mugabe accused his commanders (who are all ZANU-PF members) of interfering in the party’s internal politics, which he said was tantamount to a coup. A few days later, soldiers rampaged through central Harare beating up the police.

“We are being threatened day and night that if so-and-so does not succeed Mugabe, we will kill you with guns,” the First Lady said last week. “The president sleeps with one eye open.”

This week Mugabe made his move. He sacked Mnangagwa as justice minister in a cabinet reshuffle that has strengthened the position of Grace – Mnangagwa’s chief rival.

The political tussle is being played out against the backdrop of the hardships faced by the vast majority of Zimbabweans. Buoyed by a good harvest, Zimbabwe’s economic growth has climbed to 2.8 percent from 0.7 percent last year, according to the IMF.

But the economy is not keeping pace with population growth. Zimbabweans face shortages from electricity to water to fuel. Banks ration cash withdrawals. Poor service delivery and unemployment adds to the despair. Economic growth is projected to slip back to 0.8 percent in 2018 and turn sharply negative by 2022.

The spending habits of the Mugabes, with money seemingly to burn, is a subject of endless public fascination. Last year more than four million Zimbabweans were in need of food aid, and the government was appealing for $1.5 billion in relief support.

Yet the First Lady’s recent splurging has included a $4 million mansion in South Africa’s posh Sandhurst suburb and a Rolls Royce. Her son from an earlier marriage, Russell Goreraza, bought two Rollers and air-freighted them to Zimbabwe.

The extravagant lifestyles of two other sons – first in Dubai and now South Africa – has earned them the nickname “Boyz dze smoko” (the terrible boys). When Grace allegedly beat up a model she found in their hotel room in August, it caused a diplomatic incident.

A former typist in the office of the president, Grace has not endeared herself to most Zimbabweans. But as a ferocious Mugabe loyalist, she is not to be underestimated.

The plan seems to be that Mugabe will run and win in 2018, and then secure the interests of his family as best he can. The risk is the instability this strategy could cause.

The following is a rough guide to the main protagonists in the succession drama:

When news first filtered out that Mugabe was lining up his wife (and former mistress) as a potential successor, the general reaction was one of derision and dismissal. 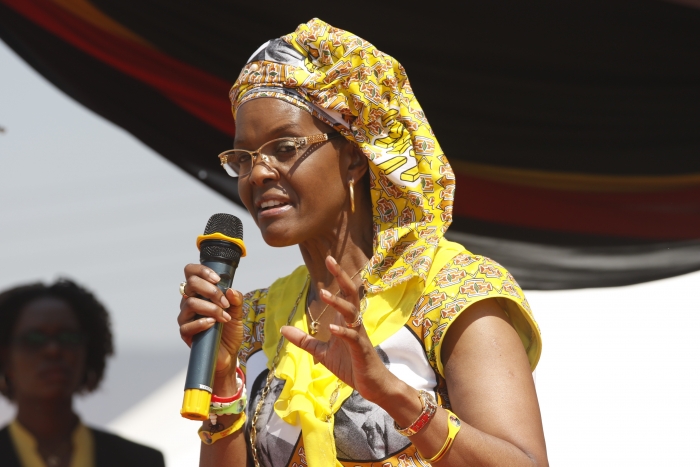 IRIN
A typical example was the casual sexism of former war veteran’s leader Jabulani Sibanda, who scolded party members in 2014 for “plotting a bedroom coup”. He warned that “power is not sexually transmitted”.

Grace, 52, remained in the shadows for many years after the marriage, concentrating on charitable works. Shopping trips abroad earned her the unenviable nicknames “Gucci Grace” and “The First Shopper”.

But in 2014 she emerged to conduct “meet the people” public gatherings, where she sensationally attacked then vice-president Joice Mujuru, alleging she was aiming to overthrow Mugabe.

Mujuru, a powerful former guerrilla leader, had the support of a significant section of the party as Mugabe’s successor. But Grace’s accusations of “treason, corruption, and witchcraft” were enough to sink her.

Grace is secretary of ZANU-PF’s Women’s League and has the active support of the Youth League. Some politicians have coalesced around her to form a faction called Generation 40 – a grouping of younger leaders that deliberately draw a distinction with the party’s old guard.

With Grace as their leader, they have the ear of Mugabe and have begun to set the party’s agenda.

Grace has become so powerful that at public meetings addressed by Mugabe, she has summoned erring party and government officials to the podium for a public dressing down.

Ruhanya believes that in reality Mugabe pulls the strings of G40. “Mugabe is the leader of G40,” he told IRIN. “That explains why no member of that faction has suffered any political setbacks as they enjoy [his] protection.”

Some observers suggest Grace, with the support of her husband and the power of the state, could easily win the succession battle. She once told a public meeting that she was “already ruling”.

But Ruhanya thinks this is premature. “Mugabe knows that his wife is ambitious, but she lacks the capacity and sophistication to handle complex party and state matters,” he said. “Grace can only behave the way she does for as long as Mugabe is alive.”

Standing in the way of Grace is Mnangagwa, 75, a once-feared former spy chief and one of the few surviving members of the first cabinet in 1980. But his Lacoste team [derived from his “crocodile” nickname] are being purged. 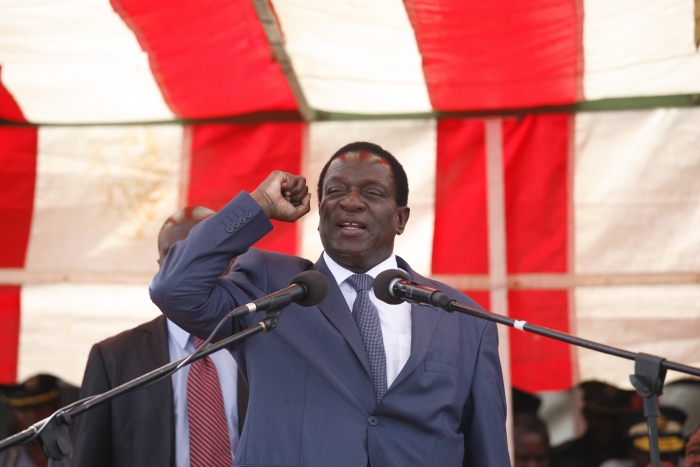 IRIN
Emmerson Mnangagwa
His influence was already on the wane, outflanked by Mujuru in the battle to control ZANU-PF. Now his political problems are turning potentially deadly. He was airlifted to South Africa in August after reacting to food consumed at a political rally.

His supporters said he was poisoned, with the suspect ice cream supplied by the First Lady’s dairy company. The allegation of foul play has been vehemently denied, with Grace reportedly claiming he wasn’t worth poisoning.

Chris Mutsvangwa, a war veterans’ leader and former minister expelled from the party over accusations of supporting Mnangagwa, believes the G40 bid for the presidency – using Grace – will collapse.

“Grace does not exist [as First Lady] in the constitution. She is a frantic if hopeless would-be usurper of power,” he told IRIN. “The G40 putchist agenda is bound to fail in the face of popular resistance.”

Until recently, Defence Minister Sydney Sekeramayi, 75, was not in the succession mix. He has held several portfolios since independence, but was seen to lack political clout.

He was thrust into the spotlight this year when his “humility” and “consensus-style of leadership” was contrasted with the ambition of Mnangagwa by an acolyte of the First Lady.

Grace then went on to strengthen his hand by describing how Sekeramayi, a Swedish-trained medical doctor as well as guerrilla, had saved Mugabe’s life when he was struck by a severe bout of diarrhoea.

But in 2014 he was out in the cold over his perceived support for Mujuru. It was Mugabe who brought him back into the political fold. 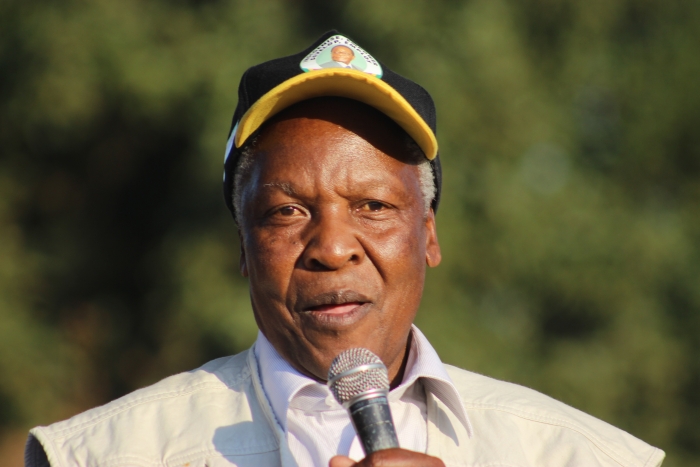 IRIN
Sydney Sekeramayi
All three men ­– Mugabe, Mnangagwa, and Sekeramayi – share one thing in common. They were key actors in the ethnic cleansing in southwestern Matabeleland in the early 1980s in which 20,000 Ndebele civilians were killed.

The military distrusts anyone who is not a veteran of the independence struggle. Sekeramayi has the right credentials, and could be an alternative pick by Mugabe should Plan A – handing over to Grace – prove impossible.

As the ruling party continues to implode, along with the country, Ruhanya believes this is all to be expected.

“The chaos happening in Zimbabwe and ZANU-PF is what happens when the end of an authoritarian era approaches,” he said.