The black-clad police toting semi-automatic rifles barely get a glance from children glued to the TV as officers search their home in Iligan City, near besieged Marawi, where Philippine security forces have been battling Islamist militants for almost three months in clashes that have killed 562 insurgents, 168 government troops, as well as 45 civilians, according to the latest official figures.

Scenes like this have become commonplace since President Rodrigo Duterte declared martial law on 23 May throughout Mindanao, the southern island home to most of the country’s minority Muslims.

Mindanao is also home to an increasing number of Islamist militants, including the Maute group, which pledged allegiance to the so-called Islamic State in 2015 and took over parts of Marawi prior to the martial law declaration. Security forces say they have since wrested back control of all but two pockets of the city and are now trying to track down Islamist fighters who may be trying to blend in with the local population.

“We have to profile the Muslim areas,” said Iligan City police superintendent Roy Ga. “This conflict in Marawi – unfortunately, it is being committed by Muslims, so we have to make sure there are no sympathisers with the terrorists in this area.” 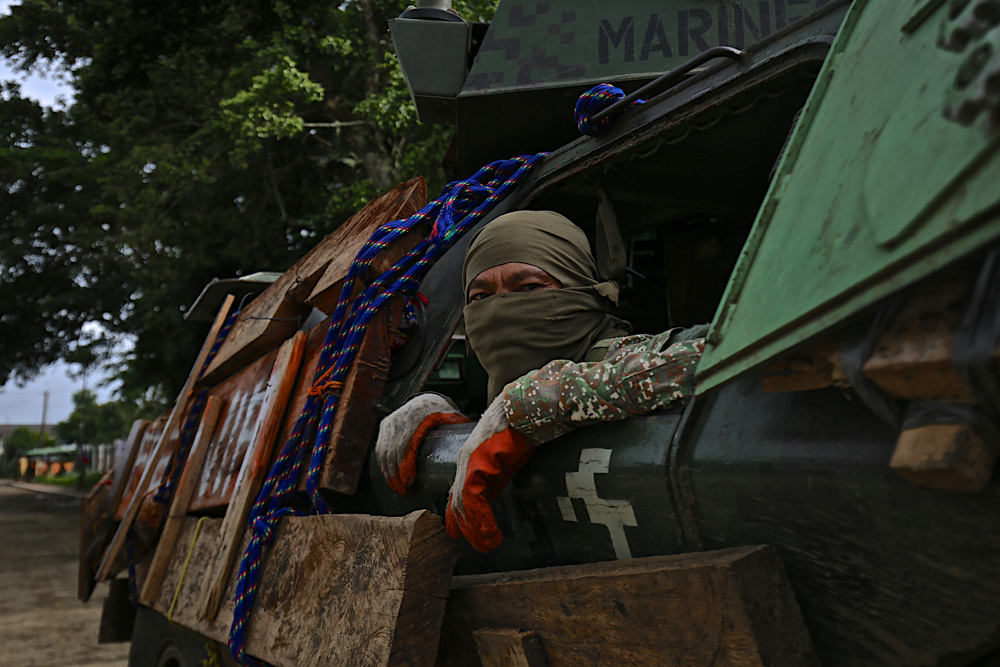 Wes Bruer/IRIN
A Philippine Marine pokes his head out of his battered armored personnel carrier that has been reinforced with wood and other raw materials to blunt the blow of enemy fire in Marawi City, Philippines.
The fighting began with a failed attempt by security forces to capture Isnilon Hapilon, a member of the militant group Abu Sayyaf who the government says is affiliated with IS. The operation was foiled when Maute militants came to Hapilon’s aid, attacked security forces, and took control of the city centre.

Philippine security forces have still not managed to dislodge Maute fighters, despite airstrikes that have levelled entire neighbourhoods. The ongoing fighting has driven 360,000 people from their homes, according to a 7 August report by the UN emergency aid coordination body, OCHA. The report cited government estimates that Maute is holding as many as 100 civilians hostage.

‘Surrounded by people with guns’

Most of those who fled Marawi are staying with host families in nearby communities. The OCHA report said that about 23,000 people are sheltering in “evacuation centres”, which have been set up in places like the Santa Elena Education Center, a school in Iligan City, which is 40 kilometres from Marawi. 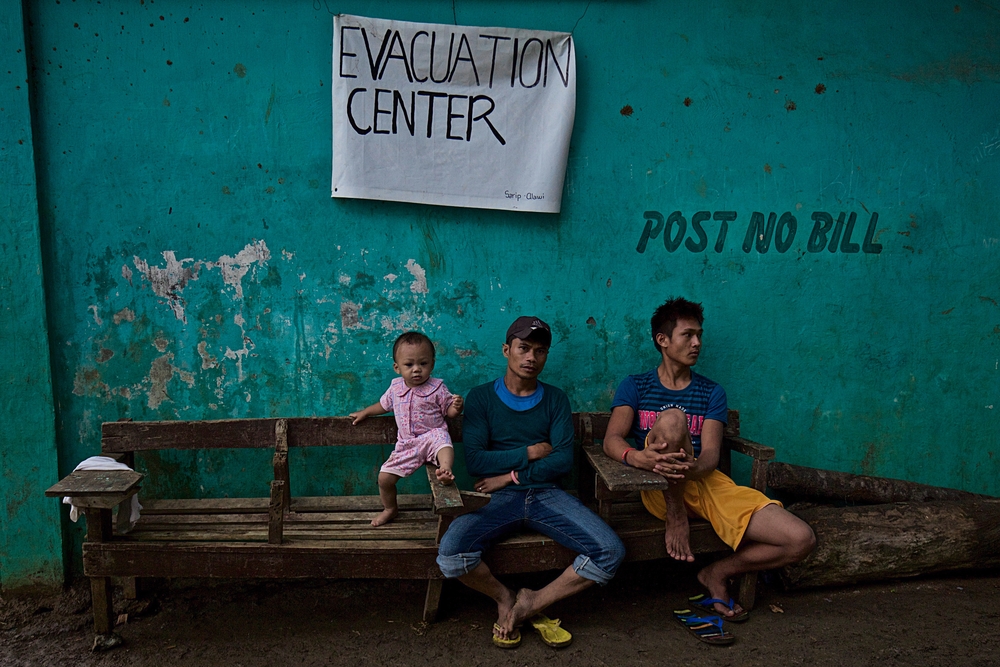 Wes Bruer/IRIN
A father, his son, and young baby sit idly outside one of Lanao del Sur’s newest evacuation centers just miles from the heart of the fighting in Marawi City, Philippines. Many of these centers lack basic necessities.

“Even before the fighting, many people in Marawi City were armed with guns and it made my mother nervous,” said Isabel, a 14-year-old who fled with her family to take shelter at Santa Elena. “Now, we have escaped the fighting and we are still surrounded by people with guns.”

Mindanao has been in a state of conflict for decades, but there have been brief periods of hope while the government negotiated with the main insurgent groups. A peace deal with the largest Muslim insurgent organisation, the Moro Islamic Liberation Front, has been in limbo since the previous Congress failed to pass legislation that would have provided a legal foundation to establish a semi-autonomous region.

Duterte’s declaration of martial law gives his security forces greater powers to search out Islamist fighters, but rights groups and others fear it could exacerbate the conflict if he keeps extending it or if it is abused. They point to Duterte’s blood-drenched first year in power as evidence of his autocratic tendencies and disregard for human rights. In a 20 July report, Human Rights Watch said at least 7,000 people have been killed in Duterte’s self-proclaimed war on drugs, which has overwhelmingly targeted poor people rather than criminal kingpins.

On 22 July, Congress approved Duterte’s extension of martial law until the end of the year. Risa Hontiveros, a high-profile senator who voted against the extension, voiced her opposition on Twitter, making reference to the casualties of Duterte’s violent year-long crackdown: “I do not trust a government that has played God with the lives of 8-12 thousand Filipinos to wield martial law judiciously.” 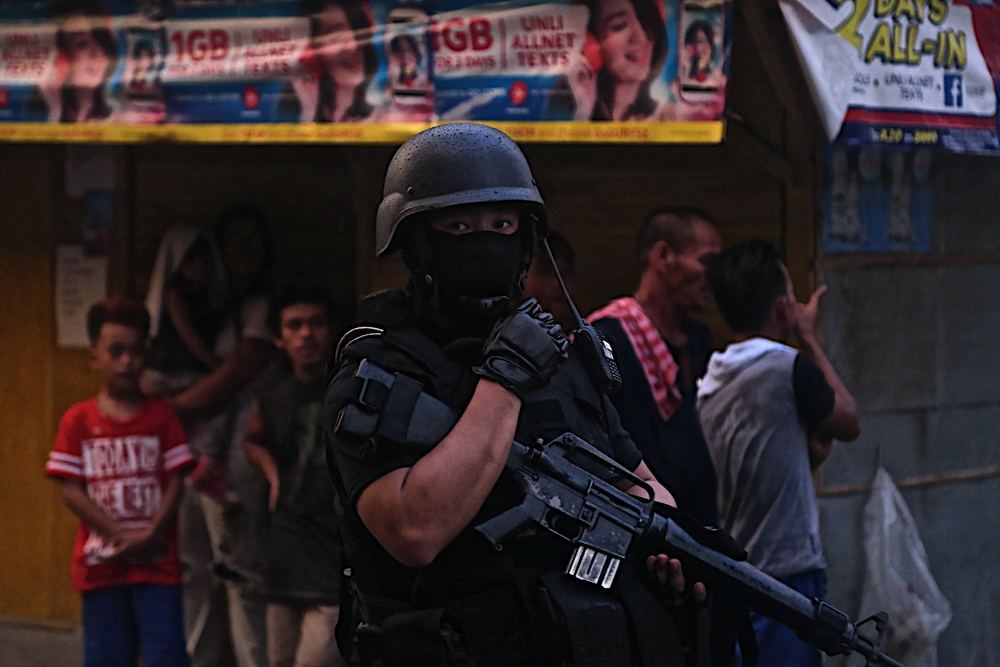 A Philippine National Police Scout patrols the streets of a predominantly Muslim neighborhood in Iligan City, Philippines, while other officers search the inside of homes and question the people living there about any ties to radical Islamists.
When martial law was first declared, Human Rights Watch warned that it should not be “a free pass for abuse”, as that would cause the strategy to backfire by alienating those affected by the conflict.

For now, many people in Iligan City seem supportive of the security forces’ efforts to track down militants, despite the disruptions to their daily lives. A 9pm curfew is in place and walls are plastered with posters that say, “Wanted: Local Terrorists”, and show the mug shots of 30 men. Police check those mug shots against drivers’ licenses at checkpoints throughout the city.

“If you talk to the people out here helping the authorities, you will see it is Christians and Muslims out here together,” said Mary Ann, who brought tea and snacks to officers searching her neighbourhood. “It is the only way we will all get through this mess."

Residents have also been asked to cooperate with security forces and report any suspects, even though this can lead to false alarms.

On a recent Monday night, police responded to a call from a neighbourhood watch group that reported a man stockpiling weapons. They pried open the man’s door and he awoke to find them inside his house inspecting only a homemade spear gun, which he said he made for his own protection.