A woman with a pink cloth wrapped around her head climbs out of a window on the fourth floor of a residential building. She peers at the ground far below, clutching onto the window ledge as voices in the background yell at her to come inside. Instead, she jumps, her scream lingering for four seconds before she hits the ground.

The video was broadcast on Lebanon’s Al-Jadeed TV in March, with a voiceover explaining that the woman was an Ethiopian domestic worker in Khalde, an area south of Beirut.

According to statistics obtained by IRIN from General Security, Lebanon’s intelligence agency, migrant domestic workers in Lebanon are dying at a rate of two per week. Many of the deaths are suicides or botched escape attempts in which migrant women choose to jump off buildings rather than continue working in abusive and exploitative situations.

Rights groups have been advocating for better protections of migrant workers in Lebanon for years and in 2014 domestic workers managed to found their own union – the first of its kind in the region. Yet little has changed. Women coming from Ethiopia, Bangladesh, Sri Lanka, the Philippines, Kenya, and other developing countries are still bound by the kefala (sponsorship) system, which gives employers total control over their lives.

Rahwa*, a 37-year-old from Eritrea, escaped after five years as a domestic worker for a wealthy family in Tripoli. She received no salary, no days off, and slept on the kitchen floor. She suffered beatings from her "madam" and sexual harassment from the woman's husband. “It was hell,” said Rahwa, who was not allowed to contact her family in Eritrea. Now she’s a registered refugee and is informally leading a migrant workers’ church in Beirut. She told IRIN that many of the women who come to her church feel trapped by the conditions of live-in domestic work. “Many are going crazy. Even when they run away, they live in rooms with six or seven people stuck together. That makes you crazy too,” Rahwa said.

The increase in migrant workers’ deaths coincides with a decrease in public reporting and enquiry. The only NGO actively tallying migrant domestic workers’ deaths is KAFA, a Lebanese women’s rights group, which relies on local news reports to map cases. They have found only 10 to 12 cases a year on average since 2010, and hadn’t detected the recent increase.

At a migrant community centre in Beirut, 37-year-old Ethiopian Rahel Zegeye, a volunteer with the pro-migrant rights Anti-Racism Movement, said that suicides are difficult to document because many women who die never left their employers’ homes. Zegeye has tried to follow up on several suicide cases but said: “I don’t have power to ask the government anything here.” She swiped through photos of injured Ethiopian domestic workers on her phone: some unconscious and bruised, others pregnant, sick, or bleeding on the floor – all of them women, many of whom Zegeye said had since died.

Ethiopia has banned labour migration to the Middle East, but migrant women continue to arrive illegally from there every day. Unseen and unrecorded, they are locked into work situations that often end in abuse, imprisonment, deportation or even death.

“So many Ethiopians come here… Why doesn’t the Lebanese government stop them?” said Zegeye. “Our young generation is dying here.”

KAFA communications coordinator Maya Ammar said her organisation had tried to gather more information about migrant deaths reported in the media from General Security, “but the file is closed after 24 hours, with no further investigation. We don’t know the girl, her name, her family or how to reach them. We ask the Ethiopian embassy, and they don’t cooperate much. No one is following up.”

General Security declined to comment on the causes of death and the Ministry of Labour could not be reached for comment.

Halima Mohamed, Ethiopia’s Consul General in Lebanon, refused to discuss details of deaths, saying there were only a few each year and that the embassy cannot pressure Lebanese authorities to investigate or prosecute. “If the girl dies, we are always looking for a report. But in a country where there is no rule of law or accountability, how do you trust [it]? You cannot verify anything,” Mohamed told IRIN. “These girls are locked into homes for years. They are young ladies with no knowledge who cannot protect themselves.”

Ethiopia’s approach of banning citizens from going to work in Lebanon has been tried by Nepal, the Philippines, and Madagascar at different times, and yet the number of migrant domestic workers in Lebanon rose from just under 130,000 in 2014 to nearly 170,000 in 2016, according to the Ministry of Labour – and that is excluding those who arrive without formal work permits. “We banned sending working girls to all of the Middle East years ago, but unofficially, there is trafficking,” Mohamed said. She explained that Ethiopians can easily come as tourists, or via third countries, and then obtain a work visa after arriving in Lebanon.

Zeina Mezher of the International Labor Organization said travel bans actually increase migrant workers’ vulnerability. “We’re not at all supportive of bans in countries of origin. They put migrants at more risk of exploitation and trafficking,” she told IRIN.

Instead, ILO advocates for comprehensive bilateral agreements between origin and destination countries to regulate recruitment, migration, and working conditions. Such agreements “should have the migrants’ rights at their heart”, said Mezher.

Farah Salka, executive director of the Anti-Racism Movement, said the Lebanese government has little interest or capacity to change its migrant labour system. “There is nothing called law for migrant domestic workers here. It’s not that there is bad law; there is no law,” Salka explained. 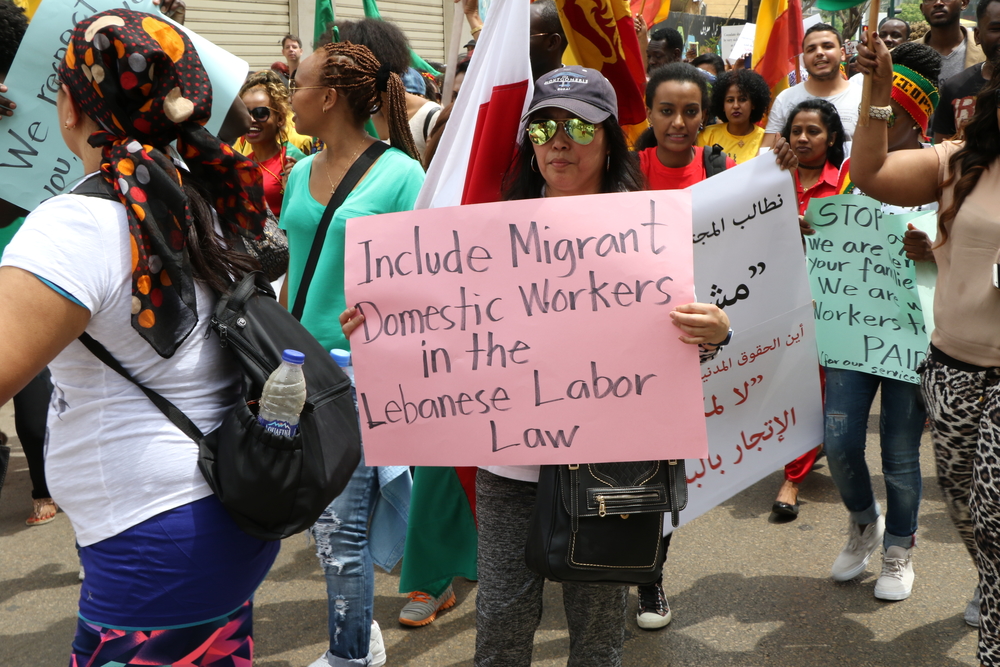 Domestic workers are excluded from Lebanon’s labour law, which means they have no guarantees to a minimum wage, days off, or recourse in cases of withheld salaries, sexual, verbal or physical abuse. Instead, they have the kefala system, which stipulates that migrant workers must live with their employers, and cannot change workplaces without their employers’ consent.

Workers often try seeking help from their agencies, only to be ignored or further exploited. After being beaten and locked inside by her employer, 22-year-old Kenyan Tenesia* asked her agency to help her. Instead, they confiscated her passport and sent her to work for other families without pay. “The agent told me to wait and work, and he will get money for my ticket to go home,” Tenesia said. She worked another year and four months before getting in touch with the Kenyan embassy, which helped her escape to a women’s shelter run by Caritas. She still doesn’t have her passport or money for a flight home.

NGOs provide some assistance to migrant workers, but real changes to their conditions would require top-down policy change, which is not a priority for the Lebanese government according to Ammar of KAFA. “There’s no intention at all to reconsider any of the kefala system. The government and public security are convinced that it protects the worker by controlling them,” she commented. “There are lots of racist assumptions – that these women are weak and need to be kept with a family, for example.”

The domestic workers’ union was set up in late 2014 under the wings of the National Federation of Worker and Employee Trade Unions in Lebanon (FENASOL) with the aim of empowering domestic workers to protect and advocate for themselves, said Farah Abdallah, a FENASOL representative. But as migrants are not allowed to unionise under Lebanese law, the union’s president is Lebanese and it has primarily provided migrant domestic workers only with access to Lebanese people who can speak up on their behalf. 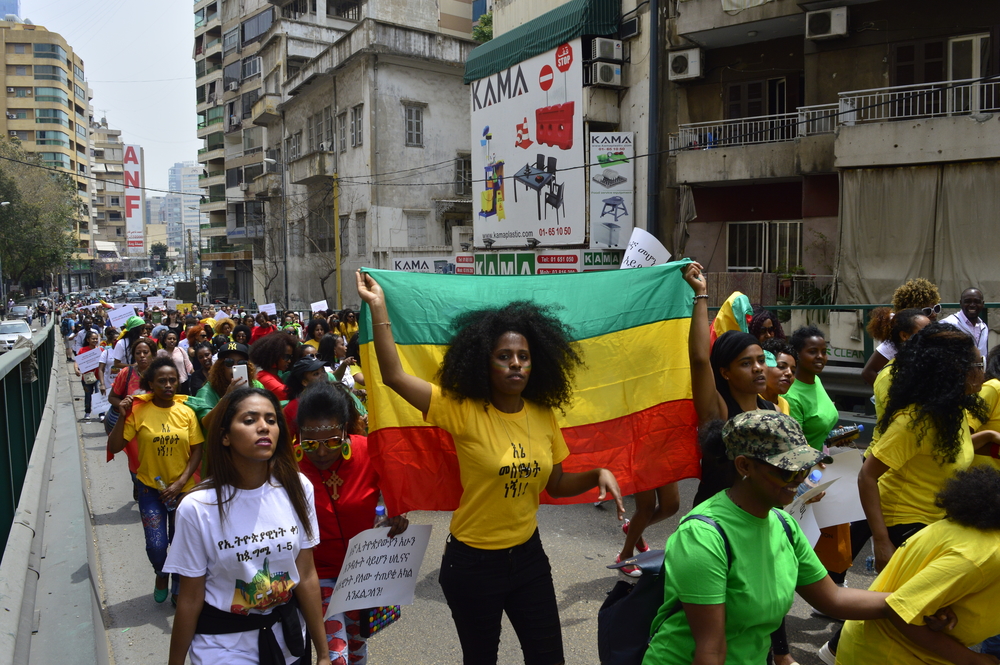 “We report problems to FENASOL, and they talk to the employers,” said 44-year-old Filipina Idan Tejano, president of the union’s general assembly. She came to Lebanon in 2012 as a migrant worker, but left her employer after six months because she wasn’t receiving her salary or any days off. Under the kefala system, she is now considered an illegal runaway. “We don’t have papers, so we cannot go to report our problems. If we tell the police that the employers did not give us salaries, they will arrest us,” Tejano said.

Fear of arbitrary detention and deportation has limited migrant workers’ ability to advocate for legal reforms and better working conditions. “No one wants to take risks in any kind of organising,” Salka said. Most migrant domestic workers who are still with their employers can’t leave the house, so those who can attend events like marches are mostly illegal “runaways”, and thus at risk. “What if we have a candlelight vigil with 20 workers, then police show up and take them? What can we do for them?” Salka asked. “Nothing.”

[TOP PHOTO: An Ethiopian migrant domestic worker holds a child during the annual Migrant Workers' March, held in Beirut every year on Workers' Day to advocate for better working conditions and accountability for migrant abuse and deaths. Credit: Anti-Racism Movement]

*Full names withheld for the source’s own safety