Christian tends to both the living and the dead. His workplace is the cemetery of Kinsuka, on the western edges of Kinshasa, the sprawling capital of the Democratic Republic of the Congo. Here, over the last 25 years, he has buried thousands of people, placing many of the tombstones himself. On top of the graves, which sprout among the tall grass, Christian shaves the heads and beards of the living – part of a sideline hustle he needs to make ends meet. 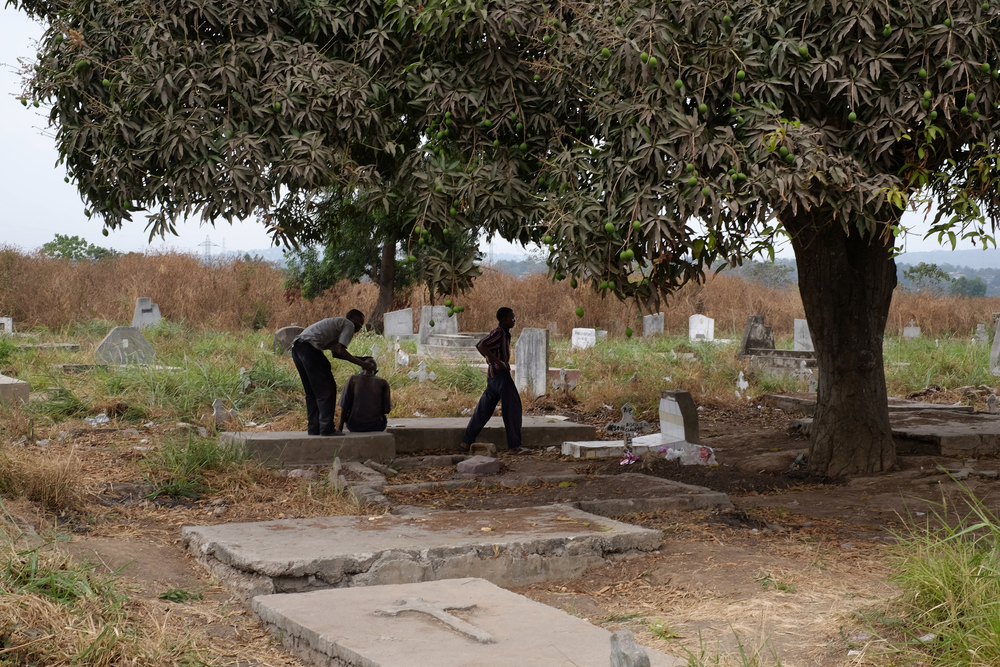 Sheet-metal huts spring up among the graves. Some are the ghosts of brick houses that once existed nearby. The owners jealously guard the property titles they obtained through payoffs to local functionaries. Likasu is the local name for a small, sweet-tasting fruit. But in Congo, it also refers to the money that passes under the table to officials and bureaucrats to open doors or obtain permits.

This is how hundreds of families received permission to build in the Kinsuka cemetery. But with new arrivals each day, the value of land in the cemetery continues to rise and the likasu is never enough. Houses are demolished, others are built, and all the while new graves are added to those that already exist.

The Kinsuka cemetery is the reflection of a city in which the dizzying growth in population tears down the walls between the living and the dead. 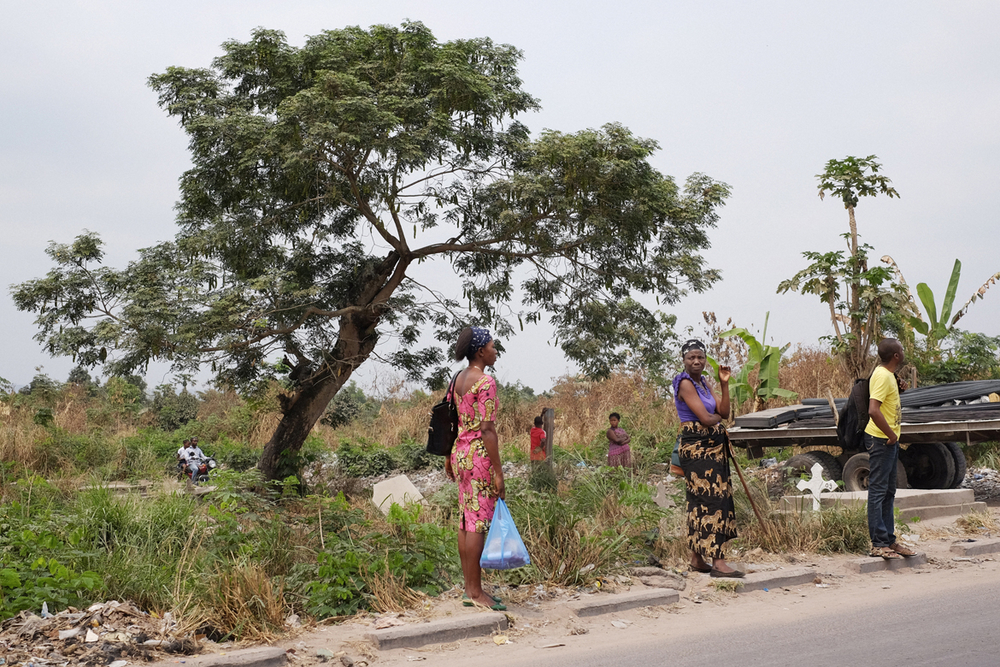 New Kinshasa residents, known as Kinois, arrive from eastern provinces torn by myriad guerrilla conflicts, from central provinces where mines overflowing with diamonds are just a memory, and from the north where the recent conflict in Central African Republic has forced refugees from previous wars to flee.

Each week, thousands sail from Kivu, Kasai, and Équateur down the Congo River, travelling for days in barges that are like floating villages, up to where a bend in the river widens into a large bay. There, on the southern shore, shrouded by the steam rising from the river, stand the tall buildings of Gombe, the business district of Kinshasa that during the colonial era was off-limits to the local population. 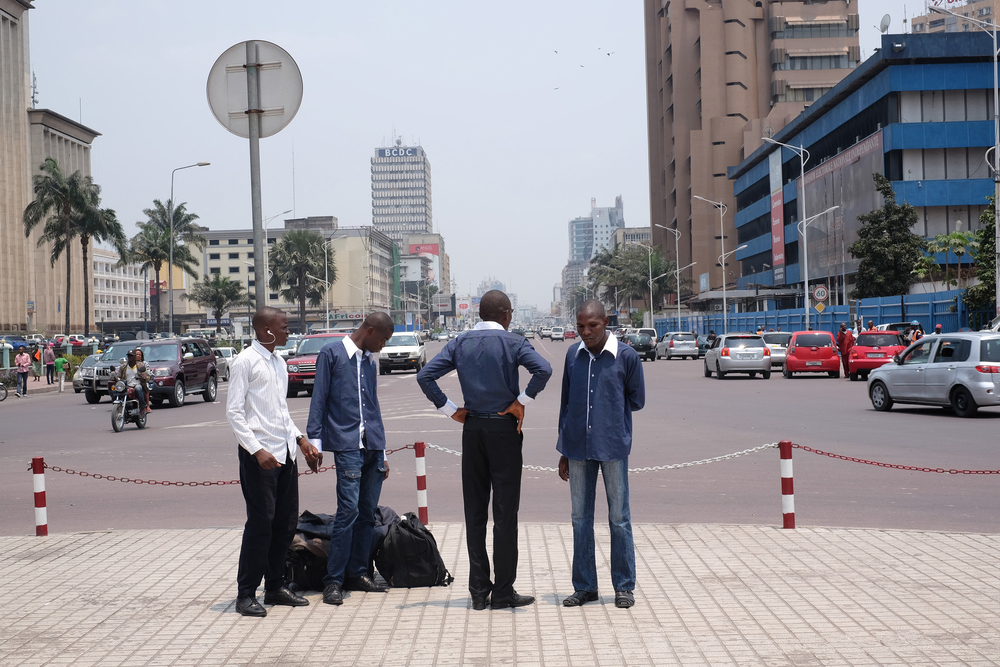 According to estimates by UN-Habitat, the UN agency concerned with sustainable urban development, 390,000 people pour into Kinshasa each year to escape war and poverty, but also to study or to follow a dream.

It is as if, each year, the capital swallowed an entire mid-sized city, absorbing it into an urban fabric weaved out of 12 million souls.

This year Kinshasa made it into the top three of African mega-cities, third after Cairo and Lagos, in a region with the world’s highest rate of urbanisation. According to forecasts, by the year 2035, half of all Africans will live in urban areas. 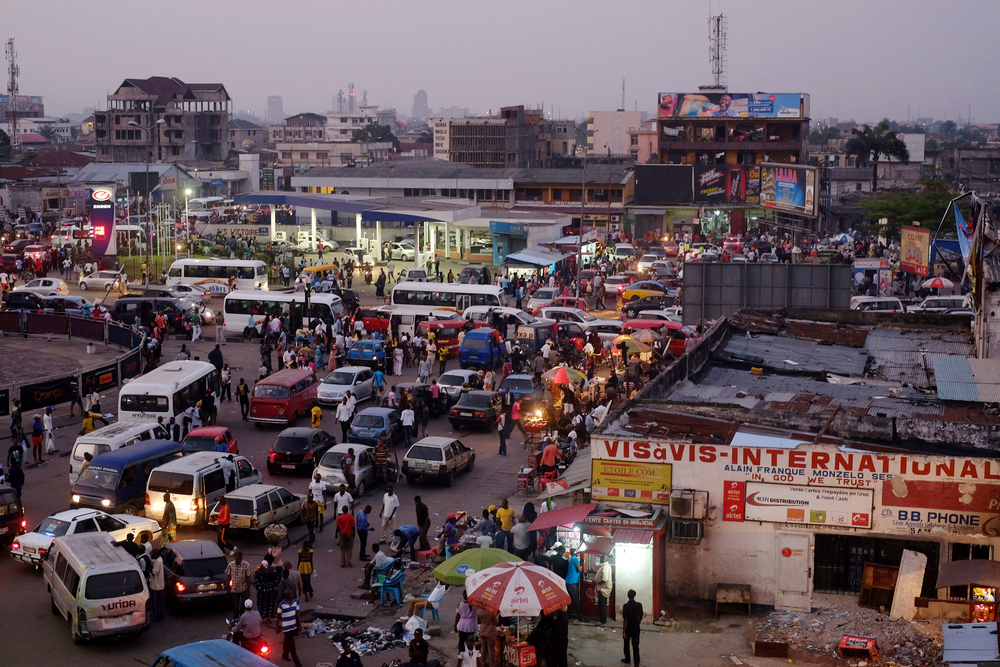 And yet already, two inhabitants out of three in Africa’s cities live in shantytowns. The action plan from a recent finance for development conference in Addis Ababa warned that the too-rapid demographic boom could undermine already fragile urban areas, especially in terms of water infrastructure and waste disposal services, increasing the risk of epidemics.

In 2012, WaterAid, a British NGO, launched a programme to study sustainable water solutions for the cities of Maputo (Mozambique), Lusaka (Zambia), Lagos (Nigeria), and Kinshasa. According to John Garrett, a WaterAid analyst, the case of Kinshasa is especially dramatic.

“The city lacks a public sewer system and only the well-to-do neighbourhoods have septic tanks,” he says. “In some areas, there are public toilets managed by RATPK [the public entity that manages the water mains], some NGOs, and private operators. But the mass of organic waste produced daily is so high that most is disposed of in the environment.” 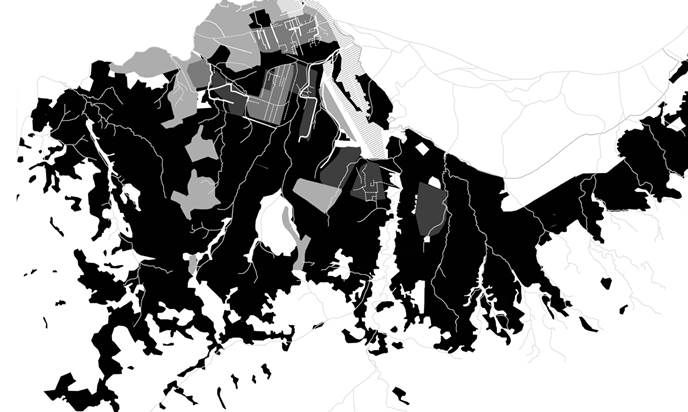 Affectionately known as Kin la belle, Kinshasa is nowadays attracting the less salubrious moniker Kin la poubelle because of the enormous amount of stinking garbage produced and the government’s inability to manage its disposal.

The European Union, USAID, and a number of national development agencies have launched programmes to improve urban infrastructure. But for most international organisations, Kinshasa is just a base for operations in the eastern part of the country where the civil war rages on.

Some of Congo's trading partners, first and foremost China, have repaired the major roads in the capital in exchange for mining rights. But there are still largely neglected areas even just a few kilometres from the building where President Joseph Kabila has governed since 2001.

Pakadjuma is an illegal settlement that extends along the rail line and next to a natural basin into which waste from the city’s septic tanks are dumped. The Kaluma River runs through the shantytown, crosses through the basin and then continues, flowing into the Congo River. Despite being nothing but an agglomeration of shacks, Pakadjuma is one of the oldest continuously inhabited areas in Kinshasa.

From the early 20th century, its strategic position as a transport hub made it a crucial junction for people converging on the capital – dreaming of a better future, selling their labour, doing what it took to get by. Back in the 1920s, this was ground zero for the HIV epidemic, according to a study by the Universities of Oxford and Leuven. 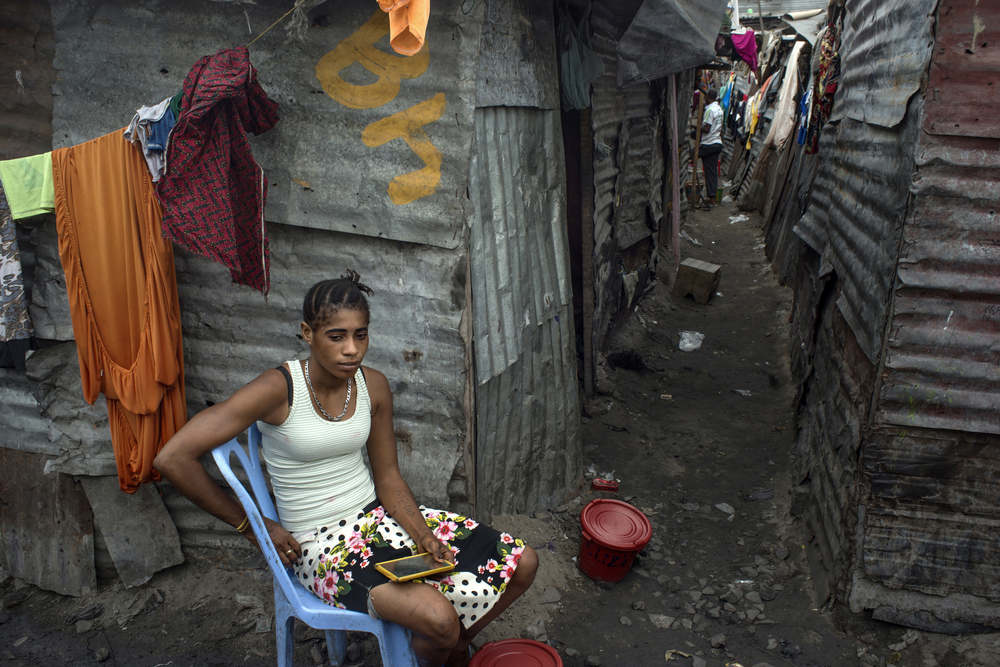 A century on, Pakadjuma remains the district for cheap sex, carried out in the kuzu brothels where prostitutes work for as little as 50 cents or in exchange for the fish the area’s fishermen are unable to sell in the market.

According to Nicolas Muembe, a nurse who runs the only accessible clinic in the area, one third of those who come to him are HIV-positive. Most of his patients are women, and the virus spreads quickly in bodies that are already weak. “Many of the HIV people we treat have already had cholera in the past,” he says. “They are exposed to chronic dysentery and new infections that spread as a result of the precarious sanitary conditions.” 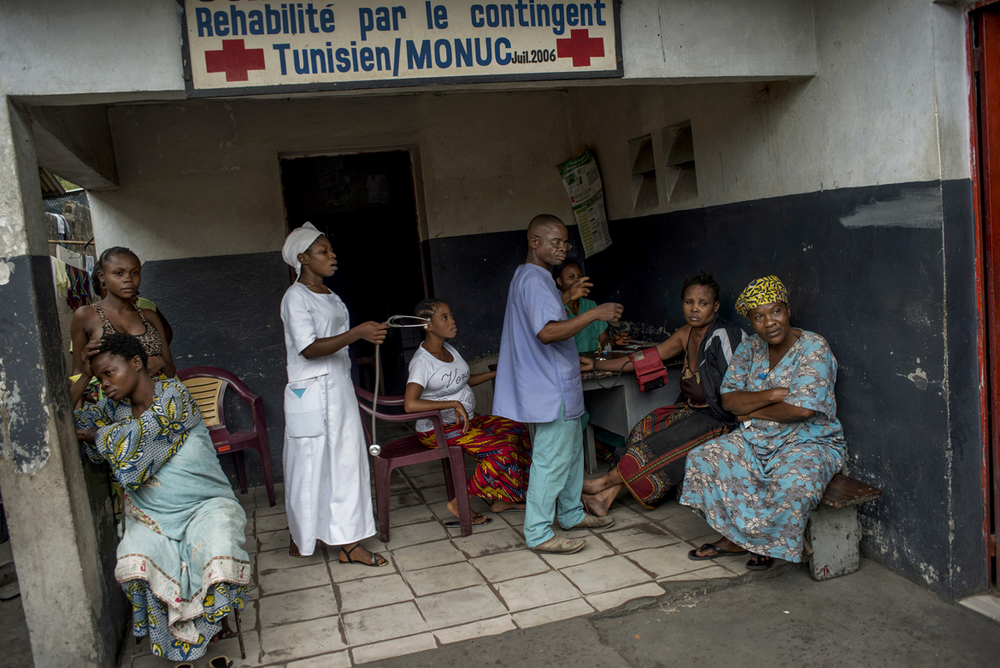 There are just two brick latrines for a population of several thousand inhabitants. The sewers are a network of rivulets that overflow during the rainy season, facilitating the spread of diarrhoea and intestinal parasites.

Taking turns on the limited number of beds in the clinic are women giving birth and the seriously ill. Only in the wake of a cholera epidemic in 2013, which resulted in hundreds of victims, did the Ministry of Health establish another clinic in the area. Currently, it’s being used exclusively for tens of thousands of refugees who arrived in the last year from neighbouring Congo Brazzaville.

There are no figures on the population of Kinshasa’s shantytowns: the only places where new arrivals can afford accommodation in a city that, according to the consulting firm Mercer, is the 13th most expensive in the world, right behind London.

The Congolese and expat elite enjoy services that meet international standards in gated communities. Cité du Fleuve is a residential area being built on a peninsula on the Congo River. The development by Hawkwood Properties, an investment company based in Lusaka, Zambia, is turning the dreams of an exclusive elite into an exclusionary reality. 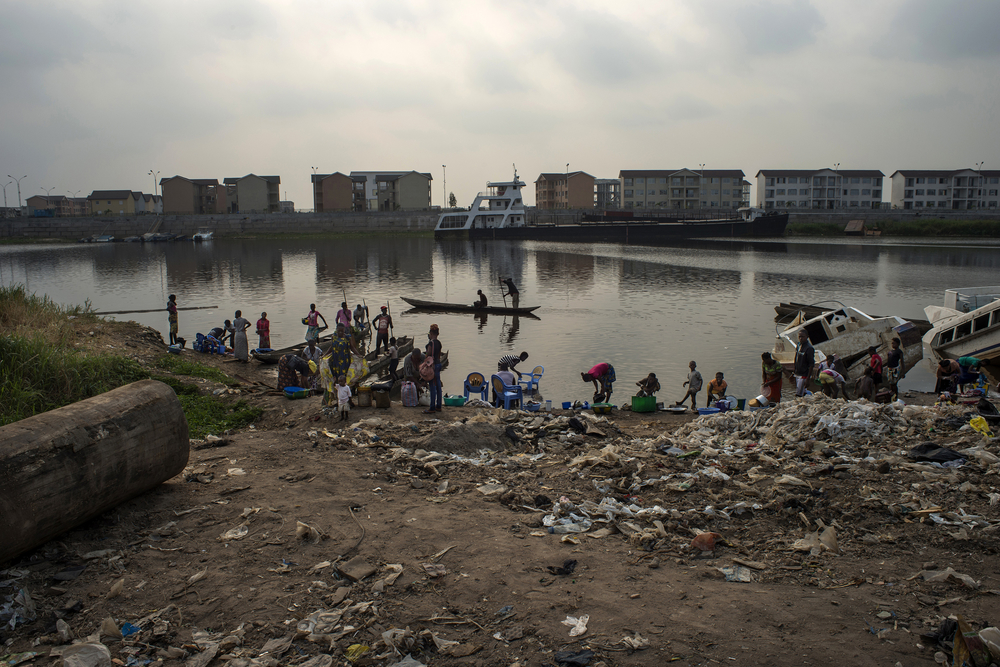 Apartment buildings and single-family homes in a variety of styles line the broad, well-lit streets. A white Hummer limousine is parked on one of the main roads. Renting it costs $350/hour and the mechanic who is working on the car says it’s already booked months in advance. 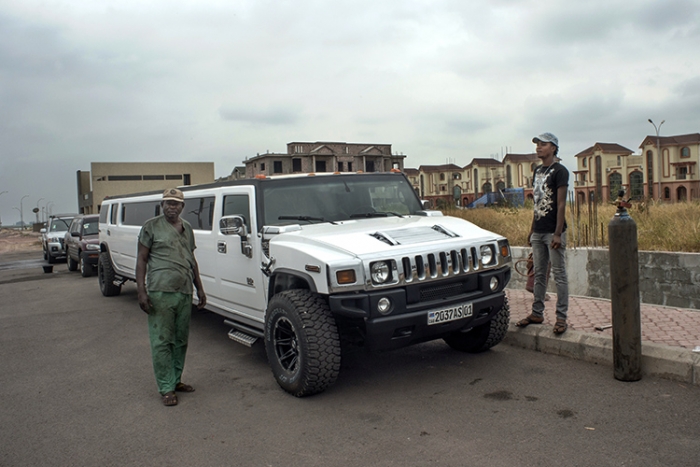 Many of the homes in the complex are still empty, but the prospects are good and soon stores and supermarkets will be opening. The concept behind Cité du Fleuve is to create a community that is autonomous from the rest of Kinshasa, a fragment of luxury on the Congo River, a counter to the country's image of poverty and sickness.

And yet these images remain, just beyond the protective fence, where dugout canoes slowly glide by. Thousands of fishermen live in a mass of huts squeezed onto a small patch of land, exposed to the regular flooding of the river. They say their situation has worsened since the construction work on Cité du Fleuve began in 2008, but they can’t leave because fishing is their only livelihood.

“The system of barriers to protect the residential neighbourhood impede the river’s flow,” says Vincent, a leader of the fishing village community. “The water becomes stagnant, and this results in regular bouts of cholera.”

The Cité du Fleuve website states that a detailed hydrogeological study of the area was carried out before construction began, but when asked for comment on the fishermen's charges, no response was forthcoming.

In the meantime, the villagers protect themselves from flooding as best they can. However, according to Florence, a mother of four, this is not enough to prevent the rising tide from spreading the faeces and organic waste left to accumulate in the environment.

Besides placing sandbags around her house, she is also one of the few inhabitants to have built a latrine. It’s located on the edge of the river, right across from the Cité du Fleuve: the Kinshasa of tomorrow. 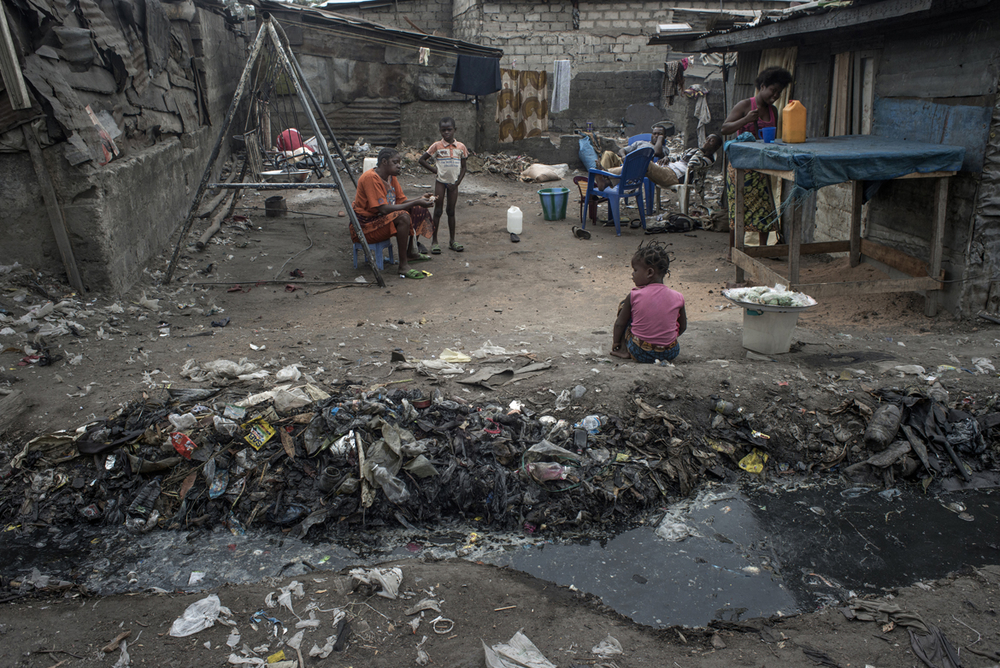