One year after Cyclone Nargis swept across southern Myanmar, the people of the Ayeyarwady Delta are rebuilding their lives, but thousands remain vulnerable as this year's monsoon rains approach.

After a slow start, most of the estimated 2.4 million people affected by the category 4 storm were provided with food, fresh water and shelter. The storm, which struck on 2 and 3 May last year, killed 140,000 people.

“The village looked like a cemetery. Everything was quiet. No one knew what to do," said 20-year-old Win Teingi, a teacher in Ye-Dwin-Gone village in the eastern delta. A quarter of the 1,000 inhabitants perished.

The first relief effort came from ordinary citizens who filled up cars and trucks with supplies in the former capital, Yangon, and drove them to the affected area.

However, international NGOs on the ground in Myanmar, such as Save the Children and Merlin, moved quickly, procuring relief items in-country and distributing them via national staff.

“Operating conditions were very difficult,” Andrew Kirkwood, head of Save the Children in Myanmar, told IRIN.

Not until the visit of UN Secretary-General Ban Ki-moon on 25 May were aid workers allowed unfettered access to the disaster area.

Next came the creation of the Tripartite Core Group (TCG), comprising the Myanmar government, the Association of Southeast Asian Nations (ASEAN) and the UN, which provided the framework for a major international response.

The TCG helped to build trust, streamlined the system for visas and travel clearance and provided a forum in which obstacles to the relief effort were quickly overcome.

It also provided a mechanism for a rapid assessment of people’s needs in the delta, so that aid could be targeted appropriately.

One year after Cyclone Nargis, more than 500,000 people - including 200,000 children - are still living in makeshift shelters which won't be able to withstand the monsoon rains, says Save the Children

Stacey Winston/ECHO
One year after Cyclone Nargis, more than 500,000 people - including 200,000 children - are still living in makeshift shelters which won't be able to withstand the monsoon rains, says Save the Children.

Across the cyclone-affected delta - approximately 23,500 sqkm or almost twice the size of Lebanon - hundreds of thousands of people were in desperate need of life-saving assistance.

Daw Pu Tin, a 70-year-old widow, and her nine-year-old granddaughter Hla Hla San, survived the first weeks after the cyclone by eating what they could scavenge – coconuts and rotting rice stocks.

Assistance arrived three weeks later, when the British NGO HelpAge International http://www.helpage.org/Home came to their village on the outskirts of the delta town of Kyaiklat with a mobile medical clinic.

Field workers distributed rice, salt and vegetable oil. Later, they repaired the roof of her house which had been torn off in the cyclone.

“Had it not been for the quick assistance of HelpAge, I would not have survived,” Daw Pu Tin told NGO staff.

Daw Pu Tin used to make a living breeding ducks and selling eggs to her neighbours. But she lost most of her ducks to the cyclone and her meagre pre-Nargis income of around $24 per month was reduced by more than half.

Such stories are common throughout the delta, where restoring people’s livelihoods will prove a key challenge and could take years.

At the same time, thousands of families do not have adequate shelter to withstand the monsoon rains likely to start next week. 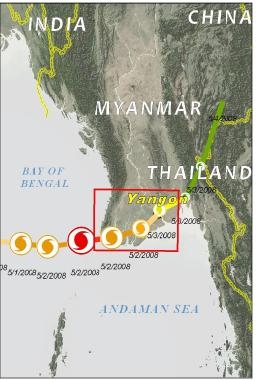 According to Save the Children on 30 April, more than 500,000 people – including 200,000 children – are still living in makeshift shelters which will not withstand the usual heavy rains.

“The gains made in quick, live-saving assistance are looking vulnerable to retreat in some parts - especially as the monsoon season approaches,” said Matt Maguire, the UK's Department for International Development (DFID) cyclone recovery coordinator in Myanmar.

The Post-Nargis Recovery and Preparedness Plan, a three-year strategic framework in guiding recovery efforts for victims of Nargis set out by the government and the international community, requires funding of close to $700 million over that period, but so far very little has been raised.

"If that money doesn't start coming in then people will take years to recover," Dan Collison, head of Save the Children's Nargis programme, told IRIN.

"We need to help people re-establish their livelihoods quickly - or they will remain dependent on relief assistance in the future, a situation that nobody wants."