Civilians in the oasis town of Ubari in southern Libya are trapped in a conflict that has cut them off from the outside world. Supplies and aid are almost non-existent, the hospital barely functions and the wounded often die of their injuries before they can get the assistance they need.

Karim al-Misry sits in one of the four rooms still operational in the once-busy and sprawling hospital. A year ago, it was reasonably well-equipped, served mainly by expatriate staff from India. Then the country’s civil war arrived. In November, the Indian staff fled as clashes reached the hospital and its maternity ward was shelled. A specialist surgeon from Egypt, Misry is now the hospital’s only senior doctor.

Roadblocks on the only stretch of road that connects Ubari to the northbound route up to Libya’s coast mean scant medical supplies ever reach the town.

“We have no general anaesthetic and no anaesthetist, so emergency operations can only be done with local anaesthetic and pain relief,” Misry says. “There is basically no way to save patients here, and many have died unnecessarily because they could not get the treatment they needed. They should still be alive now.”

There are shortages of the most basic items: oxygen cylinders stand empty; resourceful volunteers use ordinary masking tape and cut strips from the adhesive backing of surgical sheets to secure intravenous drips and dressings. There is no radiation film for X-rays, so the exact location of internal injuries cannot be determined, often reducing surgeries to partial guesswork.

For a town embroiled in conflict, this has left the population of more than 30,000 facing a medical crisis. But the predicament of the people of Ubari, like other besieged communities across Libya’s isolated and sparsely populated south, is unlikely to be a pressing concern in Tripoli. The country has descended into all-out conflict since the 2011 uprising that dislodged long-time ruler Muammar Gaddafi from power, with the help of a foreign military intervention.

The fighting in and around Ubari is predominantly between two indigenous Saharan tribes – the Tuareg and the Tebu. It is a microcosm of the wider conflict in Libya between rival governments and allied militia groups. The Tuareg are mostly aligned with the Tripoli government, installed a year ago as a rival to the internationally-recognised government in eastern Libya and which has the support of much the Tebu community.

Both sides accuse the other of recruiting fighters from neighbouring countries. Sporadic clashes break out in Ubari’s residential outskirts, up to the Tendi Mountain overlooking the town, as well as in the town itself, parts of which have become no-go areas for civilians.

Sniper shootings and random street-fighting have become commonplace, keeping residents – many of whom carry guns – in a constant state of alert. Even the hospital is not safe, with 24-year-old volunteer nurse Aisha Mounir Aliess saying she was almost caught in crossfire whilst putting out rubbish.

The main problem for those who are seriously wounded is Ubari’s extreme isolaton: the next nearest hospital lies 100km to the north over rough desert terrain in the town of Idiri. It too has only limited facilities. From there, patients are stabilised and transferred to the capital. Urgent cases are taken through the Sharara oilfield by plane. The field has been dormant since November, but industry flights meant to transport oil workers and supplies are now intermittently used to help civilians. At least 15 injured men have died waiting for a plane or while being transported through the desert.

More than 500 Tuareg families have fled, according to the Ubari Crisis Committee, a grouping of elders and civil society representatives. Civilians are among the 200 Tuareg killed so far in the conflict, according to an Ubari military commander, Youssef Edwell.

Most Tebu families have evacuated, according to a local journalist, who says Tebu casualties number 76 dead and more than 80 injured. The minority in Ubari, the Tebu prefer seeking treatment in the Tebu-majority town of Murzuq, some 130 km to the southeast.

Even basic foodstuffs like milk and nappies for children are lacking. Short of cash after months of conflict, poorer families have resorted to buying foodstuffs on credit.

Cases of typhoid are increasing, with drinking water supplies interrupted and damaged by fighting, forcing families to find other sources, some of which are polluted. Cases of tuberculosis are also on the rise and, with no vaccines available for children – including against polio and mumps – the threat of further disease looms.

“The situation is just getting worse and worse,” Misry says, shaking his head. With the town’s banks closed, he has not been paid for more than a year but says he cannot return to his family in Egypt. “How could I leave?” he asks rhetorically, gesturing around the humble operating room, with its volunteer staff who view him as one of the most valuable members of the community – the only person who could save an injured man or a woman in labour with complications. But saving lives is becoming harder and harder.

A Libyan man receives medication from the only pharmacy in Ubari, a town in southern Libya 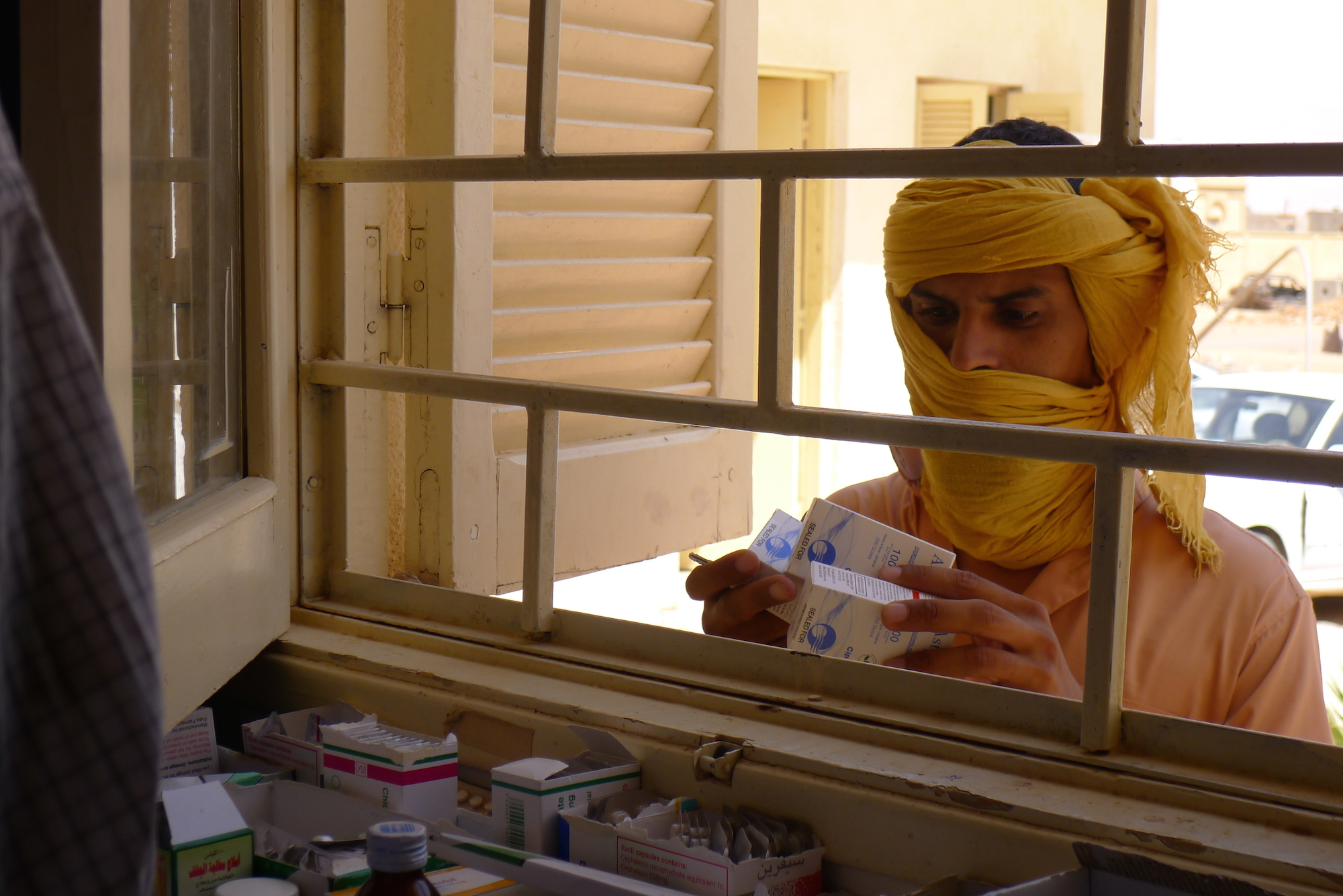 Despite delegations of tribal elders visiting both governments to explain the desperate situation, neither has provided help, according to Crisis Committee member Mustafa Baba Ahmed. Modest amounts of humanitarian aid have been sent a few times by NGOs via the oilfield flights, but this hasn’t covered the needs of the population, he explains, adding that the town’s medical crisis has now reached a critical point.

Surgical technician Abdusalem Abdullah, who has worked at the hospital since 1985, explains that a lack of items for stemming internal haemorrhaging and stitching up either internal or external wounds makes surgeries high-risk. He has the look of a desperate man. It is technically impossible to do any operations at the hospital but they continue to patch up emergency cases, he says. There is no other option.

There are two other modest medical facilities now functioning in Ubari: a makeshift field hospital and, on the outskirts, the town’s only pharmacy. It is running dangerously low on stocks, including antibiotics and medication for treating high blood pressure, as well as anti-venom medicine for scorpion stings, common at the height of summer in Libya’s desert south. Three children died from stings during the recent Holy month of Ramadan alone, according to Lala Wanni, a volunteer who helps run the pharmacy and field hospital.

The field hospital is in a converted school – unused since the conflict brought with it an end to regular tuition. Three classrooms are now home to mismatched rusty beds, some with stained mattresses, others just bare springs. Injured fighters are put in the only room with air conditioning, which does little but take the edge off the searing desert heat. In the school’s former hall, civilians seek treatment. Emaciated young Mohamed, suffering from heat exhaustion and malnourishment, is hooked up to a drip. This is a common sight, Wanni explains. Both hospitals send non-critical patients home as swiftly as possible, since they can provide little in the way of aftercare.

In the main hospital, Aliess, the nurse, leads a sad tour down the deserted corridors, showing IRIN the different departments, all now closed. “In 2011, everything worked okay here, but its capacity has just shrunk and shrunk over the last four years, especially the last year,” she explains.

Two Toyota pick-up trucks full of military personnel pull up outside the hospital, to check on security after reports of a sniper in the area. “People say that Ubari is an abandoned town, but the reality is different,” says Aliess, pausing at the entrance. “Many civilians still live here and we keep this hospital working as best we can. But we feel that everyone has forgotten about us.”