Gaza’s doctors and nurses – working around the clock to help people wounded and killed by Israel’s bombing and shelling – say they are hampered by outdated equipment and a lack of supplies, after already struggling to cope with a devastating wave of COVID-19.

Multiple wars and a blockade from Israel and Egypt that heavily restricts the entry of goods have led to what UN experts describe as a “long-term health crisis” inside Gaza, which has been run by Hamas since 2007. Equipment is often outdated or in short supply – problems compounded by the fact that Gaza is running dangerously low on both electricity and the fuel needed for pumping water and running generators.

Still, medical professionals like Fadi Afaneh, an emergency responder with a Palestinian Ministry of Health-connected ambulance service in Gaza, are doing everything they can to help the more than 1,500 people officials say have been injured.

Arriving at collapsed buildings in his 10-year-old ambulance, he does his best to evacuate victims, dead or alive. “I have lived through three wars,” the 39-year-old, who hasn’t slept more than a few hours a night for days, tells The New Humanitarian. “I’ve never seen scenes as ugly as what I’ve seen in this war right now.”

Officials in Gaza, which is home to around two million people, say 219 Palestinians have been killed – many of them reportedly civilians – since the night of 10 May, when Israel began bombing the occupied territory in response to rocket fire from Hamas and other groups. Twelve people have been killed inside Israel.

The escalation in violence, the worst since the 2014 Gaza war, followed weeks of protests over restrictions on prayer during the Muslim holy month of Ramadan in Jerusalem, as well as the planned expulsions of Palestinian families from a neighbourhood in the east of the city. Most of the international community considers East Jerusalem occupied, alongside the West Bank and Gaza, although Israel considers the city united and its capital.

It also comes after a late March and April surge in COVID-19 cases, which saw some 1,000 new cases a day in Gaza alone and put its hospitals under serious strain.

‘We work with the resources we have’ 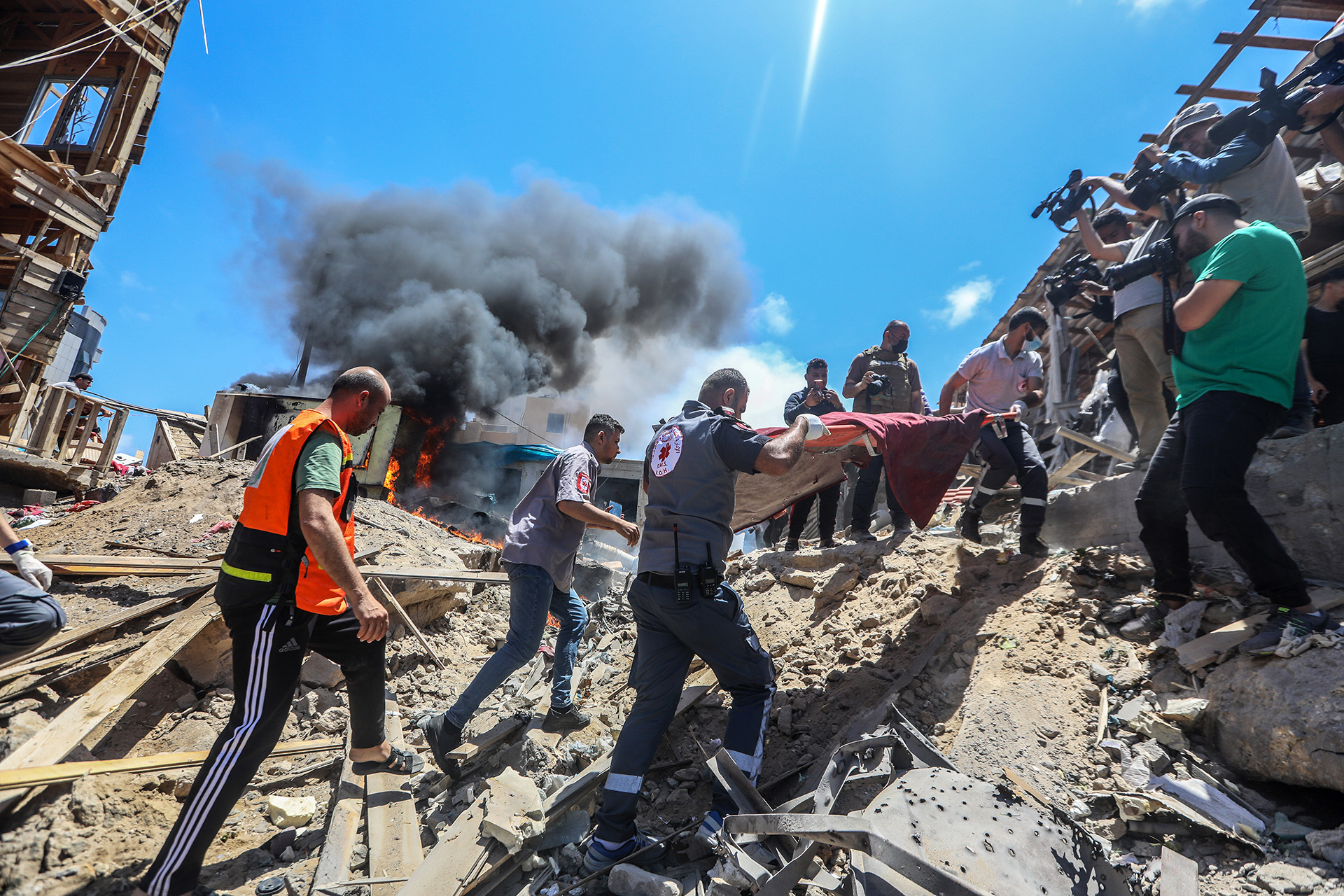 Afaneh and his colleagues evacuate a body from the site of an airstrike in Gaza. In addition to an aging fleet of ambulances, he says first responders don’t have up-to-date search and rescue equipment to deal efficiently with the swiftly rising numbers of casualties.

“The challenge we face when trying to rescue people is a lack of resources,” he explains. “We work with the resources we have, but don’t have devices or equipment enough to pull out the casualties from under the rubble.”

‘We are operating day and night’ 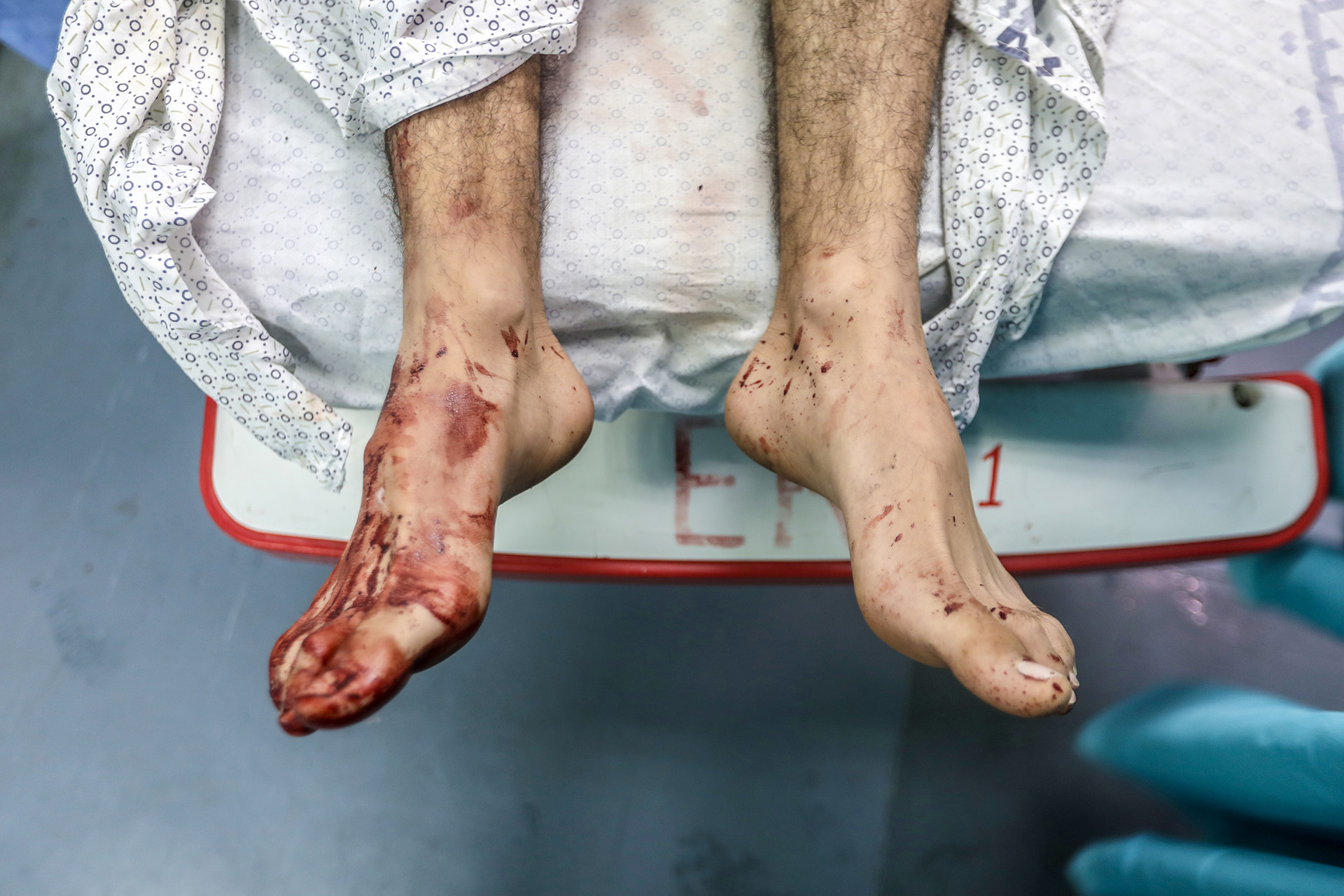 “We are operating day and night, and thank God our teams have the expertise to deal with this,” he says. “But we suffer from a severe shortage of medical supplies and equipment, which have been worn out during the years of this long siege.” 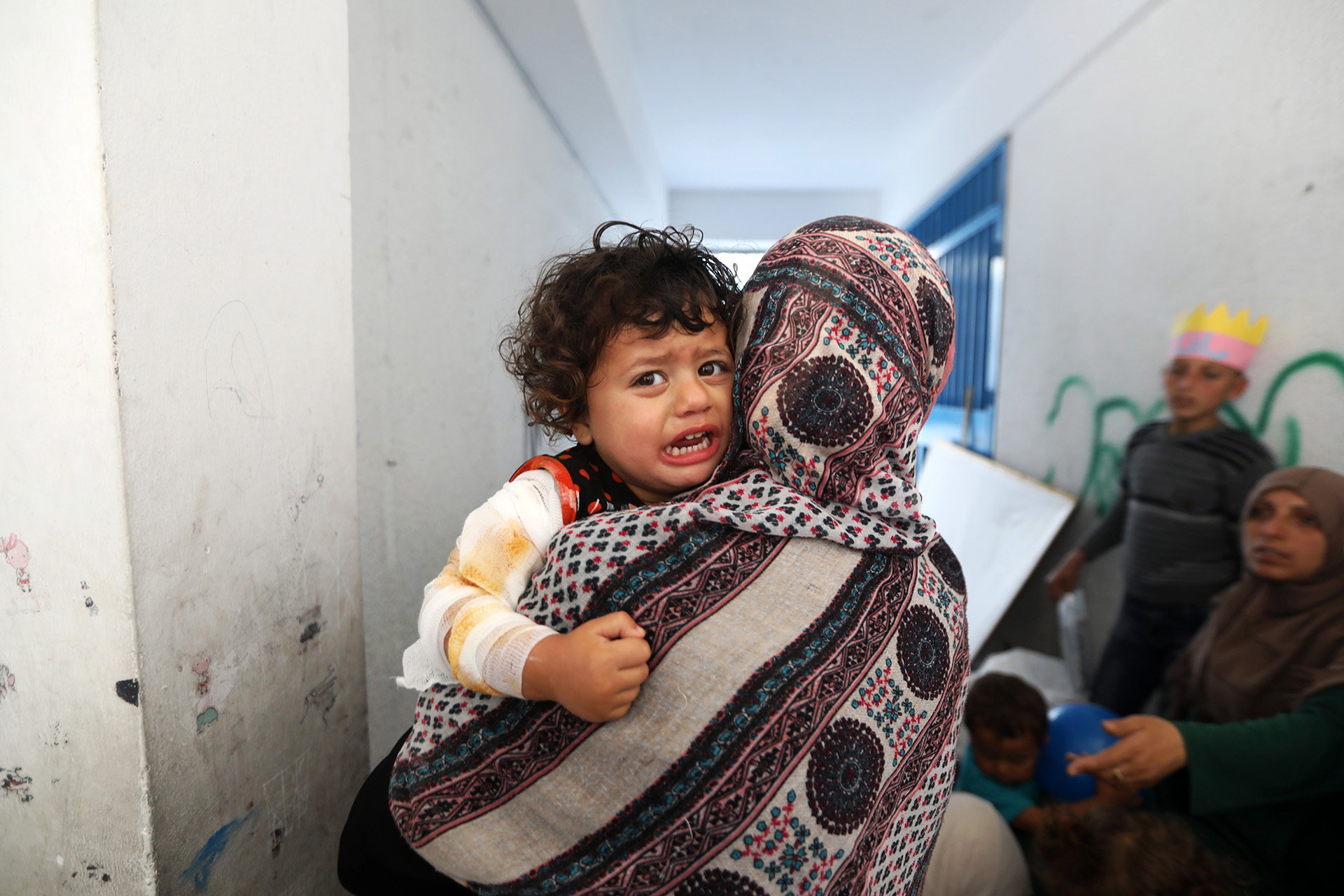 The UN says 72,000 Palestinians have fled their homes since the fighting began, including this family, who have taken shelter in a school run by UNRWA, the UN agency for Palestine refugees.

UNRWA says around 47,000 people are staying in 58 schools across Gaza, some of which have reportedly been damaged in airstrikes and shelling.

Aid groups, including UNRWA, have said they are having trouble reaching people who need assistance because of the ongoing violence and restrictions on entering and exiting Gaza. A crossing that had been temporary open for humanitarian aid was closed on Tuesday after Israel said Hamas fired rockets at the border. 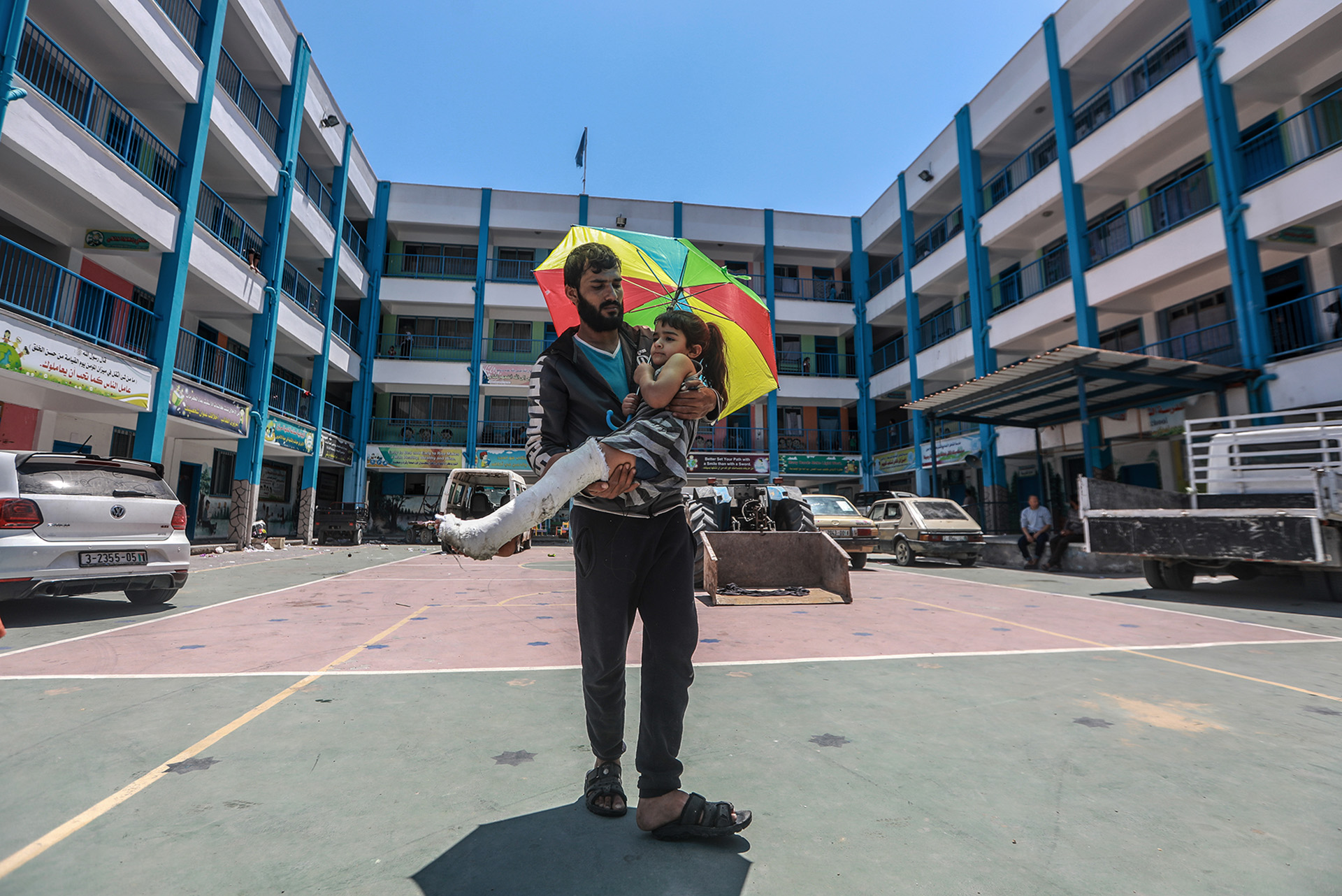 A father carries his daughter after she received treatment for an injury sustained while the family fled their Gaza home. While it is too early to estimate the full extent of the damage, homes and civilian infrastructure have been damaged and destroyed. In one part of Gaza, sewage has been flowing in the streets.

Medical facilities have also been damaged, including Gaza’s sole COVID-19 testing facility. Médecins Sans Frontières said a trauma and burns care clinic it runs was so severely affected that it was forced to close. “The horrendous attacks on civilians and civilian infrastructure that we are witnessing in Gaza are inexcusable and intolerable,” said a statement from Ely Sok, MSF’s head of mission in the Occupied Palestinian Territories.

Israel says it is targeting Hamas and militant groups like Islamic Jihad, in response to the barrages of rocket fire that have been sent into Israel. It says that militants from the groups have positioned themselves amongst Gaza’s civilians, using them as human shields. 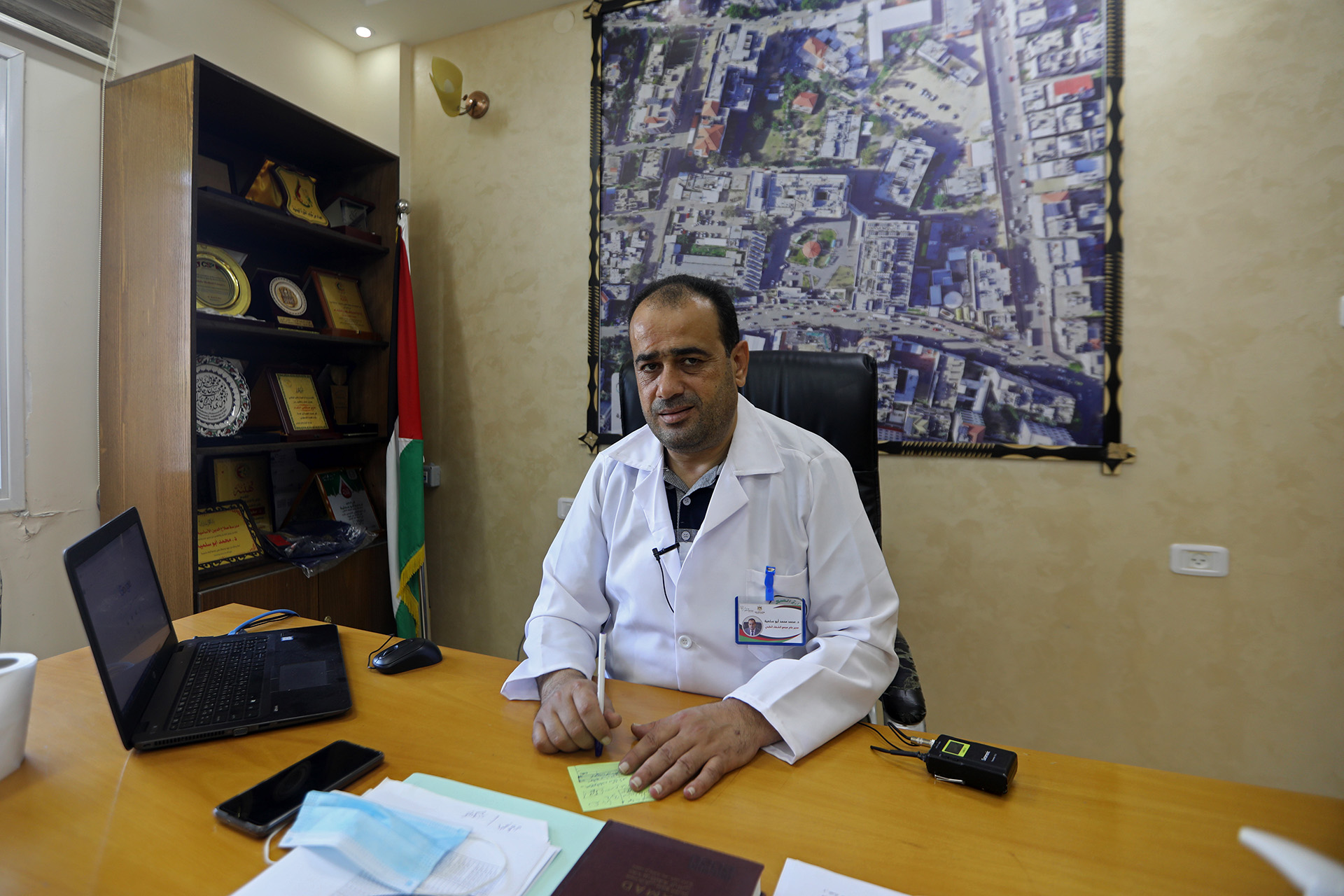 Dr Mohammed Abu Silmiyah, 50, director of the Dar al-Shifa hospital, is quick to point out that the fighting comes in the midst of not only a long blockade but also the pandemic – both of which have “exhausted the health sector” in Gaza. Hospitals now have to treat coronavirus cases, victims of the bombing and shelling, and other patients that need help, all at once.

Windows at Dar al-Shifa have been shattered from a nearby bombing that Dr Abu Silmiyah says could further traumatise already scared patients.

Even as they work, the staff at Dar al-Shifa are dealing with their own personal tragedies. Dr Abu Silmiyah says one of the hospital’s doctors, who had been treating COVID-19 patients, was killed this week along with his father, mother, and two sons. “It was a catastrophe for all the staff,” he says. “Everyone was crying because of this loss.”

Dr Abu Silmiyah says his hospital needs just about everything, with equipment for some specialties – he mentions orthopaedics, brain surgery, and heart surgery among others – either unavailable or in such short supply that it can only be used for lifesaving operations. Some equipment is just old, and is stretched to its limits.

“I appeal to everyone: Stop this aggression, and provide Gaza with medical supplies, medication, intensive care beds, and surgical equipment,” he says. “We hope this does not continue, because if it does, and we have to keep admitting such a large number of wounded people, we will be in a very difficult situation, God forbid.”

‘I honestly cannot describe it’ 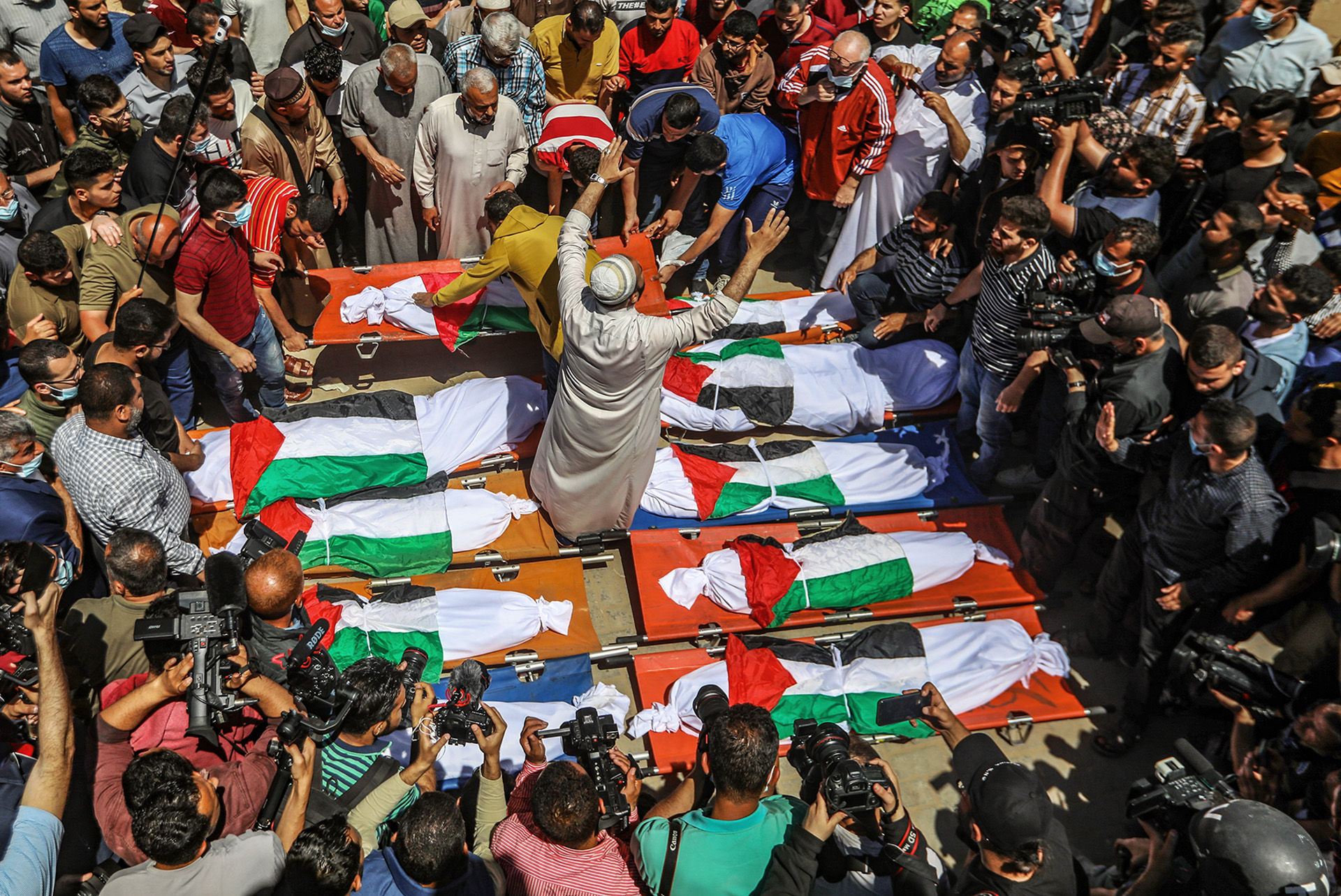 The funeral of 10 members of the Abu Hattab family, including eight children, who medics said were killed when their home in the al-Shati refugee camp, in northern Gaza, collapsed after an airstrike.

Afaneh says what he saw in al-Shati was so bad that “I honestly cannot describe [it]”. 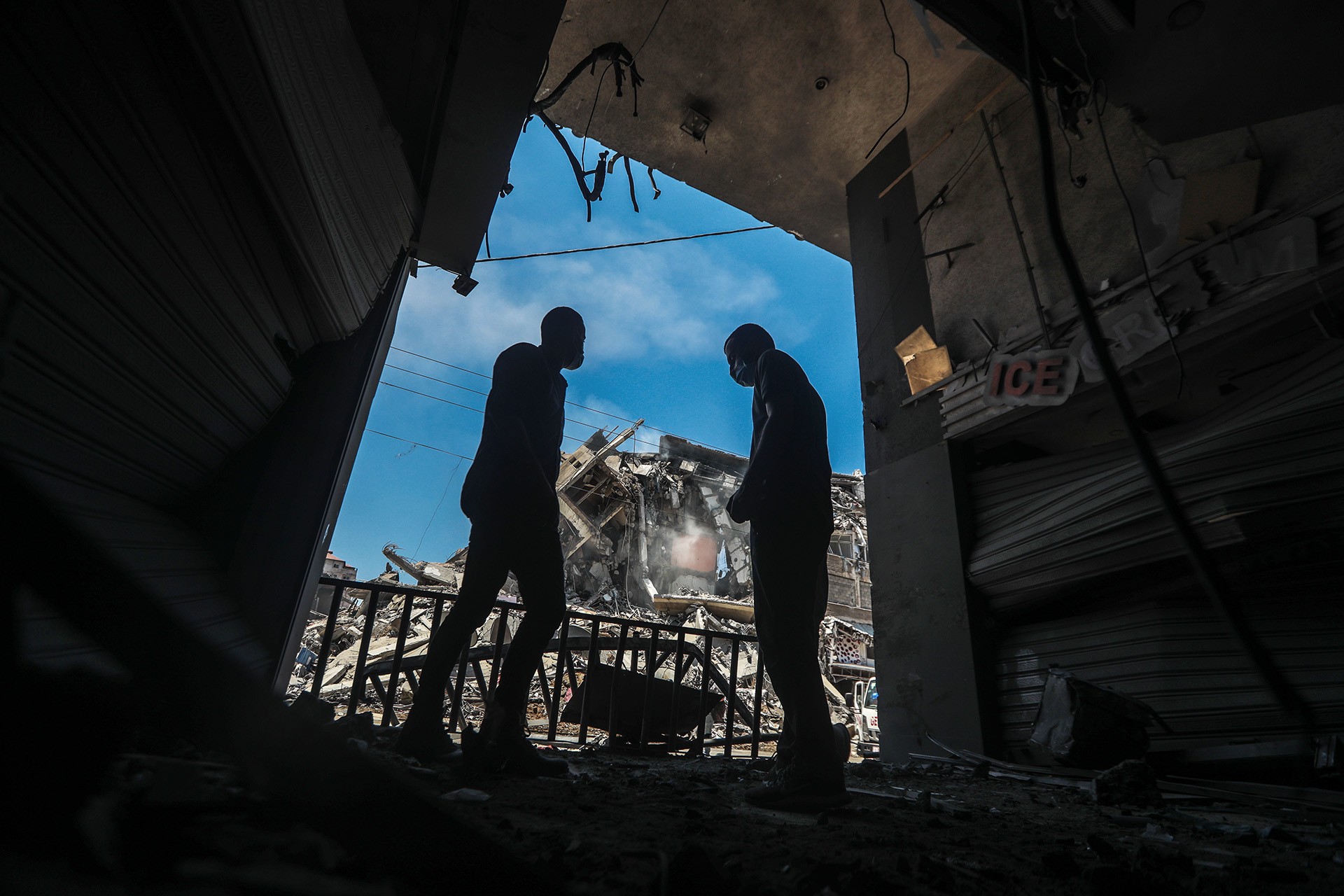 Gaza’s civilians, who are only able to leave the territory or work across its borders if they can obtain permits, are often forced to rely on international aid after war destroys their homes, businesses, or workplaces. The unemployment rate hovered at around 50 percent at the end of 2020, and by some measures the “extreme poverty” rate is at 80 percent.

‘Things will not return to normal’ 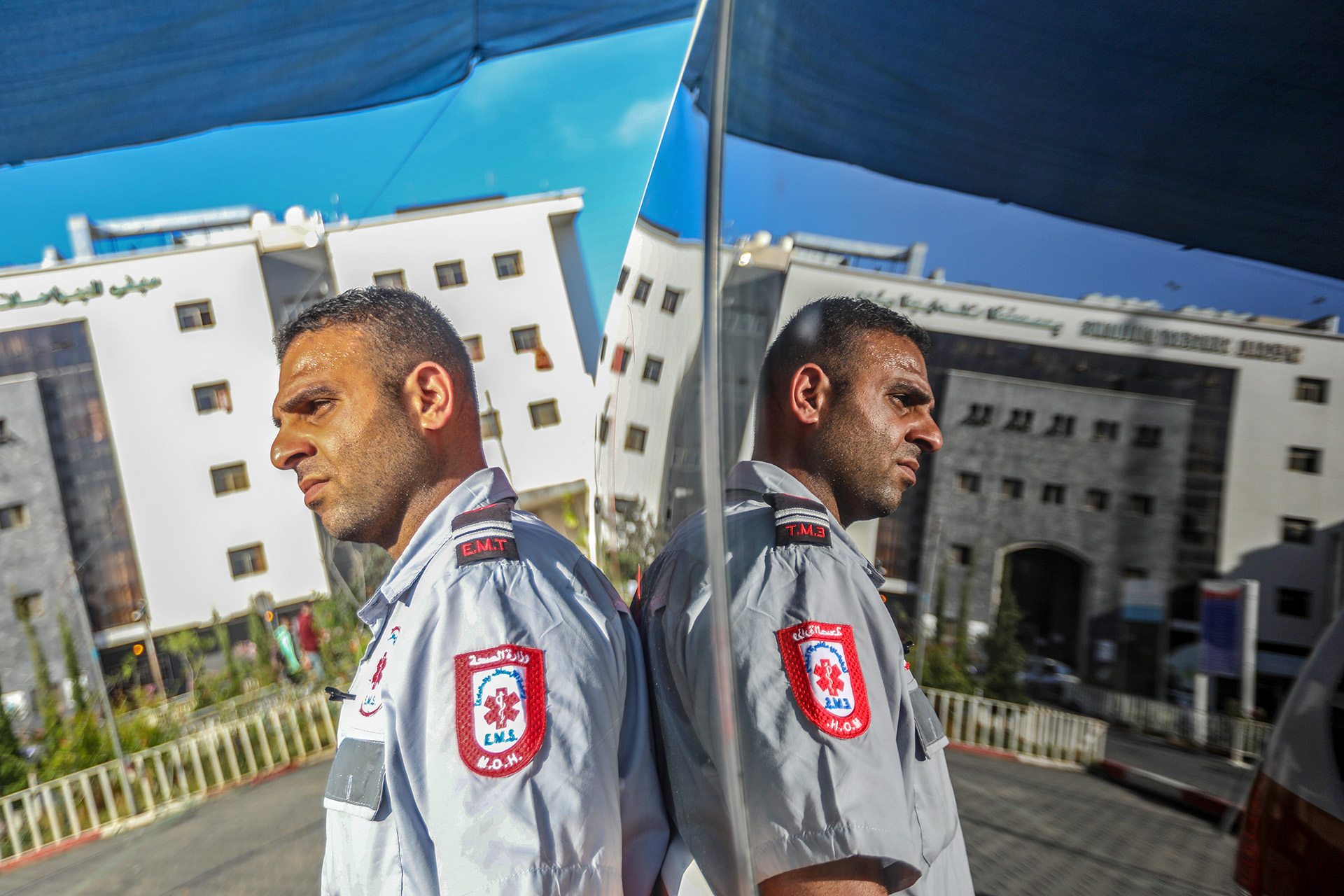 Efforts to negotiate a ceasefire are underway, but with rockets and bombs still falling and the casualty count growing, aid groups and people like Afaneh are worried not only about the immediate devastation they are facing, but also about the longer-term impacts.

“The bombardment has side-effects on our people, particularly children… the fear is clear on their faces,” he says. “Things will not return back to normal once the war or the aggression ends. We will keep suffering for years from the repercussions.”

With additional reporting by Annie Slemrod.