Facing the worst drought in decades, cattle farmers in India’s Maharashtra State are left with little choice but to flee their parched villages with their animals for an NGO-run displacement camp where livestock are fed and watered.

“Cattle camps”, such as the one photojournalist Maria de la Guardia visited in April, are a sign of the life-altering changes long-term drought is forcing onto rural families in India. Most of the farmers are grandparents whose adult children have abandoned farming, pursuing a living in the slums of Mumbai.

Some 4,000 farmers from 300 drought-hit villages in southern Maharashtra were gathered at the cattle camp where de la Guardia spent time. It is run by the Mann Deshi Foundation, a local organisation that helps rural women.

In recent years, hundreds of these cattle camps have opened on an emergency basis during times of drought.

But farmers here say this is the worst drought since 1972. And, with almost no rainfall in months, the Mann Deshi camp, by far the largest in the area, opened in January – its earliest start date ever.

As de la Guardia’s images show, families live in makeshift tents, working to preserve the last of their livestock and wondering if this is the end of the line for their livelihoods as farmers.

“This year there is no rain, not since last year,” says 63-year-old Nagardi, whose family has raised cattle for generations. “There are no fields for the cattle, no water even for us to drink.”

Drought has hit at least eight Indian states including Maharashtra, which declared a drought in two thirds of its districts in November. With traditional sources like wells, rivers, and even lakes running dry, authorities have deployed tankers to truck in water to dry communities.

“Our village now is just barren land and dust.”

Maharashtra is India’s wealthiest state, yet there is a deep economic disparity between its commercial centre, Mumbai, and its rural regions.

Groups that work with rural communities say the long-term consequences of drought include permanent migration from rural to urban areas, depletion of groundwater and deterioration of farmland, a decline in agricultural production and a surge in food and milk prices, and even higher rates of suicide as farmers struggle to repay mounting debt.

Some of these fears are echoed by farmers at the Mann Deshi cattle camp. The NGO says it costs $12,000 each day to operate the camp, but it doesn’t have enough funding to stay open until the start of the monsoon rains, which typically arrive in June or July.

Families here worry they’ll have to sell their cattle at a significant loss – and ultimately leave their empty villages for good to migrate in search of food, water, and jobs.

“Our village now is just barren land and dust,” says Tukram Khandar, a grandfather who brought his cattle to the camp.

A makeshift camp for both cattle and humans 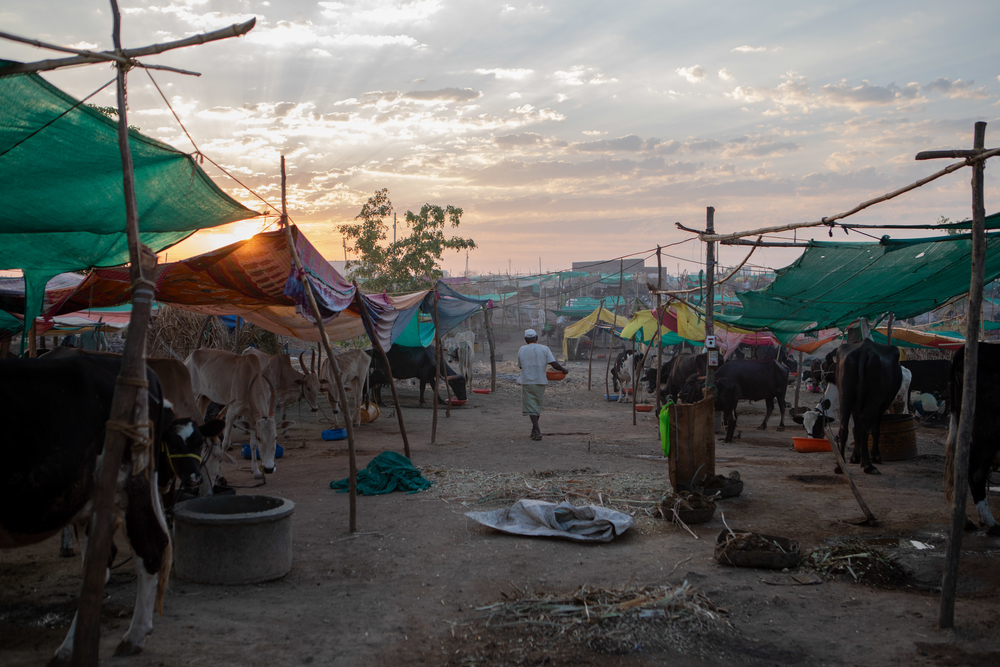 Green netting sprawls across partially shaded cattle in the Mann Deshi camp, while smoke from outdoor cooking fires wafts over tents that often house multiple generations of families. More than 4,000 people and 10,000 head of livestock live in the camp.

The makeshift but organised nature of the settlement resembles a camp for internally displaced people. Water is trucked in and fodder is distributed for the animals. Each household receives a solar lamp, though families are responsible for their own food and shelter. Sanitation facilities and a veterinarian are also available. Each week, 15 to 20 people – along with 60 cows – show up asking for refuge, according to NGO officials. 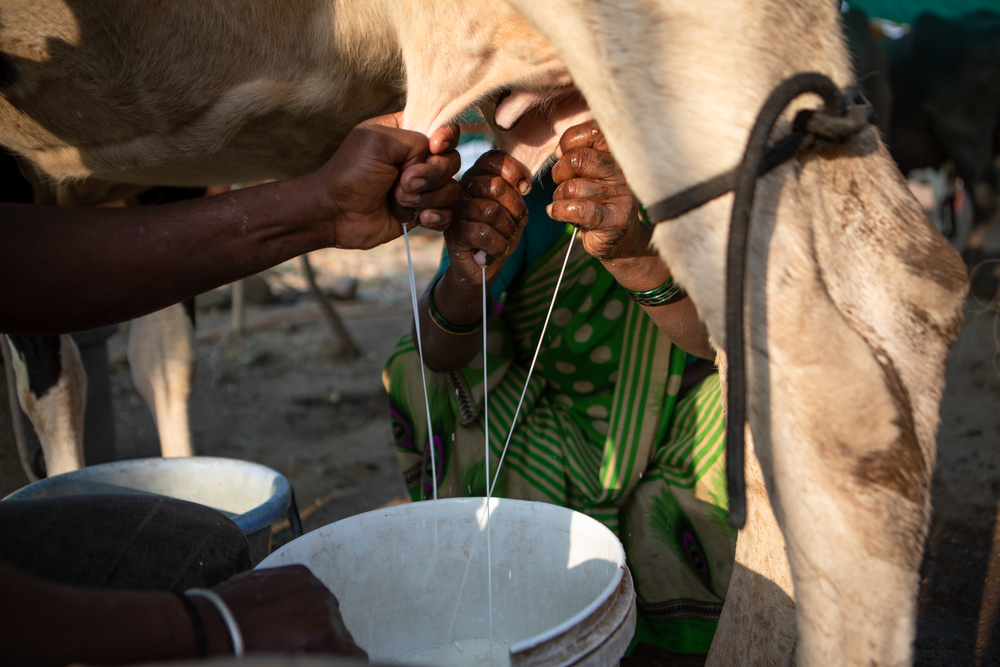 Cows hold a special significance for many farmers here. Cows are considered sacred in Hinduism – the religion practised by most of the farmers – and they are also crucial to the families’ livelihoods.

“The cows are family members,” says Khandar, as his son and sister milk one of the family’s dairy cows.

“They feed our children as they grow. And without them, our source of income stops.”

His eyes fill with tears as he recalls a pregnant cow that died shortly after arriving at the camp in January, her stomach filled with dust: “I did not eat for more than four days.”

Farmers in the camp are surviving on an average of 10,000 rupees each month, or about $144, earned through the sale of cow’s milk. These earnings are just enough to meet their daily needs. 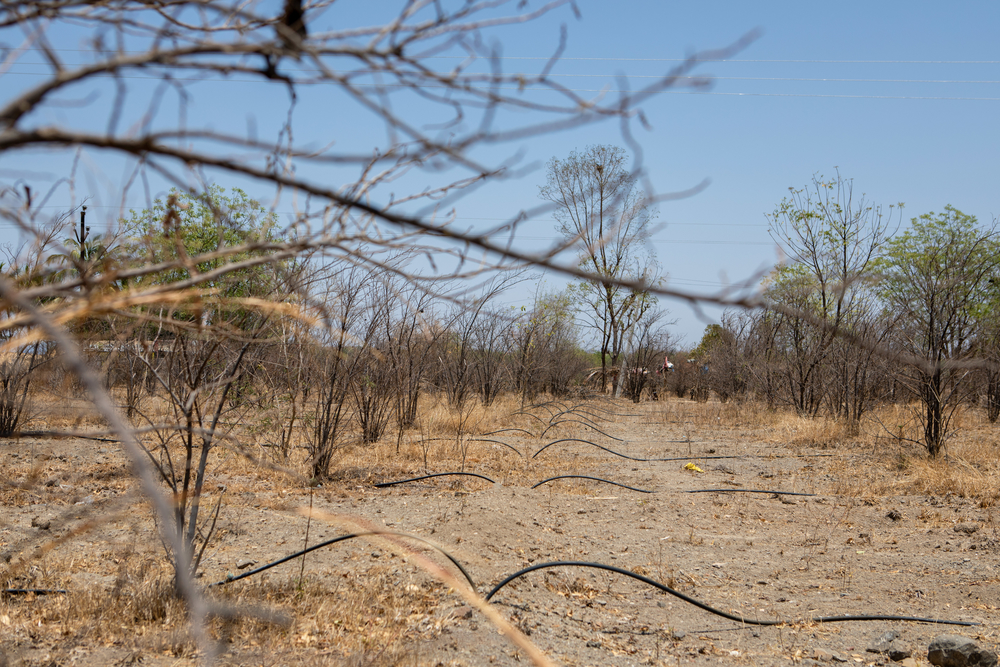 What were once pomegranate and custard apple patches are now barren fields on the outskirts of abandoned villages. Failed crops are compounding the drought’s impacts on cattle farmers, who struggle to provide for their families and their livestock. More than 70 percent of Maharashtra’s districts are facing water scarcity and crop failure and some 8.2 million farmers are affected, according to ECHO, the European Union’s aid coordination arm. 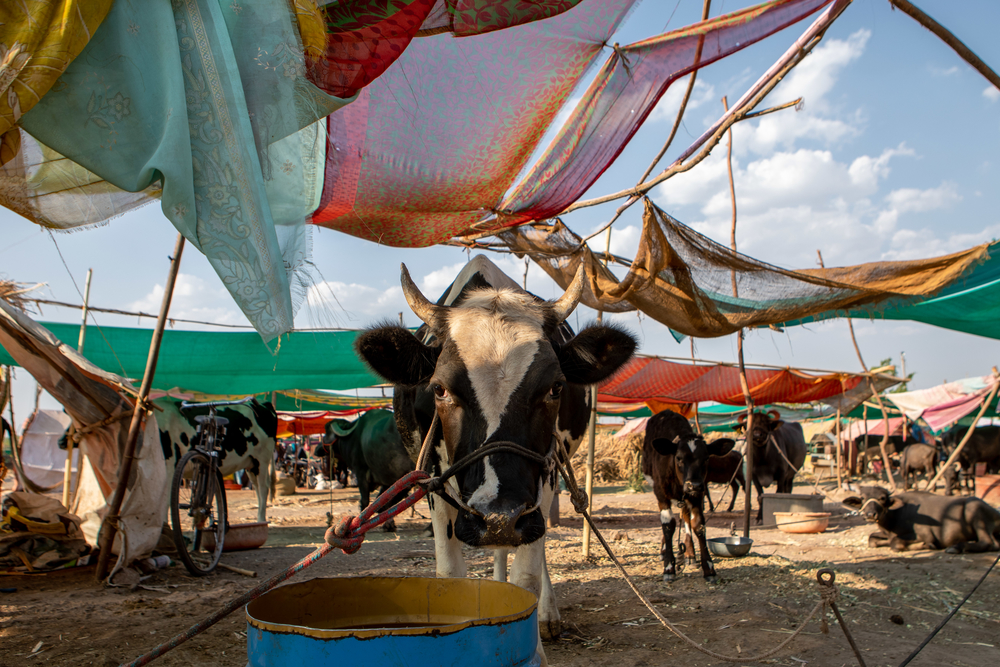 Maharashtra is the seventh-largest dairy producer in the country, but many of the state’s cattle farmers have taken a financial hit in recent years. In 2015, Maharashtra prohibited the slaughter of cows, bulls, and bullocks – disrupting the cattle trade. Now, the animals are worth a fraction of their former value.

Farmers who still own beef cattle speak in hushed tones about what they’ll do if the drought forces them to offload their livestock. Some say they may have no option but to sell to black market butchers – risking jail time and a fine. 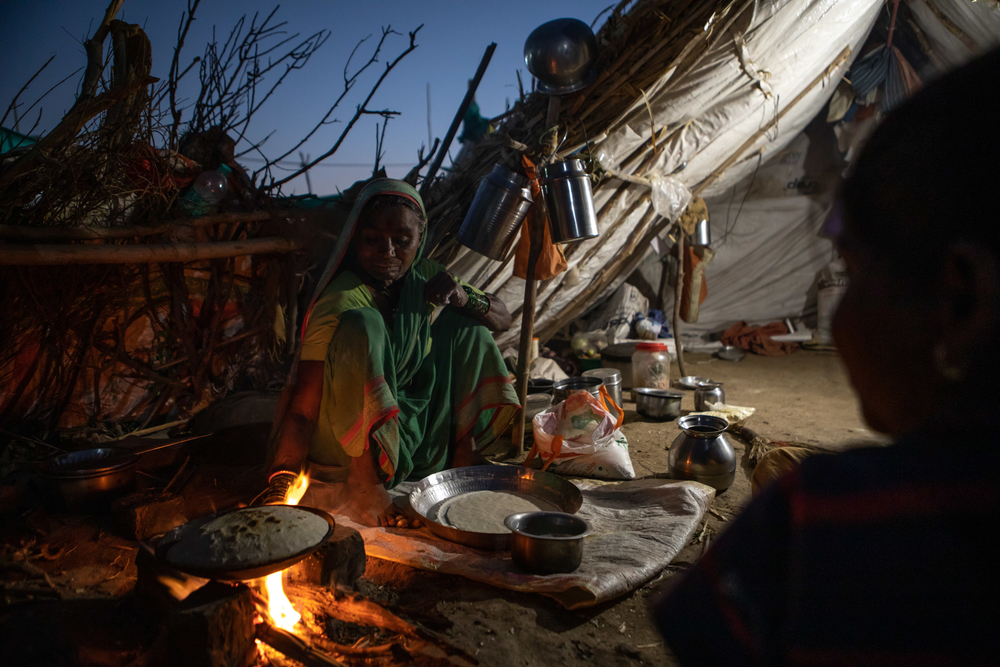 A woman cooks the evening meal over an open flame outside her tent. Many families here forgo proper nutrition despite long days of physically intensive work in temperatures that soar past 40C. Instead of more nutritious food, diets largely consist of starch and carbohydrates. 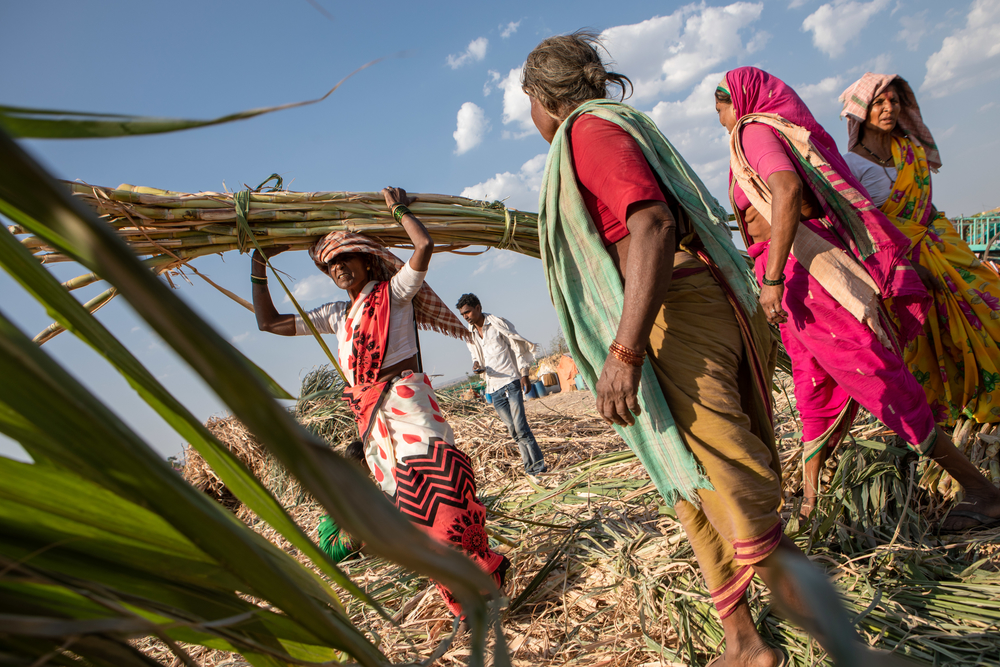 Nagardi works among a sea of sugarcane to collect fodder for her cows. Most of the farmers have adult children who have moved to the slums of cities like Mumbai, fracturing families that have farmed for generations.

“This is the last generation of our family to be farmers,” Nagardi says. “We do not want our children to follow our same path and struggles.” 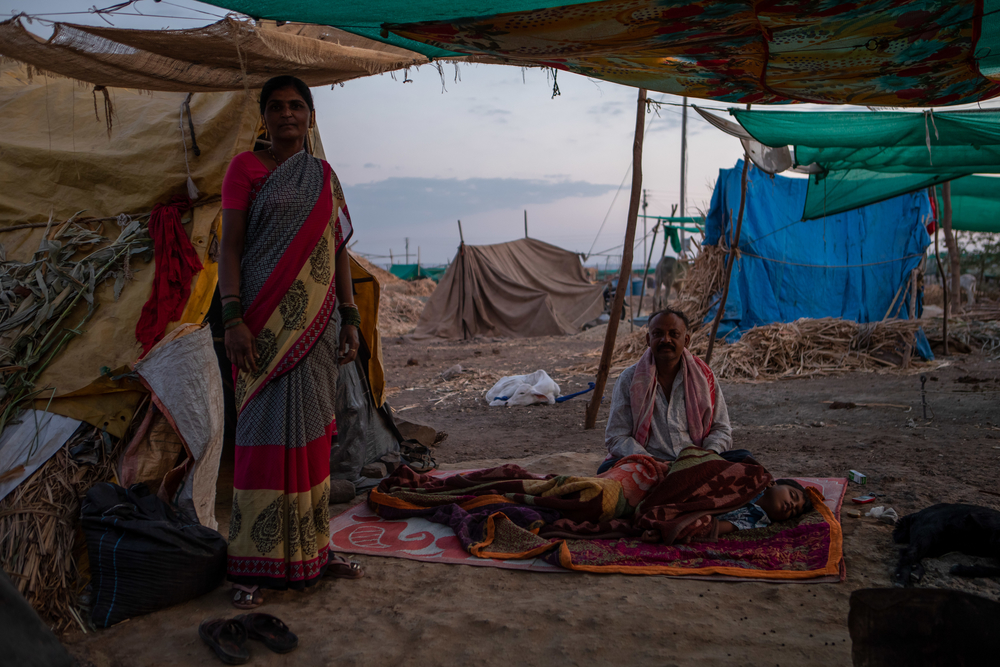 As day breaks, Nagardi’s neighbours begin to wake. The daily worries and fears across the community are the same: what happens if the camp closes before the rains set in?

In recent years, many families are increasingly travelling hundreds of kilometres to find temporary jobs in sugarcane factories or in construction. The prolonged drought is turning once-seasonal migration into a permanent reality.

Owning livestock keeps some families tethered to their unproductive land. But for those forced to sell everything, finding a new living in the slums of Mumbai is the likely end point.

For Nagardi, planning for the future is about survival. “I will go wherever there is water,” she says.

(TOP PHOTO: A woman in Mann Deshi cattle camp shields her face from winds that whip up pieces of sugarcane during a fodder distribution.)