The destruction Hurricane Maria unleashed on the tiny Caribbean island of Dominica on the 19th of September, 2017 was absolute. Survivor Ivonne Salbon recalls the wind roaring like a “howling demon at the end of the world”.

A month later, the first seedlings of felled trees are once again sprouting, but it will be years if not decades before island life returns to normal.

“Dominicans are a people born from resistance,” says Salbon, clutching a cutlass to control the growth around her sprouting banana garden. “We faced down every adversity in our history; we can come out from under this nightmare too.” 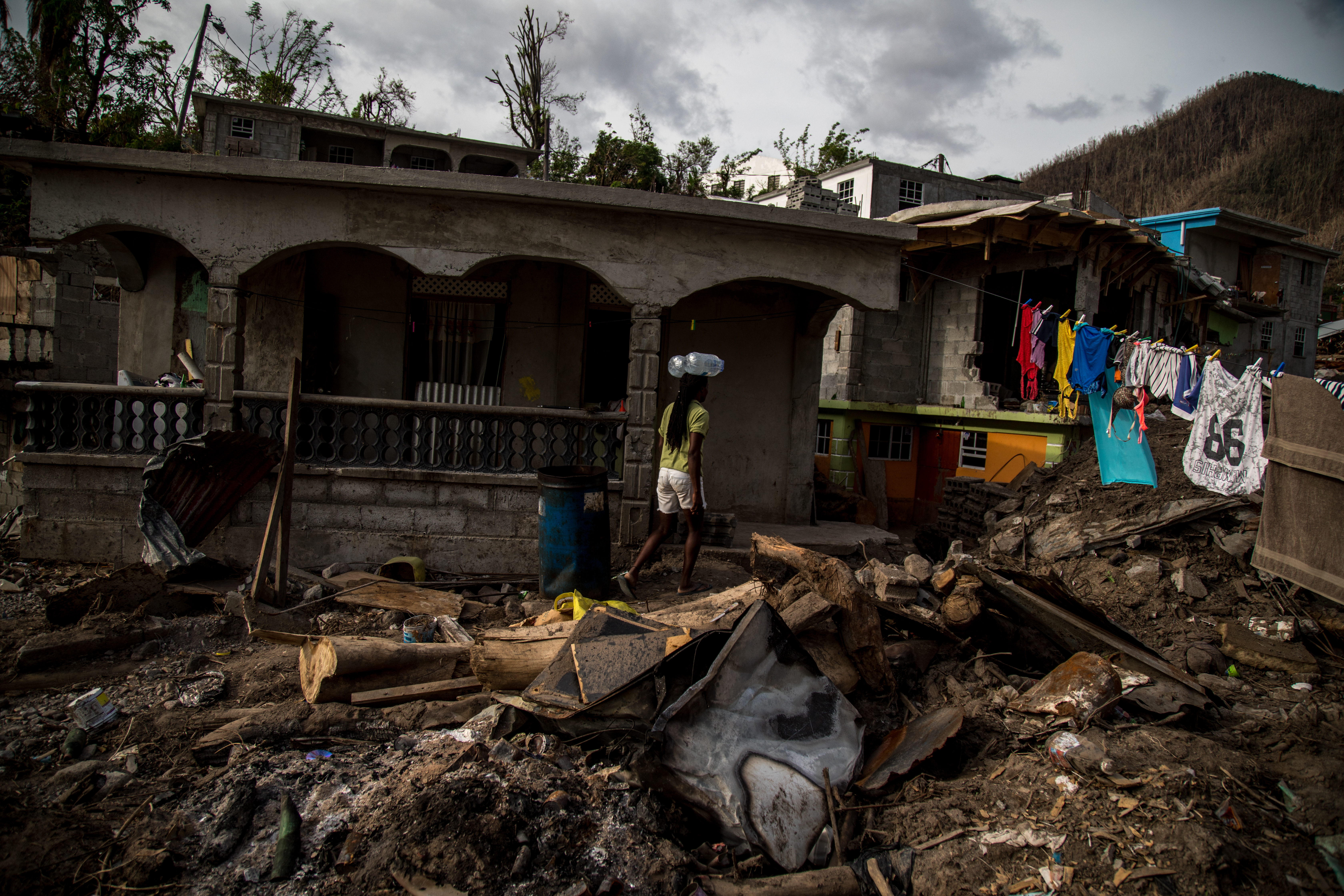 A woman walks over the wreckage of the landslide that decimated the village of Pointe Michel. A month after the hurricane, there is no access to potable water for the vast majority of Dominicans. 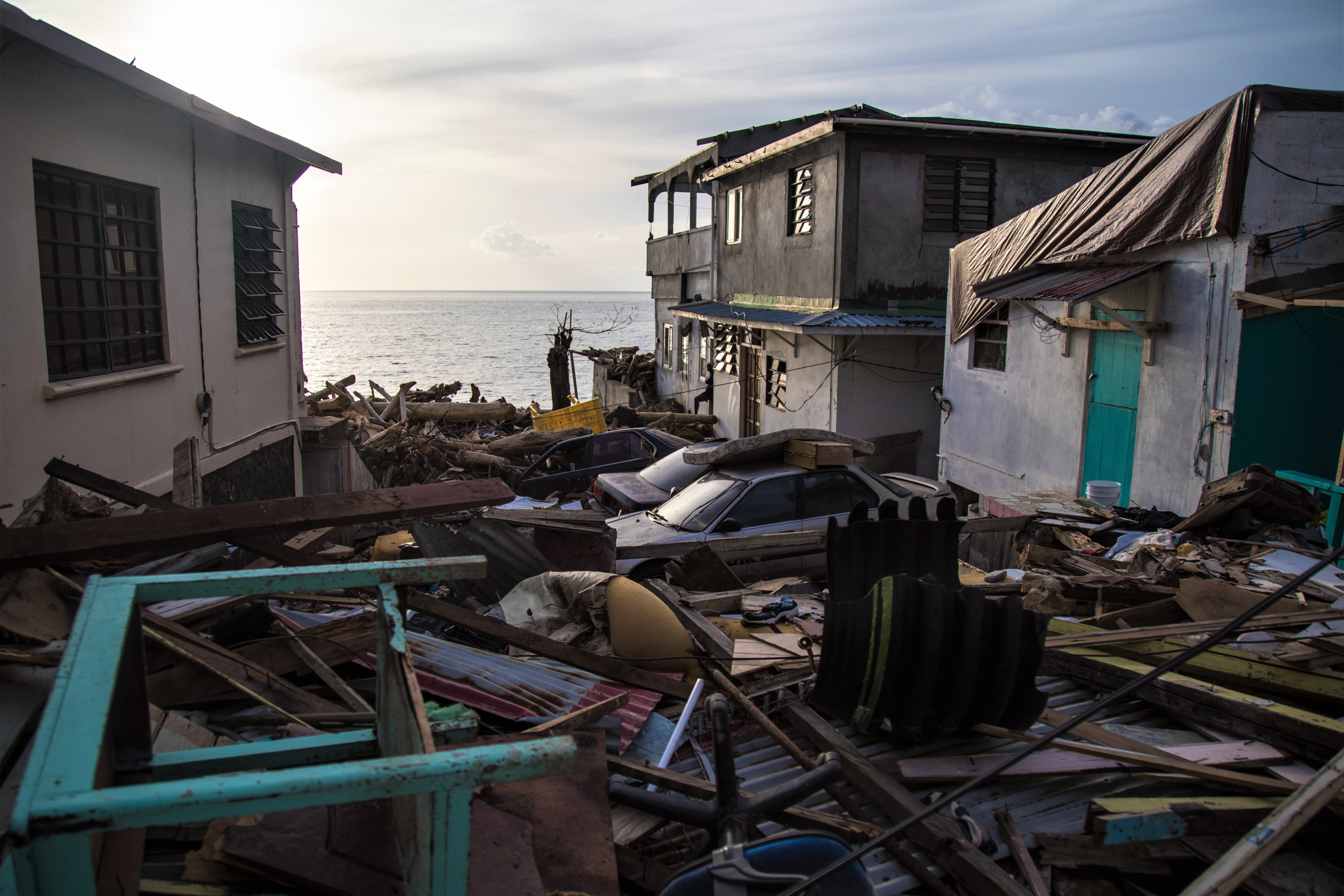 The destruction is most severe in the southern and eastern quarters of the country where Maria made landfall as a Category 5 hurricane with sustatined winds of 160-175 mph (260-280 kph). Government-led efforts to clear the debris have been overwhelmed by the scale of the catastrophe. 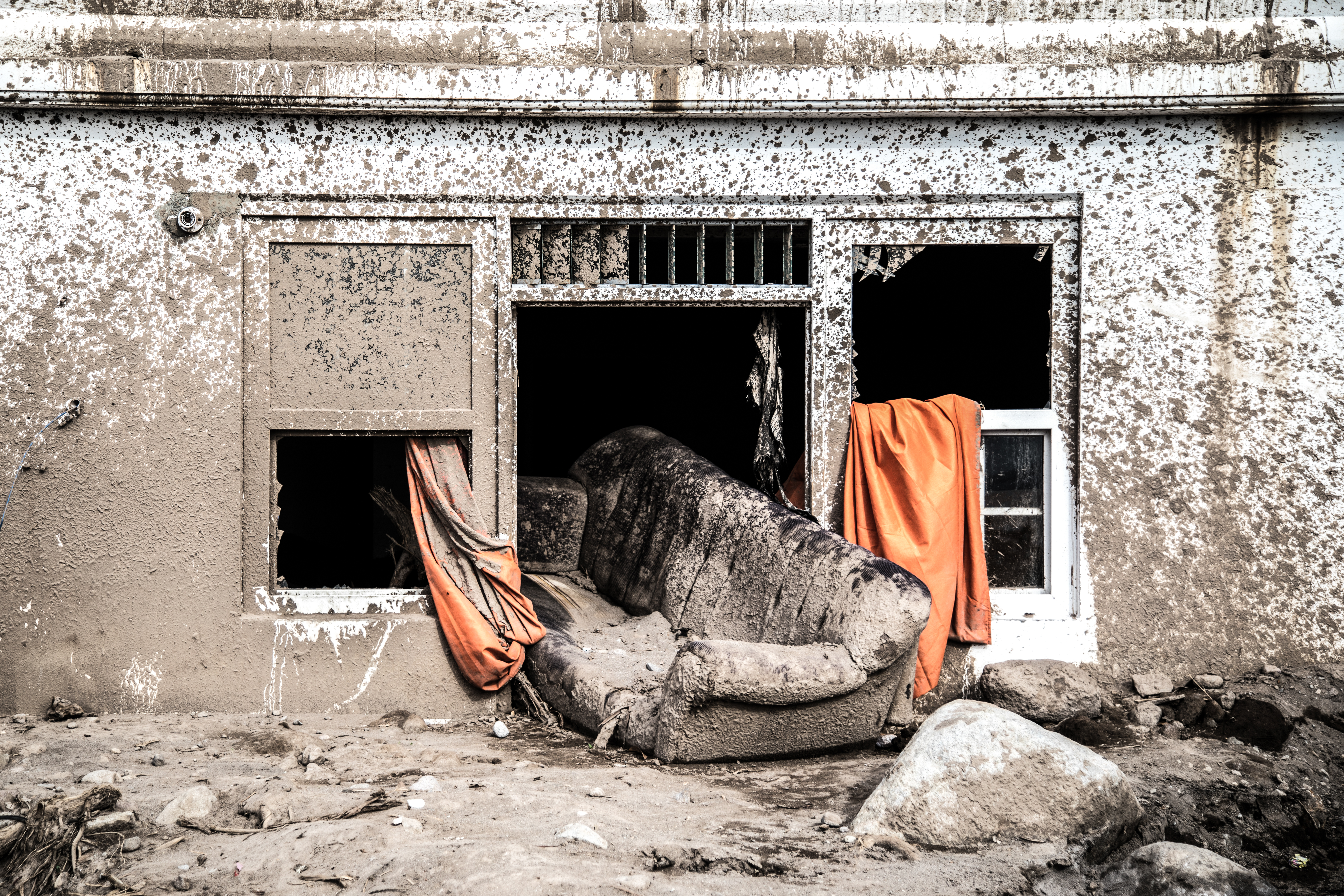 Houses in the New Town area of the capital, Roseau, saw extensive flooding damage but were also hit by landslides due to the unstable, mountainous terrain above. 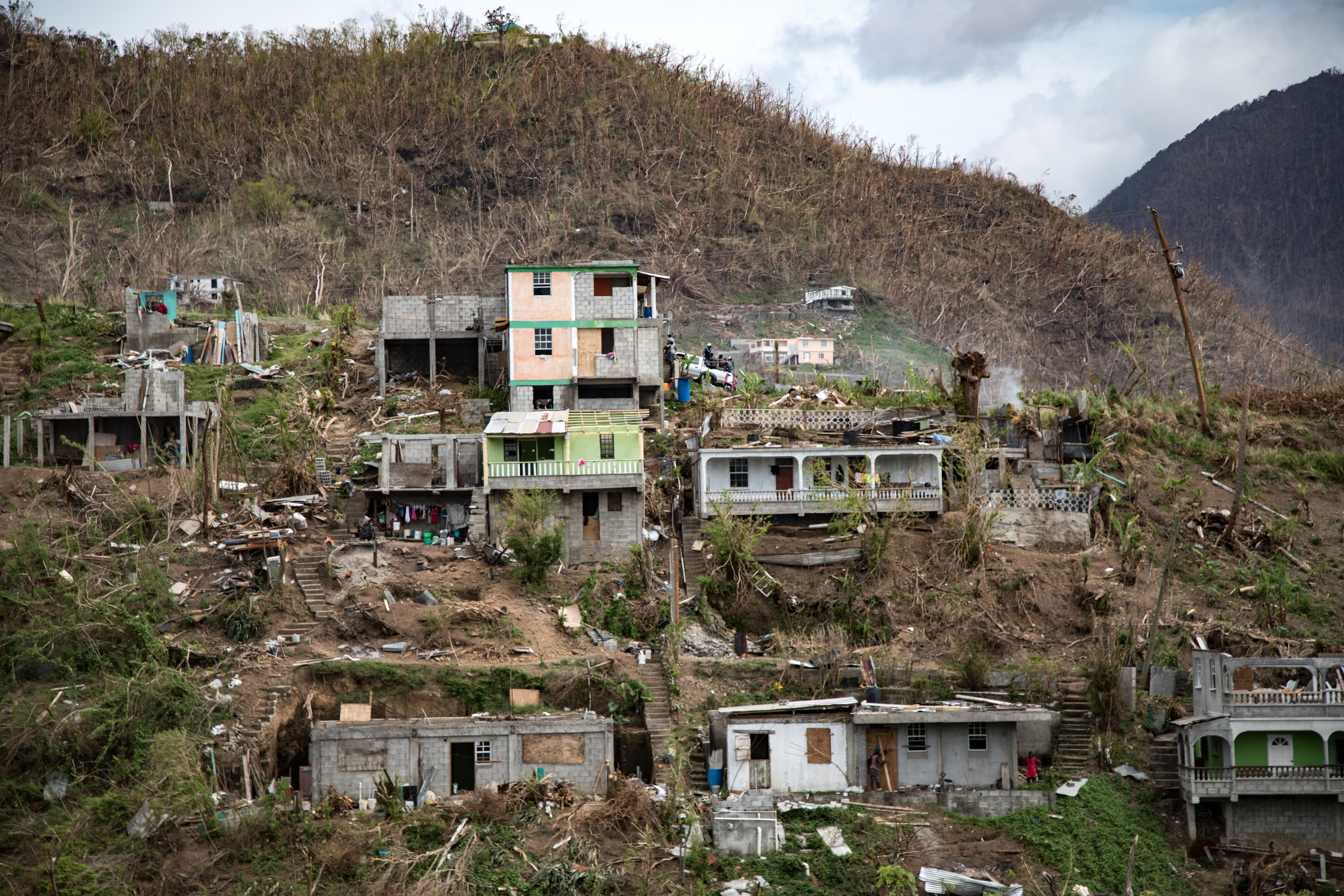 Not a village was spared on the island, population 70,000. Many trees were uprooted and nearly all were rendered leafless. An official post-storm government survey, said every house in the country has been damaged to some degree, including these properties perched on the edge of a ravine in Mor. 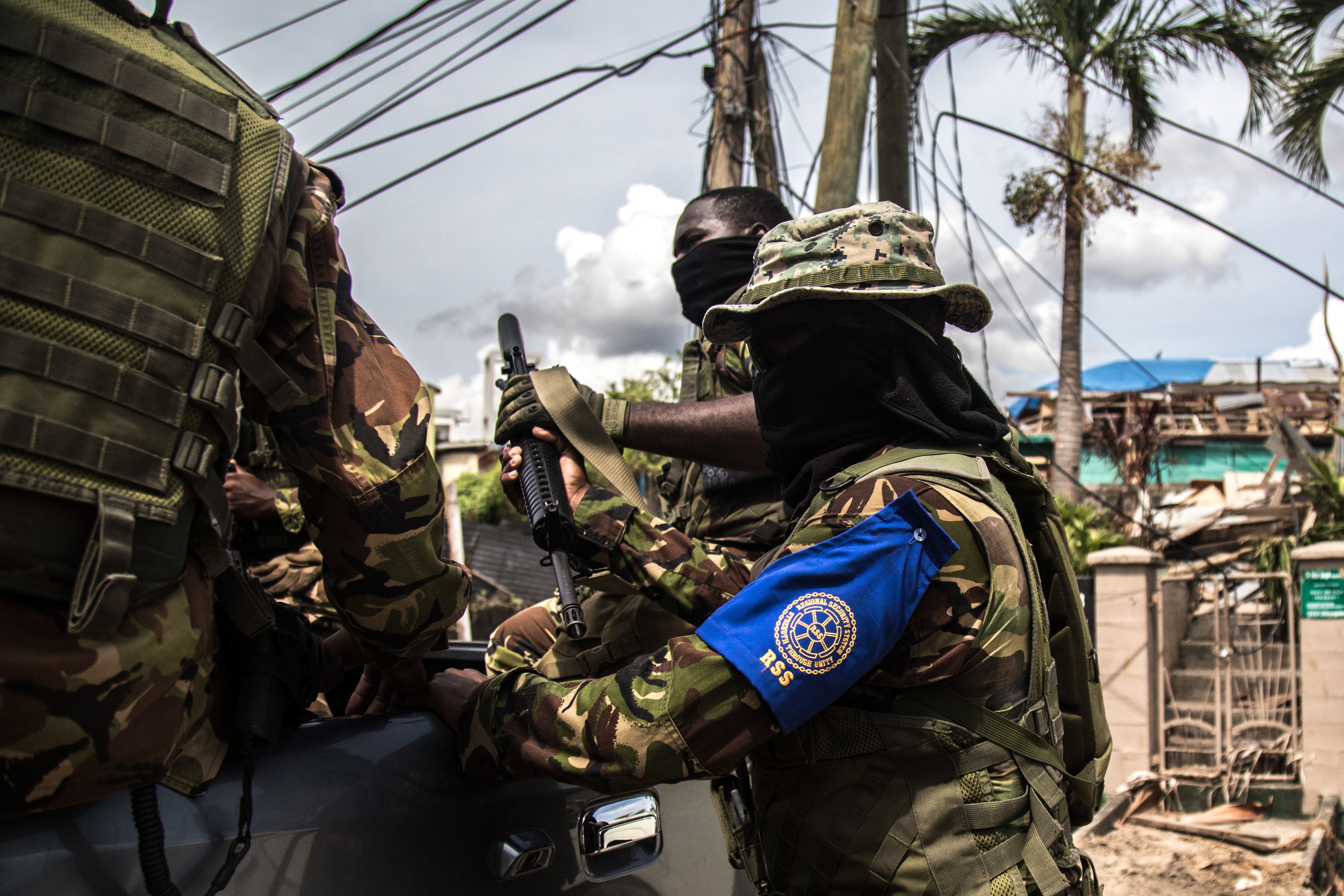 Security forces from larger islands in the eastern Caribbean (Barbados, St. Lucia, and Antigua) were deployed to Dominica to prevent looting in Maria’s chaotic aftermath. The unrest was quickly quelled, but a 6pm curfew remains in place in Roseau, along with a state of emergency. 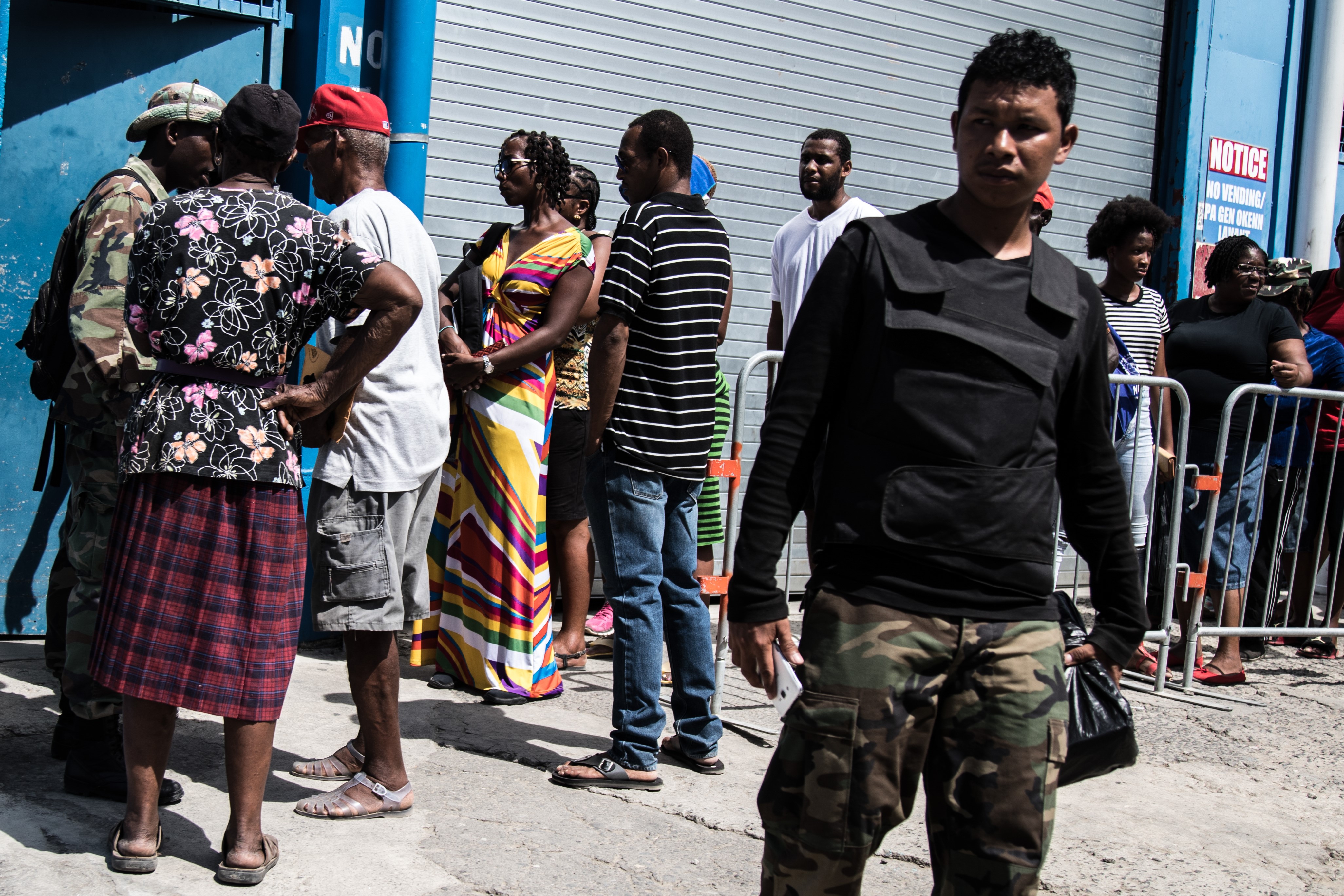 Soldiers and police monitor businesses around the island, such as this supermarket in Roseau. Dominicans now have to wait for hours under the hot sun to top up their phones, withdraw cash from ATMs, and purchase supplies for their households. 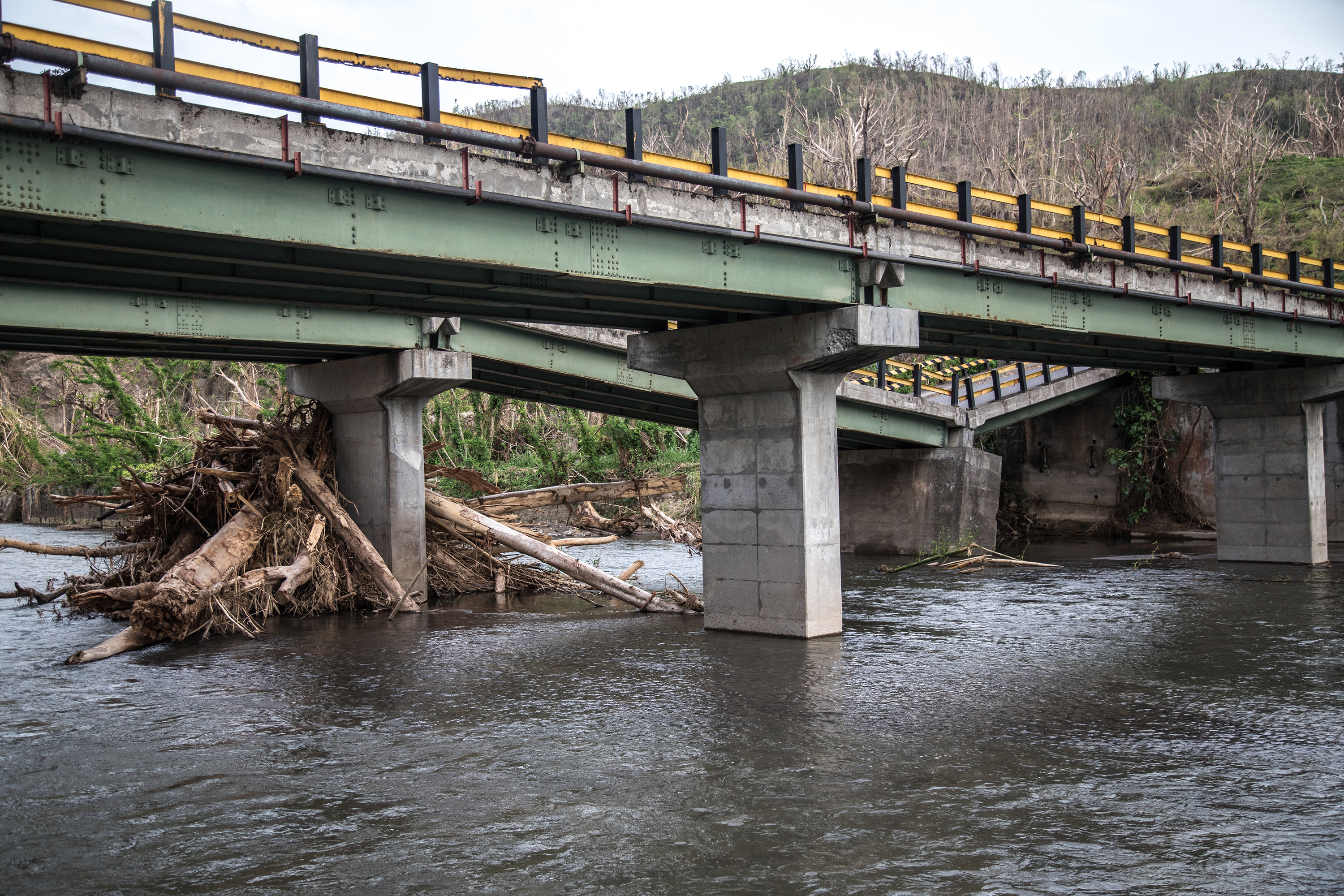 Mass flooding and debris-laden landslides destroyed several main roads and bridges across the island. This bridge near Mero was already badly damaged by Tropical Storm Erika in 2015. Parts of Dominica had yet to recover from that storm when Maria struck and took the destruction to a whole new level. 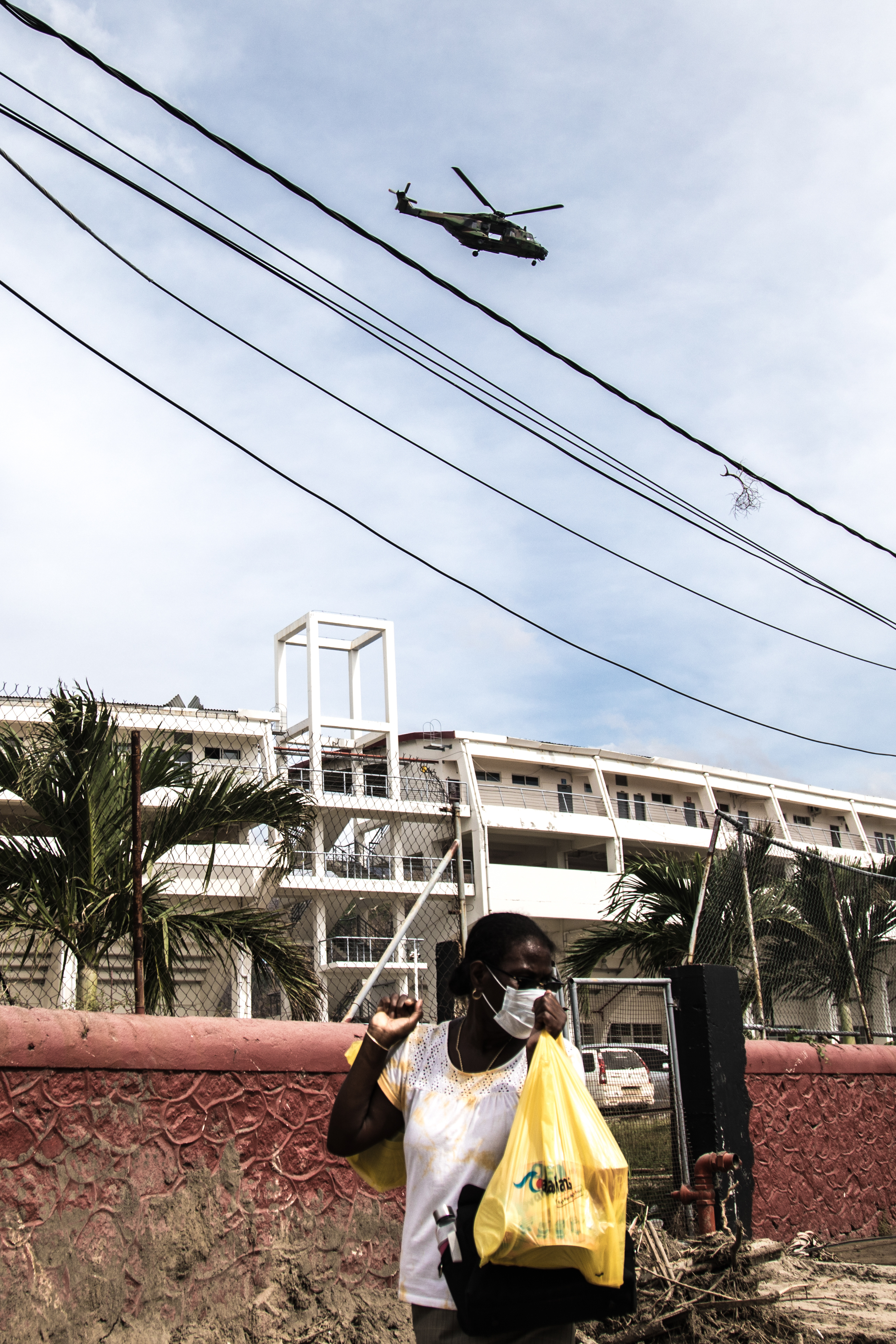 Dust is kicked up as a helicopter carries aid into Windsor Stadium from foreign support ships anchored off the coast. A fetid odour of burning rubbish and rot hangs over the capital. 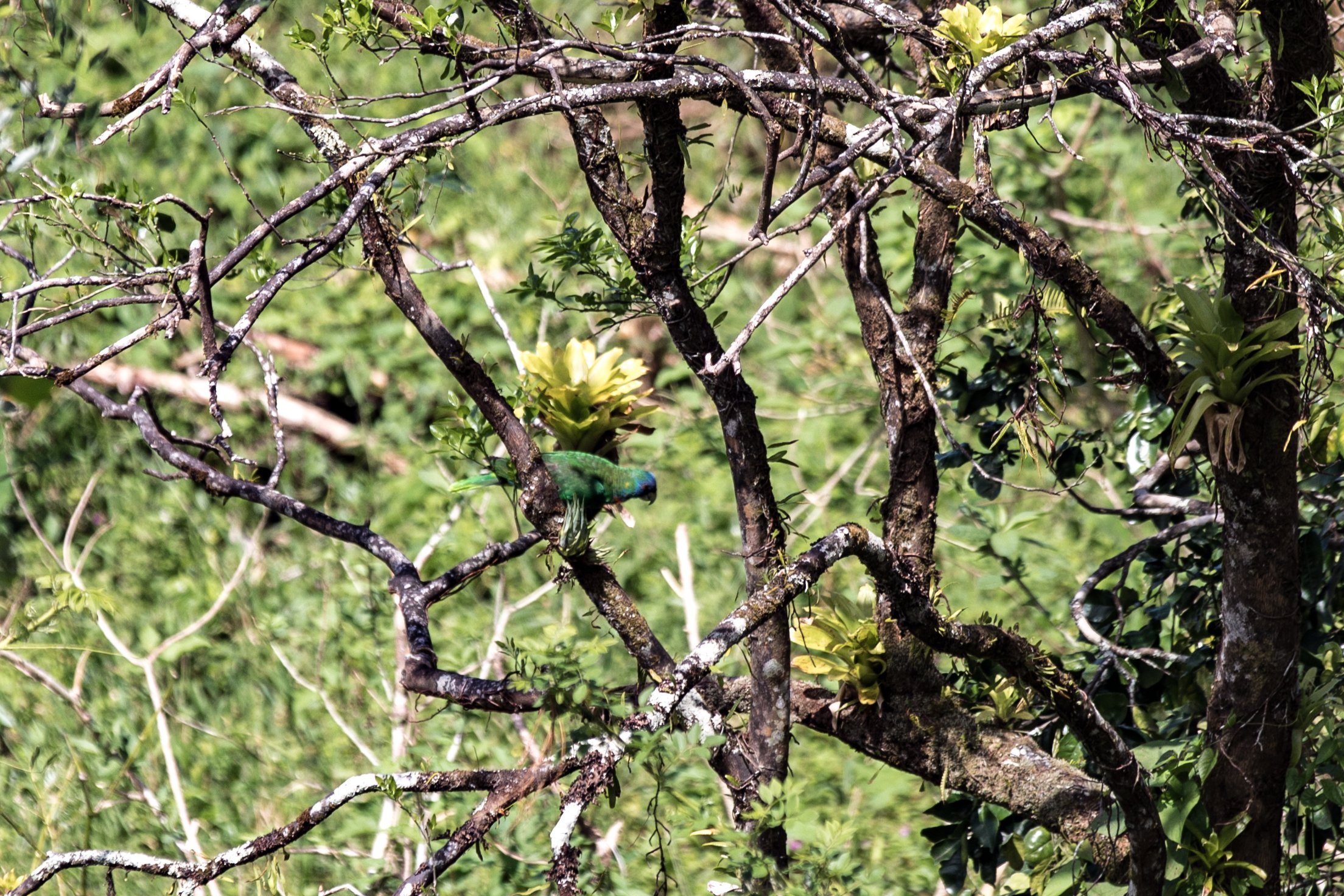 An extremely rare red-necked (Jaco) parrot scavenges for food in one of the thrashed rainforests. These birds are only found on Dominica – known for its lush tropical vegetation and vibrant birds of paradise, it is often referred to as Nature Island. Since Maria, sightings of the bird, which features on the country's flag, have been scarce. 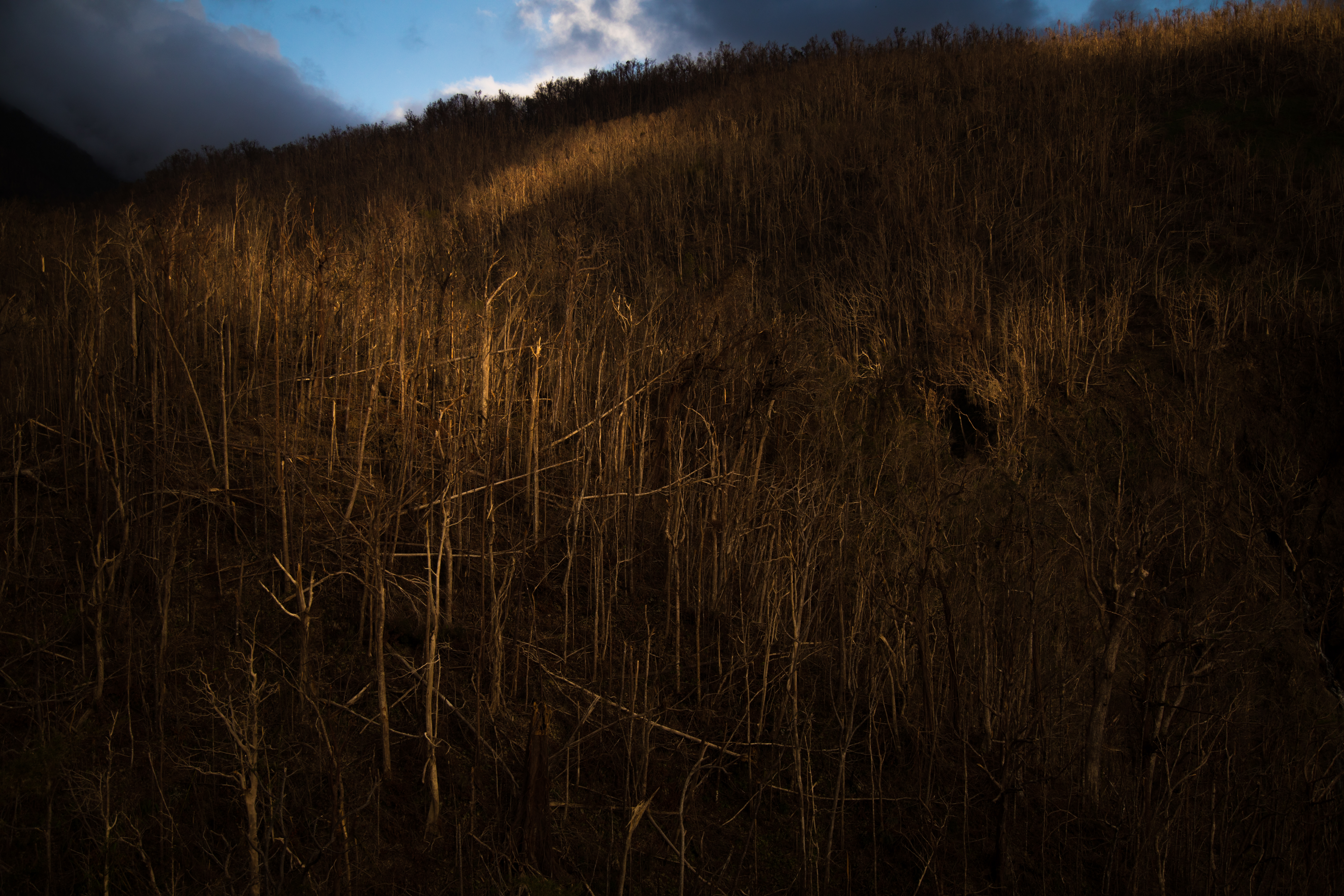 The 280 kph winds denuded the ancient forests that cover every canyon and valley on the island. Pockets of foliage remain, but Dominica's very identity is at stake. A thousand hues of green have been stripped into a single shade of brown. Dominicans mourn the loss of their woodlands, but they know, having survived Erika – not to mention the ravages of Hurricane David in the 1970s – that the emerald canopy will grow back. 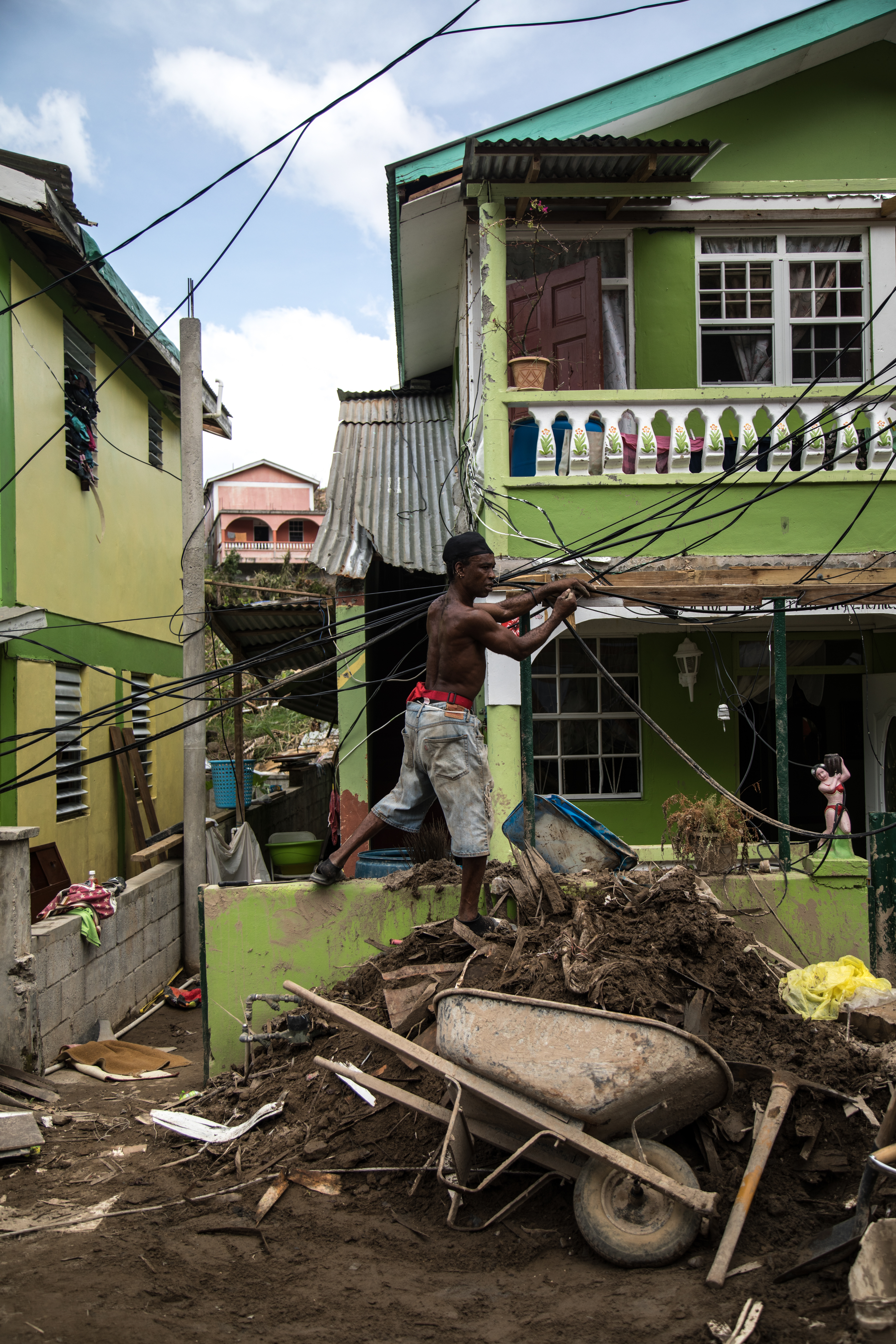 A man clears debris from his home outside Roseau. Most Dominicans aren’t waiting for assistance from the central government, overwhelmed as it is. They’re taking to the streets with axes and shovels to clear houses and roads themselves. 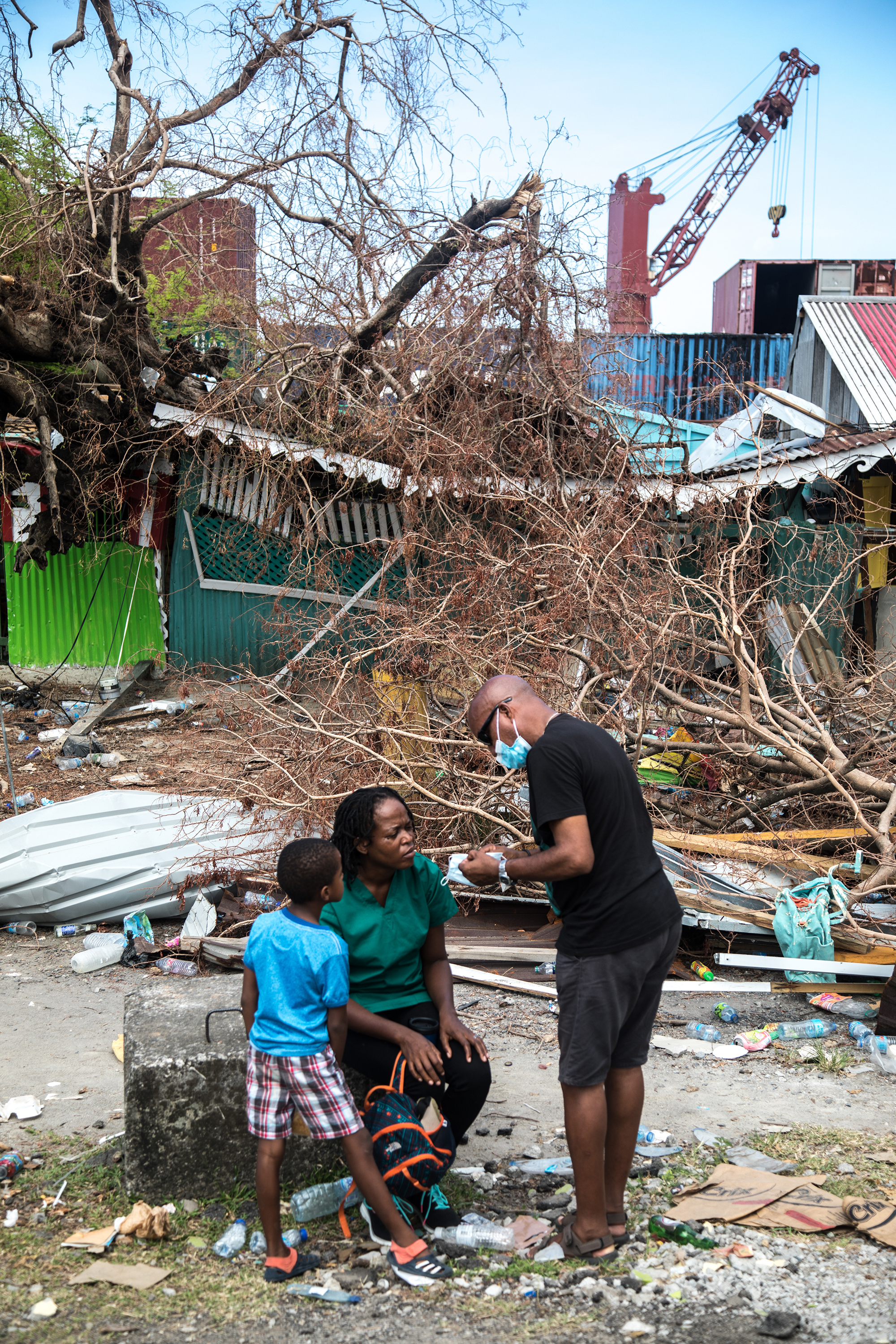 A father hands masks to his family. The burning of heaps of debris and rotten planks of wood has filled the air with abrasive smoke. 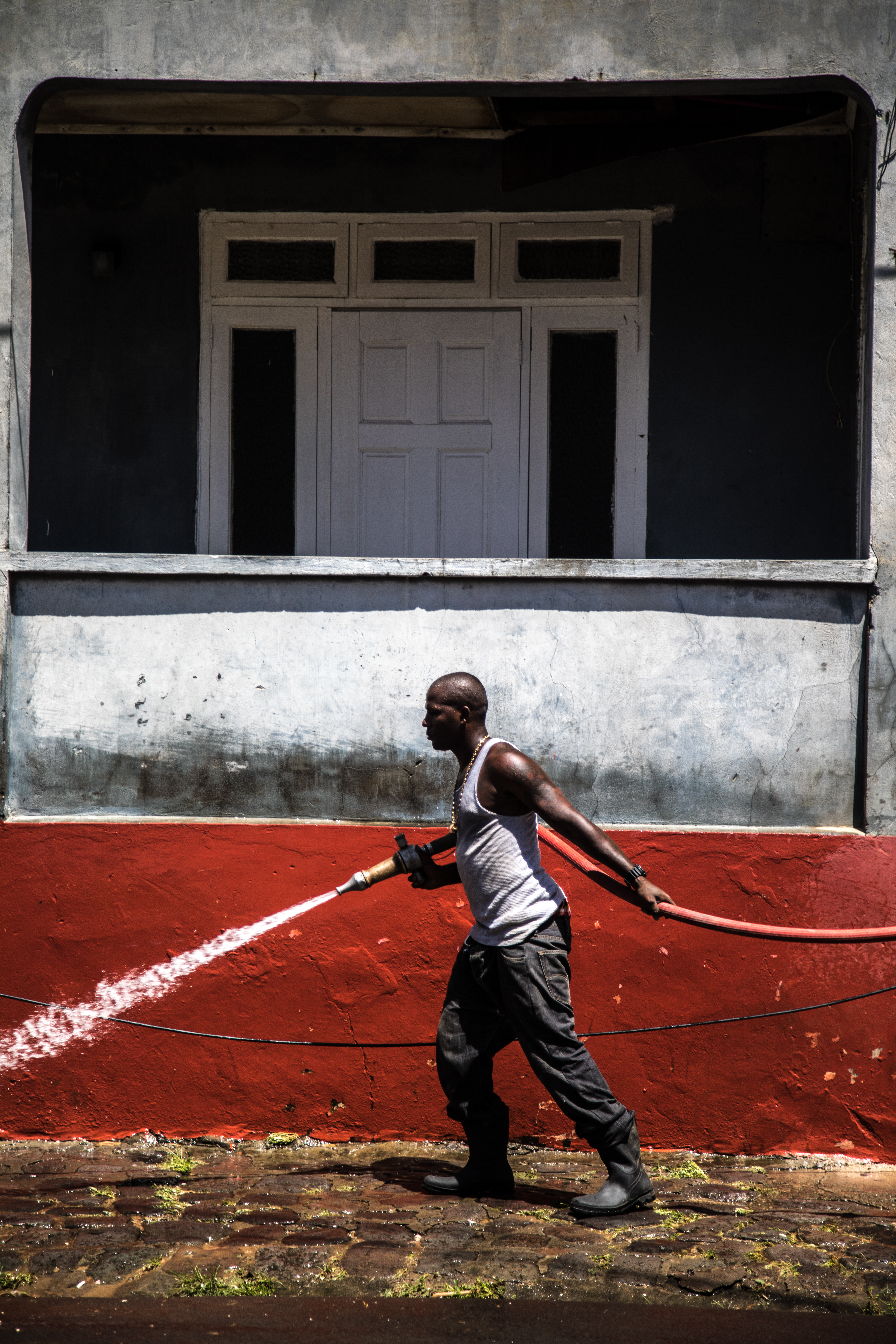 A fire brigade volunteer washes mud off the streets in and around Roseau. Drains became clogged with the debris and dirt the flooding left behind. Roseau is painstakingly being cleared of Maria’s wreckage, and the city is slowly bustling back to life. 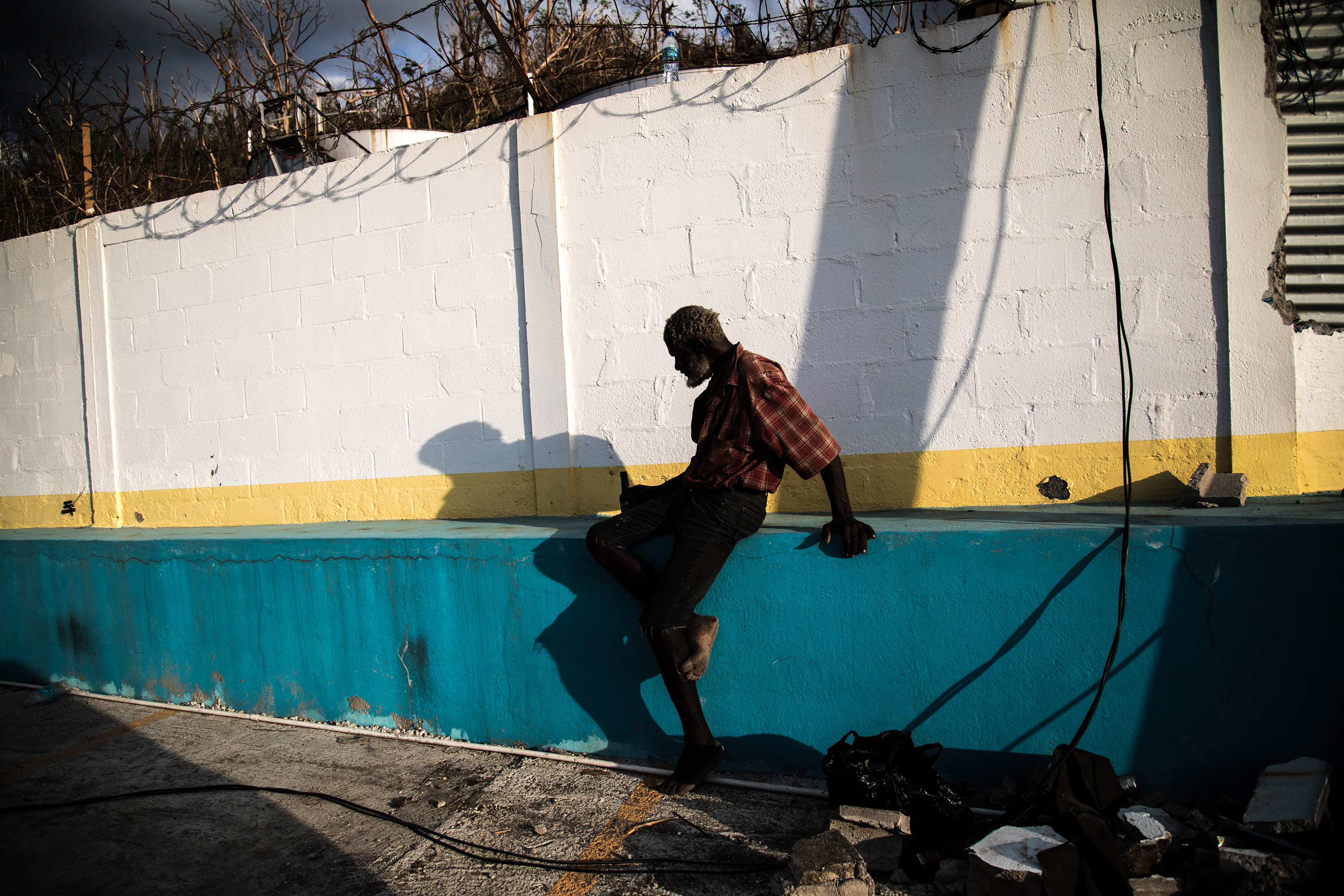 Although there are shelters for those displaced by the storm, many traumatised Dominicans still meander around the island’s villages and coasts, living off whatever aid they can find. 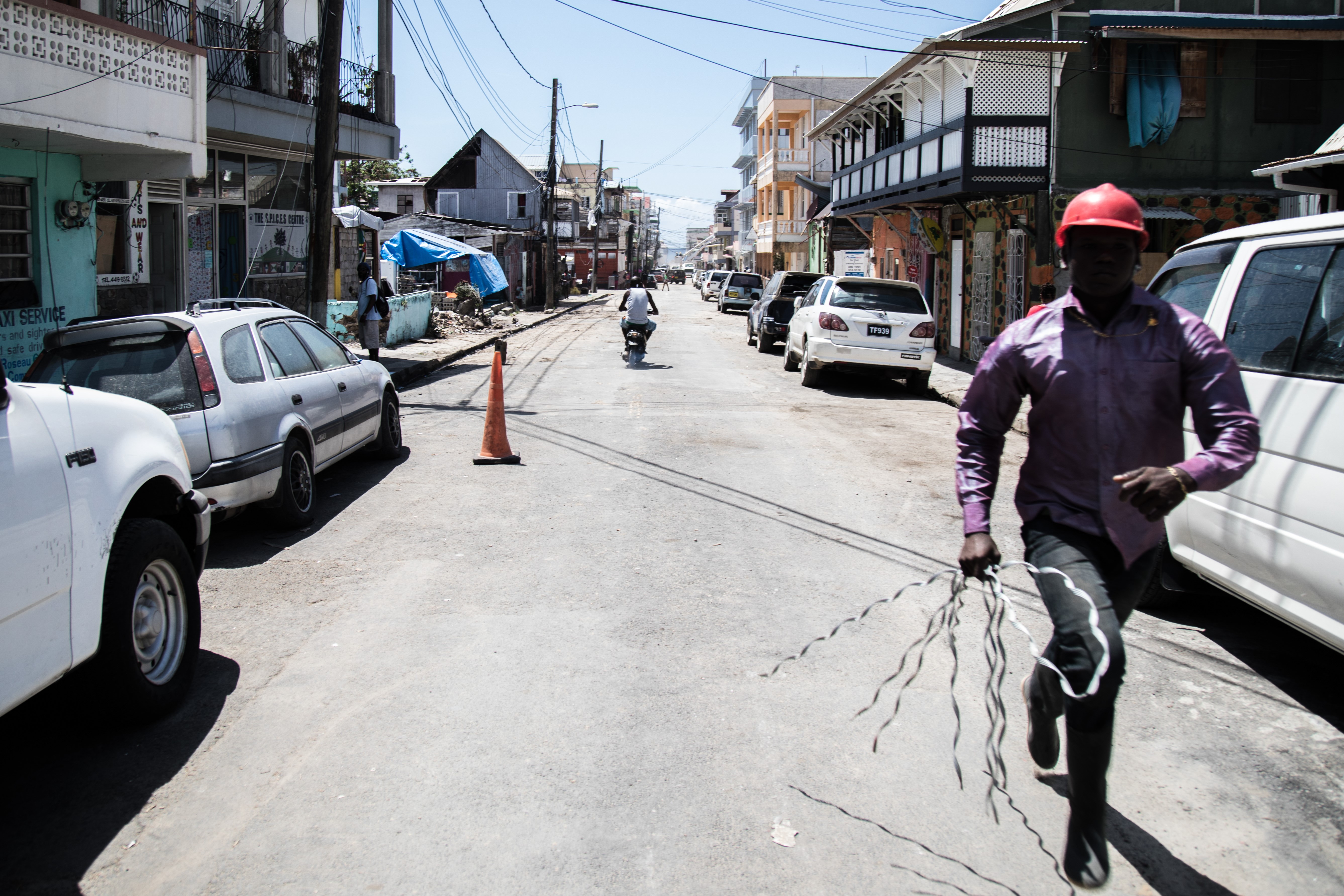 A technician from the Dominican Electrical Company runs down a main street in the capital. Getting government facilities, police barracks, and the emergency services back online has been a top priority. As the one-month mark approaches, Roseau’s stores and banks have also partially reopened. 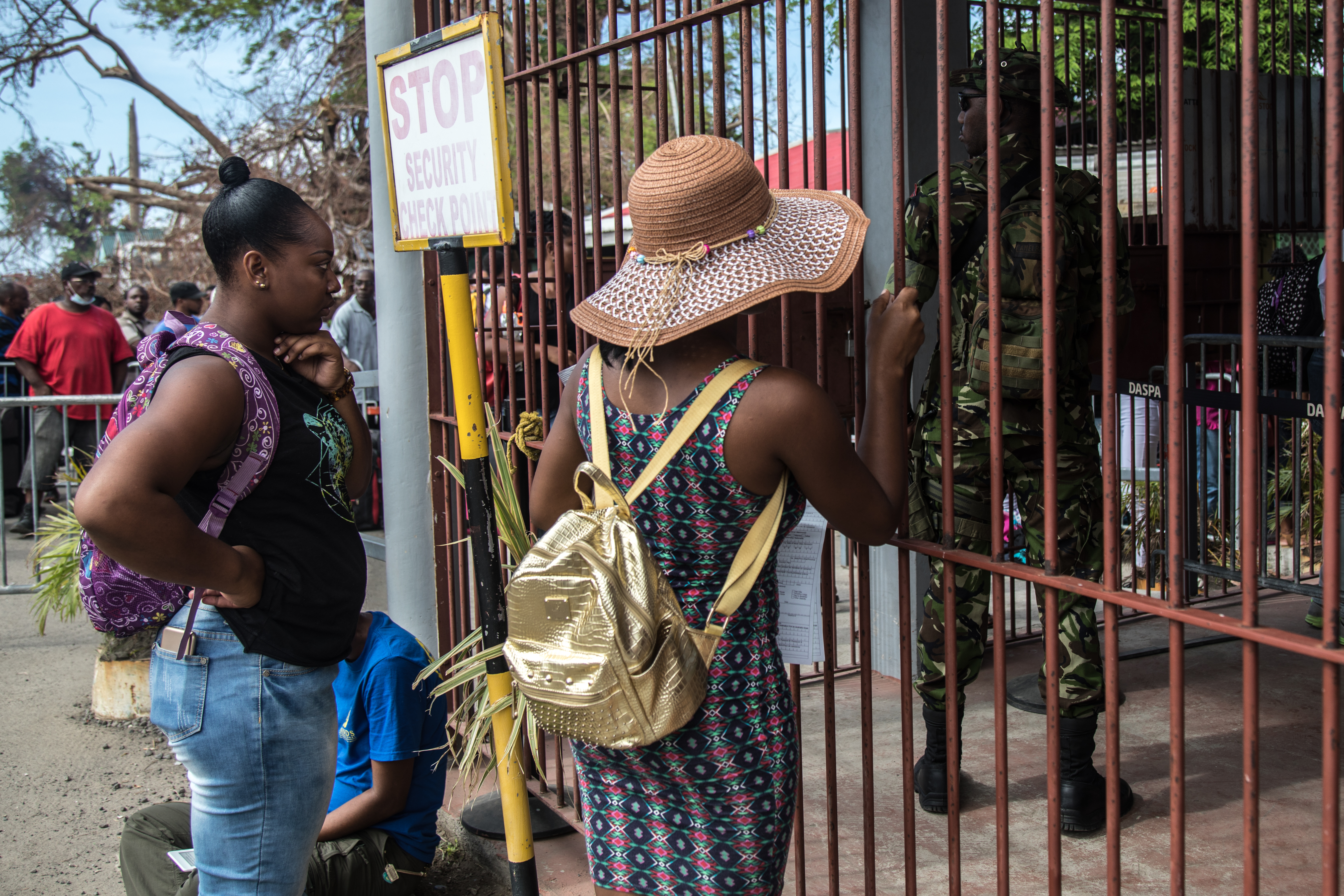 Waiting for Dominica to get back on its feet simply isn’t an option for some. Many people completely lost their homes in the storm and/or their jobs in the mass layoffs sweeping the island. A significant number of Dominicans are choosing to leave until the situation changes. Some have no plans to return. 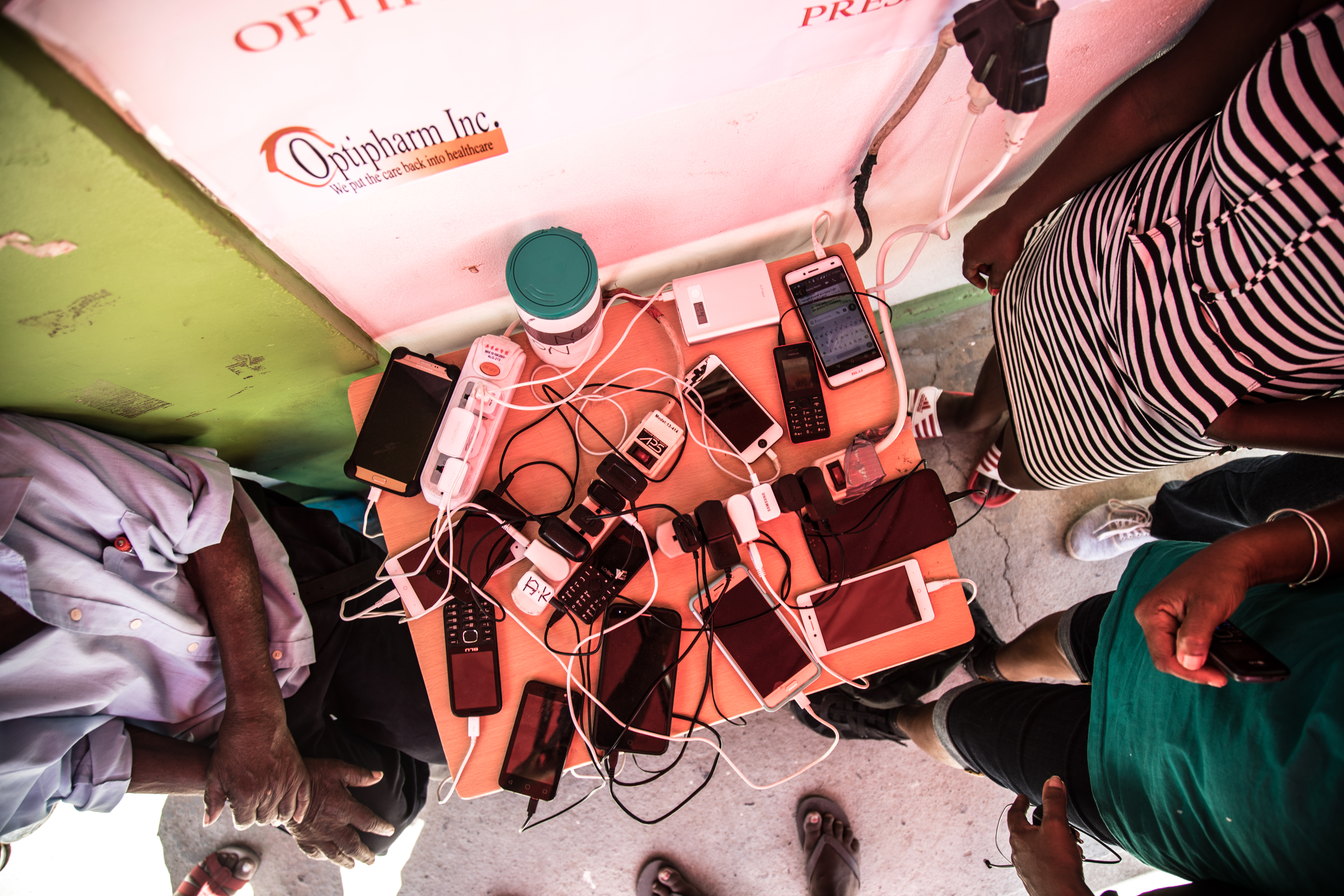 A plug dangling from a private clinic becomes a vital charging station. With power out in 99 percent of the island, everyone is desperate to charge their phone to communicate with friends and family abroad or across Dominica. 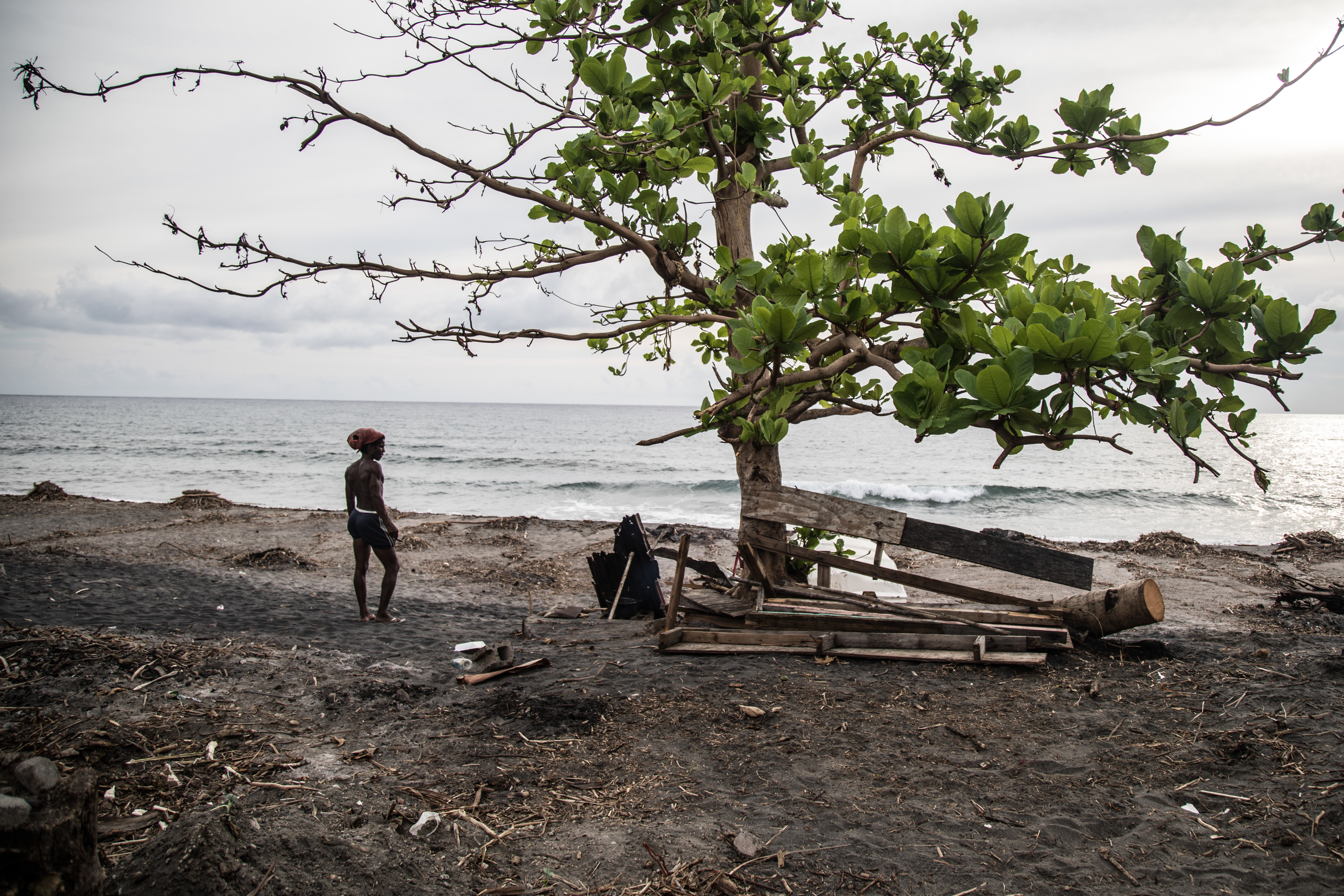 Glennsworth Irving was rendered homeless when Maria blew his house away. He is cooking some rice dropped off by a government truck. Irving has fashioned a makeshift shelter under a blooming almond tree on Mero Beach. He is optimistic that – much like the tree – Dominica will soon come back to life. 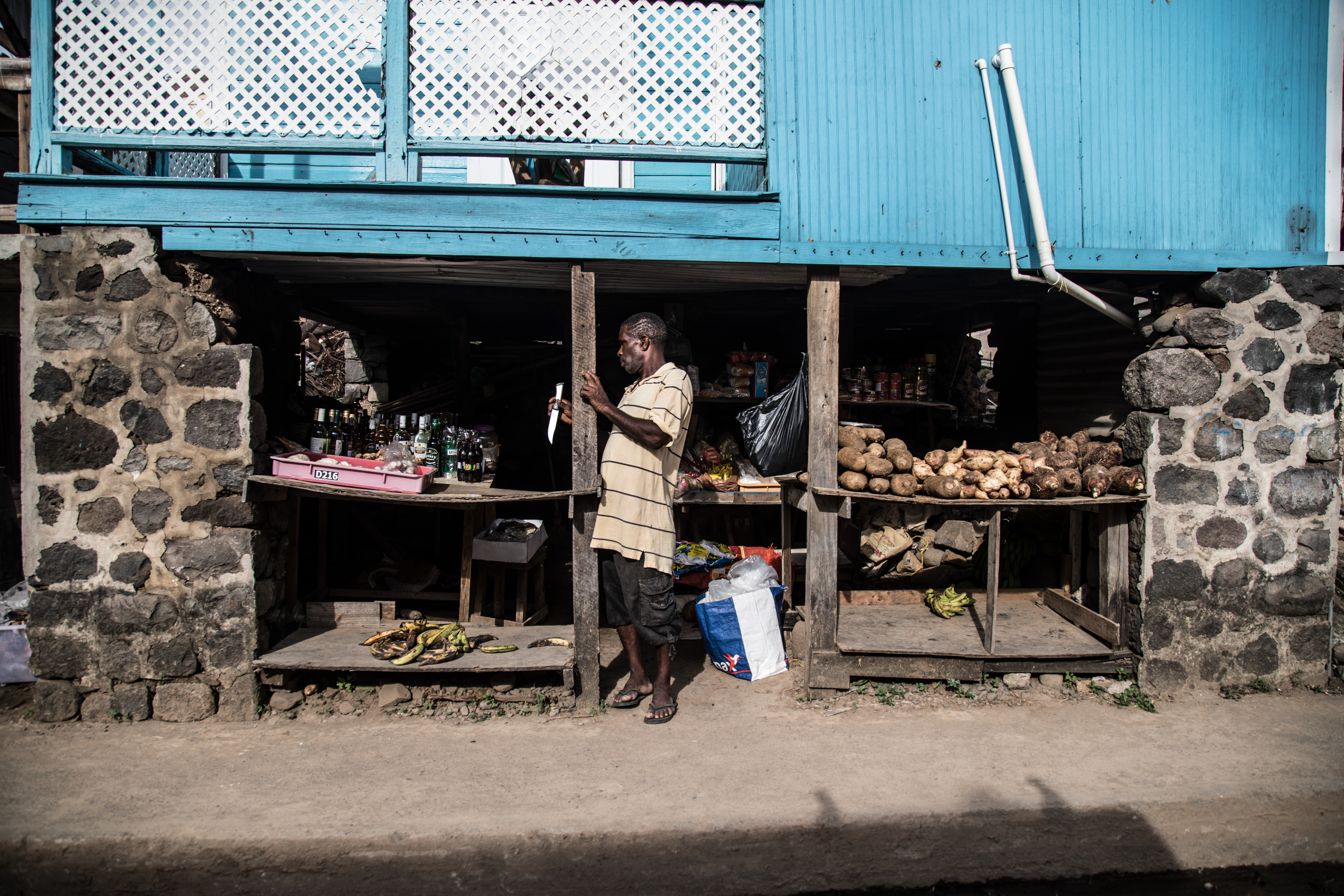 A grocer reopens with a bounty of cassava and plantains. Staple crops are being harvested again, weeks after Maria brought agriculture to a standstill. Ivonne Salbon, a local farmer, isn’t that worried about the future. She says Dominica is a “blessed island with rich soil and divine providence”. 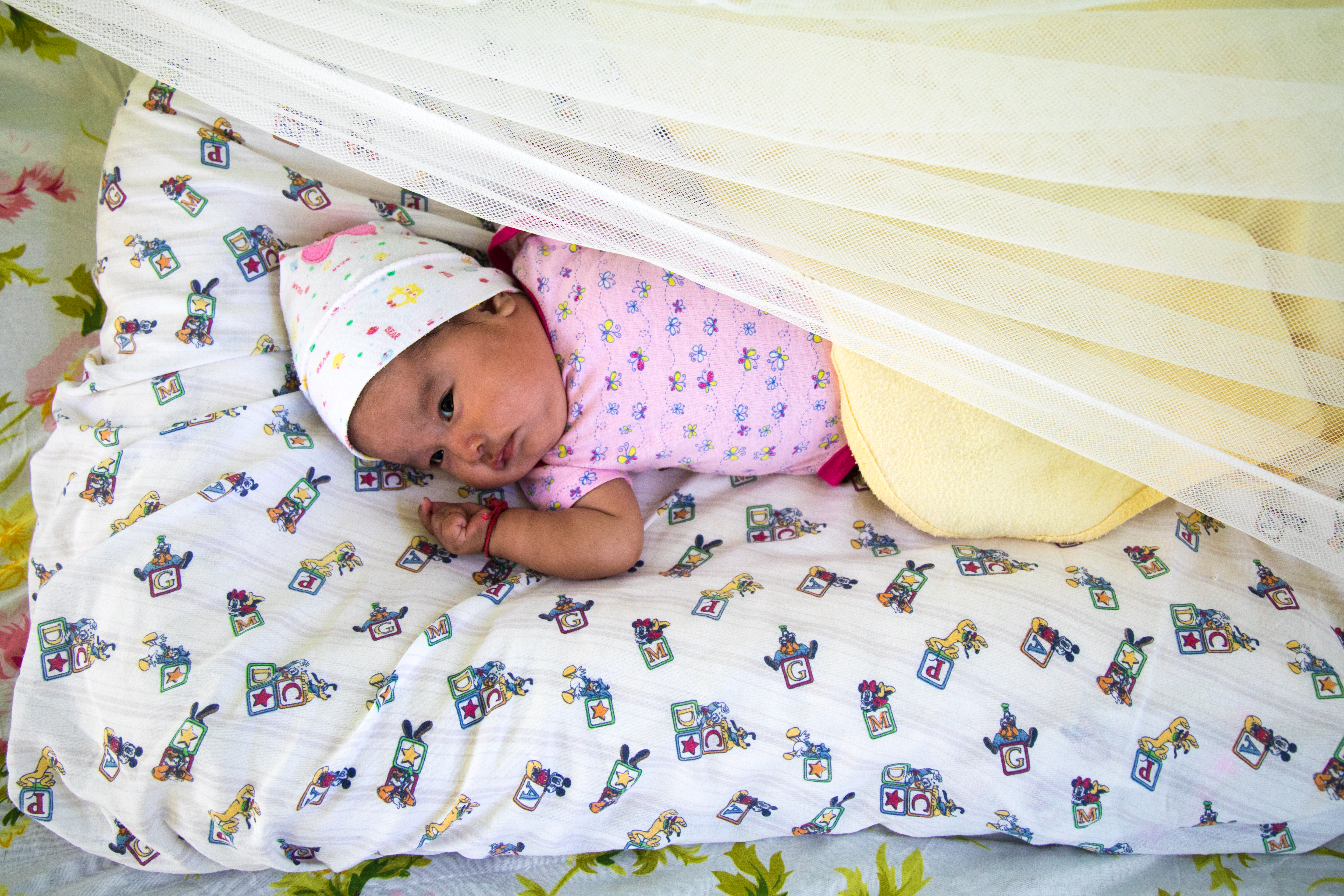 Kadija, born only days before Maria struck, awakes in her makeshift crib at a shelter for displaced people in the indigenous Kalinago Territories. Her mother, Francelea, remembers holding her newborn as the hurricane tore the roof off her wooden shack. She prayed for the storm to go away and spare them until it did. Francelea, a single mother, is now starting again, building another shack over the remains of the old one, anxious about her little one’s future.