Four-year-old Huzaifa stood nervously against a wall as a nurse recorded her measurements. Her stick-like arms hung limp by her sides and her ribcage protruded against the skin of her chest.

She is one of more than a half-million people who, since 25 August, have fled ethnic violence in Myanmar’s Rakhine State for the relative security of the sprawling refugee camps of Cox’s Bazar in Bangladesh.

More than half of the new arrivals are children like Huzaifa. They are completely dependent on humanitarian aid for basic needs like food, water, and sanitation.

As the crisis pushes into a seventh week, refugees are facing another challenge: the risks of malnutrition. 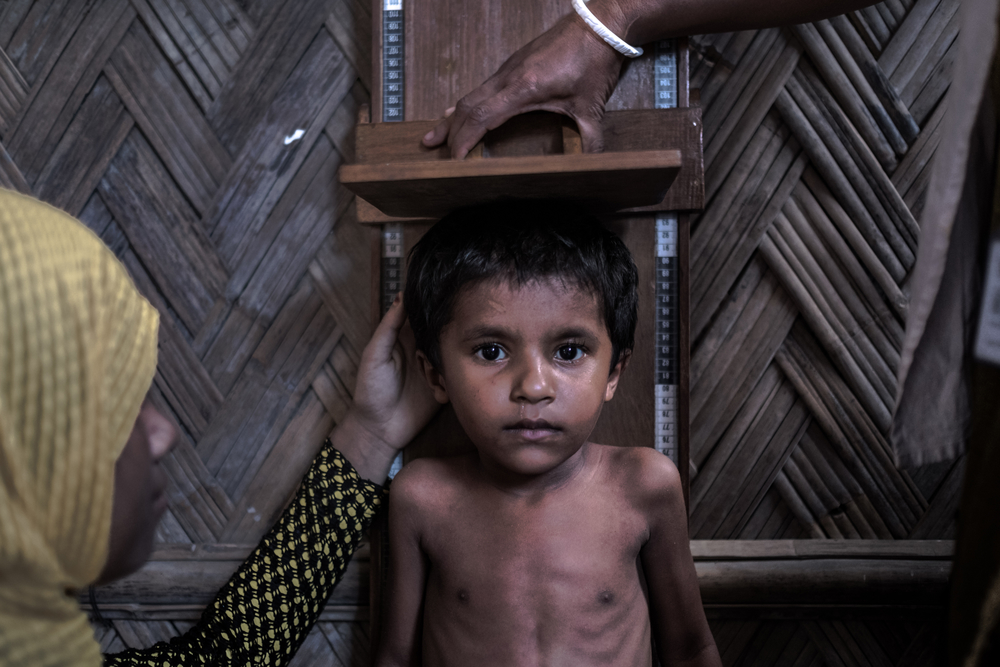 Tommy Trenchard/IRIN
Four-year-old Huzaifa is measured by ACF staff at a feeding centre in Kutupalong refugee camp in southern Bangladesh.

Many Rohingya refugees are going hungry as aid groups and the government struggle to reach the sprawling camps with consistent food supplies. One in five children in the camps is malnourished, according to Action Against Hunger, or ACF, which has been screening young children for malnutrition at a feeding centre in Kutupalong camp. And more than 14,000 newly arrived children are showing signs of severe acute malnutrition, which can be life-threatening, according to aid groups.

Huzaifa’s story is typical of those who have fled the latest wave of violence in Myanmar. When soldiers arrived in her village in the Tangbazar area of Rakhine State, the entire population fled in panic. Huzaifa’s father, Nur Lamin, said he stayed just long enough to see the first houses at the southern end of the village set on fire by soldiers, before fleeing to the hills with his family. 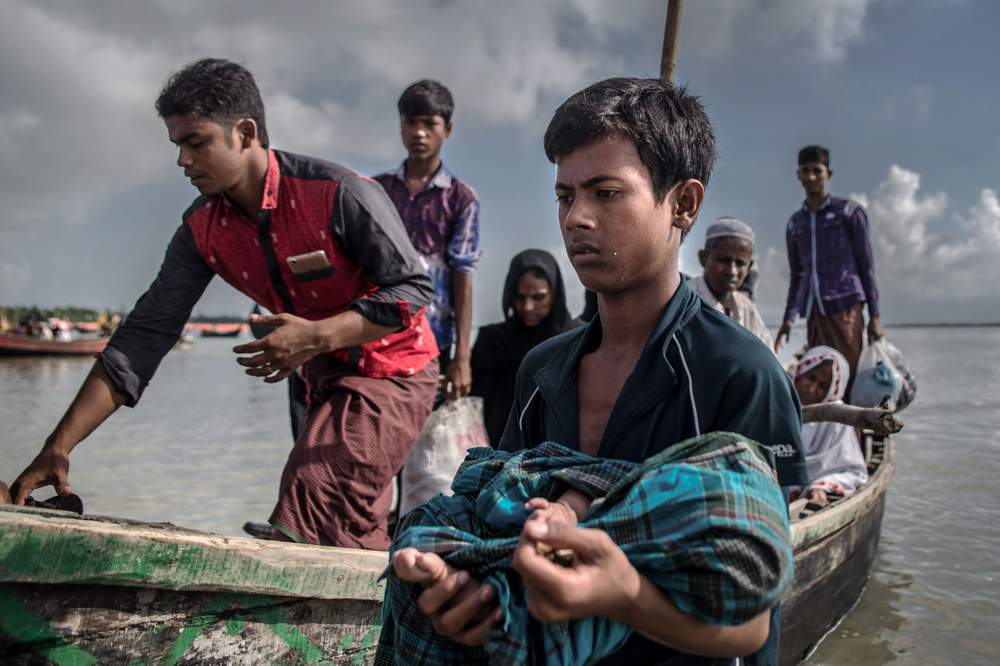 Aurélie Marrier d'Unienville/IRIN
A Rohingya refugee carries a baby ashore after arriving on mainland Bangladesh, on the Teknaf peninsula. More than half of the recent arrivals have been children.

“We were walking for nine days. We slept on the ground, in the dirt, even when it was raining” he told IRIN. “We had nothing to eat. Only a few dried snacks.”

Food was hard to find even after reaching the camps. International aid agencies have struggled to keep pace with the rapid influx, which saw some 300,000 refugees surge into Bangladesh in just the first two weeks. Local volunteers drove along the main roads, throwing out bundles of food and clothes. For those not in the right place at the right time, there was often little help.

Nur Lamin said he and his family were in the camps for nine days before they had their first cooked meal. 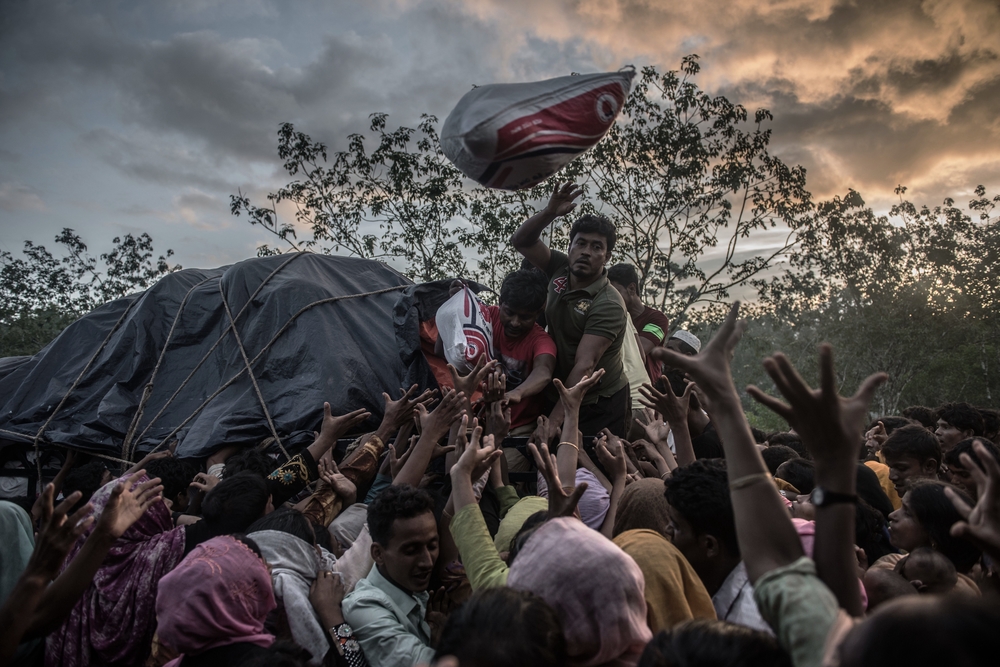 Tommy Trenchard/IRIN
A crowd of Rohingya refugees clamours for food during a distribution by volunteers in Kutupalong in southern Bangladesh. 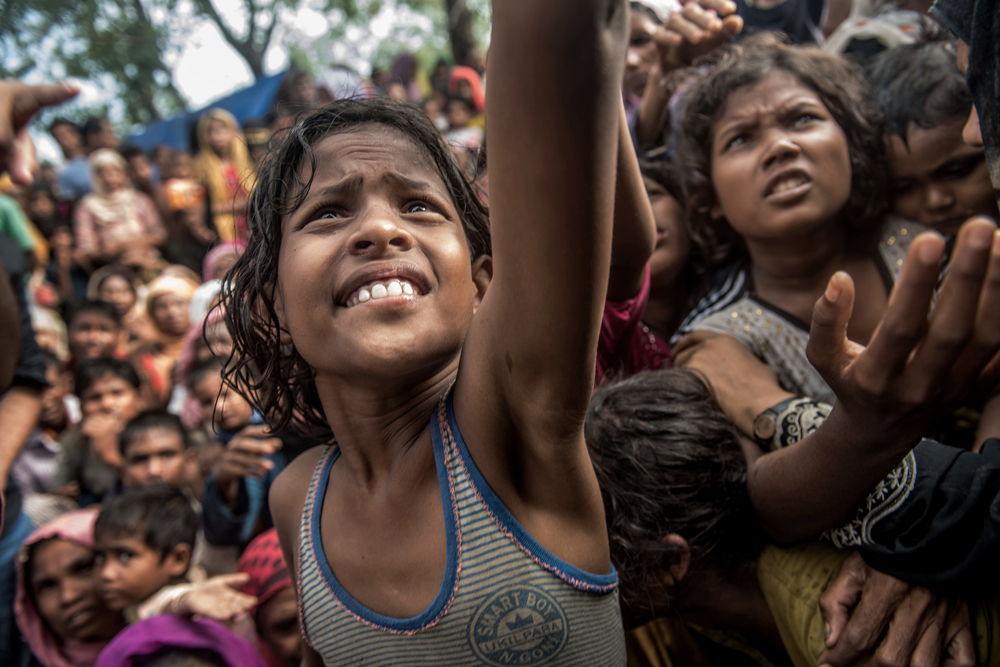 Tommy Trenchard/IRIN
Children reach for food handouts during a distribution by a volunteer organisation in Kutupalong camp in southern Bangladesh.

Food distribution has become more organised in recent weeks. The World Food Programme told IRIN nearly all new refugees have received some sort of food assistance: mainly rice or fortified biscuits. But securing enough to eat is still an ordeal. At distribution points throughout the camps, people wait patiently under the baking sun in queues that stretch for hundreds of metres.

“Once diarrhoea sets in, they become malnourished very quickly,” he said. “Even before the latest influx, that was a problem here.”

Heavy rainfalls and the resulting floods exacerbate the problem; in overcrowded settlements with little basic infrastructure, a heavy rain can flush through the camps and flood latrines. 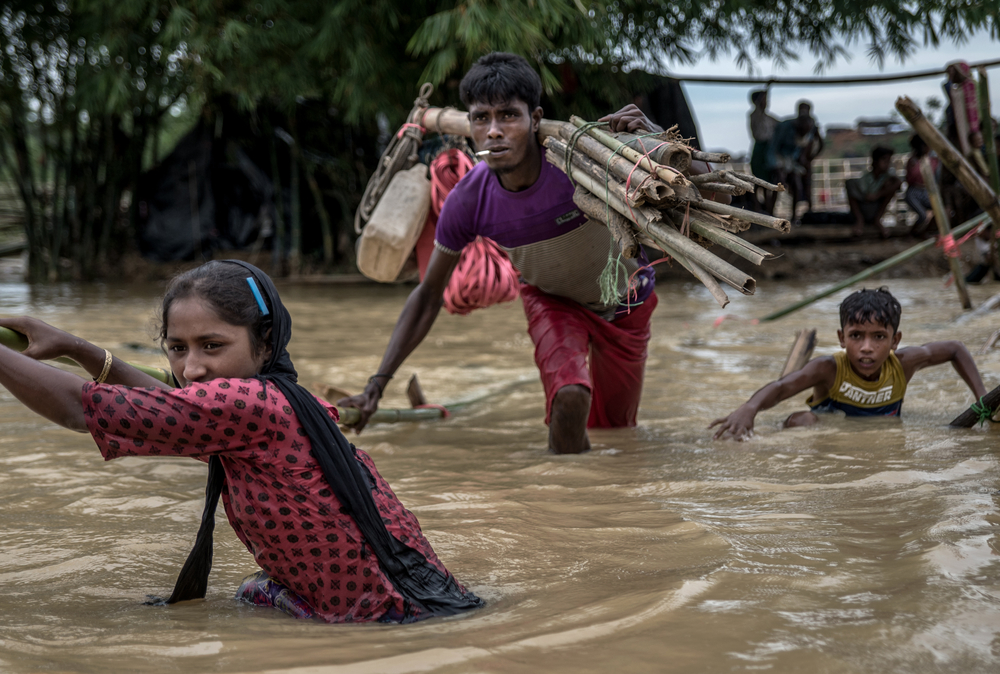 Aurélie Marrier d'Unienville/IRIN
Rohingya carry their possessions across a flooded river in Balukhali refugee camp. Flooding has worsened sanitation conditions in refugee areas, which exacerbates problems for the most malnourished. 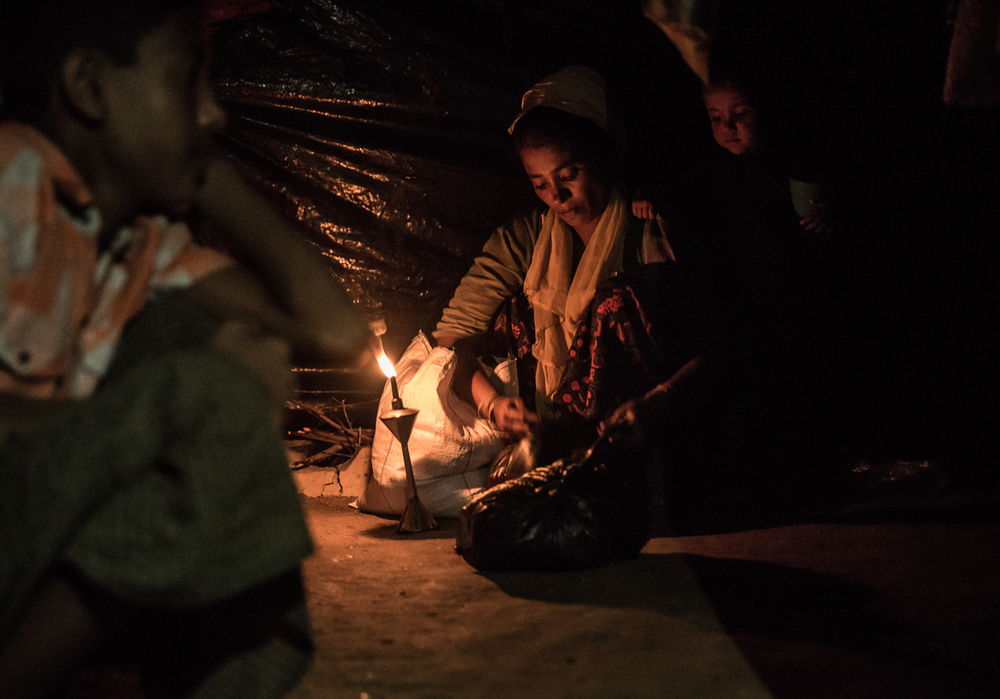 Aurélie Marrier d'Unienville/IRIN
A Rohingya woman lights a fire for cooking in Balukhali refugee camp. Finding enough food to eat is among the biggest challenges for the refugees.

ACF’s feeding centre serves hot meals to refugees and also screens children below the age of five for malnutrition. Among the children receiving high-energy supplements at the facility are those who were here long before the latest influx. Nure Alam, 25, arrived in Bangladesh more than a year ago. She brought her son, two-year-old Robi, to the clinic to treat him for diarrhoea and fever. But medical staff told her he was also malnourished.

As the refugee emergency simmers, aid groups have drastically scaled up their appeal. They are now calling for $434 million for the response – almost six times more than initial projections a month earlier.

For now, health workers will closely monitor four-year-old Huzaifa’s nutrition levels for the next several weeks. But the risks remain throughout the overflowing camps. *Aid groups report that only 168,742 people have received a full food ration.

“We’re trying our level best to access all areas,” said Hasan. “But it’s impossible to reach everyone. The numbers are huge.” 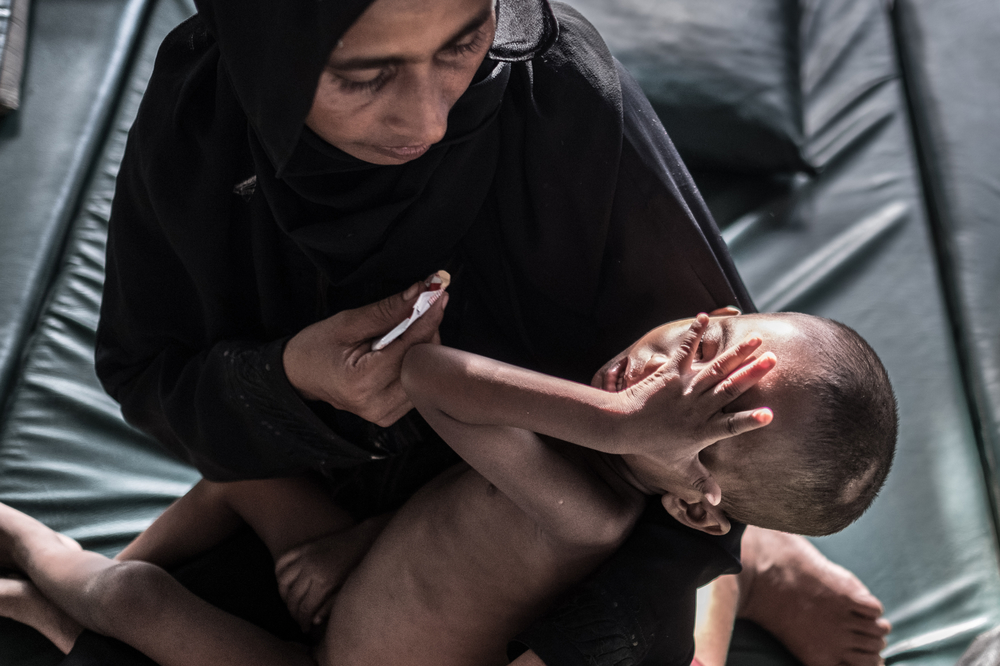 Tommy Trenchard/IRIN
Rokima Begum, 35, tries to get her malnourished two-year-old son, Tarek Aziz, to eat a peanut-based supplement at an ACF feeding centre in Kutupalong refugee camp in southern Bangladesh.

(TOP PHOTO: Two-year-old Salma, a Rohingya refugee from Myanmar's Rakhine State, lies on a mattress in an NGO-run feeding centre in a refugee settlement in Kutupalong, Bangladesh. Aurélie Marrier d'Unienville/IRIN)