Migration crises in Europe, the Middle East, and North Africa reconfigured global politics. So why – as the millionth South Sudanese took refuge in Uganda earlier this year, and with the total number of South Sudanese refugee and asylum seekers now more than two million – is there no comparable shift in the political posture of East African states?

Uganda hosts by far the greatest number of South Sudanese refugees, but Sudan also hosts nearly half a million, Ethiopia more than 400,000, and Kenya over 100,000. In 2017 alone, the number of refugees increased by 500,000, and there’s no sign the massive and rapid depopulation of South Sudan will abate any time soon.

All four host countries are crucial to sustaining, or spoiling, any conflict resolution effort in South Sudan, but it’s time to end the presumption that the refugee exodus is sufficient to alter regional geopolitics. There’s little evidence that the mass movement of South Sudanese across international borders has mobilised the country’s neighbours to positively act to address and resolve the multiple political, security, and humanitarian crises in South Sudan.

It would be a mistake to believe there is a migration tipping point at which the region, accustomed to tolerating refugee populations for decades, will suddenly unite or work collaboratively to address the conflict. For the most part, the presence of South Sudanese refugees doesn’t affect core national or regional political or security interests.

These include, but are not limited to: economic ties and pecuniary relations; the belief in maintaining a regional balance of power; ongoing jockeying for regional hegemony between Ethiopia and Kenya, Ethiopia and Uganda, and Ethiopia and Egypt; historic antagonisms between Sudan and Uganda (even if that bilateral relationship is currently improving); the belief that stability in South Sudan is best served by a continuation of the current regime; or, conversely, that a degree of instability in South Sudan is necessary to ensure Juba is never strong enough to again threaten its neighbours.

The bottom line is this: the prospect of the systematic depopulation of the world’s newest country doesn’t motivate action by the region.

To unconditionally commend neighbouring countries for their generosity in hosting civilians fleeing conflict or starvation overlooks the cynical reality that hosting refugees is an opportunity for some states to raise money and burnish reputations.

Even worse, it risks sending the message that as long as sanctuary is provided to civilians, there’s little expectation that the neighbours need do anything more to tackle the conflict.

Evening approaches at the Dzaipi transit centre in northern Uganda, where UNHCR has erected tents for many of the refugees 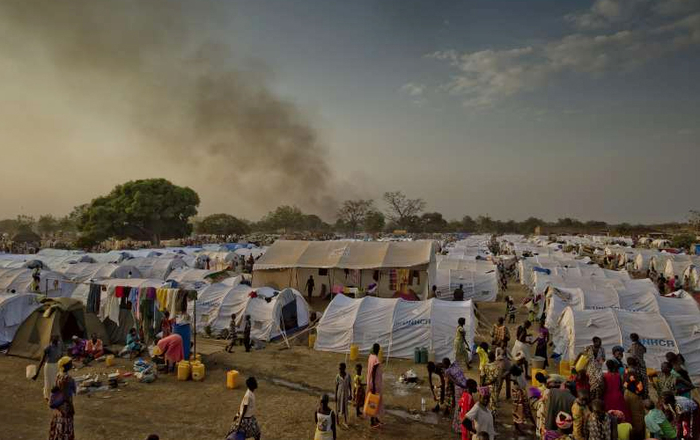 Why the refugees don’t matter

Depending on the neighbour, different factors account for the false logic that refugee flows matter.

In the cases of Kenya and Uganda, South Sudanese refugees are hosted in the most marginal, distant parts of both countries, far removed from the politics of Nairobi and Kampala.

The Turkana of Kenya may be upset by the influx of refugees into Kakuma refugee camp, but Kenyan political elites do not perceive the South Sudanese influx in the same terms.

Nor are all refugees perceived equally in Kenya. In the popular imagination of some Kenyans, a Somali migrant in Dadaab, or Eastleigh, Nairobi is immediately to be treated with suspicion.

The narratives – all too often seen through the distorted prism of terrorism – and conceptions of Somali-Kenyans within the national Kenyan identity, position Somali refugees quite differently from South Sudanese refugees.

In Uganda, although national security is an overriding policy concern, the presence of South Sudanese refugees doesn’t threaten the integrity of the state, in the way, for example, that the insurgency of the Lord’s Resistance Army (LRA) once did.

While there have been some concerns that the scarcity of resources, demonstrated in competing demands for land and water, has and will upset host communities, such problems will not rise beyond the local level. A cynic might argue that Kampala has historically shown little concern for its citizens in northern Uganda, so why should non-citizens present there be of any greater interest?

To the north, in Sudan, most fleeing South Sudanese are in immediate border areas, such as White Nile and South Darfur states, or in the capital, Khartoum.  And apart from their designation as refugees as specified by international convention, little has changed in Khartoum’s eyes since the times when such migrants would have been categorised as internally displaced (Sudanese) persons.

If Sudan is less inclined to meddle in South Sudan’s internal affairs than has historically been the case, it’s because of broader policy objectives such as regional alignment with Ethiopia and the enticing prospect of normalising relations with the United States. The presence of South Sudanese on Sudanese territory is not a push factor.

Ethiopia was perhaps most sensitive to the implications of hosting South Sudanese refugees, given concerns that the delicate balance between Anyuak and Nuer in its Gambella region would be upset by an influx of South Sudanese Nuer.

In the early phases of the conflict, in late 2013 and early 2014, Ethiopia hosted the majority of South Sudanese refugees. And while there have been some incidents in Gambella as a result of the refugee presence, these have been sporadic and far less consequential than other cross-border security issues, including the abduction of Ethiopian children in April 2016, and the August 2017 border incursion by South Sudanese armed forces during the fight for Pagak, an opposition stronghold.

As shocking as it is that South Sudan risks losing another generation to displacement and exile, the belief that this sad development will, in and of itself, motivate regional states to actively resolve the conflict is misplaced.

Any international strategy to engage the region needs to understand the true, divergent and convergent, political and national security goals of each country, individually and collectively. Regional unity of purpose to address the conflict will otherwise remain elusive.

(TOP PHOTO: A South Sudanese refugee looks out of the window of a bus as it arrives at Imvepi settlement in northern Uganda. CREDIT: Peter Caton/UNHCR)