Uganda received its one millionth refugee from South Sudan on 17 August. This influx of people, many of whom have fled terrible violence to seek sanctuary in northern Uganda, has put a significant financial strain on the country and in particular its northern region.

The Ugandan government has looked to external actors for assistance. It hosted a conference in June where international donors pledged support to the tune of $352 million: a significant sum, but still a long way short of the $2 billion that Kampala and the United Nations had hoped to raise.

UN Secretary-General António Guterres lauded the open-door approach of the Ugandan government towards refugees, while the Economist chose to describe it as “a model”. Others remain more sceptical.

Stephen Oola, founder of the Amani Institute Uganda, a Gulu-based think tank, is adamant that “historically refugees have been used by the current regime for dirty political manoeuvres” and that the current situation is “no different”.

In this instance, hosting refugees gives the government leverage to resist international pressure on domestic issues such as the disputed 2016 elections and the campaign to amend constitutional age limits.

But with so much of the focus on the plight of refugees – who are undoubtedly in need of food, shelter, and basic support services – citizens of northern Uganda are once again being sidelined and ignored by their government: an approach that has characterised three decades of political dominance by the ruling National Resistance Movement.

President Yoweri Museveni’s time in power has been marked by a widening disparity between residents of northern and, to a lesser extent, eastern Uganda and those that live in central and western parts of the country; areas from which Museveni draws the bulk of his political support.

While significant strides have been made in reducing those living in poverty – between 1993 and 2013 the percentage of Ugandans living below the poverty lined dropped from almost 60 percent to 19 percent – in that same period the distribution has changed significantly.

From a fairly equal spread across the four main regions in the early 1990s, in 2013 almost half of those in poverty lived in the north, with west and central areas comprising less than 20 percent of the total. Rising levels of individual inequality are being replicated between regions.

Unquestionably the development of the northern region was stymied by conflict. Fighting between Ugandan forces and Joseph Kony’s Lord’s Resistance Army spanned almost two decades (1987-2006). At its peak more than one million Ugandans were displaced in what was described as the “most neglected crisis in the world”.

But the conflict itself, and its aftermath, produced tensions and divisions between citizens in the north and the government, whose forces were accused of carrying out abuses against civilians when they were supposed to be protecting them. These accusations have not been investigated by the International Criminal Court (which has focused instead on the LRA) or national courts.

In the decade since the end of the conflict, efforts to rebuild infrastructure, improve basic services, and to encourage reconciliation have been outlined in a series of Peace, Recovery and Development Plans.

Now into its third iteration, progress made on improving physical infrastructure is visible but question marks remain over the government’s ability to deliver the “soft” components: schools and hospitals often lack the staff and equipment to function effectively and the “peacebuilding” element has been underfunded and gradually pushed aside. 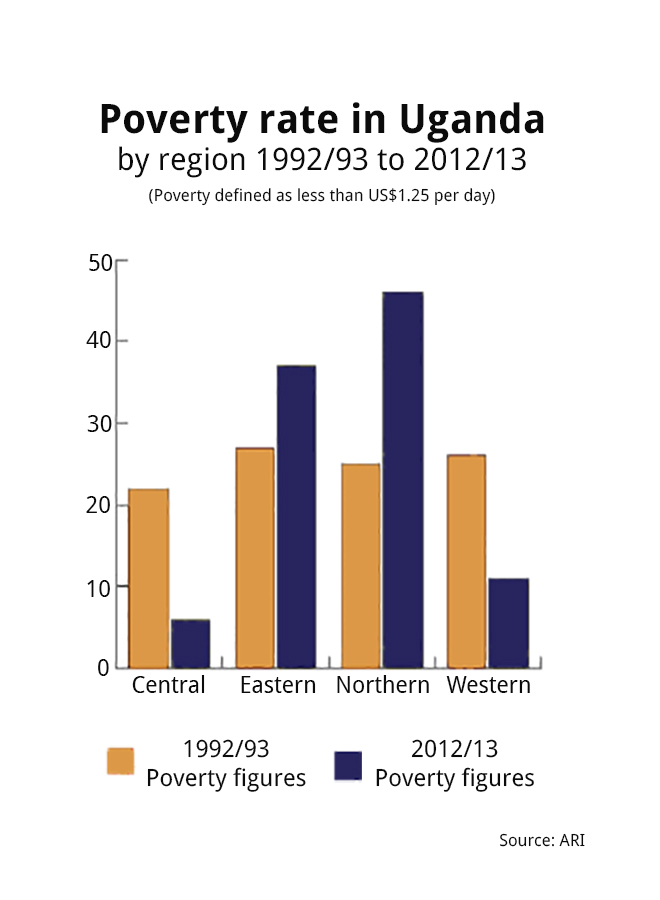 Critics point to the lack of citizen engagement in the design of the plans as a problem. “We saw what was done but not our will was done” was a sentiment captured by a Refugee Law Project report in 2013.

Corruption has also hampered the success of rehabilitation efforts. In 2012, Uganda’s auditor general discovered $12.7 million had been misappropriated by staff in the office of the prime minister; money that was earmarked to develop areas affected by the conflict.

When money did flow to the districts and projects, complaints from local government officials were that the disbursements were delayed, and that the money eventually received was less than promised.

Finally, and linked to the lack of consultation, the absence of compensation for victims who had property, land, or cattle stolen during conflict continues to be a bone of contention.

That’s especially the case when they saw the way the government acted quickly to offer financial support to those affected by the 2010 al-Shabab bombing in Kampala, and the continued support received by people in the Luwero triangle – the NRM’s base of operations when it fought the northern-supported government of Milton Obote in the 1980s.

A lack of strong political voice in government has also hampered development in the northern region. In the current list of 81 cabinet members and ministers of state only 17 percent of positions are held by representatives from northern constituencies and districts.

Coupled with this is the fact that Museveni has increasingly come to rely heavily on a network of more than 150 special advisers, many of whom are more interested in serving their own patronage networks in southern and western parts of the country than seriously addressing national development challenges.

In a speech to attendees of the Uganda Solidarity Summit on Refugees in June, Museveni spoke of how “the hosting districts should be rewarded” but asked international donors to provide that support in expediting the building of roads, saying that the Ugandan government will “eventually do these”. But the last three decades point to the need for more action and less promises in the region.

So far northern Uganda has adapted remarkably to the arrival of hundreds of thousands of refugees, and the accompanying pressures. Perhaps communities recalling their own very recent experiences of displacement have been sympathetic to the plight of South Sudanese refugees.

But if the Ugandan government is serious about providing more permanent refuge to those fleeing conflict in neighbouring countries it cannot ignore the underlying development needs in the north.

Better schools, hospitals, and roads are needed, but so too, and perhaps more importantly, is meaningful dialogue with citizens to find solutions that are not imposed but developed in partnership with them. Northern Uganda has, for too long, been pushed to the periphery of government thinking: It’s time for that to change.