A 66-old Iraqi Kurdish woman and her six-year old grandson were burnt to death on Thursday night when a cooking gas canister exploded in their tent at Moria camp on the Greek island of Lesvos. The boy’s mother and his four-year-old brother, who were in the next tent, suffered severe burns. The fire was quickly put out, but as the camp was evacuated, some of the refugees started fires in their wake that caused widespread destruction.

As the winter cold begins to bite and many of the 16,000 migrants and refugees stranded on the Greek islands continue to be housed in temporary shelters, more fires are inevitable. Some will be the result of the migrants trying to keep warm or cook in their tents. Others will be set deliberately in a desperate act of protest.

Fires at Moria, usually the result of riots, have become frequent since the implementation of the EU-Turkey deal in March. The agreement envisaged that migrants arriving to the Greek islands would be briefly detained until they could be processed and returned to Turkey, given asylum in Greece, or relocated elsewhere in Europe. In reality, few migrants have left Lesvos. Most are still waiting for their asylum claims to be processed, even as small numbers continue to arrive.

The capacity of Moria is 2,000 people, but the camp now has around 4,500 residents. Other facilities on the island host another 1,500. Several other Aegean islands are experiencing similar levels of overcrowding and an increasingly tense atmosphere. Violent clashes between refugees and locals also broke out recently on Chios.

Several refugees I spoke to on Thursday night after the deadly fire asked me the same question: “Will this help open the borders?” But the European policies that keep them on the islands are not determined by humanitarian considerations. They are driven by a desire to keep the migrants as far from the centre of Europe as possible. And Lesvos is at one of the furthest corners of Europe. 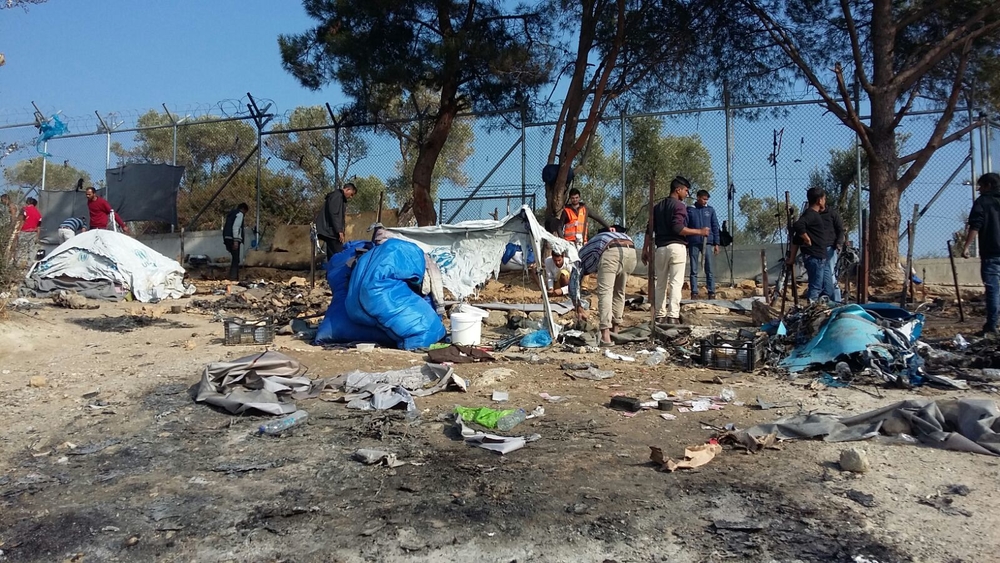 Fotini Rantsiou/IRIN
The morning after the fire at Moria camp, refugees sift through the charred remains of their belongings

Meanwhile, local residents feel increasingly threatened. Cases of petty theft and other crimes have risen in line with the numbers of asylum seekers. On Lesvos, refugees now make up more than 20 percent of people in Mytilene, the capital city where the camps are located. In Chios town, they represent 13 percent of the population, on Samos 38 percent.

The Greek Asylum Service has been wrongly blamed for the overcrowding. But it has been processing cases at a rate no slower than other European countries. According to its director, the service has tripled in size since its inception in 2013 and is handling six times more asylum applications in 2016 than previously. Little support from other European countries has been forthcoming. Member states sent only 35 of the 400 experts requested by the European Asylum Support Office.

A lack of funding is also not the problem. The EU, through its department of home affairs and migration, has committed a total of €248 million to the government over the past year (through long-term and emergency contributions) and another €175 million to humanitarian partners, including the UN’s refugee agency, UNHCR, the International Organization for Migration, and various NGOs. Since April 2016, another €198 million has been channelled through the European Commission's emergency aid department, ECHO.

All of these funds are available to improve living conditions, both on the islands and for some 46,000 refugees stranded at various camps on the mainland. Better coordination and trust between the government and humanitarian partners would greatly help, but the real issue keeping refugees on the islands isn’t money or bureaucracy. It’s a lack of solidarity from the other EU member states that over the past year have closed their borders and backtracked on commitments to relocate asylum seekers from Greece and Italy. Instead, Greece – where a total of 62,000 migrants and refugees are now stranded – has been left to deal with the consequences of bad decisions made in Brussels.

Even as Turkish President Recep Tayyip Erdogan openly threatens to end Turkey’s migration deal with the EU, the Greek government is keeping it alive by insisting that refugees must remain on the islands. The morning after the deaths at Moria, the minister for migration reiterated in parliament that no transfers to the mainland would take place, despite repeated requests by the islands’ mayors.

Talking to government officials, humanitarian actors and local residents, whether in Lesvos, Chios, Athens or Thessaloniki, one thing is clear: urgent advocacy is needed, in Brussels and in EU member state capitals, to overturn EU policies that are keeping people hostage in Greece – a country that because of an accident of geography has become a frontline state for Europe’s refugee “crisis”, and at one of the most difficult economic times in its post-war history.

Australia has been roundly and rightly condemned for its policy of processing asylum seekers at remote offshore detention centres like the one on the tiny island nation of Nauru. Allowing the Greek islands to become Europe’s Nauru is an inhumane solution that should put us to shame as European citizens.

(TOP PHOTO: At the peak of last year's arrivals to Lesvos, non-Syrians waited up to five days to register at Moria Camp but were then free to travel onwards to the Greek mainland and Western Europe. Jodi Hilton/IRIN)