Near the Evros River border between Turkey and Greece, which became a popular migration crossing point in 2018, officials have recorded a sharp increase in migrant and asylum seeker deaths from traffic accidents. And more than a quarter of all migrant deaths in mainland Europe in 2018 were due to road accidents in Greece, according to UN figures.

Pavlos Pavlidis, a forensic scientist based in Alexandroupoli, Greece, whose sole responsibility is identifying dead migrants and asylum seekers, told IRIN that by mid-December he had already seen dead bodies from nine traffic accidents in 2018, up from two car crashes in 2017.

It’s not entirely clear what’s behind the growing trend, but both reckless practices by human smugglers and attempts to avoid arrest and return to Turkey are possible causes.

Greece itself has the highest rate of road fatalities in the European Union, at 69 deaths for every one million inhabitants in 2017.

But for migrants, the roads are even more dangerous. According to statistics from the UN’s International Organization for Migration, 30 migrants died and 82 were injured in road accidents in Greece last year, out of the nearly 48,000 migrants who arrived in the country, 15,814 via Evros. The IOM recorded 109 migrant deaths in all of Europe in 2018. 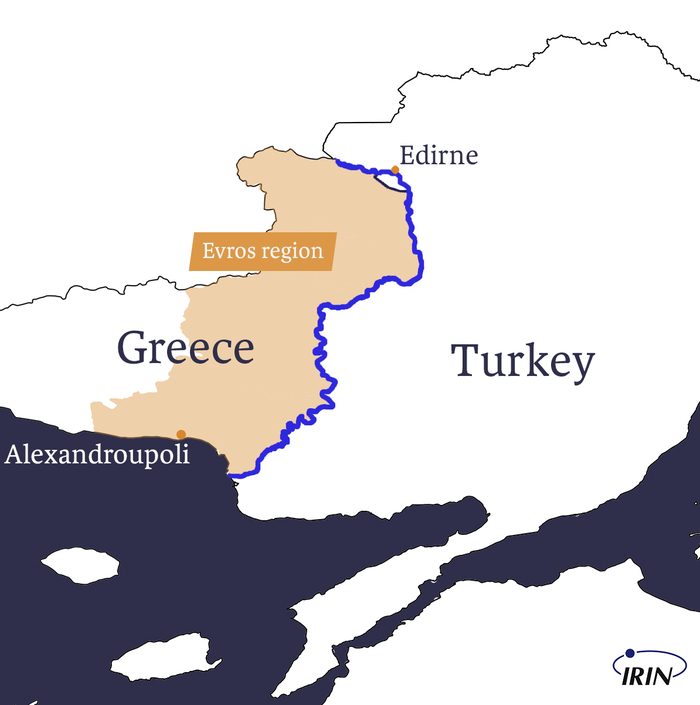 Most of the crashes take place on Greece’s Egnatia Odos highway, a €5.93 billion project that stretches from the Ionian Sea to the Turkish frontier, and was designed to be faster and safer than the roads it replaced when it was finalised in 2009.

Dimitris Koros, a lawyer with the Greek Council for Refugees, told IRIN that attempts to avoid capture may encourage dangerous practices: “As [migrants] know that the more deep in the mainland they enter, the less possible it is for them to be pushed back, it makes their driving that much more reckless,” he said. IOM reports that nearly every accident occurs after a high-speed car chase with a police vehicle.

Human smuggling is a business where corners are regularly cut, and Greece is no exception. In Evros, migrants are loaded into cars or vans beyond capacity. IOM reports that smugglers usually arrange for unaccompanied foreign minors already living in Greece to drive – the idea being that underage drivers won’t get jail time. Other times, migrants are forced to drive themselves. In either case, drivers are likely overwhelmed, unfamiliar with the terrain, and afraid of the authorities.

As IRIN has reported, in April 2018 the Evros River (known as the Meriç in Turkey) saw a resurgence in migrants and asylum seekers crossing into Europe, leaving first responders, police, and aid workers both unprepared and overwhelmed.

That month, 3,600 people crossed at Evros, surpassing sea arrivals to Greece for the first time since 2014. Numbers have since dropped – the Hellenic Police report 1,848 people crossing in October and 1,025 in November – but they are still significantly up on 2017.

A string of high-profile accidents began shortly after the uptick in arrivals last year. On 8 June, a van carrying 17 Iranian migrants flew over the Egnatia Odos’ protective barrier, leaving six dead, among them three children. Later that month, on 27 June, a sedan packed with 10 Syrians and Iraqis (including two children) lost control on the highway, killing three people and injuring the rest. The mother of the children died at the Alexandroupoli hospital later that day.

The pressure on those arriving is intense. Both Human Rights Watch and the Greek Council of Refugees have found a clear pattern of police (or groups wearing paramilitary clothing) speaking in Greek and other foreign languages forcibly returning migrants across the Evros border to Turkey.

Migrants and smugglers – usually hoping to reach Thessaloniki or Athens before moving elsewhere in Europe – know that the chance of reaching their final destination increases the further they go into the Greek mainland. “I used to breathe a sigh of relief when I saw signs for Kavala [a city some 200 kilometres southwest of Evros],” a former migrant smuggler who requested anonymity told IRIN in June.

Whatever the causes of the individual crashes, deaths are stacking up.

On 13 October, police chased a van full of migrants near Kavala, leading the van to crash head on with a truck. All 11 migrants stuffed inside were burned alive, charred beyond recognition. One month later, a migrant van again collided with a truck, injuring 27 people and killing a four-year old Iraqi boy.

Most recently, on 13 December, a driver ignored warning signs to slow down due to an overturned lorry; he lost control of the vehicle and three migrants died. Another three survived with injuries.

(TOP PHOTO: A group of Syrians who have just crossed the Evros River from Turkey to Greece. CREDIT: Socrates Baltagiannis/UNHCR)