Every Friday, IRIN’s team of specialist editors offers a roundup of humanitarian trends and developments from around the globe.

A month ago, we offered an early warning that the mild winter in Afghanistan could trigger water shortages. Drought has now hit two thirds of the country, aid agencies say, and one million people may need emergency assistance. The governor of Bamyan Province, west of Kabul, has urged the government to prepare help for 50,000 people. Farther west, almost 3,000 people reportedly abandoned their homes in Herat because they ran out of food when their fields dried up. In provinces like Nimruz, Helmand, Jawzjan, and Badghis, 30 percent of water sources may be on the verge of drying up. By the end of the year, aid groups estimate, more than 120,000 acutely malnourished children may need “life-saving emergency nutrition services.” And the UN warns that while one million people may be at risk, current funding only covers food for 90,000 people for two months. This will have knock-on effects: dry fields mean fewer jobs, and fewer jobs could push people to migrate to places like Pakistan, Iran, and further afield – just at a time when these countries are looking to send Afghans home.

The White Helmets, a Western-funded Syrian civil defence group, and Syria’s alleged chemical attacks have become battlegrounds for duelling online communities — few of whom appear to be Syrian. A new study finds that allegations hostile to the White Helmets were amplified by a consortium of online publishers sharing multiple versions of the same articles. The "central hub" was 21st Century Wire, a London-registered domain operated by Patrick Henningsen. Sharing and remixing the same material produced an "echo-chamber" that commanded a significant proportion of mentions of the group on Twitter. The research, led by Kate Starbird of the University of Washington, looked at over 130,000 tweets in mid-2017 and spotlights the techniques used in a poisonous information war that parallels the conflict. Researchers also analysed some 3,000 article pages mentioning the White Helmets, then checked how many showed a textual similarity of 85% or more. Conventional media were found to share the same material much less often (although they did re-use material from the  Associated Press newswire) than the anti-White Helmet grouping, which showed much more "circular citation" and reposting. The effect, the report says is "astroturfing" the counter-narrative across sites with apparently different leanings: "these websites are publishing the same content, but inside very different wrappers".  Despite the positive mainstream and Western media view of the White Helmets, and the work of volunteer and open-source groups analysing videos and photos from the war (exemplified by Bellingcat), one of the oldest rules of propaganda seems to be at work: repetition. Anyone who has dived into the Syrian online commentary recently might agree with the researchers, especially since the latest chlorine attack in Douma: "This information space can be intensely disorienting." 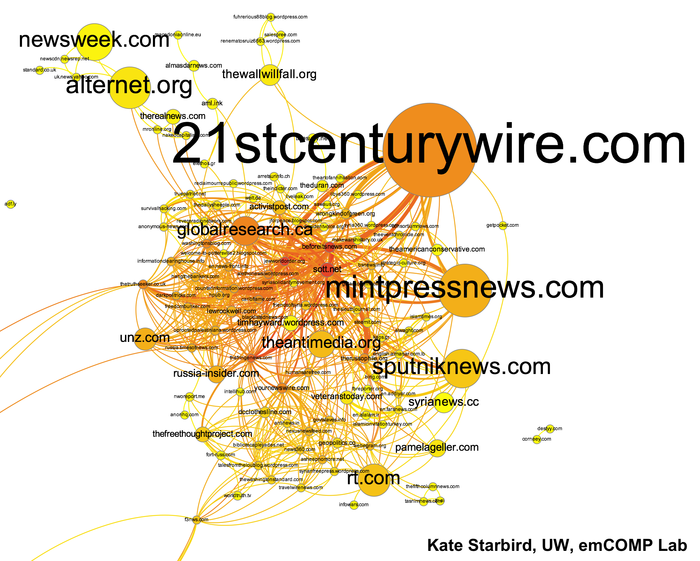 Lebanon will hold its first general elections in nine years on 6 May, and some politicians are ramping up rhetoric against nearly one million registered Syrian refugees, blaming them for a variety of social ills and suggesting it’s time they head home. Such hostility is nothing new (check out our reporting from 2016) nor is it specific to Lebanon — Turkish politicians have also started talking about return. But the rhetoric in Lebanon is now more than just talk: last week 500 Syrians in Lebanon boarded buses to the border, their transport apparently organised by Lebanese authorities. Human Rights Watch, which just released a report documenting mass evictions of Syrians by local Lebanese municipalities, says the increasing pressure on refugees to leave is coming from politicians, police, and neighbours. Popular culture is pitching in, too: a Lebanese TV station is under fire for airing a song and music video that mocks Syrians, including the lyrics: “We’ve become foreigners and they are the majority”.

Hidden agendas in the Sahel

As we detailed in January, a plethora of international military forces can be found in the Sahel region, including forces from the UN, the United States, the EU, France, Germany, and Italy. Over recent years these Western forces have evolved from merely advising, training, and equipping national armies to deploying active ground troops and establishing bases. Ostensibly, their main role is to counter the threat posed by a growing range of violent extremist groups. But, according to a paper published today by the Institute for Security Studies, these “external interventions may be more about self-interest”. Although the various players tend to sing from the same counter-terrorism hymn sheet, “Western powers seem to have different agendas”. Germany and Italy, the paper stated, appear to be more motivated by the control of immigration. Niger is a major transit country for Africans who arrived in Europe last year. Meanwhile, France’s intervention in Mali in 2013, mounted at Bamako’s request after extremists took over the north of the country, served more to “defend its strategic and economic interests”, such as uranium deposits in neighbouring Niger – to where France’s military presence (alongside Burkina Faso’s, Mauritania’s, and Chad’s) has expanded under the $1 million-a-day Operation Barkhane. The Sahel’s citizens are growing wiser to these hidden agendas. Protesters in Niger recently demonstrated to a chant of: “French, American and German armies, go away!”

Negotiators are set to meet again in Bonn beginning 30 April – an intermediary but crucial step in determining whether countries can live up to climate pledges made under the 2015 Paris Agreement. The headlines of that accord were commitments to limit global temperature rise to “well below” 2 degrees Celsius and to raise $100 billion a year by 2020 to help the hardest-hit, poorer nations. But just how to achieve these aims was never spelt out. The major focus of the upcoming meetings: piece together a draft “rulebook” to govern how countries implement their Paris pledges in the coming years. Pacific Island nations will be watching closely, particularly when it comes to thorny matters like accessing climate financing. Fiji, which, rather symbolically, held the presidency during the November 2017 climate summit, COP23, was hit twice by cyclones in quick succession earlier this year. It and other smaller nations will be pushing for progress on the key issue of compensation for climate-caused loss and damages.

At publication, the fate of a convoy of 10 South Sudanese aid workers who went missing on Wednesday in the south of the country was unknown. What is clear is that aid workers are often targeted by the proliferation of armed groups in the fast-fragmenting civil war. According to a recent report by the Watchlist on Children and Armed Conflict, at least 50 attacks on medical facilities and personnel occurred between January 2016 and December 2017. Since the start of the current war in 2013, at least 101 aid workers have been killed, including two announced today by emergency relief organisation Medair. On its own, bad enough. But these attacks also do untold damage to efforts to assist millions of people, many of them badly sick, wounded, or starving. Our weekend read, For medical workers in South Sudan’s war, just reaching the sick is a challenge, explores the many obstacles to aid access. Yes, insecurity is part of it, but, as regular IRIN contributor Stephanie Glinski explains, so are political dysfunction, funding, and, more fundamentally, the weather. Much of the lifesaving in South Sudan has to be done via plane, as the roads are often impassable, and in the May-November wet season even the planes can’t get to many places, making space on the occasional flights even scarcer. As trauma surgeon Markus Küper explains, this can make for tough choices: “When there are a number of injured people, we usually evacuate those who have a good chance at survival. If chances of survival are very slim, we might not be able to evacuate.”

Medair is deeply saddened to confirm the death of two of its locally recruited staff in separate incidents in Leer County, #SouthSudan on April 26, 2018. Our statement: https://t.co/nWRQke3uX9

We’ve just finished listening to Radiolab’s “Border Trilogy,” in which the podcast takes an in-depth look at “Prevention through Deterrence”, a Clinton-era policy that sealed off major entry points on the US-Mexico border, funnelling migrants trying to reach the United States into the harsh Sonoran Desert and eventually causing a spike in deaths. This is not an easy listen, but people continue to die at the border – 68 so far this year, and 415 in 2017 – so it’s an important one.