The Guaire River, a stinking open sewer that runs through the heart of Caracas, is where Augusto Rengil makes his living, alongside groups of other young, jobless men.

There may be nothing alive in the nauseating brown water except bacteria and microbes, but “you’ll be surprised by how many jewels go down the drain and end in the sewer,” says Rengil.

Wading knee-deep, he sieves the swirling water with a net and dumps the mess he finds on the bank to be picked through with the blade of a knife for anything of value. 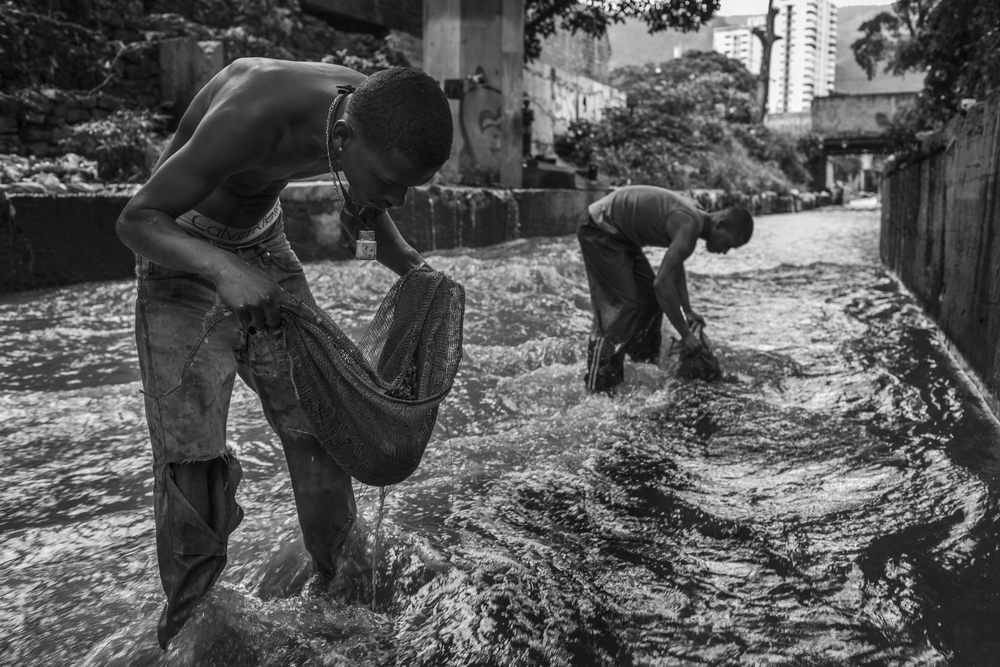 “We chose this part of the river because it has easier access and it isn’t too deep,” he explains. “We usually work in a group. We are five people, and what we get is shared among all of us.”

In a country mired in an economic and humanitarian crisis, Venezuela’s poor are increasingly surviving solely on what others throw away.

“We mainly find earrings and chains,” says Augusto, 21, who has been working in the Guaire River for four years, supporting his wife and child.

He opens up his palm to proudly show what he thinks is roughly 1.2 grams of metal.

Gold fetches the equivalent of roughly $23 per gram – the average haul after five or six hours of back-breaking work, he says.

That is good money when the minimum monthly wage is $31.

But in a country with a dizzying rate of inflation caused by fluctuating oil prices and failed economic policies – first under the late president Hugo Chávez and now his successor, Nicolás Maduro – that doesn’t buy much.

A loaf of bread costs the equivalent of just over a dollar, and a kilo of meat roughly a third of the minimum wage.

Working the river that flows close to the Palacio de Miraflores, the seat of government, may be profitable – but it’s not for the faint-hearted.

“The smell here is unbearable and you can never get rid of it,” says Vladimir Pérez, 25. “Skin infections are very common, as well as gastroenteritis when you swallow some water.

“But the most dangerous thing is when the river suddenly rises because of the rain – then you can be dragged under and drown.” 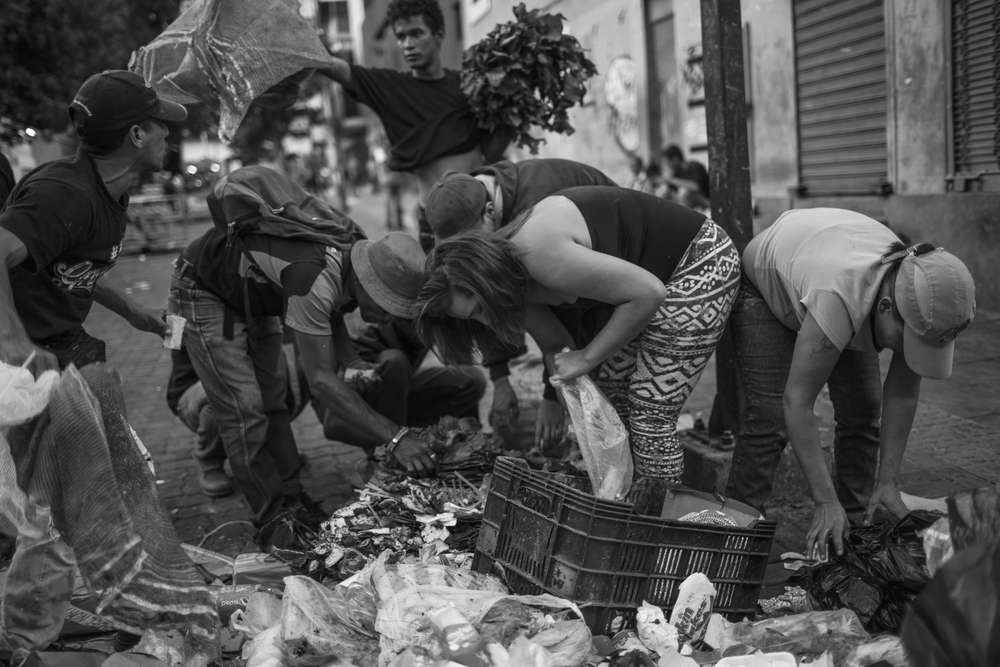 JM Lopez
A group of citizens are looking for food in the trash at dusk.
The Francisco Fajardo highway passes close to the Guaire and is the ideological fault line of the city.

The western side of the highway is pro-government, the home of state institutions, the city centre, and the poorest neighborhoods of Caracas – a solid Chavista base.

To the east are the headquarters of the banks, big business, and the residential areas that are the heart of the opposition that battled Chavez throughout his presidency, until his death in office in 2013.

Their supporters are now on the streets to daily protest Maduro’s keeping faith with the leftist “Bolivarian revolution” of his predecessor, and the naked attempt to cling on to power.

In the late afternoon, when the supermarkets and malls in the eastern districts start to throw away their expired food and the leftovers from the restaurants, people begin to gather around the trash bins.

“I know the quality of the food by its smell and colour,” says Adriana as she sorts through pieces of discarded fruit and a roast chicken.

Her friend holds a one-and-a-half-year-old baby. Its skin is covered in scabs, symptomatic of poor hygiene and malnutrition.

“This country used to be very rich; now we are very poor,” says one man as he eats a salvaged chocolate cake, still in its packaging. 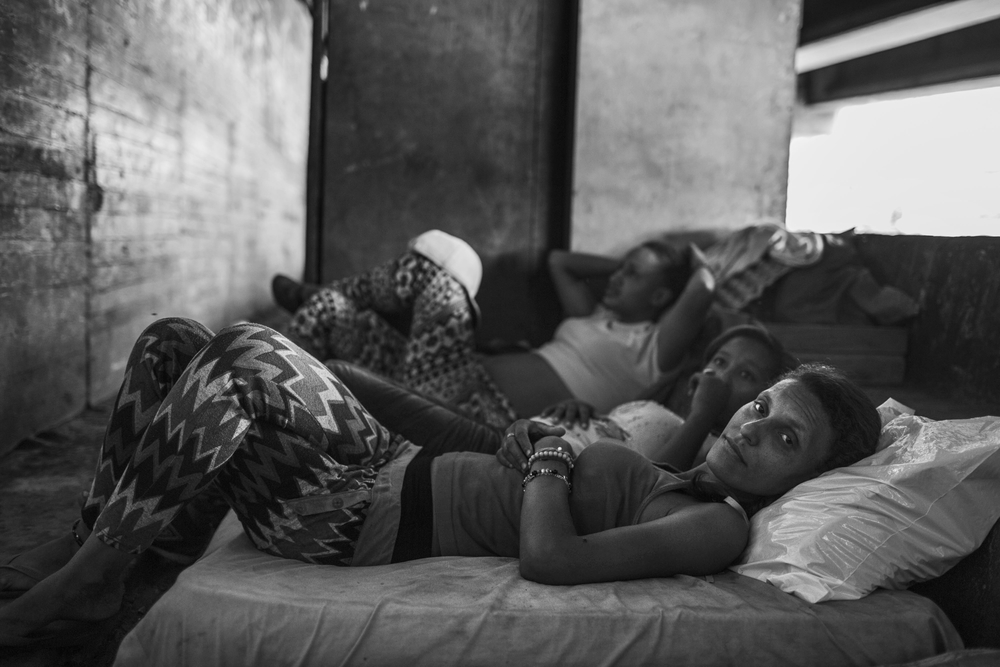 JM Lopez/IRIN
Zaida lives with four other people inside a bridge section under the Francisco Fajardo highway
To fight shortages and the booming black market, the government created the Local Committee of Supply and Production to distribute basic necessities in what was once the region’s economic powerhouse.

The idea is that everyone should have a ration of rice, corn flour, and oil, with priority given to the poorest.

But that safety net doesn’t apply to people like Adriana and her friend with the infant. They live on the streets and so are unregistered.

The system is also undermined by corruption and arbitrary distribution, as well as the poor quantity of the food provided.

The bottom line is that hardship no longer differentiates between chavistas and opposition supporters. Venezuelans are increasingly united in their poverty.

“I live in the street now, but I still visit my family. I left them because I didn’t want to be a burden,” says El Blanquito, a 23-year-old man who doesn’t want to give his real name.

“Three years ago everything was cheaper – there were more jobs, good salaries,” he says with nostalgia.

“There are women with two and three kids [living on the streets]. I can barely take care of myself, how [do they]?” 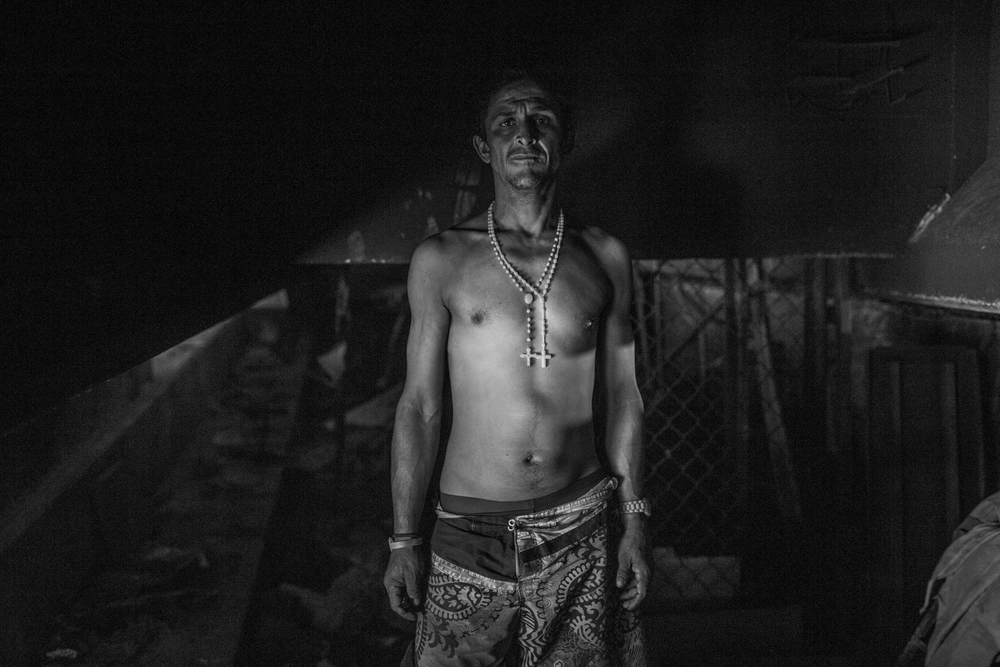 “All we get comes from garbage,” says Germán as he stirs the stew. “We are six people living here and we do not let anyone else here.”

It wasn’t always like this for Germán. “I used to live down there, by the river. I had a kitchen and a woman. I could have a bath… “

The noise of cars crossing overhead is constant and the air full of exhaust fumes. Reaching Germán’s shelter requires climbing one of the bridge pylons next to the river, and then a bit of acrobatics to swing into a concrete cavity under the bridge.

Life is exceptionally tough out on the streets.

“El Blanquito hasn’t come today,” Germán says as he points to a trail of blood by the river bank. “It seems that he stabbed a man here yesterday and the police might be looking for him.”

Venezuela’s crisis is more than just humanitarian. Violence goes hand-in-hand with hardship as the underpinnings of state and society erode.

Much of the shocking homicide rate – Caracas is rated the most violent city in the world by some researchers – has to do with organised crime or simple score-settling.

Either way, it’s in the Guaire River where many of the victims end up. 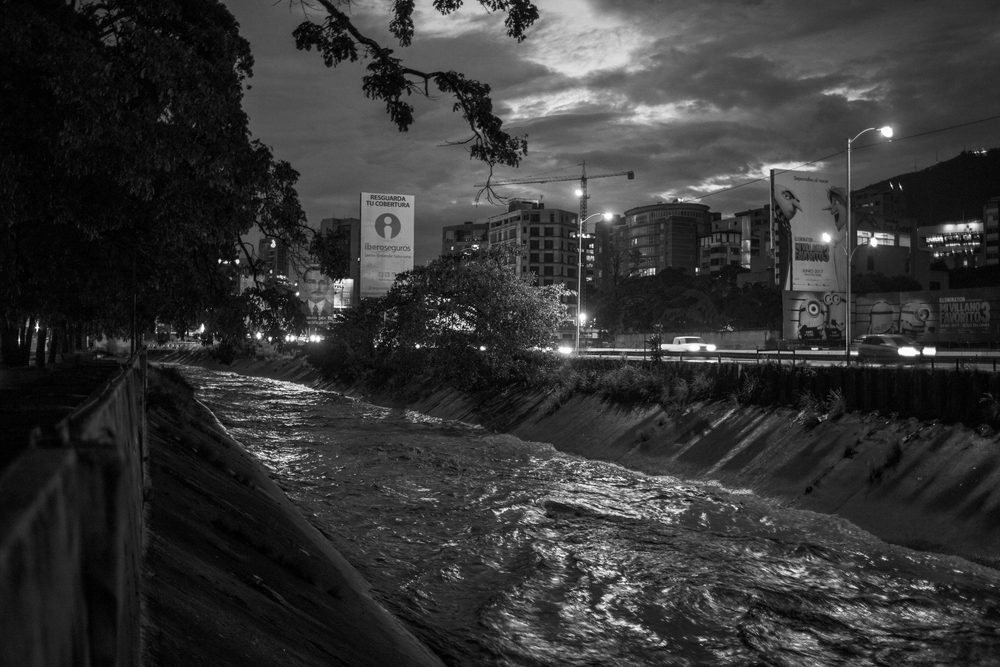 JM Lopez/IRIN
View of the Guaire River at dusk in Caracas.
jml/oa/ag
Share this article
Join the discussion