Read about what we achieved.
Rhino settlement, UGANDA

For leverage, Helen grips the rungs on the side of the rusting hospital bed with her toes. “Sindika!” encourages Aisha Ayikoriu. “Sindika! Sindika!” In Luganda, the Bantu language widely spoken in Uganda, Sindika means “push”.

Built in the early 1990s to serve 10,000 local Ugandans, Ocea Centre Two is now the biggest of four clinics serving Rhino, a settlement of some 85,000 South Sudanese refugees.

As the UN makes repeated statements about ethnic cleansing and budding genocide in South Sudan, Uganda can barely open camps fast enough to accommodate the influx of refugees. An average of 2,500 have been arriving every day since July, with that figure as high as 7,000 earlier this month. A massive settlement for 100,000 has just opened in Moyo district in the tip of the north. With dry season offensives expected to begin any day now, it could be overflowing before mid-January.

In its most recent update, on 19 December, the UN’s refugee agency, UNHCR, says 584,573 South Sudanese refugees have arrived in Uganda since the civil war broke out in December 2013. Almost 400,000 of them have come since July, fleeing an upsurge in fighting and indiscriminate bloodletting in the southern Equatoria region.

South Sudan: "This fighting will continue to our children"

The lack of resources for the refugees is evident. There isn’t enough water, let alone sanitary pads for women, and schools for children. It may be safer in Uganda, but the conditions here are inhumane.

At Ocea Centre Two, there are two beds for women in labour. On the other side of the green fabric that serves as a curtain are five mothers with newborns. They share cots and use cloths to cushion themselves and their little ones on the concrete floor. Mothers fuss over the babies. Though the situation is grim, the scene isn’t sad.

The “inpatient” unit is 14 beds in a tent. It is the only clinic at Rhino equipped to do minor surgical procedures. The beds in the tent are always full and often overrun, with patients sharing beds or staying on the floor.

For any major operations, patients must be sent to the nearest hospital, 72 nauseatingly bumpy kilometres to the west, in Arua, the closest main town. There is only one ambulance available. Vincent Debo, a clinical officer, looks embarrassed when he shares these statistics.

The fight that has ruined the world’s newest nation turned three on 15 December. South Sudan itself is just five, having celebrated its independence in July 2011.

The conflict is an ethnically tinged power wrangle between the SPLA (government forces made up mostly of President Salva Kiir’s Dinka tribe) and the SPLA-IO (opposition forces – initially mostly Nuer people loyal to former vice president Riek Machar, but now increasingly mixed with members of South Sudan’s 63 other tribes).

Equatoria had remained a bastion of relative calm while war over resources and power infected the rest of the country, but the seat of the conflict has shifted. A failed, internationally-brokered August 2015 peace agreement positioned IO troops alongside the SPLA in these states, priming the place for a bloodbath. In July, fighting broke out in the capital Juba, located in the south, in the middle of the Equatoria region. A chase down country for the ousted Machar was followed by massacres that have yet to stop. 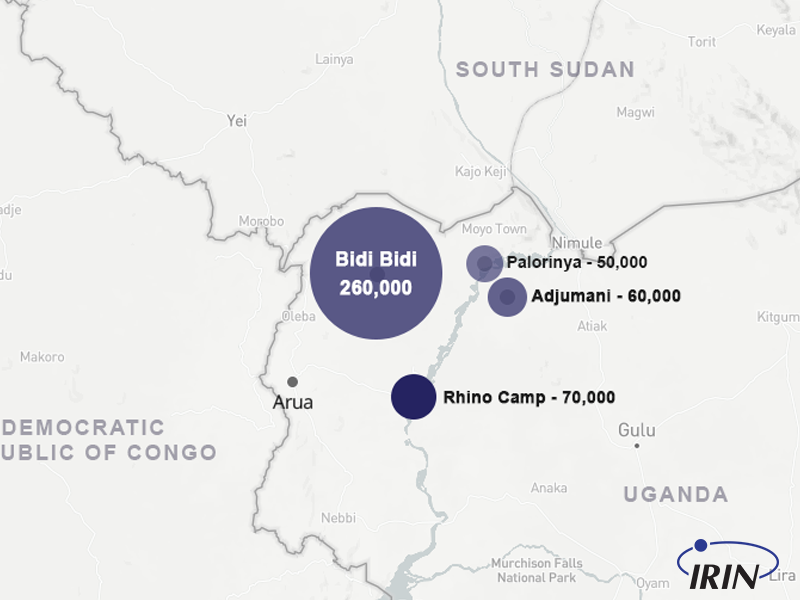 Refugees from Equatoria say they left because staying at home was untenable. If it weren’t for the gunshots every night, the bodies in the streets, the families burned alive in their homes, and the women gang raped by the side of the road, they would have stayed.

“Fear made me come here,” Peter Dada, originally from Laniya in central Equatoria, tells IRIN at Rhino settlement. “There is killing, continuously. No compromise.”

Most refugees say both sides are complicit in the sexual assault that has reached “epic” levels in South Sudan.

It is less violent across the border, but the living conditions are dreadful.

The largest encampment in Uganda opened on 3 August, at Bidi Bidi. A small village a few months ago, it is now the world’s second largest refugee settlement, with a population of more than 260,000. Like Rhino, it is spread out across unforgiving terrain.

The majority of the refugees at Bidi Bidi and Rhino are from a mixture of South Sudan’s smaller, marginalised tribes, like the Kakwa and the Acholi. In the northeast of Uganda, the settlement at Adjumani hosts another 60,000 South Sudanese, but they are mostly of Kiir’s Dinka tribe.

Robert Baryamwesiga, Bidi Bidi’s camp commandant, says the biggest challenge is water. There are 70 boreholes on the sprawling 250-square-kilometre property. Sixty-five percent of the water is trucked in from the Nile. Each refugee has about eight litres a day for drinking, washing, cooking, and bathing. The World Health Organization recommends that 15 litres a day is needed for survival: drinking and cooking.

"Every day, more refugees were arriving than new boreholes could be drilled to supply them water,” said Harmen van den Berg, a hydrogeologist with UNHCR.

Jean-Luc Anglade, the country representative for Médecins Sans Frontières in Uganda, explained that a substantial amount of money is being spent exploring the groundwater in Bidi Bidi. Normally, a hydrogeology survey is completed before a plot of land is selected for a refugee settlement. In this case, it’s ongoing, after the camp is already full. “The water supply is too low in terms of quality/quantity delivered despite lots of efforts from partners,” Anglade told IRIN by email.

The water situation at Rhino isn’t any better.

Grace Ropani says it takes two or three people to “farm” the water. Pumping from the boreholes is exhausting, and can take two hours.

Ropani’s grandmother was macheted to death on 5 August. She didn’t see it happen; her neighbours gave her the news. “Here, we don’t hear the sound of guns,” she says of life in Rhino camp. Unlike others, Ropani isn’t concerned about the food supply, but she does need soap and salt, and she says the women need sanitary pads and underwear.

Yasmin Abdayy was elected by the Rhino refugee community to be an unpaid watchman for Oxfam’s water tank 171. As a truck pumps 20,000 litres into the tank, Abdayy keeps an eye on the line forming at the spouts. Everything is orderly, except the boys who dangle the truck’s dribbling hose into their containers to get every drop.

According to Abdayy’s calculations, each family gets two jerry cans’ full, about 40 litres, each day. Going by the WHO standards of 15 litres per person as the basic emergency level, a family of five would needs 75 litres to survive. Abdayy says there is just half the water needed. What he really wants is simply a notebook and a pen to keep track of the situation, so he can do his job correctly.

In August, the World Food Programme cut rations by 50 percent for all refugees who had been in Uganda before July 2015. Now, the organisation faces a funding shortfall of $62 million for all refugee operations in the country for the next six months. If this is not met, WFP will be forced to cut the quota for new arrivals as well. Even though they are allegedly getting the requisite amount of food, the majority of newly arrived refugees, including Abdayy and Dada in Rhino settlement, speak of hunger and say they don’t have enough to eat.

It is 1pm, and neither Abdayy nor his five children have eaten. “The food is finished,” he says, adding that his family won’t eat that day unless he can find a way to do some small paid labor, or perhaps make a trade. Other refugees spoke of exchanging supplies like pots for food.

Some aid organisations attribute the lack of schools, health services, food, and water to the scale of the influx. But Shoshon Tama-Sweet, Africa and Middle East programme manager with Medical Teams International (MTI), finds that rationale lacking.

“They [UN and NGOs] prepared for 700,000 refugees before the Mosul offensive [in Iraq],” he told IRIN. “South Sudan has been at war since 2013. The refugees started flooding Uganda in July. They used surprise as an explanation for lack of preparation. Now, it's December. They still can't be surprised. We're running to stand still.”

Speaking again to the relativism other aid staffers apply to explain conditions, Tama-Sweet said: “You can't say: 'Well, they wouldn't have water in South Sudan either.' In South Sudan, they had community coping mechanisms, they knew the land. This isn't the same thing."

Back at Ocea Centre Two in Rhino settlement, Ayikoriu, the midwife, is giving instructions.

Helen is 25. This is her first child. She purses her lips and screws up her eyes in painful effort, but she doesn’t make much noise.

She hasn’t taken any pain medication. Lili Aya, the birth attendant, and Ayikoriu shift Helen into the most comfortable position; first draping her arm over her back and moving her onto her side, then holding her neck and massaging her breasts and belly. Helen’s only cover is a limp plaid blanket. It’s a physical process; the women are comfortable with each other.

Beads of sweat form on Helen’s lips. The room smells vaguely of hay. Ayikoriu advises her patient to push like she’s trying to go to the bathroom. “She’s putting her effort here,” Ayikoriu says, indicating her neck. “I’m telling her to push down.”

Ayikoriu ties a rubber glove around Helen’s arm. She’s found they make perfect tourniquets. She gives Helen an intravenous drip of glucose for energy, and some oxytocin to speed up her slowing contractions.

Now, Helen is not contracting at all. A clinical officer calls the ambulance. It’s time to take Helen to the hospital. Ayikoriu is not worried about Helen’s health, but she is concerned the baby will suffocate. The ambulance is already on its way to the hospital with someone else. It will be hours before it can come back for Helen.