“This should be tremendous, deep. There should be karachi fish and silverside in here,” says Abdon Choque Flores, pointing to a shoulder-high tide mark on the long road bridge that crosses the Desaguadero River in Bolivia’s drought-hit Oruro department.

High on the Andean plateau, the Desaguadero used to connect vast Lake Titicaca with smaller Lake Poopó. But the second lake dried up in late 2015 and there is now so little water in the river that the stretch beneath the bridge is completely dry.

Flores lives in nearby Puñaka, a community of Uru people who traditionally made their living on Lake Poopó, fishing and hunting water birds for their meat and eggs. Now, the village looks across an expansive, white plain that stretches as far as the eye can see.

With the Urus' main source of food gone, along with the lake, many in the community have been forced to leave to find work in nearby towns. The government is providing those left behind with food aid, but it doesn't come close to plugging the gap. Flores says they chew coca to suppress their appetite.

Lake Poopó was once Bolivia’s second largest lake, after Titicaca. Climate change has melted the Andean glaciers that fed the lake. Water from its tributaries has been diverted for mining and agriculture. But it was the country’s worst drought in 25 years that dried it up completely.

The El Niño phenomenon brought severe weather including flooding and drought to many parts of Central and Southern America in 2015 and early 2016, but most countries have started to recover. In Bolivia, however, the drought has worsened, causing the government to declare a nationwide state of emergency in November. Water is being rationed in large cities such as La Paz and El Alto, but it is remote, rural populations that rely on fishing and agriculture for livelihoods that have been hardest hit. The ministry of civil defence estimates that more than 177,000 families in rural areas have been affected. 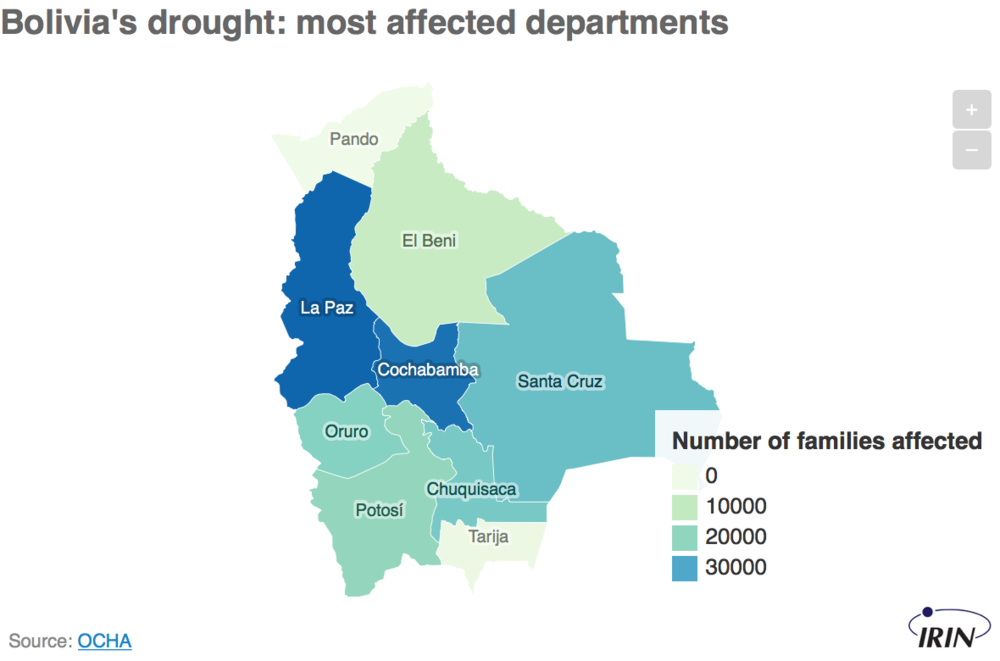 Choque Flores' family has a small greenhouse made from adobe walls and clear tarpaulin where they grow tomatoes for their own consumption. But the tomatoes are small and shrivelled, the vines half brown.

Beyond the garden wall is a small well, a little over a foot across and seven metres deep. The drought means the family must dig a well like this once a month to meet their water needs. “We could use this water to water the tomatoes, but then there would be none left for us,” said Choque Flores.

Even before the drought, Oruro department had high rates of poverty and food insecurity, according to Elisabeth Faure, the World Food Programme’s country director for Bolivia. “It’s a remote area, at very high altitude,” she told IRIN.

WFP launched an emergency operation to support 40,000 people in the department at the end of August, with the distribution of vouchers that families can exchange for food in local shops. Faure said there was a need to expand the operation to other parts of the country where the government is struggling to respond, but that there was “a critical lack of funding” due to high-profile emergencies in other parts of the world and Bolivia’s status as a lower middle-income country. “[For] the emergency operation, there were no donors interested to support at all,” said Faure, explaining that WFP has been relying on its core funding to cover the operation.

Bolivia’s varied climate and topography, and high levels of poverty make it particularly vulnerable to climatic disasters, which have become more frequent in the past decade. In addition to climate change, high levels of deforestation have affected rainfall patterns and the risk of flooding, while a mining boom in recent years has put pressure on aquifers – groundwater sources that are vital for both drinking supply and for agriculture. According to a 2014 report by Cochabamba-based research institute CEDIB, the water-intensive mining sector uses 108 million litres of water per day, nearly four times more than the entire city of Oruro, which has a population of 265,000.

Although mining companies are supposed to seek approval from the authorities before accessing water, unregulated extraction of groundwater is common. Many mines also fail to properly treat wastewater, contaminating water sources.

“There is a gap at national level in terms of having an effective control, and having a census of companies which are illegally causing water shortages,” said Rodrigo Meruvia Soria of Cochabamba-based environmental NGO, Fundación Gaia Pacha.

Marcela Olivera, Latin America coordinator at Food and Water Watch, said the government response so far indicated that it didn’t want to tackle the issue of excessive water consumption by mining companies head-on because of the sector's economic importance. “They are putting a band aid on it with solutions like looking for new sources of water,” she said.

The government has responded to the crisis by drilling new wells and sending sacks of basic goods such as sugar and flour to families in the worst-hit areas. Soria said that in places like the Cochabamba town of Santivañez, where emergency food aid is being distributed, there has been no attempt to provide longer-term solutions to the problem. “The families weren't given seeds or technical support,” he said. “It was an effective management of food distribution, but in terms of preparing for a disaster like this, it has been incomplete.”

Given the availability of weather forecasting, Soria questioned why the government wasn’t better prepared. “The El Niño prognosis was made two years ago,” he said. “The risk management has been very deficient on all levels: national, departmental, and municipal.”

A lack of government investment in public water systems has contributed to the drought crisis, said Olivera. In cities such as Cochabamba, large amounts of water are lost to poorly maintained, leaky pipes while many rural areas have never had piped water systems and either rely on wells or rivers and streams – many of which are under threat of contamination by mining activities.

Driving across the chilly Altiplano Mountains from Puñaka to Poopó, a steady rain sets in, leaving a sheet of mirror-like water on either side of the road. Some welcome respite? Perhaps, but it will take more than the odd shower to recover the lake that gave the Urus their way of life.

(TOP PHOTO: Abdon Choque Flores looks out on what remains of the Desaguadero River​. Amy Booth/IRIN)