MANAHAT, TIMOR LESTE
Farmers in Timor Leste call the months from November to February “the hungry season”, and this year could be even worse than usual thanks to poor harvests related to the weather phenomena El Niño and La Niña.
By November, farming families in Timor Leste tend to have eaten or sold all their produce. They’ve planted new crops with the rains, but they must wait until the next harvest is ready in March or April.
Many of the country’s 1.2 million people are already chronically hungry. Timor Leste was ranked the second hungriest country in Asia by the International Food Policy Research Institute, which released its annual Global Hunger Index Tuesday. It was the ninth on the list globally, on par with war-torn Yemen and Afghanistan.
The problem will likely be worse this year, after El Niño hit the country in 2015 and 2016, bringing drought that killed crops. That weather phenomenon is often followed by La Niña, which can bring heavy rains and landslides, prevent planting and wash away crops before they have a chance to grow.
The US National Oceanic and Atmospheric Administration said in August there is a 40 percent chance that La Niña will hit Timor Leste next month.
That would be devastating for farmers like Herman Pereira, who is the chief of Manahat, a village of about 70 households on the western frontier with Indonesia. He pointed to the nearby mountains, and said that in good years villagers take their crops across the border to sell. But this year, there’s nothing left to peddle.
“Our cassava and corn did not grow well, the plants died from the top and the papaya leaves fell off,” said Pereira.

Farmers throughout the country are facing the same difficulties, according to an El Niño assessment commissioned by the NGOs Plan, CARE, Oxfam, World Vision and Caritas.
Published in February, the assessment said that 70 percent of Timor Leste's citizens are subsistence farmers. Of those surveyed, 72 percent were experiencing a long dry season, 56 percent had delayed plating crops, 80 percent did not have water for their gardens, and 55 percent of families had reduced the number of meals they eat each day.
And while the past year has been tougher than most, food security is a constant issue for many Timorese. 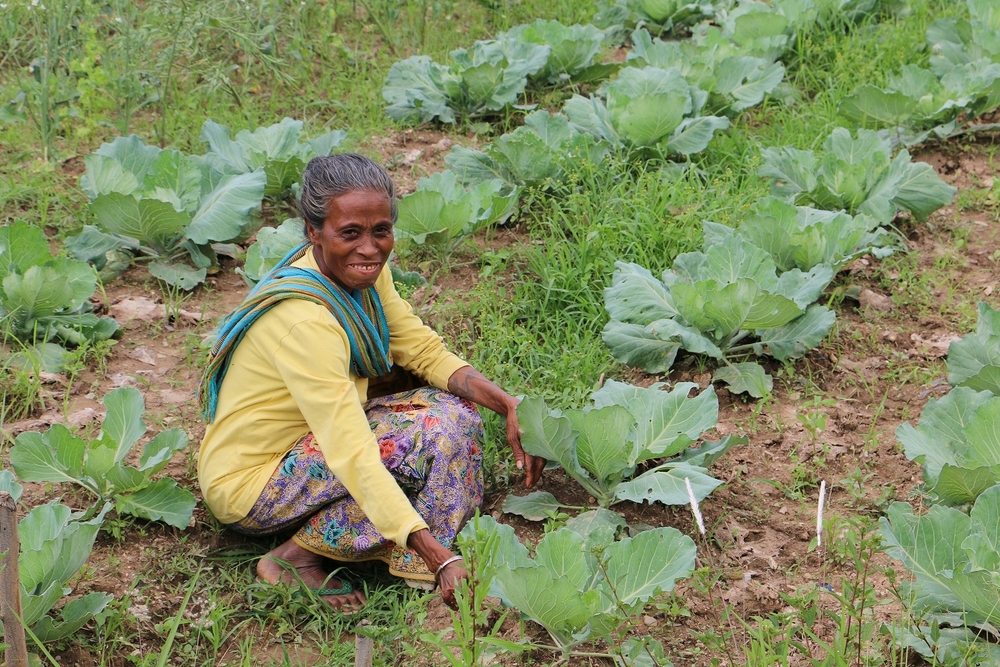 Wendy Levy/IRIN
Elsa Da Arujo tends her crop at Hkhmor, Timor Leste
About half of the country's children under five have stunted growth, according to the Global Hunger Index.
Heather Grieve, a nutritionist with the Australian government’s aid program in the capital of Dili, told IRIN that children with stunted growth also suffer from developmental delays.
“It’s partly reflected in the diet,” she explained. “They don’t have the range of foods needed, no diversity. They eat lots of carbohydrates, rice, maize, small amounts of vegetables and very little protein.”
Stephen Kearney, country director of the UN’s World Food Programme in Timor Leste, said aid agencies are working with the government to change that.
"Our challenge with nutrition is how to get people to change their eating habits,” he said. “We need to get people to recognise that a diverse diet is good for them."
WFP is running supplementary feeding for the most vulnerable women and children in some areas, using a local soya bean product, Timor Vita. 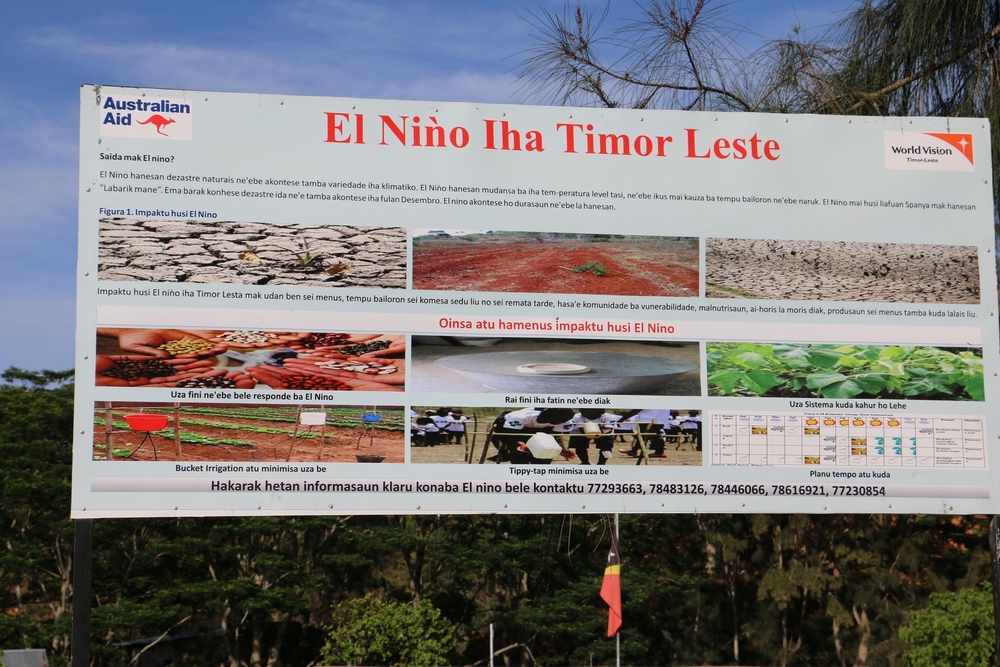 Wendy Levy/IRIN
Campaigns to raise awareness of the effects of El Nino included information boards in public spaces
But there is widespread concern among aid workers that the government is not doing enough to address the current crisis brought on by El Niño.
“In any other country, Timor’s anemia rates alone would suggest blanket supplementary feeding for women and children,” said one aid worker, speaking on the condition of anonymity.
Both President Taur Matan Ruak and Prime Minister Rui Maria de Araujo support “action for zero hunger”, a plan that includes campaigns for healthy eating, taking key messages to villages, and provides funding a nutrition prize.
But the government has stopped short of declaring a disaster, which could trigger the release of extra international funds for emergency support.
“It has not been declared a disaster here,” said another aid worker. “Everyone was thinking that the government was going to do something.”
IRIN’s attempts to get comment from National Disaster Management Office were unsuccessful. A representative did not show up for a planned interview or answer phone calls.
wl/jf/as
(TOP PHOTO: These farmers are part of a cooperative that won a nutrition award from the Timorese president. CREDIT: Wendy Levy)
Share this article
Join the discussion