In Myanmar’s Rakhine state, even food is political.

Sectarian tensions have simmered for decades here on the country’s western frontier with Bangladesh, and they exploded with deadly violence in 2012 when mobs of ethnic Rakhine Buddhists drove minority Muslim Rohingyas from their homes. Four years later, about 120,000 people remain displaced and, with hostilities as high as ever, the government is struggling to help them return home.

So when a government programme gave 22,000 displaced Rohingya US$1,000 cash grants to rebuild stilted, thatch-roofed homes, the move was greeted with cautious optimism. The UN’s refugee agency, UNHCR, hailed it as a “first step towards ending displacement” in a May press release.

It was a halting first step at best since most of the beneficiaries of the programme had already been living in or near their original villages, rather than in the squalid camps for internally displaced people around the state capital, Sittwe.

And the UN’s World Food Programme now faces a dilemma: When they were IDPs, the Rohingya received food rations; now that they are back in their homes, rations have been cut as the WFP wants to wean them off aid to make their communities more self-sufficient. But they still live under an apartheid-like system that severely restricts their ability to work.

So the Rohingya are hungry. But many of their ethnic Rakhine neighbours are too, as are Rohingya living nearby who were never displaced. The WFP risks stoking resentment if it keeps providing rations to the former IDPs.

Sum Muhammed, a 31-year-old local medic, spent four years living in a tent in the In Bar Yi community in Kyauktaw township after almost all the houses in his village were torched in the 2012 riots. Now he’s back home, but he and other returned Rohingya are struggling to feed themselves.

“In one family, maybe we need three cans of rice [per day], but we can only cook one and a half or two cans,” he said. “We are not full. It’s a big difference. We feel weak.”

He lost his food rations in July. Before that, the WFP had been providing each IDP with monthly rations of rice, beans, oil and salt. Now, only those identified as especially vulnerable—the elderly, disabled, orphans, and single mothers—are receiving rations, while children are receiving a soy nutrition supplement.

The problem is, even able-bodied Rohingyas like Muhammed can’t find employment.

Before the violence broke out in 2012, residents of the village were still desperately poor, but could move around the township looking for daily work as labourers or on plantations.

“Now we go fishing in the river behind the village, but we cannot go to the other side,” Muhammed said. “There is no other way to make money. If there were no restrictions, we’d be happy, because we could work.” 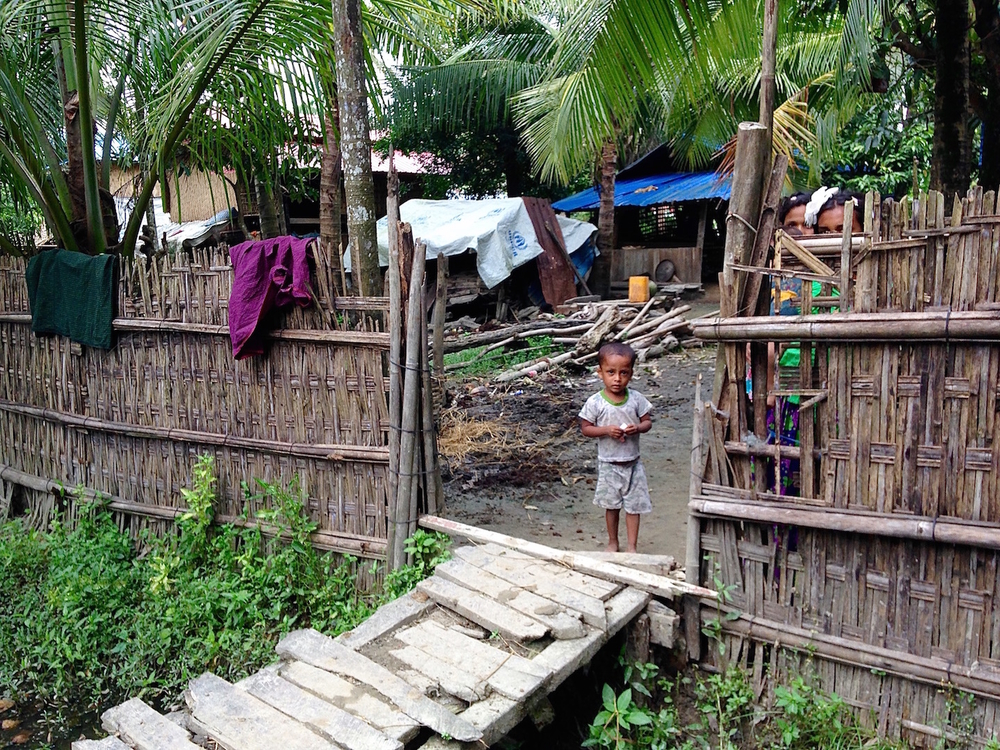 The movement restrictions Muhammed referred to were imposed during half a century of military rule when the rights of Rohingya – including citizenship – were gradually stripped away.

Many in predominantly Buddhist Myanmar consider the Muslim Rohingya to be interlopers from neigbouring Bangladesh, despite the fact that some of them have ancestors who lived in the area centuries ago. Other Rohingya families have been there for generations, having migrated around the region both before and after the British drew an arbitrary border across it when they conquered part of what was then known as Burma in 1824.

Since the violence in 2012, the restrictions have been even more strictly enforced.

The food cuts raised an outcry among aid groups and activists, who warned they would lead to widespread hunger in communities not yet ready to fend for themselves because of the restrictions they face.

Laura Haigh, a researcher with Amnesty International who recently visited some villages affected by the ration cuts, said that removing  food aid while movement restrictions were still in place puts vulnerable communities at even greater risk.

“We have spoken to a number of people in villages affected by the ration cuts and all are worried about how they will support themselves and their families,” she said.

While there have been anecdotal reports of extreme hunger among some of the returned Rohingya, most of the villages affected by the cuts are remote and difficult for aid groups to access.

The International Rescue Committee and the Danish Refugee Council had asked the WFP to delay the cuts for six months until a food security assessment could be carried out, but to date there has still not been a full survey of food security in the affected areas, raising questions about the process the WFP used in deciding to cut aid. A WFP strategy document on the food cuts obtained by IRIN says only that the decision was based on a “rapid livelihood assessment” carried out in January.

The document noted that around 1,950 IDPs in Pauktaw township were refusing to return home because they were afraid that if they did, their food assistance would stop.

Representatives of WFP said in emails that the organisation is flexible and “ready to assist if needs may be identified.” They added that as many as 12,000 people identified as vulnerable were still receiving full rations, and that a more comprehensive food security study was ongoing and would be completed at the end of October.

In the meantime, the returned Rohingya do what they can to stave off hunger. Residents of Pa Rein village in Mrauk U township said they were borrowing rice from local farmers, making it into a watery gruel, and supplementing it with bamboo stems when they could.

The group had gathered to discuss their situation in the small upper story of a newly rebuilt house. It was clean and solid, but stiflingly hot.

“Now we have homes, but we need money to buy rice and we don’t have money,” said Oli Armouk, as he and the others fanned themselves with scraps of WFP ration boxes.

(TOP PHOTO: Rohingyas who were displaced by violence in 2012 stand outside their newly-rebuilt home in the village of In Bar Yi. CREDIT: Julia Wallace)