Everyone knows everyone else in the village of Vavyloi on the Greek island of Chios. Such intimacy had long meant an absence of crime and a feeling of security. That all changed about a month ago when farmers noticed onions and potatoes being gouged out of their fields overnight. When the house break-ins started, the villagers began forming four-man night patrols.

“We take a piece of wood or plastic piping. We’re not trying to hurt them; we’re trying to deter them,” said Yannis Siderakis, the village mechanic. He was referring to the hundreds of refugees and migrants camped a mile away at a bankrupt aluminium moulding plant known by its acronym, VIAL.

Purchased by the municipality last year to serve as a refugee shelter, VIAL’s cavernous concrete nave and an adjoining fenced-in area of mobile housing units were meant to become a locked-down facility for processing asylum claims – a so-called ‘hotspot’ – when the EU’s agreement with Turkey came into force in late March.

Six months later, there are 3,800 migrants and refugees on Chios, three times the number VIAL was designed for. All are free to move around the island.

“On our first night out [on patrol], I bumped into a thief,” said Siderakis. “I saw a black man running with plastic bags. I shouted at him; he dropped the bags and ran. I didn’t chase him. He had broken into a house and taken spirits, women’s cosmetics, an iron, slippers, socks – not valuable things, but he turned the place inside out. The owner was in shock.”

There are similar stories in Chios town, where the spillover from VIAL has spawned two tent cities. “We were robbed once. They took a bottle of whisky and a bottle of cognac. Next door, they took beers,” said Adamantios Frangakis, the owner of a café around the corner from the town hall.

The EU-Turkey agreement has changed views on migration here. While refugees were transiting through the islands on their way to the Balkans throughout the summer of 2015, islanders offered them food, clothing and assistance. But now that they are a stationary and growing population, the strains on local resources are showing.

Under the deal, in exchange for six billion euros from the EU over two years and a pledge from Brussels to relax visa rules for Turkish nationals, Turkey was to prevent as many refugees from setting out from its shores as possible, and readily readmit those caught on its territorial waters. Turkey also agreed to accept refugees and asylum seekers returned from Greece, on the basis (disputed by rights activists) that Turkey is a safe, third country. The deal appears to have had the desired effect. Arrivals to Greece so far this year have reached 166,000, compared to 385,000 by the end of September 2015.

But the deal has also turned Greece’s eastern Aegean islands into holding centres. Those rescued by the Hellenic Coast Guard are shipped to the islands of Lesvos, Samos, Chios, Leros, and Kos, and confined there until their first asylum interview has been conducted. Depending on the outcome, they are either given permission to complete the asylum process on the mainland or deported back to Turkey. But so far, just 509 people have been returned to Turkey under the deal and there are now some 14,000 refugees on the islands, overwhelming facilities built for half that number. More arrive nearly every day.

“The EU-Turkey deal has limited flows [of refugees], but it is destroying the economy, destroying the sense of security, and as a result destroying social cohesion,” Chios Mayor Manolis Vournous told IRIN.

Overcrowding and increasing frustration among the refugees was one factor that sparked last week’s riot and fire at the Moria hotspot on Lesvos. Tensions are also building on Chios, where Vournos described islanders and refugees as fellow inmates. “[Refugees’] confinement is not really administered,” he told IRIN. “It’s simply the island’s natural boundaries. Water is the barrier. But that also includes [the] 50,000 people of Chios.”

Marios and several other Syrian refugees have been sleeping on the floor of the island’s small municipal theatre. A makeshift curtain of blankets hangs on a rope, separating the men from an area for women and children.

“Conditions here are awful,” he told IRIN, readily admitting that people are so desperate that they are learning how to steal. “I’m a person who knows how to do a dozen different things… I would go to work in the fields for as little as 15-20 euros a day just to be able to buy cigarettes.”

“We know the people of Chios aren’t to blame, but neither are we,” said Marios. “Do they want us to leave? Give us our papers and we’ll go today. Do they want to deport us? Deport us and let’s have done.” 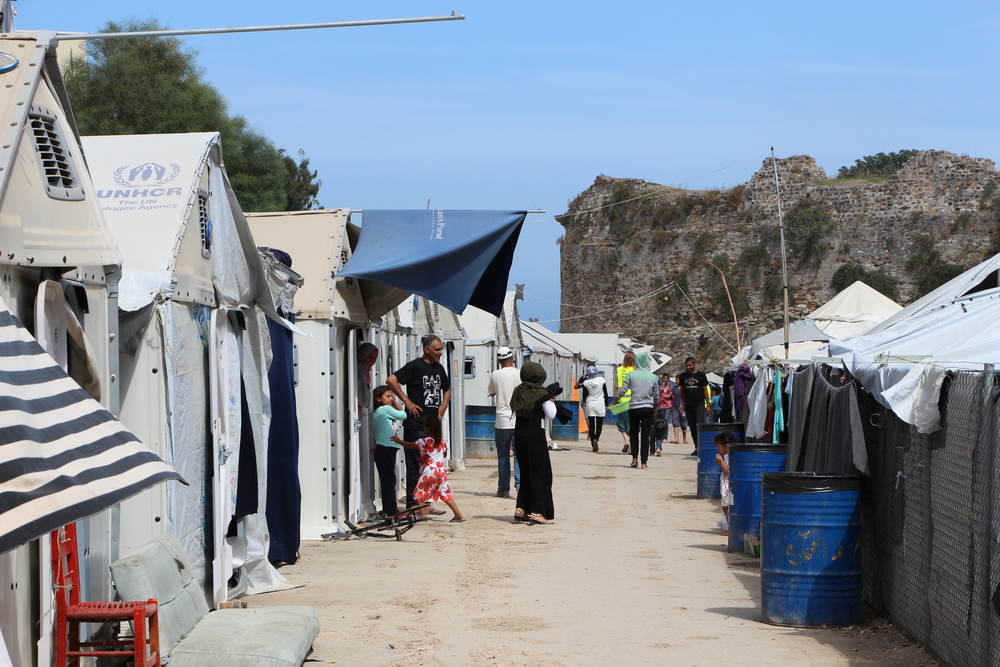 Asylum applicants are allowed to work, but small island economies don’t provide enough opportunity for thousands of outside labourers; and Greek unemployment now stands at 23 percent – the highest in Europe.

The economy of Chios has suffered setbacks unrelated to the migrants. Tourism has been falling, as measured by airport arrivals, from more than 16,000 eight years ago to just over 7,000 in 2015. Also this year, a fire devastated its mastic tree plantations. Mastic sap and its byproducts have been Chios’s signature export since Ottoman times.

Fears about security and economic pressures have contributed to heated discussions about where to house the refugees. After a stormy municipal council meeting last week, Vournous was forced to evacuate the municipal theatre. Eventually, he also plans to evacuate the second tent city in town and create a large camp at a former landfill, which has been re-landscaped but still lacks water and electricity.

Moving the refugees out of sight might give some island residents a little peace of mind, but it won’t solve all the problems their presence creates. Vournous is furious that the Greek Asylum Service isn’t processing people off the island faster. “The EU and Greek authorities aren’t doing their job,” he said. “Who is measuring their effectiveness?”

The European Asylum Support Office declared its intention to send 700 caseworkers to Greece after the March deal. So far 200 have arrived: only 126 are on the islands, and just 20 are conducting interviews.

Part of the problem is that EASO can’t oblige EU countries to contribute caseworkers. “We have asked for more staff from the member states,” said EASO spokesman Jean-Pierre Schembri. “[But] they are under pressure in their own country if you look at the backlog in the EU member states, which is over 1.1 million cases.” Eighteen mobile interview units stacked up inside the VIAL hotspot amply illustrate EASO’s frustrated ambition. Only a few of them are in use.

“Every day the islands receive an average of 120 fresh arrivals and no more than 50 asylum applications are adjudicated, while another 9,000 languish in the queue,” said Christiana Kalogirou, prefect of the North Aegean region. “That is why the critical issue is the staffing of the asylum services.”

Pressure on the islands could have been relieved. A year ago, EU members agreed to relocate 160,000 asylum applicants from Greece and Italy. But only 4,776 relocations have so far taken place from Greece, a performance the UN’s refugee agency, UNHCR, called an “unnecessarily slow” implementation of a “woefully inadequate” pledge.

Vournous believes the EU should make amends by offering the islands of the eastern Aegean some form of development assistance. “That’s the least it can do because I am carrying out its policy to prevent Germany, Italy, Austria, Hungary, and Spain from flooding with people,” he said. “I would expect it to help me develop the economy, to show that we won’t always be a frontier post; but it has no wish to do this.”

(TOP PHOTO: A Syrian girl looks out of the doorway of her family's tent at the Souda camp in Chios town. John Psaropoulos/IRIN)