When Mikhail and his girlfriend were living in rebel-held eastern Ukraine, they were afraid for their lives every day. But not just because of the shelling.

“We could easily get shot just because we were drug users,” said Mikhail, who did not want to give his last name.

When the rebels closed down a centre where he had been receiving drug substitution therapy for his addiction, he returned to using. In September last year, he and his girlfriend decided to leave in the hope of restarting the treatment in a government-controlled area. This meant passing through a rebel checkpoint, where they were told to explain their reasons for leaving. The rebels responded by ordering them onto their knees where they remained for hours before being told to lie on the floor.

“We spent several hours on the ground with the guns of the rebels pointed at us,” said Mikhail.

Eventually, they were released and reached the government-controlled town of Sievierodonetsk, where they were helped by social workers and encouraged to test for HIV. They both tested positive.

NGOs are warning that HIV infections are on the rise in eastern Ukraine, where nearly two years of conflict between pro-Russian separatists and government forces has hit prevention and treatment efforts.

“More babies [are] born that are HIV-positive and more people are dying from HIV [related illnesses] compared to before.” said Oleg Pronin, executive of the board of the Luhansk regional branch of the Ukrainian NGO, People Living With HIV, which is based in government-controlled territory and partners with UN's refugee agency, UNHCR.

Even before the conflict, Ukraine had one of the highest rates of HIV infection in Europe. According to the World Bank, 1.2 percent of Ukrainians aged between 15 and 49 were infected with HIV in 2014.

About 30 percent of new infections were in the Donetsk and Luhansk regions, now partially under rebel control, where tuberculosis – a common opportunistic infection in people with HIV - is also a major health problem.

Due to the lack of data being gathered in rebel-held areas, there are no official statistics to support the anecdotal reports by NGOs that HIV infections are on the rise.

Reports from the ground

On World AIDS Day on 1 December, a group of NGOs partnered with the government to offer HIV testing at train stations throughout government-controlled Ukraine. According to preliminary results, out of 544 people who were tested, three percent were HIV-positive.

“It was much higher than we expected because generally… not more than one percent of the adult population [has] HIV,” said the policy director for the Alliance for Public Health, Pavlo Skala.

Based on his organisation’s contact with clients and with groups in rebel-held areas that are working with people who are HIV-positive, Pronin estimated that the number of people infected with HIV in eastern Ukraine may have doubled. 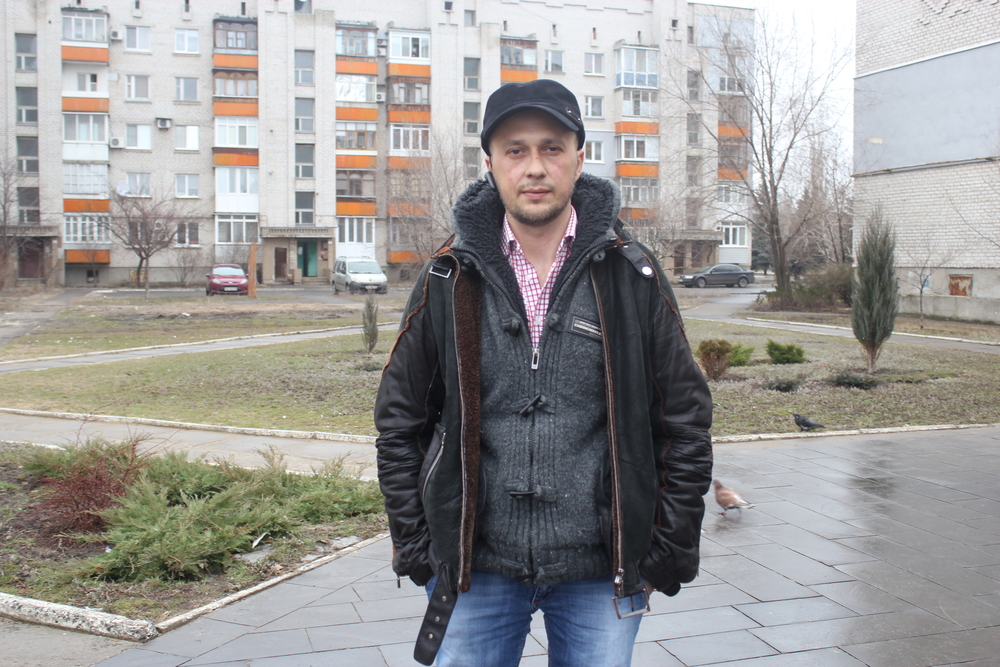 Kristina Jovanovski/IRIN
Oleg Pronin of local NGO, People Living With HIV believes the number of people infected with HIV in eastern Ukraine may have doubled

One reason may be that sex workers and fighters on the frontlines struggle to access condoms, which are either expensive or unavailable, said Rudneva.

Some NGOs are supplying condoms to fighters, but Andriy Poshtaruk of the United Nations Population Fund warned that their efforts were not enough.

“If you want [condom distribution] to be sustainable, we have to make sure it’s part of the government procurement system… unfortunately in Ukraine we still don’t have that system,” he told IRIN.

Not only are fighters and sex workers at risk, but also the partners of fighters when they return home.

“We are not isolated from each other… We think that the whole [of] Ukraine will be affected,” said Rudneva.

Another factor behind the likely increase in HIV infections is that many rehab centres have been closed down in rebel-held areas. With syringes either inaccessible or too expensive, drug addicts have resorted to reusing needles or sharing them. According to government statistics, about 70 percent of HIV infections in Ukraine were sexually transmitted in 2014 while transmission resulting from sharing needles accounted for most of the remaining 30 percent of infections.

Worries about a rise in new infections come amid a breakdown in the health care system in eastern Ukraine due to the war. Some hospitals have been damaged by shelling, while many staff have left conflict-affected areas, making it more difficult for people to get tested or treated for HIV-related illnesses.

“These are people with very weak immune systems… apart from ARVs (antiretrovirals) – a constant supply of ARVs that they have to take – they have to receive good overall health care,” said the UNFPA’s Poshtaruk.

In one case, said Rudneva, a tuberculosis hospital in rebel-held Luhansk that was treating many HIV patients was hit during the fighting. Staff and patients were warned beforehand so they were able to leave, but no one knows where the patients have gone. Interruptions in TB or HIV treatment can lead to people developing drug-resistant strains of the disease that can then be passed on to others.

Doctors in rebel-held territory are already dealing with an increased prevalence of drug-resistant TB, according to Pronin.

At the start of the conflict in 2014, ARVs were only available in the city of Luhansk, which was inaccessible at the height of fighting. Although the drugs are now more widely available thanks to the efforts of NGOs and aid agencies, the disruption in treatment has caused lasting complications for many people.

Evgeniy, who also preferred only to give his first name, had been living with HIV for 16 years and was getting ARVs in his hometown before rebels took over the area and the hospital closed down.

“Nobody provides supplies there and [the] Russian federation doesn’t… ship medication to these areas,” he said.

After contracting TB, Evgeniy decided to leave the rebel-held area in October 2015.

Pronin said that while anti-retroviral drugs are more accessible in rebel-held areas now, there is a shortage of diagnostic equipment for measuring viral load and CD4 count, which are crucial for the provision of successful treatment.

Pressure builds on government side

Increased demand from HIV-positive patients who have fled rebel-held areas is now putting pressure on health services in government-controlled areas of eastern Ukraine.

According to Rudneva, government funding to provide treatment and support to so many new patients is lacking.

Oleksandr Yurchenko, head doctor at a Kiev hospital housing an HIV/AIDS centre, confirmed there was a shortage of government funding for ARVs last year, partly as a result of so many new patients arriving from rebel-held areas of the east. He said there was currently enough medicine to last for two months but no guarantees there would be enough in six months’ time.

Mikhail is one of the lucky ones. Through the People Living with HIV NGO, he was able to get psychological help and restart substitution therapy for his drug addiction at a government-run centre in Sievierodonetsk, where he now lives. He said his health has improved and he’s gained some weight back. For those stuck in the rebel-held east, the outlook is not so good.

“It’s hard to live in such conditions,” he said. “Half of the pharmacies are closed [and those that are open] don’t even have the most basic medication.”