In Geneva last week, hopes of a Yemeni peace deal quickly evaporated as it became clear that the gaps between the warring parties were as wide as ever. Representatives of the Houthi rebels and the government of Abd Rabbu Mansour Hadi seemed more intent on pointing fingers than seeking measures to protect civilians and ensure badly needed humanitarian assistance is delivered.

As the days went by the talks became ever more bitter before descending into farce when a shoe was thrown at a senior Houthi, leading to a fistfight in the middle of a press conference. The one thing that seemed to be nowhere near the top of anyone’s priority list was ending abuses against civilians in the conflict.

Last month, I caught a glimpse of the scale of civilian suffering as I shared an extraordinary journey out of Yemen with those fleeing the war.

I’ve been working on refugee rights since 2009, but on my way back from Yemen I experienced first-hand the initial steps desperate people take when they make the hard decision to flee their homes, not knowing what is in store for them, with just what they can carry on their backs.

I had been in Sana’a, Yemen’s capital, during the brief ceasefire between the Saudi Arabian-led coalition and the Houthi armed groups. Although it wasn’t well respected outside the capital, the five-day lull in fighting was still a badly needed respite for many civilians caught between the coalition and their local supporters on the one hand and the Houthis, their aligned militias and troops loyal to former President Ali Abdullah Saleh on the other.

A Saudi-led coalition of at least 10 countries began bombing the Houthis on 26 March after the northern rebels tightened their grip on Sana’a, eventually forcing Hadi to flee to Aden first and then Riyadh.

In the weeks since, all sides to the conflict have perpetrated rights violations. There have been inadequate precautions to protect civilians, who have faced indiscriminate attacks. The Houthis have also arbitrarily targeted and detained opposition activists and journalists. Saudi-led restrictions have denied life-saving assistance and basic goods needed for civilian survival, including fuel.

Millions of Yemenis are now without food, and according to the United Nations over 1,400 civilians have been killed and another 3,400 injured.

The increasingly dire humanitarian situation in the country has led to a new refugee exodus from Yemen to nearby countries such as Djibouti, Somalia, and Oman.

This is all happening in what is near to a total news blackout. Reporting in Yemen is disrupted by detentions, the blocking of websites, and the seizing of media offices by the Houthis. What does get reported is often not received within Yemen itself due to the lack of electricity and poor communication systems.

The Saudi-led aerial bombardment, which has rendered Yemen’s airports largely inoperable, has also made it difficult for journalists and others to access the country.

While humanitarian organisations have been able to schedule some flights and ships in to transport aid workers and assistance, their ability to do so is severely limited.

Given the restrictions on access and the challenges of working in a conflict zone, we knew it was all the more important to have our staff on the ground when at all possible. With the ceasefire and our research mission over though, I needed to begin the circuitous journey home. 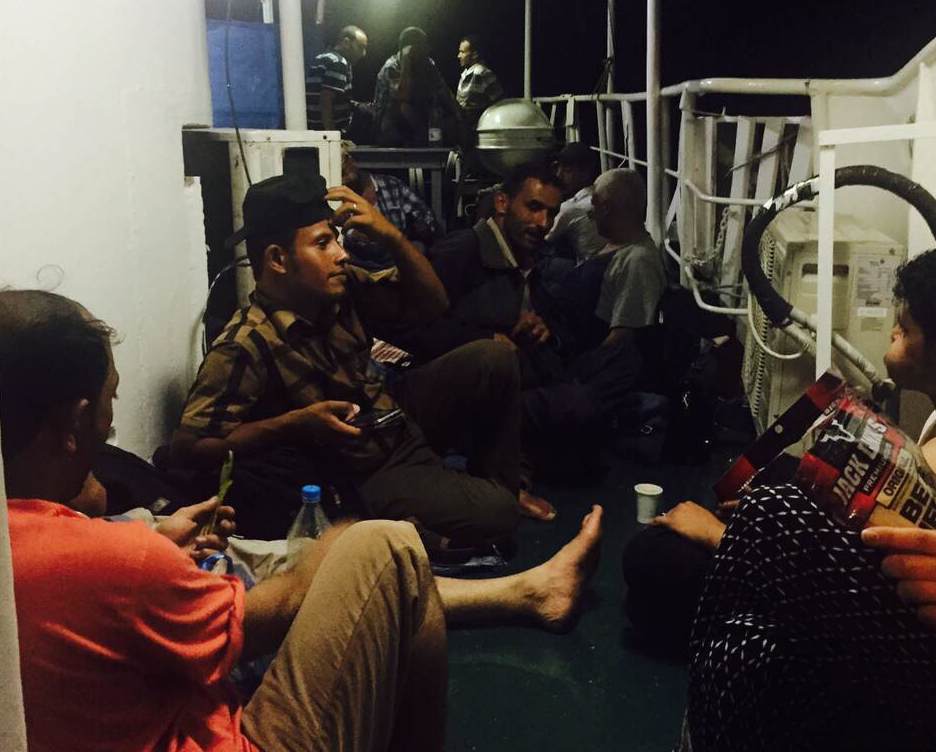 I had few options. With no commercial flights running at the time and no safe route out overland, I did what many Yemenis found themselves doing: I purchased passage on a boat. The ship, the captain told me, was making its first trip with refugees from Yemen to Djibouti. Previously, it was used to carry cattle from Somalia to Yemen. The 50-metre vessel was carrying more than 400 refugees and everything they could carry.

We set off in the middle of the night on our 20-hour journey to the port in Djibouti city. Families, some with young children, elderly couples, young men travelling in groups: they all found space, and some comfort at least, on the deck and lower level of the ship. Many of them showed me kindness, sharing food, being generous with the little room they had. There was singing at times, and laughter too, but also apprehension.

When we docked in port, Djiboutian officials and Red Crescent workers greeted us, handing out water and fruit to the weary travellers and passing on reassuring words.

I wondered what would happen to my fellow passengers next. Passports were being processed and those that needed shelter would be taken to a refugee facility, I was told.

One young man asked an immigration official how he could check on his application to enter the United States. For many of the refugees, Djibouti was clearly not their final destination, only one of an unknown number of stops as they journey to somewhere strange and foreign that might one day be called home.

For civilians who remain back in Yemen, the war rages on, whether or not the world is watching.